In the video above, Bioware goes over combat, skills, weapons, movement and more in Mass Effect Andromeda.

According to the developer, action is built around "fluid, fast-paced, third-person combat." Players will have complete freedom of movement thanks to the jump-jet. This handy piece of equipment allows the player to jump, evade, and hover during battle.

The game also features a new cover system which provides a "seamless" way to use almost anything as cover.

Firearms are divided into four categories: assault rifles, pistols, shotguns, and sniper. Each provide the player with a variety of means to dispatch enemies. Close combat players will likely prefer shotguns and pistols, assault rifles work well on the move, and sniper firearms do the job from afar.

Melee weapons for close combat will vary in both damage and speed. Hammers do max damage, shivs and swords are faster and provide the player enough opportunity for a precise hit before getting out of the way in a quick manner.

Since there aren't any class restrictions, players are able to switch between loadouts.

Weapons and gear are based on three technology types due to the location in which they originated. According to Bioware, weapons from the Milky Way Galaxy use physical ammunition similar to the previous three games - only with advancements.

Weapons from the Milky Way are more high-impact and projectile-based. Players will find these work best on non-shielded targets, but they will need to keep an eye on their ammo output. With Remnant weapons don't require ammo as they use beams, but they will overheat. They player will need to allow a cooling period to use it again once it reaches maximum heat. 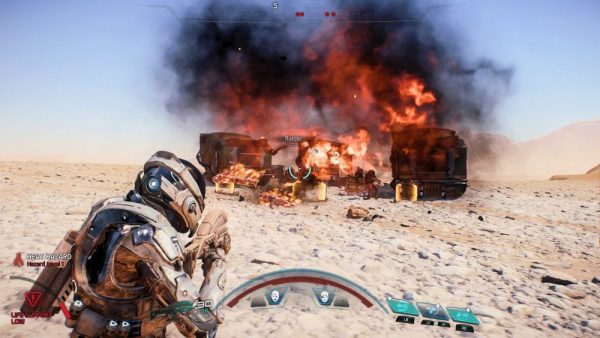 Weapons featuring tech from the Heleus Cluster of the Andromeda galaxy are plasma-based and feature heat-seeking tech. Others from this region are charge-based, so the longer they are charged, the harder the hit.

As with weapons, there are no restrictions on skills the player can choose. Each of the three main categories are "designed to facilitate a certain style of play." These are: Biotics, Combat and Tech.

Biotic skills provide the player with the power to control dark energy which manipulates mass and gravity. Skills such as Pull and Throw can grab enemies on the battlefield to use as shields or even weapons.

Combat skills focus on improving weapon damage and accuracy, and enable the use of flak cannons, grenades, trip mines, and more.

Finally, the Tech skill provides the ability to use experimental weaponry, or make strategic improvements. For example, the Cryo Beam and Flamethrower "offer more offensive punch," while the skills Invasion and Energy Drain weaken opponents to make them easier to kill. Players can also deploy an assault turret.

All skills can be upgraded and have different upgrade paths for playstyle customization. Since all enemies have specific strengths and weaknesses, so the different skills and abilities available will be an important factor.

Mass Effect: Andromeda releases for PC, PS4 and Xbox One March 21 in North America and March 23 in Europe.