With the use of your capture net, you can get yourself some cute little pets - and with a little more gear you can even capture larger monsters instead of killing them, getting better rewards in for the bargain.

While fighting big, bad monsters will take up a lot of your time in Monster Hunter World, killing isn't always your only option. For one there's a lot of little monsters out there that you shouldn't neglect, and one of the best things about Monster Hunter World is that you can capture some of the smaller wildlife like birds and insects to be pets back in Astera. As for those larger monsters - you can capture the boss monsters too, and bringing them in alive will get you quite a significant boost to your mission rewards.

Capturing works in two ways. In Monster Hunter World you unlock pets by capturing them with the capture net. The capture net is an item you'll have from the moment the commission first sets you up with your gear in Astera, so you can get to capturing little creatures from pretty much the first moment you venture into the Ancient Forest properly.

If you want to capture the larger monsters, you'll need a few key items - most notably a Tranq Bomb and something to stun a monster to give you a chance to knock them out cold. On this page, we get into both: how to capture pets and how to capture monsters to bring them in alive. If you need more general help with Monster Hunting, be sure to check out our full Monster Hunter World Guide. Now - capturing beasties! Let's dive right in, shall we? 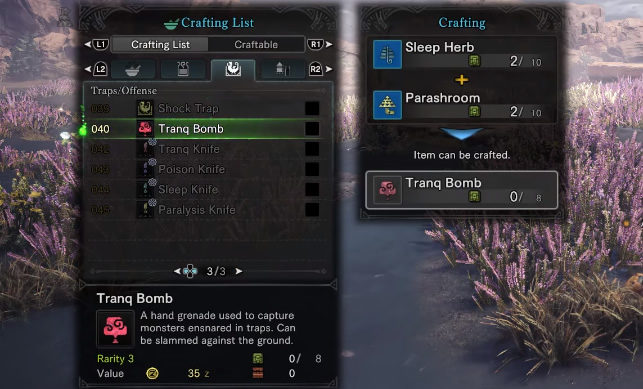 How to Capture Large Boss Monsters in Monster Hunter World

While some of them may look way too big to actually bring in alive, it's actually possible to capture the larger boss monsters you'll find out in the various zones of Monster Hunter World. In fact, capturing monsters is actually an alternative way to complete quests that tasks you with hunting and killing a monster: and bringing monsters in alive also gets you extra rewards in the form of loot materials and research points. Some other investigation side quest missions will require you capture, too.

To capture, we're first going to need a few specific items: a trap to hold the monster in place, and tranquilizers in order to knock it out cold so you can high-tail it out of there with the monster still breathing. You can get a lot of different types of these things, but generally speaking you want to look for items with the Tranq prefix for tranquilizers and the Shock prefix for things that can stun a monster.

For our example, we're going to use a Tranq Bomb and a Shock Trap. Let's say we're out to catch a Kulu-Ya-Ku (as Arekkz does in the video below), one of the many monsters in Monster Hunter World that's found in the Ancient Forest. Here's the step-by-step of what we need to do:

First, we need the items. You can find these in the store, you can craft them or on missions that require you to capture a monster rather than kill it they'll be in the item box at the start of the mission. You need the following items:

For the sake of argument, make sure you've got a few of each item for safety. This goes doubly so if you're heading out on an expedition with designs on capturing. Make sure both items are on your quick-access menu so you can grab them with a quick press of L1/LB, too.

Next, head on out to find your monster. Track it as you normally would on a hunt. Once the Monster is tracked, engage it in battle as you normally would. Your aim is now to wound the monster significantly until it reaches a critical health state; you'll know this state well from other hunts, since it's when a monster starts to limp or show other signs of weakness, and many species will run and try to escape. Once it gets to that state, back off.

As an aside, any major damage done to the monster will persist when you catch it and return it to Astera and the commission. If you cut off a tail or a wing, that'll still be missing when you return it to camp. You can still loot and carve any amputated extremities, too.

Once the monster is in critical health, stalk it. Follow it and place your Shock Trap in a place where it can catch the monster. You could sneak up on it using the Gilie Mantle if it goes to sleep, but the easier thing to do is to place the trap somewhere and lure the monster to it.

Our advice for this is to place the trap and then aggro the monster again - attack it to make it come after you once more. Lead it a few steps to the trap, and once the Shock Trap hits and shocks the monster, it'll go down.

Now the monster is down, you'll need to act fast. Use the quick menu to switch to your Tranq Bombs. Immediately get up in the stunned monster's face and while it's shocked deploy the Tranq Bombs. Keep in mind that some tougher monsters might take several Tranq Bombs to knock out - which is why earlier we told you to bring a few with you on a mission or expedition!

When the Tranq Bombs take effect, the Monster will pass out entirely - and at this point the hunt ends in much the same way that it would if you were to complete it naturally. Congratulations - you've captured a monster! Once you get back to Astera you'll be able to see your newly captured charge in the North-West area of the map if you're so inclined.

That's how to capture the big guys - now let's talk about pets... 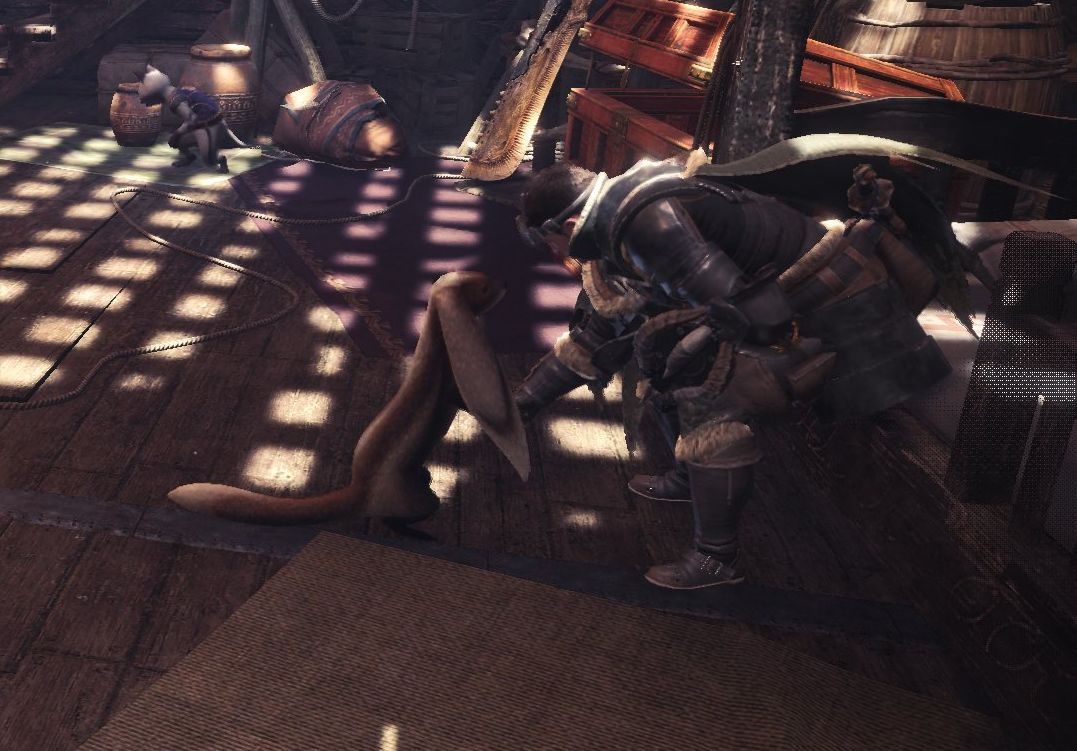 In order to use the capture net, hold L1 / LB to open up your menu and then use Square / X and Circle / B to sort back and forth through the items equipped on your item bar. Unless you've removed it from the shortcut bar using the method we describe in our Monster Hunter World beginner's tips guide the capture net will be found here, and then simply pressing Square / X will equip it properly - another press will unequip.

Once the Capture Net is properly equipped, it takes over your Slinger. That means your slinger ammo will be set aside for the meantime and you'll use L2 / LT to aim and R2 / RT to fire the net. The net is cast out in a wide way and is represented on Monster Hunter World's user interface by a big square. The net doesn't have enormous range, but it fires out in a different, broader way than slinger shots.

Monster Hunter World makes it all easier by ensuring that big square changes color whenever a monster is in range and ready to be captured when you fire. You'll have to be careful, though - a lot of little creatures spook when you get close, so remember you can sneak with a tap of X / A and remember that you can use the Gillie Mantle or long overgrowth to give yourself a stealthy edge.

When you capture critters, head back to your room in Astera and chat to your housekeeper - that's the Palico that isn't your personal buddy that you'll find in your quarters. That Palico will know about your capture and will allow you to place some of your captured creatures out into the room where they act as your pets. You can interact with them a little and your hunter will feed them and the like when you choose to rest in your room.

Capturing actual monsters - that's a story for another day...