A new schedule for Monster Hunter World events through the first week of April is now available, and you'll notice some quests are making a return.

Returning Event Quests include Chew the Fat, Ya-Ku With That?, and Flesh Cleaved to Bone.

Current quests this week are Ya-Ku With That?, Keeper of the Underworld, and Rollin' with the Uragaan. Monster Hunter World players have until March 22 to complete these quests.

Ya-Ku With That? is a special arena and in order to participate, players need to be at Hunter Rank 6 or higher.

Players with a Hunter Rank 16 or higher head over to the Confluence of Fates area, which is located inside the giant crystal in Elder's Recess. Those who have completed the quests Land of Convergence or A Light Upon the River's Gloom should be familiar with the area.

To complete the quest, players will need to slay Xeno'jiiva, which is currently the final boss in the game.

Rollin' with the Uragaan also takes place in Elder's Recess, and players at Hunter Rank 13 or higher will be hunting two Uragaan.

From March 22 through May 10, players at Hunter Rank 16 or higher should head over to the arena in order to battle the elder dragon Nergiagante. There are three Slay Events for this creature: two in the Arena, and one in the Special Arena. If you need some tips on taking down Nergiagante in Monster Hunter World, we're here to help.

Beginner and Intermediate Challenge Quests are also on the schedule. From now until March 29, the Beginner challenge for Hunter Rank 5 and above is taking place in the Arena. The goal is to slay all target monsters.

Players at Hunter Rank 13 or higher can take part in the Intermediate challenge from March 30 through April 5. Here, they will need to slay two Odogaron.

If you need some pointers on any of the monsters you'll need to slay to complete these quests, here's a list of strengths and weakness for some of the larger beasts. This list also includes Xeno'jiiva, so you'll probably want to give it the once over.

Once the main events outlined below end, players can participate in Monster Hunter World's first seasonal event. It's the Spring Blossom Fest and it starts on April 5 at 5pm PDT, 8pm EDT, 1am BDT (April 7). It ends on April 18 at the same times.

Players will be able to craft the Wyvern Ignition Great Sword, PlayStation 4 players who may have missed out on the Horizon Zero Dawn event will get another chance at it during the festivities.

The Monster Hunter World quest schedule can be looked over in the image above, but we've also outlined it below. If you click on the image and open in a new tab, it should zoom to full size for you. 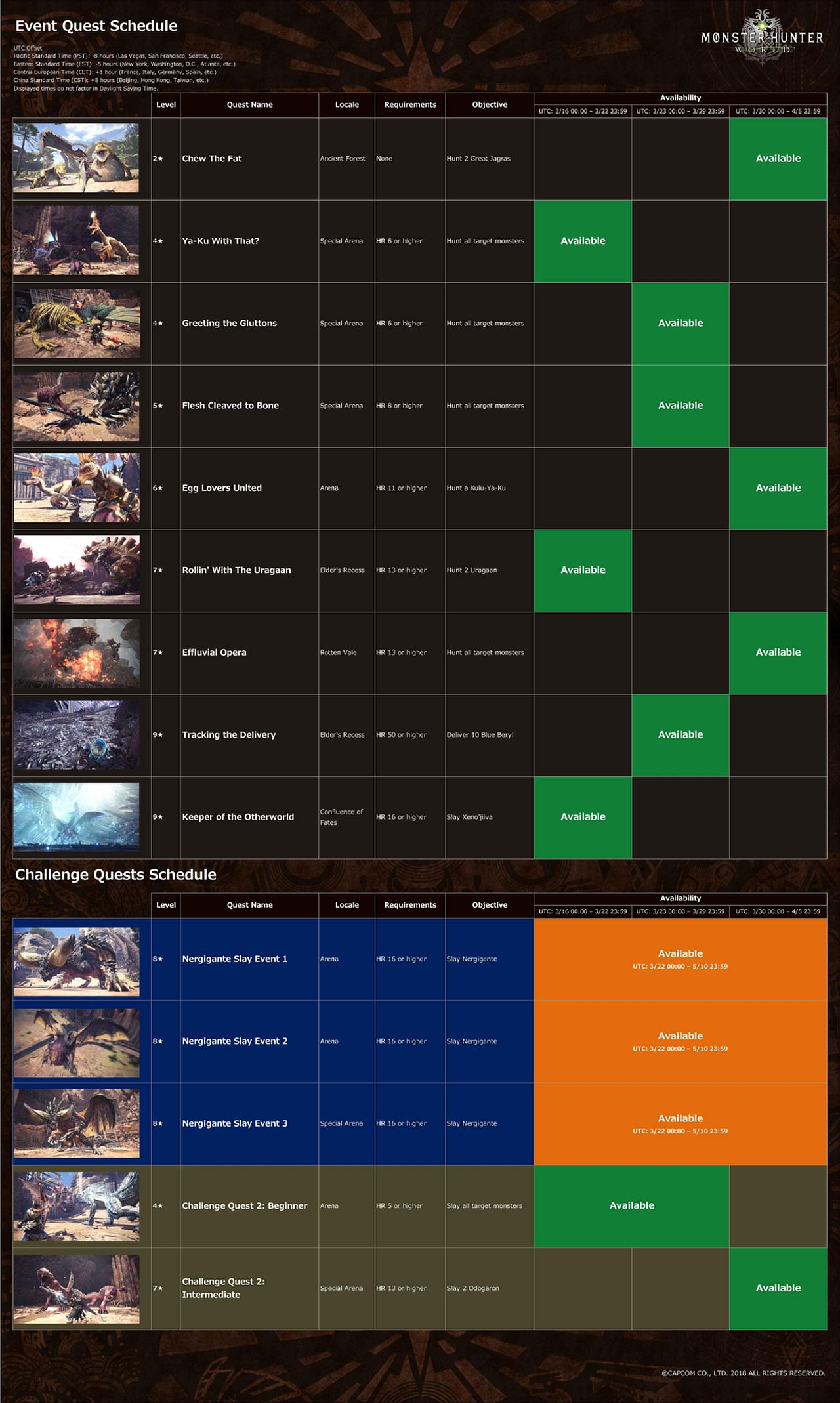