In the middle of all the seemingly endless battle royale titles and co-op looter shooters, there’s a great big real-time strategy hole waiting to be filled. It’s lucky for you, then, that you don’t have long to wait until Iron Harvest releases on PC, PS4 and Xbox One later this year.

While King Art Games has developed several point-and-click adventures and a few turn-based titles, creating a true RTS title was always a goal. Taking the best of the lessons learned over the last few years, the team have worked tirelessly to produce a fully voiced RTS story that has some strong Company of Heroes vibes.

Before you can begin your adventure, you need to decide what faction you’re going to represent in the Great War. You have three choices; Polania, Saxony Empire or Rusviet, all loosely based on Poland, Germany and Russia respectively. Each faction has a playable hero - and unique animal companion - with their stories and roles to play in the war, though their stories will eventually intertwine in the endgame. 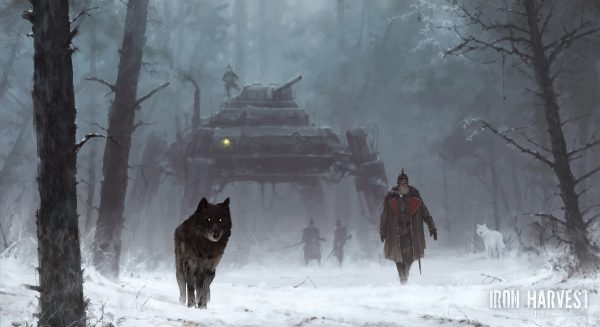 In Iron Harvest, Tesla made a few more technical advances and mechs are very much a thing in this alternative version set in the 1920+ universe created by Jakub Różalski, who also created the art for the board game Scythe. There are different versions of these mechs to build as you progress through the story and multiplayer, each with unique abilities and drawbacks. While there are a few smaller and more nimble mechs to choose from, most are quite large and ambling, though they pack some serious firepower.

For this preview, I played as Anna Kos from the Polania faction. The Rusviets have invaded Polania in the search from some rare technology, namely an electrified mechanical arm wielded by Anna's father, Piotr Kos. Having previously assisted Tesla in a lab, Kos is much sought after and it’s up to Anna to rescue her dad and gather resources for the Polanian Resistance as they struggle to contain the Rusviet threat.

Anna’s animal companion is a friendly bear called Wojtek, who you can summon at any time and will assist you in battle. The Rusviet companion is an equally impressive Siberian Tiger, and the Saxony Empire comes with two wolves, who will also provide you with assistance in battle. 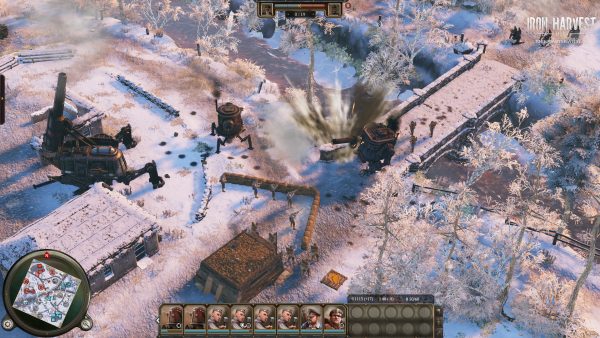 As this is an RTS, there’s a lot of point-and-click action where you need to always be thinking five steps ahead. You can control your main character as well as any squads in your party, and you need to stay on the constant out for resources, enemies and suitable cover. While there’s an adequate warning system for when enemies are nearby, you can get overwhelmed from enemies quite easily if you don’t instruct your party to move to cover or neglect to diversify your squad types.

As you progress through the story, you’ll discover new soldier types and engineers that can make all the difference in a fight. Alongside the usual grenadiers, riflemen and heavy artillery, engineers can construct mines, defences and repair any mechs you find along the way. Eventually, you’ll be able to construct a base for your motley crew and can recruit new soldiers to your cause, as opposed to waiting for a cutscene and hoping a new group will eventually reinforce your efforts. The movement and combat is classic RTS material. It’s intuitive, clean and engaging, and the opening tutorial gears you up for what’s to come well. It’s one thing to fight against and AI, though, and it’s in multiplayer modes that Iron Harvest really shines. 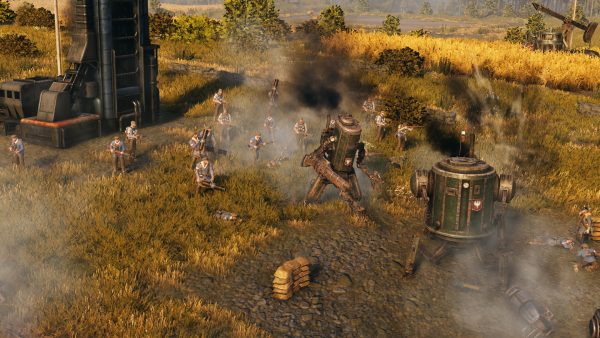 There are a wealth of multiplayer options in Iron Harvest, including co-op, offline versus matches, online matches and skirmishes. At the preview event, we played a four-person victory points capture the flag game as players created a base of operations, attempted to circumvent or destroy enemy resources while trying to capture enemy flags. Some of the mechs you can deploy at the endgame are incredibly powerful and can wipe our your units or precious resources in seconds and it’s a pretty unforgiving experience.

You can also take part in 1v1, 2v2 and 3v3 matches, either with friends or against the AI and compete in various challenges to sharpen your skills. Regular updates, some free DLC and competitive leagues will follow Iron Harvest’s launch in September, though it’s not clear what new additions are coming just yet.

As this was a Kickstarter project, King Art Games has maintained a continuous dialogue with backers and fans through Discord, Reddit and the like. The feedback obtained from backers and players has been instrumental to Iron Harvest’s design, the clever tactics over action combat system and the freedom of playstyle available to create a story to suit you. It really captures the spirit of older RTS games and it'll be interesting to see how whether Iron Harvest's extensive multiplayer will take off and fill that Company of Heroes gap in your life.

Iron Harvest releases on PC, PS4 and Xbox One on September 1, 2020. If you backed the Kickstarter campaign, you'll be able to take part in the Backers Beta later this month. You'll have access to the first five Polanian campaigns, alongside a few new skirmish and multiplayer maps.