Is that a Halo in your pocket or are you just pleased to see me? Stace Harman takes a first look at Halo: Spartan Assault as the series makes a long overdue return to PC. Sort of.

To promote Halo: Spartan Assault and further bulk-out its fiction, 343 has teamed-up with Dark Horse comics to produce a three-part tie-in story called Halo: Initiation, which offers more insight into the Human-Covenant wars.

There’s no Master Chief, instead players have the choice of either Commander Sarah Palmer or Spartan Davis and the option to customise their appearance and loadouts before each mission.

Halo: Spartan Assault launches in July, worldwide pricing is yet to be announced but it will retail for $6.99 in the US.

If you’re still reading then please set aside your cynicism for the next five minutes so that we can explore just what all of that means.

I’ll start with an admission, Halo: Spartan Assault is not what I expected to see when I accepted Microsoft’s invitation to experience its new, “non-console” Halo project.

I was thinking it would be something along the lines of the recently confirmed Halo: Bootcamp or, at a push, a PC-collection of its notably absent Halo releases from the past six years.

Instead, Halo: Spartan Assault is an arcade-style, top-down shooter for Windows 8 whose fictional purpose as a battle-simulator program aboard the UNSC Infinity addresses the question that’s on nobody’s lips: what do Spartans do for fun?

The answer will soon be apparent as the game is on its way to Windows 8 as early as July.

As a Windows 8 exclusive (did I mention that yet?), Halo: Spartan Assault will be available for all devices that run Microsoft’s latest operating system and while that certainly includes laptops and desktop PCs, the design ethos has been focused primarily on mobile devices such as tablets and smartphones.

“We wanted to create a mobile Halo experience that you can take with you wherever you go but we wanted to make the right mobile experience, we didn’t want to just make a port of the console game,” explains Dan Ayoub, executive producer of publishing at 343 Industries.

“Halo has always defined the platform that it’s on, it’s always been the crown jewel of Xbox and Microsoft and we wanted to do the same thing here, we wanted players and other people in the industry to look at this and say ‘wow, how are they making the game look and sound this good.’”

At this point, disgruntled PC Halo fans may be asking not how 343 and co-developer Vanguard Games are doing it, but why. With only two of seven previous Halo titles released on PC, why is the series returning to the platform with an off-shoot of the main franchise?

The answer lies in that desire to create a mobile Halo experience, the host operating system’s mobile-friendly architecture and the simple notion that Halo: Spartan Assault looks to be aimed more directly at those searching for a quality mobile arcade-shooter than it is at series aficionados.

That said, franchise fans will appreciate the wider Halo fiction that underpins Spartan Assault. Set between the events of Halo 3 and Halo 4, Spartan Assault tells the story of Sarah Palmer and the events that led her from a UNSC Shock Trooper to become the Spartan commanding officer aboard the Infinity warship.

The game exists inside the Halo universe as a battle simulator that the UNSC uses to both educate and entertain its current crop of Spartan hotshots on their days off. The simulator serves to highlight important conflicts in the UNSC’s history, in this case the battle of Dreatheus 5 that took place in 2552 when a splinter sect of the Covenant ignored a ceasefire and attacked a UNSC installation.

This fiction provides a jumping-off point for Halo: Spartan Assault’s 25 levels, which each last between 5 and 10 minutes and include shooting aliens, planting bombs, commandeering vehicles, defending bases and the odd escort mission.

Ayoub estimates that playing through all of the levels will take around 2.5 hours and so the focus is really on replay value, which is added via mission-specific challenges, such as killing 20 grunts with a plasma pistol or destroying two shield turrets with a grenade. There are also varied weekly challenges and global leaderboards to keep you interested.

Meanwhile, Halo 4 players will be able to earn XP, achievements and medals while stat-tracking will be incorporated via Halo Waypoint and multi-platform play will allow progress to be tracked across all of your Windows 8 devices. 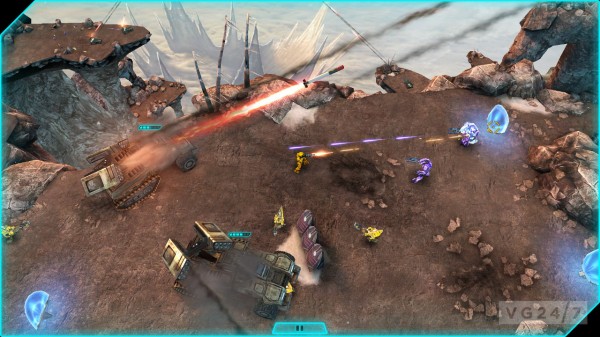 Of course, control schemes across those devices will vary. Halo: Spartan Assault will support keyboard and mouse on launch for laptop and desktop platforms, while Xbox controller support will be added a few weeks later. However, it’s the touch controls of tablets and mobiles that are intended as the primary input for Halo: Spartan Assault.

To this end, 343 and Vanguard have found an effective solution to the problem of “gliding”, where your thumbs gradually move up toward the top of the screen of a tablet device due to the lack of purchase on the smooth surface.

Here, movement is handled by the left thumb while shooting is assigned to the right and, without finicky on-screen thumbsticks, these controls will work no matter where your thumbs move to on the screen. At any point you can lift your thumbs away from the screen and plant them back down in either corner in order to reset their position.

Other controls involve double-tapping for melee and visible on-screen buttons for grenades, picking up items, swapping weapons and activating Spartan abilities. Vehicles utilise the same control set-up as when on foot with the exception of double-tapping being the trigger to fire heavy weaponry such as cannons. 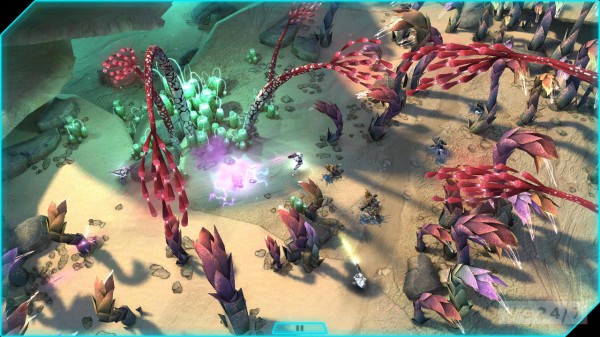 The economic environment is still being finalised, but Ayoub explains that there will be two different currency types: one you earn and one you buy. Weapons, temporary boosts and customisation items can be purchased via microtransactions or earned in-game, though there is currently no word on whether certain goodies will only be obtainable by via one currency or the other.

From a brief hands-on with a handful of levels on a Windows 8 tablet, Halo: Spartan Assault looks to provide a series of fun, bite-sized levels with solid controls, high-quality visuals, recognisable weapons and Covenant species, familiar sound effects and ample replay opportunities.

What Halo: Spartan Assault does not provide is an answer to PC players’ ongoing calls that they be permitted to conclude the original Halo trilogy; nor does it offer them the chance to experience 343 Industries’ own Halo 4.

Instead, Halo: Spartan Assault is a Windows-8-exclusive, single-player twin-stick shooter. It features touch-optimised controls and will provide a mobile Halo experience that’s supported by optional micro-transactions. So, does your cynicism tell you that’s all you need to know or is your curiosity urging you to give it a try?