I’m wandering through an abandoned hotel in the quarantine zone of City-17, carefully opening doors with my actual hands and using my real-life head and eyes to peek into the dark. Organic growths throb from the walls, and disgusting pustules swell and spurt open as I pass. The scene fills my entire vision. I can hear headcrabs scuttling in the vents above, and occasionally there’s a low moan from a zombified resident who’s being puppeteered by one of these space chicken gits. I might be standing still in real life, but my brain is utterly convinced by the illusion that I’m here; among the Soviet modernist buildings, the sirens, the radio chatter of City-17. It’s a dream - or perhaps a nightmare - come true.

In the real world, the birds are singing but there’s no noise from my neighbours. They’re all locked away and the world is still. My mind is anything but. I’ve barely slept. My children are downstairs playing like nothing is different. But I know, deep down, everything has changed. My brain refuses to shut off. Even writing this is an effort. Nothing exists now but looming dread and anxiety, a fear of the future following a global pandemic and what changes it might bring. Some of those worries temporarily fade when I pull the Valve Index over my eyes and strap the controllers to my hands, stepping into the terrifying world of Half-Life: Alyx.

Alyx has been the last week of my life, switching between this virtual reality world and the horror of our actual existence. In a week where we’ve had all the time to do what we want, it’s been hard to do anything but think. Alyx is the only thing that has grabbed my attention away, like an alien barnacle waiting high above with a hungry mouth and a sticky tongue. 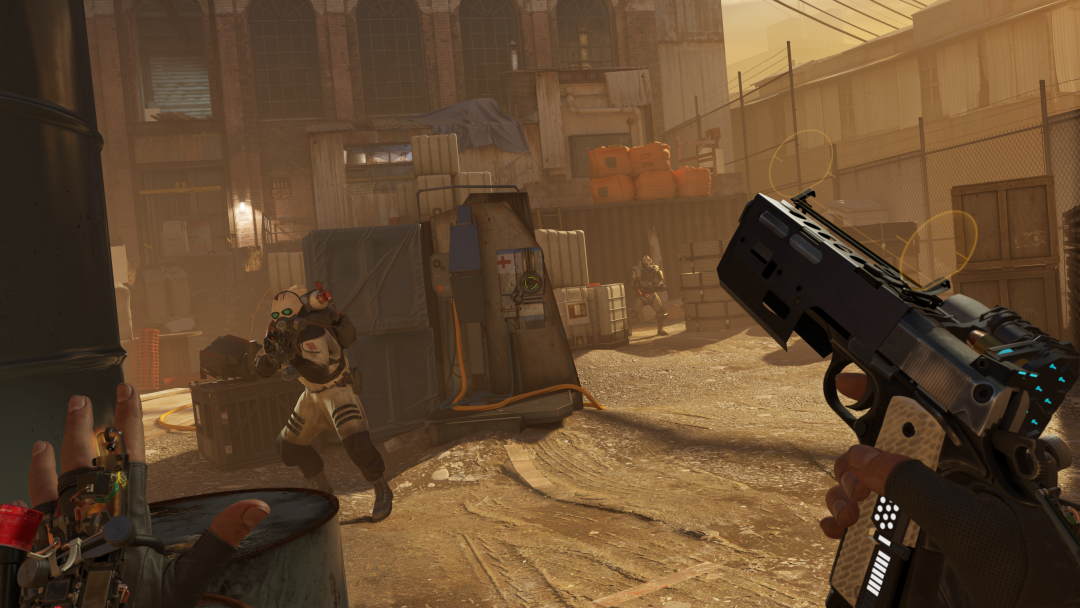 A prequel to Half-Life 2, we play as Alyx Vance, a fighter in a resistance army looking to eradicate the alien combine from Earth. This race of Nazi-esque extraterrestrials conquered the world in seven hours, and Alyx has known nothing but their rule. Her young brain was forced to adapt to this new world, but she still wants to fight for a better future. She believes there is hope ahead, that the future is open to positive change. Just like our real world, which right now needs progressive values to protect our most vulnerable, the future of Earth could be a united one. It’s a driving force we can all empathise with.

It’s no surprise that Alyx is much more of a fleshed out character than Gordon Freeman, the mute protagonist of the previous games. Hell, Alyx was more fleshed out in Half-Life 2 and that was supposed to be Gordon’s game. She quips and comments on the things you do, and she has banter with Russel, your handler and the creator of the ‘Russel’ gloves you use to manipulate items from a distance, flipping them through the air towards you with a flick of the wrist. In one bit of memorable back and forth, Russel explains the concept of a club sandwich to Alyx, and you can immediately see how the developers at Campo Santo were put to work when they joined Valve. The interplay between characters is human and natural, reminiscent of how Firewatch made its radio-based conversations so convincing.

“Convincing” seems to be the key word. From the moment you boot Alyx up, you are fully spirited away. You start the game looking out over City-17, watching huge striders climb across rooftops with their spindly, organic legs. There’s a radio nearby that you can poke at and prod, manipulating the antenna and changing the frequency. There’s a felt pen that you can pick up and scrawl anything you want on the window nearby. There’s a globe to spin, a pet creature to feed, and a camera to move around and look through the viewfinder. Almost everything in this world can be picked up, moved, thrown, or manipulated in some way. But it’s not just the granular details that impress, it’s the awe-inspiring scale - those striders, the huge electrical lines dangling overhead, and the strange structure hanging in the skies above: your main objective, some kind of combine weapon that you need to reach and conquer and turn on its masters. 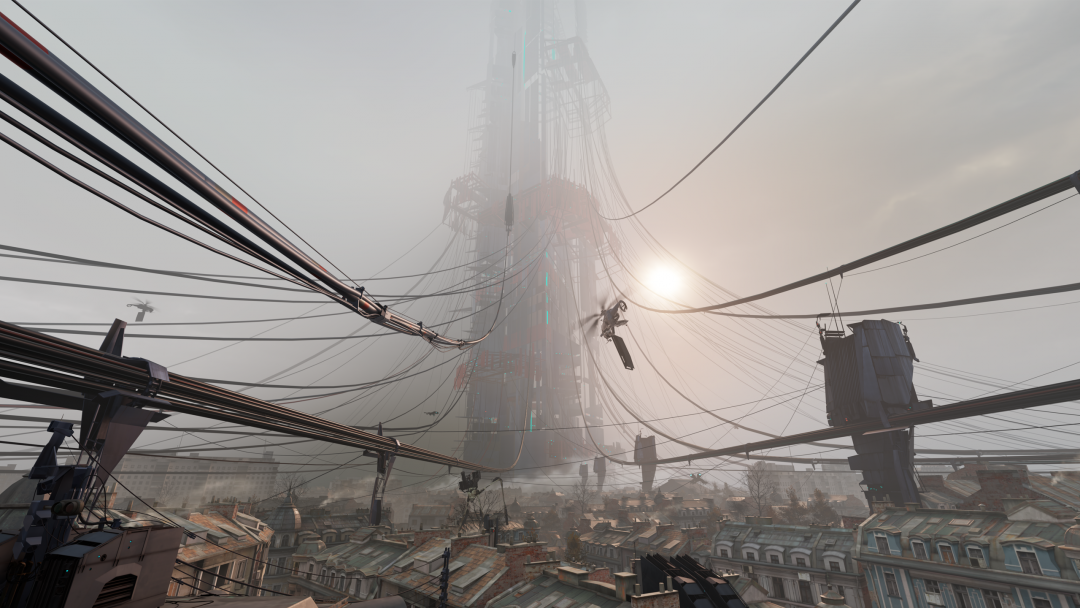 One of the reasons Half-Life 2 is so fondly remembered is because of how it staggered its campaign with combat, exploration, puzzle solving, and set-pieces. You always felt like you were doing something new or seeing something unexpected. It’s the same across Alyx’s 15 hours, minus any vehicle sections. In their place is more Ravenholm, Half-Life 2’s scariest section - an abandoned town that’s been overrun by headcrab zombies. It’s grim and oppressive, and so is Alyx, which is closer to a horror game than anything else. It’s interspersed with moments of levity and has the signature Valve wit - and there’s plenty of brightly lit firefights that take place in the streets, using clapped out cars for cover - but Alyx isn’t afraid of taking you into the dark and screaming in your ears either.

Early on, you have to trek through an abandoned metro station that’s full of zombies. You walk through train carriages filled with corpses. You rifle through their pockets and peer out onto the platforms where zombies shuffle around, looking for something to kill. At one point, I was peering through a window watching a zombie move and it suddenly changed direction and dived through the window towards me, smashing through the glass and clawing at my face. This would have been bad enough in an ordinary first-person shooter, but it’s transformative in VR, seeing those blood-caked hands clawing at your eyes.

Later, there’s a section where you’re being pursued through a vodka distillery by an entity nicknamed ‘Jeff’. Jeff is blind and aggressive, and your bullets are ineffective. You have to throw bottles of vodka to distract him, using the environment to your advantage. Organic growths spit out spores that make you cough when inhaled, so you have to cover your mouth as you pass, or cover your mouth to muffle your coughs if you accidentally breathe any in. This hour of the game is one of the most intense, exciting things I can remember experiencing in our medium. 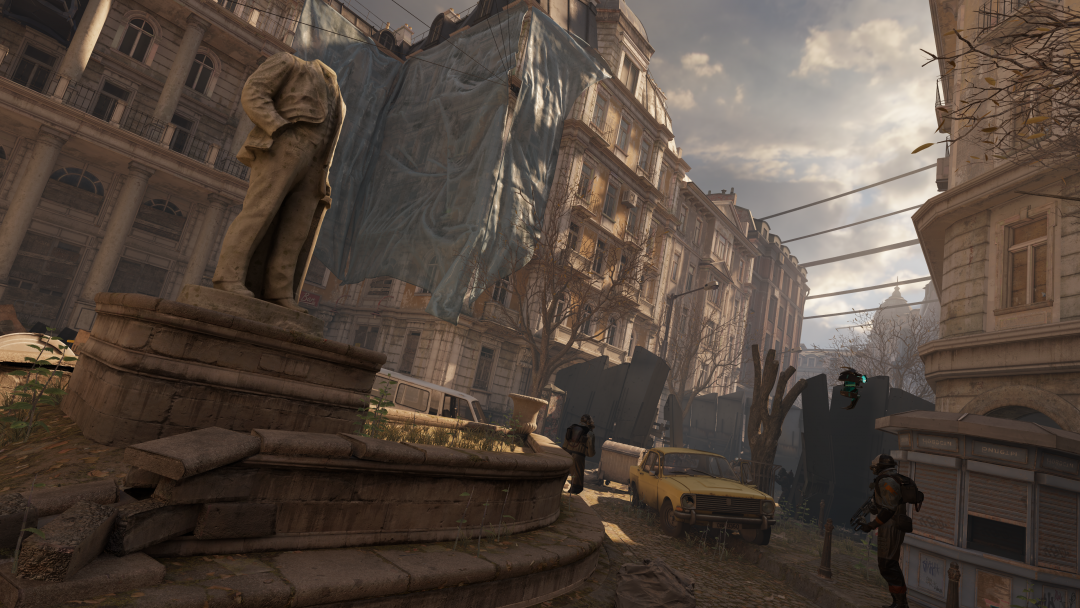 It’s no less thrilling when Alyx switches gear, either. All your weapon reloads are performed manually and they’re different for each of the three main guns. For the pistol, you press a button on the side to drop the magazine, pull a new mag from over your shoulder and slap it in. Then you need to pull the slider back to chamber a round. At first, you do these three steps one at a time, but eventually it all becomes one smooth motion. The shotgun is mostly similar, but you put the shells into the tube itself so the button makes the shotgun fold apart. You flick your wrist to snap it back together again. Your reload skills aren’t truly tested until you’re reloading under pressure - either an advancing zombie or a hail of combine fire - and you inevitably fumble and drop your magazine onto the floor.

I mentioned it before, but those Russel gloves allow you to pull items to you from a distance. That means you can flick ammo pouches from a dead enemy’s pocket straight into your hands, or pull incoming grenades out of the air, allowing you to toss them straight back. Fights with the combine are frantic and you need full situational awareness. The physicality of the world adds so much. You might look batty, but there’s something thrilling about crouching down in real life so you’re protected from fire by a virtual car. Or grabbing a car door’s handle and pulling it open like a makeshift shield as bullets whizz through the air, ping off the metal, and smash through the window. You don’t even need much room to enjoy it either - so long as you can stand and crouch in place, it all works wonderfully.

In one fight, I’m crouched beside a car and a combine soldier tries to flank me. I switch to my shotgun and unload two shells into his face, sending him flipping backwards. There’s a grenade hanging from his belt and I could use it to take out the two combine who have me pinned down. I use the Russel gloves to flick it towards me and an enemy bullet strikes it in the air, detonating it meters away from my face and forcing me to rethink. There’s an element of randomness to Alyx that could only exist in VR. 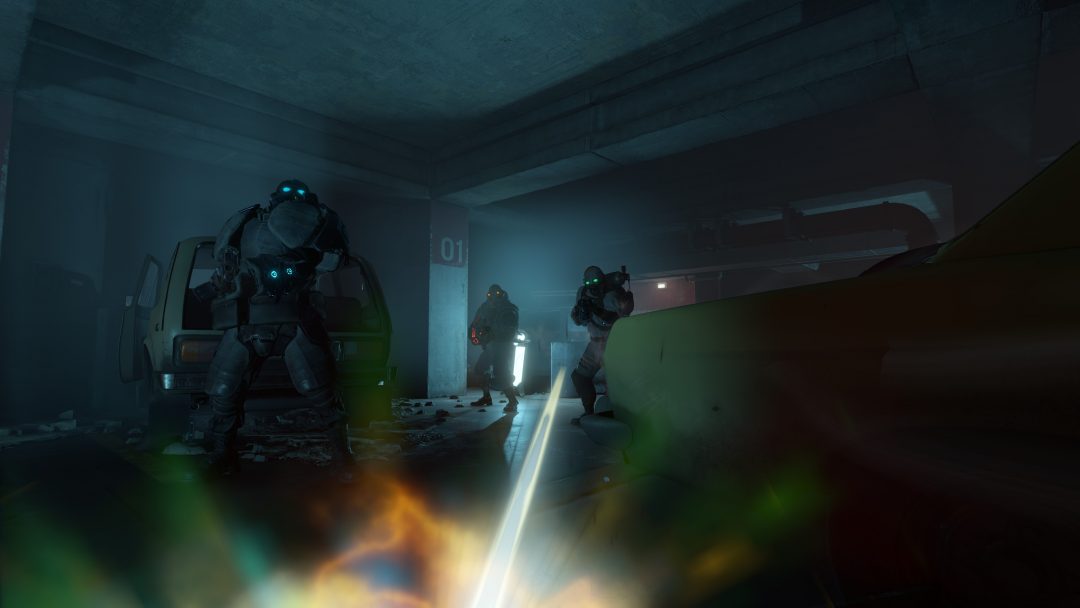 You’d be forgiven for thinking Half-Life: Alyx isn’t a proper Half-Life game. This is a prequel for one thing, exclusive to VR - surely its place in the story and its limited audience mean this is something you can skip over. It is not. Alyx isn’t only an essential experience, it’s a key piece of the Half-Life story. If you can’t play it, you should at the very least watch the excellent ending on YouTube so you’re ready for the inevitable Half-Life 3.

When Half-Life 2 released, it revolutionised the first-person shooter. It set a benchmark for shooters that followed, just as the opening train journey in the first Half-Life led to dozens of games aping that slow-burn introduction. One of the reasons Valve never counted to three and gave us a proper sequel is the expectation that comes with it. The series’ core ideas have been refined and polished, and believable physics are no longer such a novelty in video games. Where is left for Half-Life to innovate? It turns out Valve just needed new tech. It just needed VR. And it’s what I needed, too.

We’re in an unprecedented moment in time and we’re all scared, we all have our worries - whether it’s about family members, yourself, or losing your job. In these crazy times it’s so hard to focus on anything, but a VR set and Alyx is like your own personal headcrab, blocking out the senses and letting you puppeteer someone through a series of events where you’re the sole agent of change. Where you don’t feel powerless. Alyx’s main fault is its hardware barrier - I wish more people could afford to experience it. The last thing we need is more people locked off from each other. My neighbours might be quiet, but if we all open our windows at the same time, we’ll hear the same birds singing their song.