Grand Theft Auto Online is online now, and VG247's Dave Cook has been playing it for a few hours. Does it make good on its ambitious goals, or is there still room for improvement? Find out here.

I logged in to GTA Online yesterday to try it out and like many of you out there, I encountered a wide range of technical issues. This is in no way a complaint because look, Rockstar North is playing an ambitious hand with this service. It's a complex beast that needs time to stabilise.

Without seeing the stats I can already tell that the game's servers were being flogged mercilessly by the flood of gamers scrambling to get online. Log-ins were temperamental, jobs failed to get started and some missions are simply broken. I tried to play the 'Roadgame' key mission about ten times for it to fail as soon as the match began.

There's the classic argument that goes something like, 'Oh but Rockstar must surely have known the service was going to be busy. Why didn't they better prepare?' Well yeah, that's a point, but we don't really know what the issue is, and the company even said that the launch would likely run into issues. If you do manage to get online you'll start to see just how ambitious the service really is, and perhaps even appreciate why it's not all quite there yet.

After the initial tutorial is through, you really are handed the keys to the city. You can free roam around Los Santos in search of other players to work with or kill, accept jobs to earn money and start to build your online empire one dollar at a time. I said in this blog that GTA games have always intimidated me. While I didn't find that with GTA 5, I am finding it already in GTA Online. It's vast. So very vast.

You can walk into marked stores and hold them up, sell cars to Mod-Shops, kill other players and nick their money, take part in team deathmatches, vehicle deathmatches, car races, bike races, water races, parachute jumps and much more already. it takes a while to learn the menus and options open to you when it comes to setting up sessions, join other game instances, invite your pals and get the ball rolling, but once you do, there's a danger you might get yourself sucked into GTA Online's black hole and never emerge again.

One thing I like is the ability to buy-in to Passive Mode, which means you can't be killed or have your car stolen. It's the safest way to free roam at your own pace and get a handle on what's going on around town. But once you deactivate it, all bets are off. I parked my car in an alley and went for an actual piss and a coffee, only to return to see some dude shotgunning my face into paté. Cheers, whoever you were. 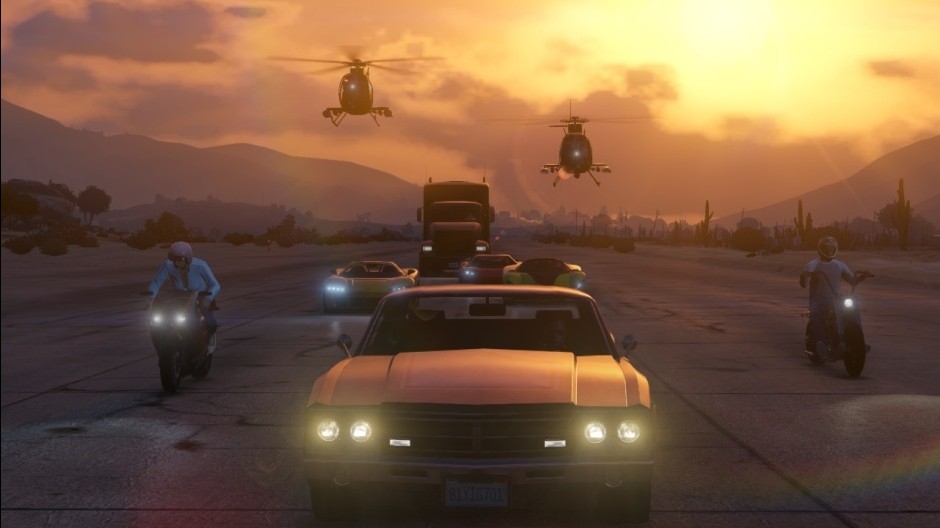 I was worried that people would be able to kill me and steal my favourite car, but this is where the game gets clever. You can visit a garage and have a tracker installed in your ride, which highlights it on the map all the time, should you become separated. There's even an option to insure it. If it gets totalled, you can then call up the company to have it replaced. This doesn't work if it gets confiscated by the cops after a bust though. You have to break into the nearest impound and steal it back before it gets cubed.

On the map you'll see a mess of blue icons, each representing a 'Job' type. You can travel over to them or quick-join via the menu to start the session. For example, I entered a team deathmatch around the Los Santos country club. It was a big map that saw four teams shooting the crap out of each other by tennis courts and opulent club houses. The shooting feels just like it does in the campaign, but as host you can turn match-making on and off, and other variables to tailor the session.

PvP maps are dotted with guns and body armour to give either team an edge, but you do have to enter each fight with your own guns bought in free roam. Fights that aren't match-made can potentially see tougher players with better weapons whaling on newcomers with starter guns, but I haven't played long enough to see if this is a issue. I was being one-shotted from miles away in one game, but they could just be a great shot. Again, it's too early.

I dabbled in a few races too, and there's mass griefing potential there. One dirt bike sprint saw a bunch of dicks crashing into everyone going nto the first turn, knocking some of us off a ledge and unable to hit the first checkpoint gate. You can hold Y/Triangle to respawn ahead of the last gate you missed, but by that point there was no point in carrying on. We had lost before the race it had really begun. That sort of scenario really grinds my gears, but I'm not sure anything can be done about it really.

These things still didn't water down the fun I had when things went right. Deathmatch is a riot, the races can be fun when it's not a destruction derby and I'm really intrigued to see where it all expands from here. My highlight was a horde-style stand-off in a dilapidated plane hanger, as waves of screaming hicks bore down on us. I was just playing with three total strangers but we worked together well and got really far. I could have played that one mission for ages.

While Job creation isn't fully there yet - aside from quick races - I can't buy a house or garage yet as that broken Roadgame mission is blocking my progress, but I really am fascinated to see how GTA Online evolves. There's real scope to keep this thing going for months if not years, but only if the broken elements are fixed and remain stable soon.

I'll write more in a week or two once everything's calmed down a bit. To make a judgement call now would be unfair.

Disclosure: To assist in writing piece, Rockstar sent Dave a copy of GTA 5 on Xbox 360.