Ghost Recon Breakpoint is a game about rogue US military who have turned on their own people and will kill anyone who gets in their way.

Ubisoft insists this game about fighting domestic terrorists isn't political. Breakpoint is just another Ubisoft war game where the focus is on players being able to tuck their socks into their boots.

So here's an interview with Ghost Recon Breakpoint developers Sebastien Le Prestre (associate lead development tester) and Laura Cordrey (community developer) in which they deny the game has any RPG-lite mechanics, refuse to acknowledge any survival game influence, can't say if weather has any affect on gameplay, and admit that the story hasn't got anything to say about anything. 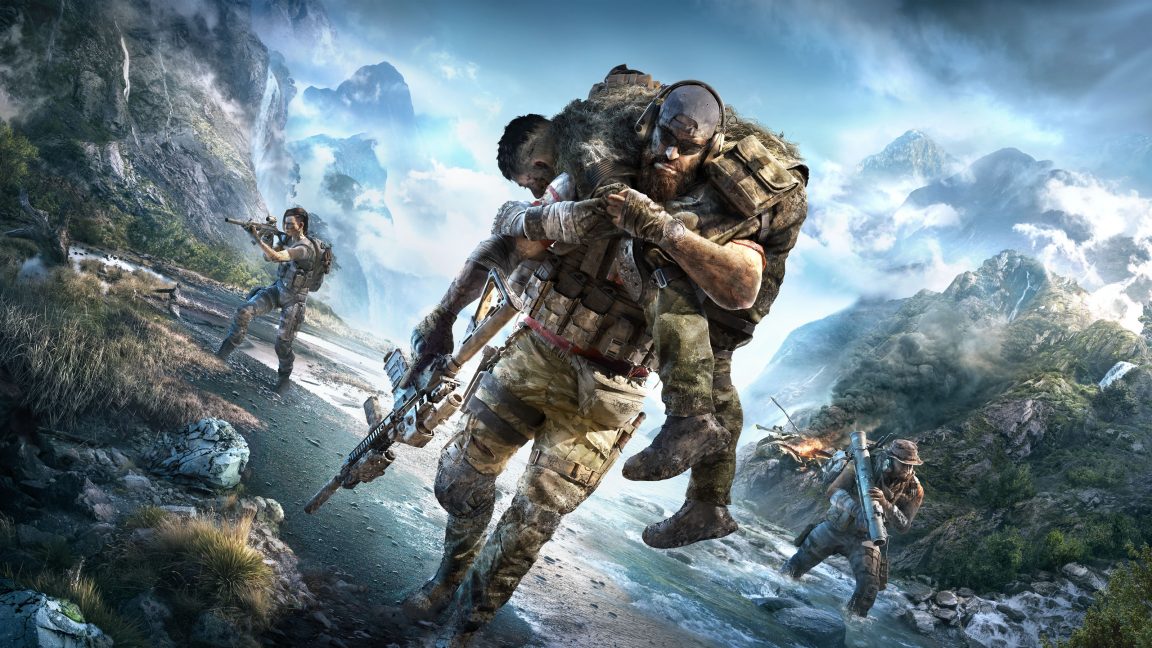 VG247: I know you touched on this in the presentation, but just to be absolutely clear... how do you view this? Do you view this as a full sequel, a replacement to Wildlands, or do you view it as something that'll coexist alongside it?

Sebastien Le Prestre: Breakpoint is a full, new game. It's completely separate from Wildlands other than the lore and the, y'know, the mystique of the Ghosts. It's a full new standalone game. We don't consider it an expansion of Wildlands or any of that stuff. It's all-new.

VG247: So does that mean you consider yourselves pretty much done on Wildlands service updates now, or will they run hand-in-hand for a while?

Laura Cordrey: There's a few more surprises to come for Wildlands, too. But of course our team is really focused on and invested in Breakpoint. Also, if you've not played Operation Oracle, the Wildlands DLC, it's a lot of fun and there's some nice links to Breakpoint in there.

VG247: In that first mission we see, the rain is really coming down hard. You talked a bit about the environment being a big part of the game... so is weather going to be a significant part of that as well?

Sebastien Le Prestre: That's a good question, but we can't talk about the weather and how it will effect the player at this point. What we can talk about is how the environment itself will. So, as you noticed, when you're going down slopes if you don't control your speed you're going to slide, you're going to lose control. You've got all the survival mechanics with the bivouacs and that - being able to carry your buddies... You're going to feel the environment in yourself, really. When it comes to weather, we'll give more details at a later date.

VG247: I think this might fall into the same not-talking-yet category, but I'm really curious about the bivouac camp feature. What sort of form does that take? Obviously it clearly has an impact on healing, but are there other benefits?

Sebastien Le Prestre: There are, absolutely. I can tell you because we've shown a bit of this... as you saw, as you picked up on, you can heal your ghost from serious injuries there. As we mentioned in the video, you can also switch classes at will there.

What we didn't really touch on in the presentation is that you'll also be able to craft in there using the resources that you find all over the world, really cool stuff like that. Also, much requested by the community is that when you leave the bivouac you'll now be able to choose the time of your choosing to emerge. So if you want to come out at night for stealth missions and such, you'll be able to do that now.

So it's a bunch of different features. We even have the possibility of gaining different buffs. So if for example you want extra accuracy, there'll be things you'll be able to do there to give yourself maybe fifteen or twenty percent extra accuracy for gameplay. So again, you can build the bivouac and then really prepare for a mission, think about your weapons, which items to craft and bring, which class to be... we're thrilled about the bivouac, there's tons of things to say about it. It's a big, major feature for us.

VG247: How much debate was there about that internally? I mean, when you're starting to have things like stat buffs, this little creeping of RPG mechanics... but then you want to preserve the simulation side. What was that like internally?

Laura Cordrey: I think that the bivouac really gives that kind of authentic military experience. You can obviously use it solo and in co-op. We wanted to give players a place to rest, heal and strategise. A place to plan for that next mission. That was the objective of any feature.

Sebastien Le Prestre: For Breakpoint, we don't use the term RPG. We have more of a fleshed out progression system. We said you'd be able to share your progression between PVP and PVE at all times, things that you unlock in one you unlock in the other. So it's more of a progression as a version of your player and not so much an RPG. We're still remaining Ghost Recon at our core. That hasn't changed. We're still a military shooter with co-op, and it's based on everything our fans know and love.

VG247: Well, it's that thing now, right - everything has bits of an RPG. The lines are so blurred...

Sebastien Le Prestre: Yeah, exactly. That's what we prefer to express as.

VG247: Do you feel like you've found a good balance between making sure that people who want to only play solo can get what they want while having all the multiplayer features you want for others?

Laura Cordrey: We obviously want to make sure that however you want to play, this game is accessible for you. In Wildlands we released the option to be able to turn off AI teammates for instance, and that was really well received. So that's what we're really excited about - being able to offer both experiences to players in this game. If you want to be the lone wolf, you can be. If you want to get in a squad, you can be.

Sebastien Le Prestre: Like Laura's saying - even though you can now solo, you can also still do anything that you could do before with your buddies. Like a sync shot - you usually do that with your buddies, but now we have a drone that you can command to do those with. Why we want to have solo in there so much, also, is because it fits our narrative perfectly. You're behind enemy lines, you've been shot down. But again, it doesn't change your experience. In terms of balancing, we can't give too many details about how we're balancing everything, but that's a core of our development right now, so rest assured the experience is the same.

You should be able to do anything you need to do to progress. However there are some things, like raids, that will require and cater to groups.

Laura Cordrey: The real idea is you going from being the hunter to the hunted, that you're lost behind enemy lines. All the decisions we made were designed to fully immerse our players into that experience. It's very much the Ghost Recon fantasy, but twisted to match this new storyline.

Sebastien Le Prestre: We take our inspiration from the Tom Clancy lore. He wrote so many things that we're able to easily pull from that. 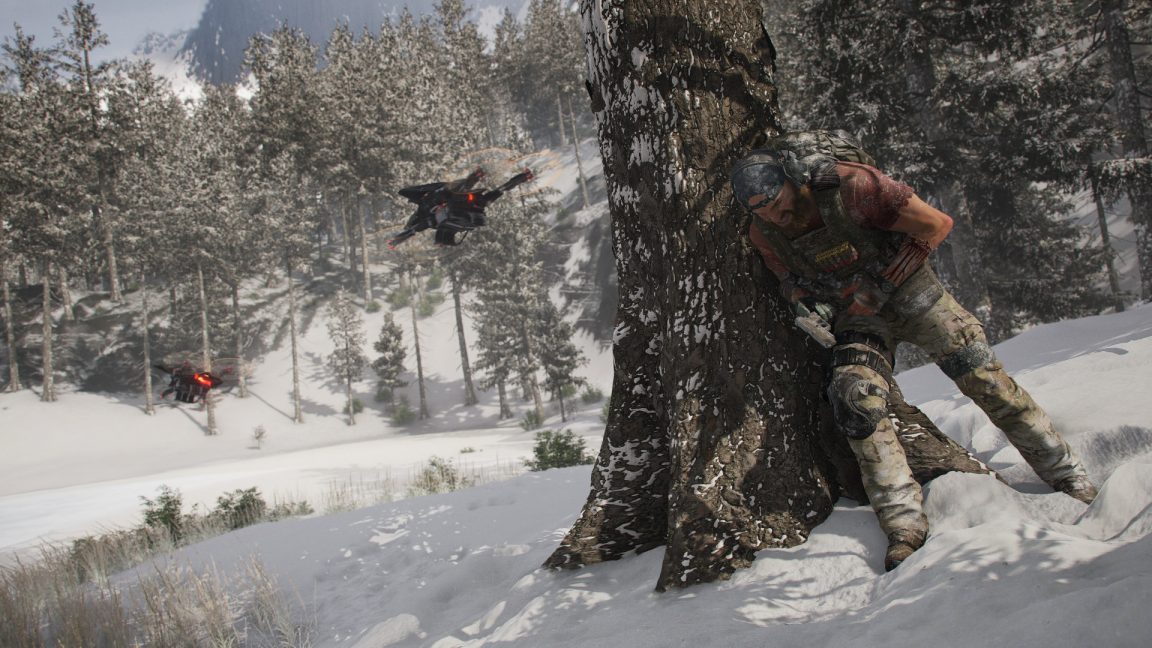 VG247: But do you ever run up against that? Do you ever find - and I realise this kind of thing is difficult to talk about - but is there ever an idea bubbling away and then you realise perhaps it doesn't fit to Tom Clancy and what he wrote?

Sebastien Le Prestre: Well, that's a good comment. Tom Clancy's universe is always a work of fiction, even if it is grounded in current events and things like that. We try to find inspiration from the world around us, but we... we're building a game. We're not trying to make a statement. We're not going to lie, we're really going for the thing that we think will be most interesting for the player in terms of fun and gameplay mechanics, plus immersion in the storyline. From there we're not trying to direct or get inspiration from something else direct - it's all about the experience.

VG247: Sorry to harp on this, but following on from what you said there... what's it like to walk that tightrope? The work of Clancy is inherently political and absolutely makes statements. But then you want to make a game around it that's fun and don't want to...

Sebastien Le Prestre: It's fiction. It's all a work fiction. We're going for ultimate realism, but beyond that there's no message that we're trying to send to people here. We just want people to have fun, to have an enjoyable experience. We're not really 'walking a tightrope' in that sense. This universe is so rich and gives us so many gameplay opportunities that there's plenty of inspiration for us there.