There’s an animation I’m particularly fond of - the one that plays when I order Augustus Cole to charge an enemy with his bayonet. All 230 lbs of the Cole Train tips forward, Thrashball pads glinting in the sun, as he barrels blade-down across the battlefield. The yell that emerges from his throat isn’t so much a battlecry as the sound of a man slipping out of control. His feet fall close together, as if buckling beneath the burden of his retro lancer. Yet he reaches his target, and its hide presents no resistance at all - the Locust lifted bodily from the ground and into the air on the end of his spear.

That’s the very best of Gears Tactics, when despite the necessary rules and stricture of turn-based strategy, the action feels just as chaotic and unpredictable as any trophy match Cole played in his sporting days.

But the Thrashball star is also emblematic of what Gears Tactics is missing: a voice of its own. While an enormous presence on the field, a figure of infectious confidence, Cole is completely mute in cutscenes. Since he only joins your squad as a pre-order bonus, Gears’ biggest personality is completely peripheral to the campaign. He’s an effective totem for a game that doesn’t really have any ambition beyond fan service, even as it successfully transposes Gears to a new perspective.

It’s not a huge mental leap to imagine Gears of War as XCOM. Both games revolutionised their respective genres by making cover explicit, and so it feels perfectly natural to send your COG soldiers bouncing from low wall to van door, searching for the spot that will keep them protected and grant them a view over your enemies. The fundamentals of Gears Tactics will be familiar to anybody who’s dabbled in Firaxis’ reboots, or the many other skirmish strategy games they’ve inspired.

Even the plot invites comparison. Developers Splash Damage and The Coalition have chosen to set their adaptation right at the genesis of Gears’ sorry world, opening with the scorched earth bombardment that reduced Sera to rubble and failed to stop the Locust. As a consequence, Gears Tactics concerns a ragtag military fighting a last-ditch battle against a threat it’s still working to understand, ordered around by a shadowy official behind a screen. Like XCOM. 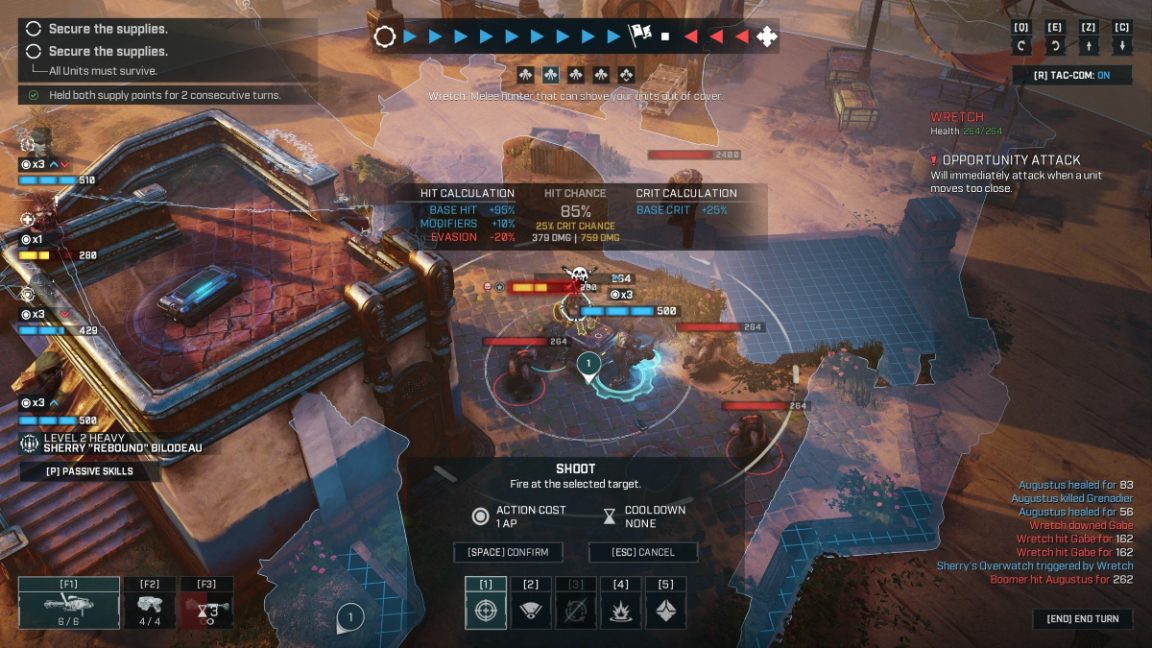 Yet the distinct character of Gears comes through in every frame. Your squaddies don’t just move into cover; they slam into it with a percussive thud. And once the Locust close in on your carefully chosen cover, you’ll find that the serrated underside of your rifle isn’t just for show. Both of the heroes at the centre of your squad, Sergeant Diaz and Private Redburn, thrive in melee range. Rather than rolling over and dying after taking critical damage, many enemies fall to their knees and bow their heads, practically begging for graphic execution. And as it happens, your soldiers are happy to oblige. This is a meaty game about chunky men who reduce their foes to meaty chunks.

The environments you fight in during the first act, too, are deeply reminiscent of those that made the original Gears trilogy the most famous brown games in the world. They’re quasi-European cityscapes, made up of infinite plazas and public fountains - which, in fairness, isn’t exactly a misrepresentation of many European capitals. There’s a thrill to watching e-holes burst open from a new point-of-view, and the novelty of seeing these familiar sights repurposed will carry most Gears fans happily through the first few hours. 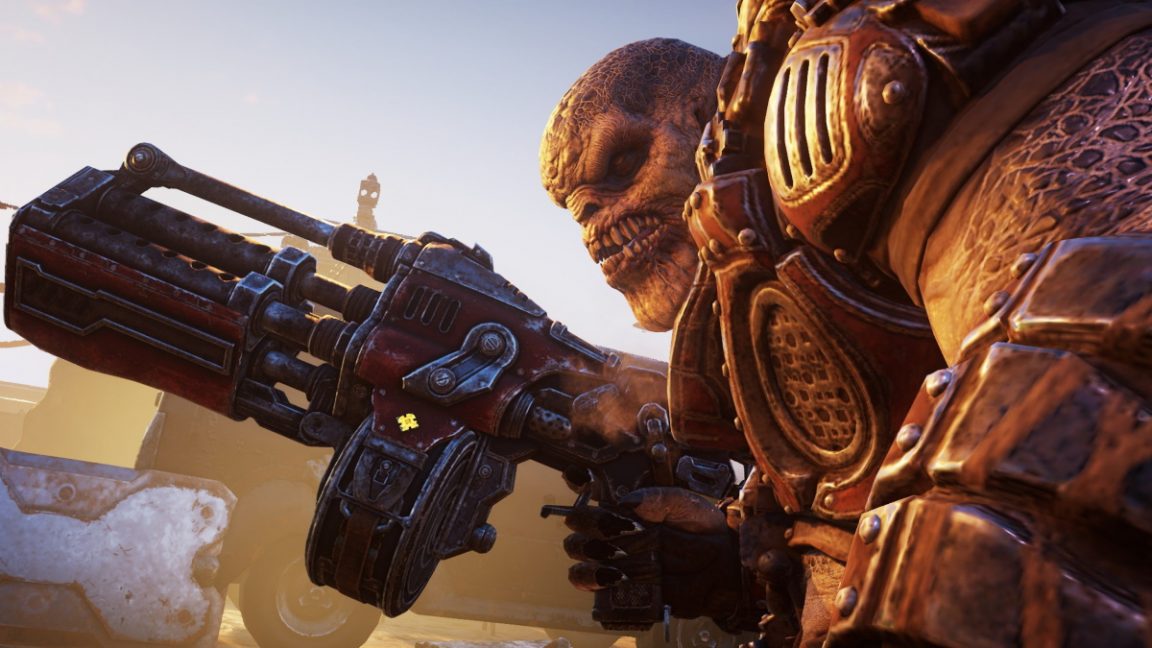 Thankfully, though, the action does eventually move on to more colourful climes. The second act introduces a Mediterranean haze and bronzed architecture that recalls Dubrovnik, giving the impression that you’re shooting up King’s Landing. And just as I’d disapprovingly tapped the words ‘no verticality’ into my notepad app, ladders and staircases started appearing in the maps, bringing welcome sniper positions and chokepoints in which to plant grenades. But these changes come slow: Gears Tactics has a habit of eking out its ideas over multiple levels, staggering the deployment of new scenarios and enemy types to justify its lengthy campaign.

The plot certainly doesn’t contribute any momentum. Gears 5 won accolades for its mastery over the quiet moments, rather than just the loud ones, but it’s best not to overstate the series’ newfound subtlety. Gears Tactics’ storytelling is as broad as the shoulders on its heroes, and finds the series apeing Private Ryan once more. If your idea of a ripping yarn involves a) doomed squaddies contemplating Polaroids of loved ones, b) heroes punching a monitor and then staring into their cracked reflections, or c) big men’s eyes glistening with the tears they won’t allow themselves to cry, then this game will knock you sideways. Otherwise, you might find yourself unmoved.

The appearance of civilian sniper Mikayla promises much-needed scrutiny of the COG “fascists” who quite literally set her world alight. But with depressing speed, her fury is replaced by grudging admiration for the Gears’ military discipline (yeah, fascists have historically been good at that). 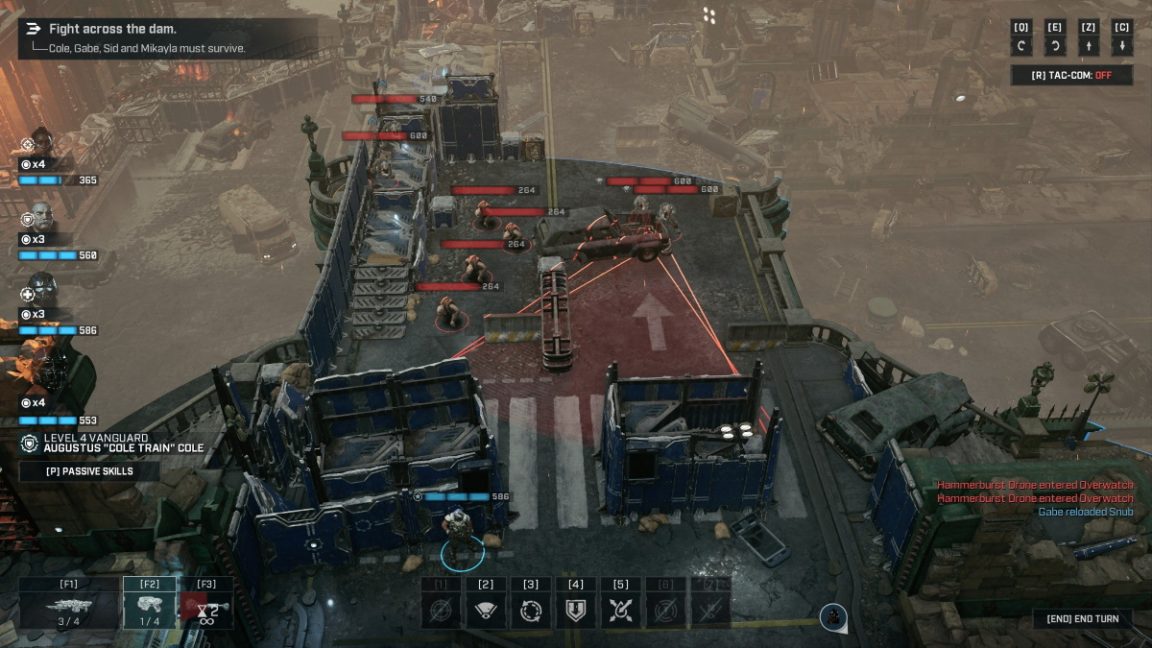 There’s nothing about the central hunt for monster-maker Ukkon that you’d bother to relate to a friend down the pub, or in a review on a games website for that matter. And the pace is slowed still further by ‘side missions’, a misnomer since it’s compulsory to complete a certain number when they come up. Mercifully, the objectives are varied - I've a fond memory of sending Cole on a solo outing to rescue tortured Gears, building his squad as he went.

Ultimately, though, it’s down to a breathlessly dynamic battle system to provide Gears Tactics with surprises. Something as safe as setting your soldiers to overwatch, so that they can shoot at moving targets in the enemy turn, becomes endlessly watchable when those enemies can pinball between killzones, knocked about by bullet spray.

Just today, I witnessed my Heavy accidentally blast apart her own cover with a stray shell from her gatling gun. The pile of palettes exploded, sending her rolling backwards, and me scrambling to come up with a new plan to see off the Locust. Any turn-based strategy game that can successfully mimic the changability of third-person shooters deserves to be celebrated for it, and in its finest moments, Gears Tactics does just that.

Microsoft provided a copy of Gears Tactics to VG247 for review.