Phoenix Point, the long-awaited, twice-delayed game from Julian Gollop, creator of the seminal turn-based tactics series, is more like an expansion than a revolution. So much so that deja vu is impossible to ignore.

And yet, much like XCOM, Phoenix Point manages to get its hooks into you. It’s tense, fraught and frequently frustrating. It can be exhilarating, it can be vague, and it’s sometimes borderline anxiety-inducing. It borrows – or reclaims, depending on your perspective – a lot of the ideas that make modern XCOM excellent and augments and changes bits as it sees fit.

Fair warning, I’m going to be saying ‘like XCOM’ a lot in this review.

Like XCOM, Phoenix Point’s central conceit concerns an extraterrestrial takeover of Earth. In XCOM this was an invasion force come to enslave the human race via mind control while killing off any resistance. Here, it’s a little more subtle and less like Independence Day – a permafrost melt has caused the release of a deadly, transformative airborne bacteria called the Pandoravirus. Much like Netflix’s Annihilation, the mist that carries the disease has the capability to biologically mutate anything it touches.

And so, Earth is fucked.

The Pandora idea is an interesting setup. For one, it creates a whole host of different mutations in the enemies you face. In doing so, that keeps things exciting. But it also devolves the identity of the force you’re fighting. In XCOM, things were much more limited, but it felt like you were fighting this regimented force and you had a real vendetta with individual enemy types. Here, that’s not so much the case, and instead, I just see enemies as fodder. Still, it’s cool when one of the game’s big enemies shows up to decimate your squad. 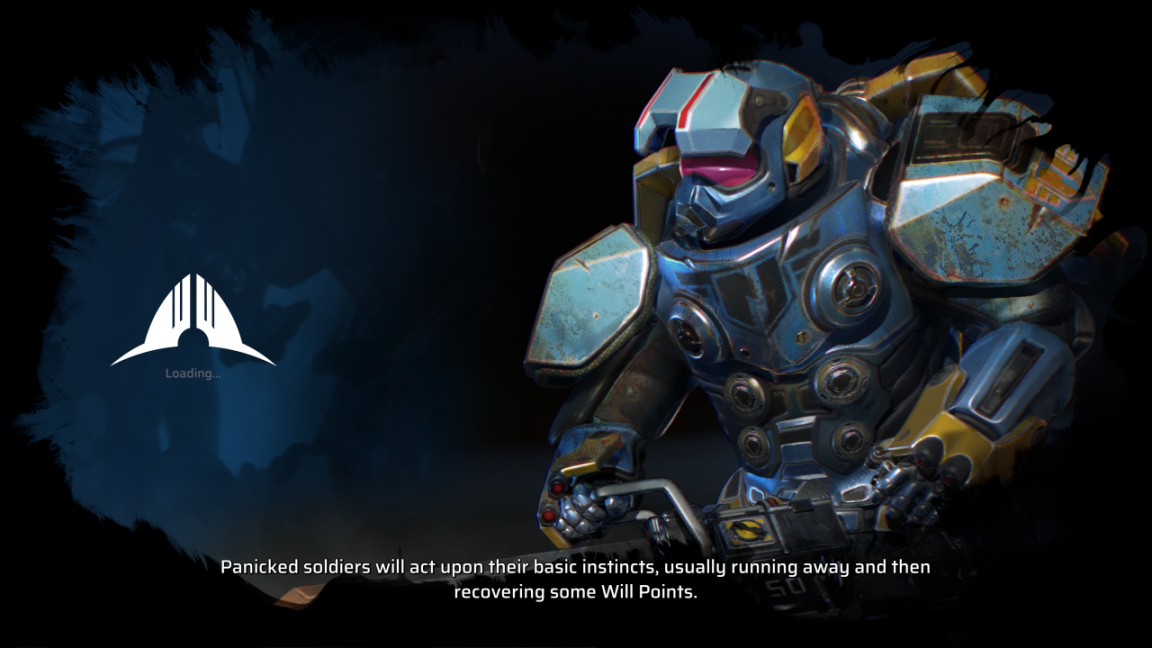 Like XCOM, the resistance force you end up taking over is in a sorry state. As the new incumbent of the Phoenix Project, your job is to mount a defence against the Pandoran mist that threatens to engulf the rest of the surface of Earth. This means upgrading multiple Phoenix bases across the globe, which you tidy up back into shape by repairing broken facilities and building new ones. Everything from power generators to training facilities are up to you to control and maintain, and make all the difference to failure or success.

Unlike XCOM, these bases are numerous instead of being one single location that you operate out of. This gives you the chance to specialise bases, sort of. Ultimately, I don’t think it’s as good a design choice as what XCOM does – I loved the sense of micromanagement with the Avenger, but the micromanagement here is a little overwhelming. There’s just a bit too much freedom, and it takes away from the focus.

Like XCOM, the missions you embark on take the form of tight-knit tactical excursions with a squad of up to eight soldiers – all of which are customisable and upgradeable by you. Missions are usually short – 15 - 30 minutes for standard fare, perhaps longer if you encounter a particularly tricky boss or objective – but the pace is always high once the boots hit the ground.

Sometimes you’re simply defending cargo from alien forces with a view to claim it for yourself; other times you’re in the midst of repelling Pandorans from attacking haven cities; then you’re deep underground in a Pandoran lair, attempting to destroy the spawnery that is increasing the spread of the mist. The missions and locations you visit are varied, and while repetition does set in – these types of games are designed to be played for dozens of hours, and there’s only so much variation one team can make – I never got bored.

That said, I did find some of the missions a bit flat. I think this is partly due to a lack of any real voice over from base command (again, XCOM 2 is coming back to haunt this game by virtue of it being so similar) but certain objectives just didn’t have the gravitas I thought they might. An ambush, for example, never felt quite as ‘oh shit!’ as I hoped it might. 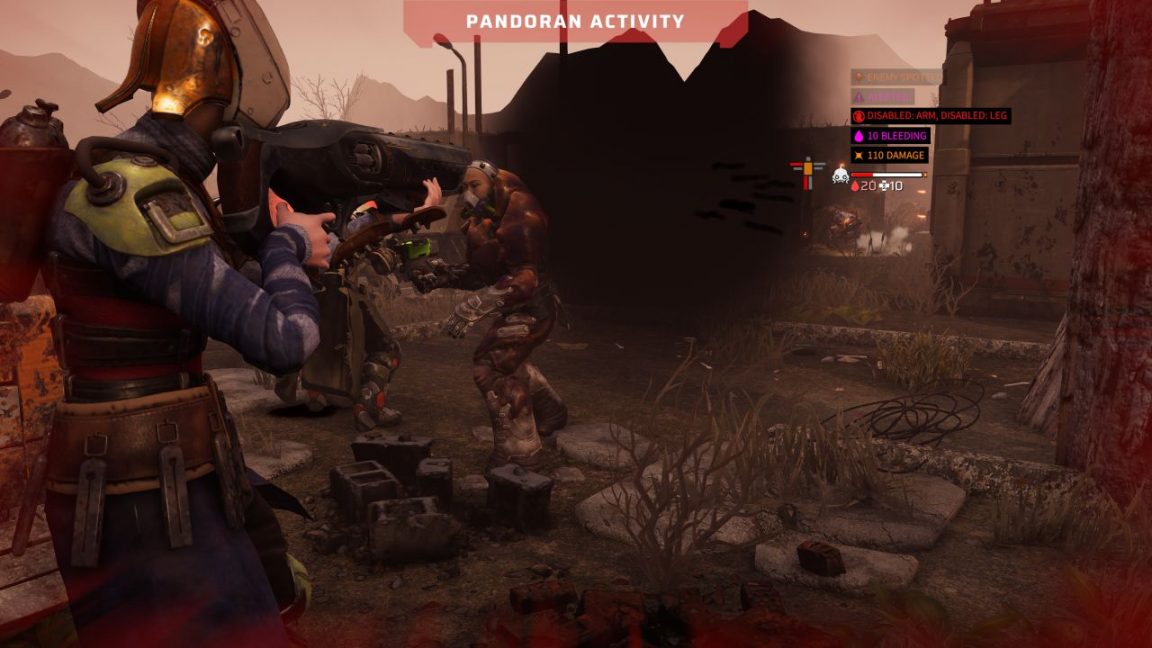 The game is also not entirely clear in its moment to moment combat. Line of sight is a consistent issue that really annoyed me; the game offering me the choice to shoot stuff, but then revealing I didn’t actually have anything in my sights. Gone, too, is the percentage hit meter from XCOM denoting how likely you are to land a successful shot. That’s cool on paper, but in practice, I found Phoenix Point’s solution a much messier one that relied more on guesswork than anything else. Still, the option to individually target limbs on enemies, much like the V.A.T.S system in Fallout, is quite cool – especially for the Sniper class.

Like XCOM, the best way to get the most out of Phoenix Point’s missions is to name your squadmates after people you know. Make them personal – whether that’s calling them “Mum”, “Dad” and “Uncle Derek”; or naming them after the lead characters from your favourite TV show. The game of course offers up randomised names and designs, but by putting the time into renaming and customising the look of your squad, it feels like yours to win and lose with; and those losses feel all the more tangible when they do inevitably arrive.

Squadmates die easily, and failure lies around every corner. There’s definitely a balancing issue here, something I hope is ironed out post-release, but for now, the missions don’t feel quite as fine-tuned as XCOM; a game which had its own difficulty spikes aplenty.

Unlike XCOM, though, Phoenix Point’s overworld makes significant changes to how strategy plays out on a macro level. With the introduction of the Pandorans and the mist-smeared Earth of the year 2047 also comes three distinct factions. This makes the overworld Geoscape experience much more freeform and basically has you exploring an open world to find new missions. Many of these are the aforementioned squad-based outings, but there are also text-based adventure type expositions that see you gathering resources and information without actually going out on mission.

The factions are the Synedrion, New Jericho, and the Disciples of Anu: utopian tech geniuses hoping to repel the mist and coexist with it; paramilitary forces hoping to retake Earth by sheer combat power; and mad cultists who believe the Pandoravirus is some kind of deserved Doomsday sign from God. As such, they also purposefully expose themselves to the virus to allow for human-Pandoran mutations.

All three factions are stuck in a mild Cold War with one another, as well as a firmly hot war against the aliens, and all three of them respond to the decisions you make along the way. Synedrion may ask you to sabotage facilities in either of the other two factions and by doing so you’ll curry their favour to open diplomacy options. But you’ll also draw the ire of the factions you choose to side against. The ramifications for these decisions are mild at first, but dynamic differences start to appear as you get access to faction-exclusive research opportunities and different tech.

You also trade with and recruit soldiers from factions. This took me a bit of a long time to work out – partly my fault, partly the game’s for being way, way too thick and fast in its tutorialisation – but I really like how this works most of the time. It meant that I could, at the start, choose to begin to side against the Disciple cultists because I saw their aims as insane. But I also had the opportunity to recruit their people to my squads, which meant I had some cool alien looking dudes in my ranks that had access to some quite awesome melee abilities. Cake and eat it.

However, it also further dilutes the focus that I think XCOM absolutely nailed. Like XCOM, there’s a doomsday countdown to identify the progress that the Pandoran mist has reached in terms of spreading across Earth. But for much of my 12 - 15 hours, I’ve barely taken note of it – partly because the game makes very little drama out of it, and partly because my focus has fallen with playing around with the faction objectives.

Like XCOM, then, Phoenix Point is a gripping tactical strategy game. Like XCOM, it’s frequently lovely to look at, wonderfully tense, and there’s a lot of depth and customisation to be found in its almost endlessly replayable combat scenarios. I like most of its unique ideas – the more freeform overworld and faction setup – but that overwhelming sense of deja vu is inescapable in much of its design. Regardless of whether this game is borrowing, stealing or reclaiming ideas from the series that inspired it, it sort of doesn’t matter: Phoenix Point is all a little too like XCOM to move the genre forward in any huge way.