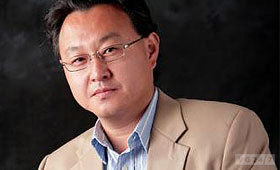 Took the role over on May 16, 2008, replacing Kaz Hirai, who was caretaking after Phil Harrison left the post in early 2008.

Shuhei Yoshida, the Sony executive in charge of creating of managing PlayStation's first-party software portfolio, is, by default, one of the most powerful men in video games. It's pleasant to find that he's also one of the most pleasant, and always adds a splash of honesty sometimes lacking in the the global games interview merry go round.

Yoshida-san spoke to Johnny and I at gamescom today on the back of the global PS3 price cut announced in Cologne last night, giving us insight into the decision to move the console into the £199 sweet-spot, filling us in on PlayStation's upcoming games, and much more.

VG247: The big story from the press conference yesterday was the PS3 price cut. As Sony's games man you must be incredibly excited about that.

Why's now the right time to being the price down to £199?

We had a great year last year. Last year was the biggest year for PS3, and we're very happy with the momentum we continue to have. We have huge titles coming out this Christmas and we're creating new experiences using PS Move, so in terms of both content and price-point, by making it slightly more accessible to people, we believe that this is the time we can reach and grow the audience with PS3. PS3's going to be great value for people who have maybe waiting for the right time to jump on. We wanted to capture this moment.

As PS3 becomes more popular with you bringing the price down, how are you matching that with your software output?

This year we're releasing Ratchet & Clank and Resistance, we just announced the new experience for infamous 2, and, of course, we have Uncharted 3. We're also launching many casual, fun experiences for families using PS Move. I think we have a great line-up of games on PS3 this Christmas.

"Developers are still finding new ways to take advantage of the power of PS3. As long as developers are saying they can do more, I don't see any need for us to move onto something different."

Let's talk about Vita. It's an incredibly important launch for you. I found it interesting that the first thing you talked about in the conference yesterday were the social aspects of Vita, and not the games. Can you explain the reasoning behind that, and talk about how important social connectivity is to Vita as a handheld platform?

Connectivity has always been a core of Vita's concept. For Vita, we really wanted to bring the best portable gaming experience you can get anywhere. It's an always-on, connected device, and the integration of PSN functionality and social connectivity creates new types of experiences using touch, or gyroscopes or cameras.

We're been able to demonstrate these new games and UI since the very beginning of PS Vita's unveiling in January. But for the connectivity side, it's really hard to demonstrate the network functionalities before the hardware is completed. We haven't been able to show too much of that aspect until this time around, so we put a little bit more focus on it this time as people have a lot of questions and lots of interest in the feature-set with Vita and social connectivity.

How difficult a launch is Vita for you? When PSP and DS launched the idea of handheld gaming was clear; now it's much more diffuse as we have mobile phones, iPad and all the rest of it. How difficult are you finding it to carve a niche with Vita?

The difficulty comes in terms of how we communicate the value and the unique proposition of Vita compared to other devices available in the market. The only way we can do it, really, is to show the games in action. Because it's a portable device, people have to put their hands on it: the device is designed so it shines in your palm. That's the challenge we have. A consumer event like gamescom is a perfect opportunity for us to get lots of people to try Vita for themselves and see how the game experience compares to other types of portable devices.

What are your opinions on 3DS? Nintendo's been very quick to bring the price down and they've been under a lot of pressure on a corporate level. How do you feel about this, considering you're about to enter the market with a next generation handheld?

I own a 3DS, and I've been using it. We didn't price Vita relative to 3DS or anything; we always planned to price Vita as the price we have announced. I think Nintendo's move was trying to match expectations. I don't know. I think each device has to be priced to the value it creates. We are totally confident that the price we've put on PS Vita is the right one. We can wait for the launch to see how people react to the games we're releasing.

Yesterday we were expecting maybe price points and release dates for Vita. Is this coming at Tokyo, maybe?

In terms of release date, we've been saying Japan this year and early next year for the rest of the world. Hopefully we'll be able to be a bit more specific at TGS, at least for the Japanese launch because that comes first.

Going back to PS3. You appear to be moving into the back half of its life-cycle. Are you looking ahead, or beyond it? Are you still firmly entrenched in PlayStation 3 development?

When you look at the content that our teams and third-parties are releasing this Christmas on PS3, it's amazing stuff. Developers are still finding new ways to take advantage of the power of PS3. As long as developers are saying they can do more, I don't see any need for us to move onto something different.

How important is Move to you now? It played quite a large part of that presentation yesterday. Is Move and motion control in general something you're still serious about building into your software portfolio going forwards?

Absolutely. PS Move has been a development of our R&D activities, even since the beginning of the PS2 days. We had EyeToy on PS2, the controller-less experience with augmented reality, and that was improved with the launch of PS3 and the PlayStation Eye. PS Move was a much bigger step for us in terms of creating the experience that puts you in the game.

"As far as the Gran Turismo team's concerned, they are still working on updating the games, so they're just shifting to the designing and concepting phase of the next project. It's going to take a few years."

We are totally excited that the experience you can create with PS Move can't be replicated using traditional controllers. To answer your question, there's a lot more we can do using the PS Move technology, its robustness, its preciseness and the fact it's easy to get into. We'll continue to create dedicated experiences using PS Move, as well as to adapt PS Move functionality into other types of games, as we've been doing with some FPS titles. With LittleBigPlanet we're adding functionality so that you can create PS Move content and PS Move games. We continue to do both.

We ask teams to look at what they can do, to see if it makes sense. Some developers are skeptical even before trying Move, but many teams have found they can use PS Move because it's designed as a game controller, with low latency and preciseness, and it doesn't take up too much resource from the hardware. That's what I ask. And if it makes sense and the team believes they can add value to the games then they do it, and if they don't they don't.

I just want to ask you a few questions about the studios. Media Molecule said recently that it's starting to move away from LittleBigPlanet. Are they still continuing to make…

Yeah. They're totally involved in evolving and advancing LittleBigPlanet. What they're talking about is that they're not actually developing new content for LittleBigPlanet. They have a group of developers working with them to create the new chapter of LittleBigPlanet, like LBP Vita or additional Move content. That means that the core team of Media Molecule – and it's still a small team – is able to work on something totally new. They're continuing to do both.

"The Last Guardian team has been making progress. It's been very difficult in terms of seeing the progress: not as fast as we'd been hoping for, and the team has been under big pressure. But we're still making progress, so I'd like to continue to support and keep waiting for great news sometime in the future."

There are a couple of significant holes in the software line-up you've been talking about this year. There's been no mention of any more Gran Turismo and we're still waiting on a date for The Last Guardian. Is Tokyo going to shed more light on this, or are we going to wait a little bit longer?

I'd say it could be a little bit longer. As far as the Gran Turismo team's concerned, they are still working on updating the games, so they're just shifting to the designing and concepting phase of the next project. It's going to take a few years.

The Last Guardian team has been making progress. It's been very difficult in terms of seeing the progress: not as fast as we'd been hoping for, and the team has been under big pressure. But we're still making progress, so I'd like to continue to support and keep waiting for great news sometime in the future.

Johnny: How does the inclusion of Sucker Punch fit into your future plans?

Thank you for asking. It's incredibly exciting to shift into this new relationship, but when you look at you history of acquiring developers – Naughty Dog, Evolution, Media Molecule – we always worked together as a publisher and a developer for a few years and had the experience of creating great IPs together. We have a strong relationship and IPs that we want to continue to evolve. It's only at that stage that we sit down, and because of these trusting relationships and IPs we've worked on together, it makes sense to make it a bit more official and remove ourselves from negotiating the contract and the deal every time a new product finishes.

In terms of Sucker Punch, they've been making games for us and with us for the past 10 years, and they're continuing to make games with us in the future. From that standpoint there'll be no change. But because they're now part of our family, it's very exciting to get them a little bit deeper into the SCE group, and not just making games: we can involve them in some of the R&D activities that we've been working on. That's extremely exciting for us and, hopefully, for them as well.