Forza Horizon 3 is truly a graphical showcase for Xbox One. 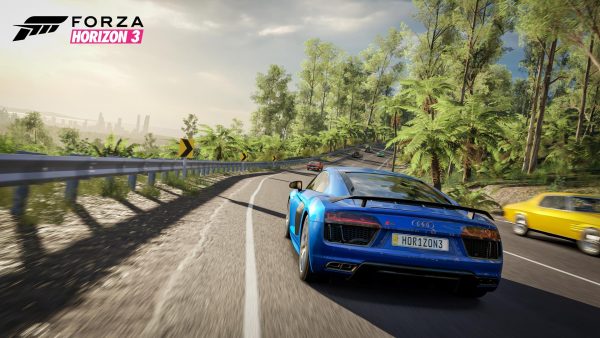 Forza Horizon 3 is the first one of these to launch on PC day and date with Xbox One. Though the PC version could really use some performance optimisations, when it comes to graphics, it's one of the best looking racers available.

But just how much better looking is the PC version - if ever - compared to Xbox One. In the video below, Digital Foundry attempts to answer this question by recreating the same scenes on both versions and seeing whcih of the two comes out on top.

The site locked the game to 30 frames-per-second, using the ultra preset at 1440p. The Xbox One version of course runs at 1080p/30fps, with a healthy dose of AA.

The Xbox One version appears to not match any general setting quality on PC, but rather uses a mix of various different ones depending on the scene. Objects get drawn-in at roughly the same distance away from the car, though PC has the slight edge.

For textures, PC comes out ahead again with slightly higher resolution textures in use than on Xbox One. The same can be said for texture filtering, the quality of which is better on PC, though only noticeable in resolutions higher than 1440p.

For motion blur and shadows, both versions appear to be very close. The same is also true for reflections quality, and the Xbox One appears to be using the high preset here, though it's similarly not really noticeable.

Horizon 3 is out now on Xbox One and Windows 10 PC.