“Tiptoe down to the lonely places,” sings My Bloody Valentine’s Bilinda Butcher on ‘Loomer’, her sweetly lethargic melody rising up from a static haze of tremolo guitar, electric as Midgar’s skyline.

Loomer is the second track from Loveless; the same album advertised by a billboard overlooking the cobblestones where Aeris the flower girl picks herself up from a fall, dusts off her dress, and meets Cloud Strife for the first time.

The album’s title would later be absorbed into the universe’s canon as a stage play in Crisis Core, but its inclusion here remains opaque. Still, when Bilinda Butcher sings about holy places, lonely places, and “sunshine faces carrying their heads down”, it’s hard not to picture Midgar itself. A city of slums and superstructures, secret police and ID checks, social stratification, and the profound personal isolation that blossoms where technology grows faster than community.

The future Midgar displays is progression without progress. The industrial dominance and colonial monoculture of steampunk without the romance, and the noir paranoia of cyberpunk without, at the very least, the dystopian consolation prize of fibre broadband. Perhaps most noticeably, looking back in hindsight through a lens smeared with 2019’s regurgitated PR spittle, Midgar is a city with its politics splashed across it in searing neon.

The city was once several smaller settlements, developed into a sole metropolis by the Shinra energy corporation.This was achieved by constructing a circular plate above the separate towns and villages, absorbing their geographies, communities, and identities into a singular city. Where once these places had names, they were now numbered sectors. Those residents wealthy enough to buy dwellings on the upper plate did so, while the poor were left below in an act of gentrification so comically evil that it saw Midgar’s marginalised residents rapidly priced out of actual fucking sunlight.

From the centre of the disc rises the panopticonic Shinra building. A helpful reminder that - as Tony Soprano puts it - shit runs downhill, money goes up. An energy company that eventually gained the status of a world government through force of arms, Midgar’s financial dependence on Shinra brings to mind a vast, sci-fi reimagining of the company towns that used to spring up around industrial hotspots and are now making a resurgence thanks to monolithic tech giants. Facebook owns 56 acres of land in California. Amazon’s campus in Seattle is expected to grow to 12 million square feet - housing 50,000 employees - in the next five years. When your boss is also your landlord, you run the risk of losing a lot more than your job if you ever decide to organise. 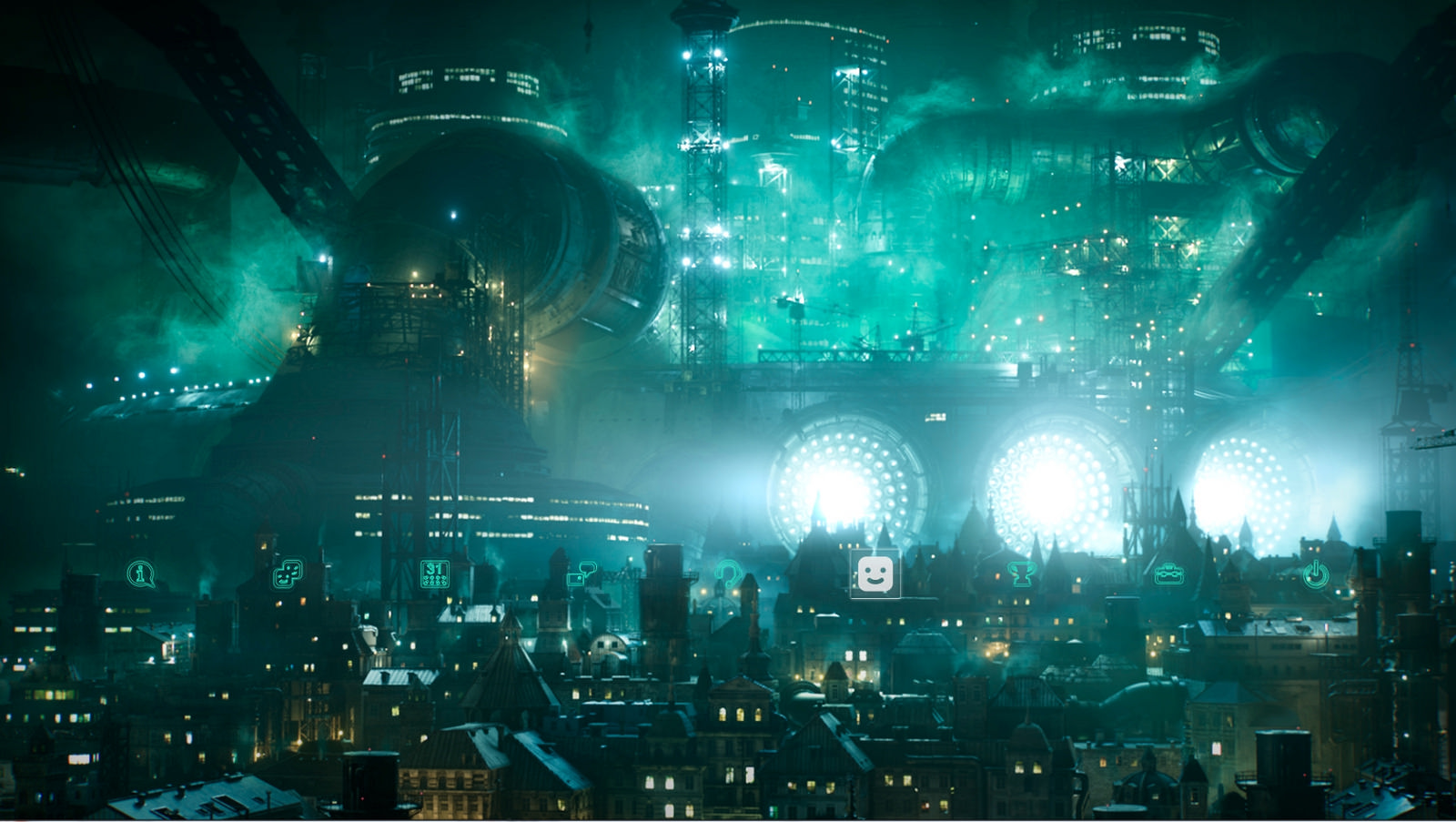 Midgar looms against the skyline as an embodiment of this prophetic dystopian trope of monolithic corporations snaring employees in privatised economies. We’ve already seen some Amazon warehouses ‘gamify’ labour by offering ‘Swag Bucks’ to ‘associates’ who hit quotas. It’s nightmarishly comparable to ‘company scrip’: credit issued by a business in lieu of actual cash and only redeemable for products made by that business, historically at inflated prices. Imagine that for a moment: Monopoly money with Bezos’ shining dome on, still attached to his neck and everything. You only have to look at the growing crisis of working poor - employees who earn just enough to allow them sustenance and shelter (often their own cars) so they can turn up to work the next day - for the lines between employment and indentured servitude to blur.

For Midgar’s citizens, it’s Shinra’s pervasiveness in every aspect of their lives that’s so chilling. You clock off your Shinra job and return to your Shinra-rented home and drink Shinra bottled beer in front of Shinra sponsored news broadcasts on televisions powered by Mako energy.

Travelling through the city, you’ll meet folk living on subway trains, and putting on their best clothes to scavenge for valuables, dreaming out loud about the sleek and shimmering city above. But it’s the buildings in the slums that tell the most revealing stories about what it’s like to live there. The repurposed industrial scrap that makes up the architecture is both a gutpunch in its stark depiction of poverty and a raised glass to working class ingenuity. Folk set up shop in busses and live in huge rusted pipes. Furniture is a scrappy bricolage of steel crates and wiring. Ramshackle houses creak under tin patchwork roofs. If your dad knew a bloke who had a cousin who chipped PS1s so you could get the games cheap, or fixed up bikes, or sold cigarettes off the ferry, you’ve seen a more everyday version of this drive to make ends meet - impromptu economies and means of existence, popping up like defiant saplings through strangling concrete. 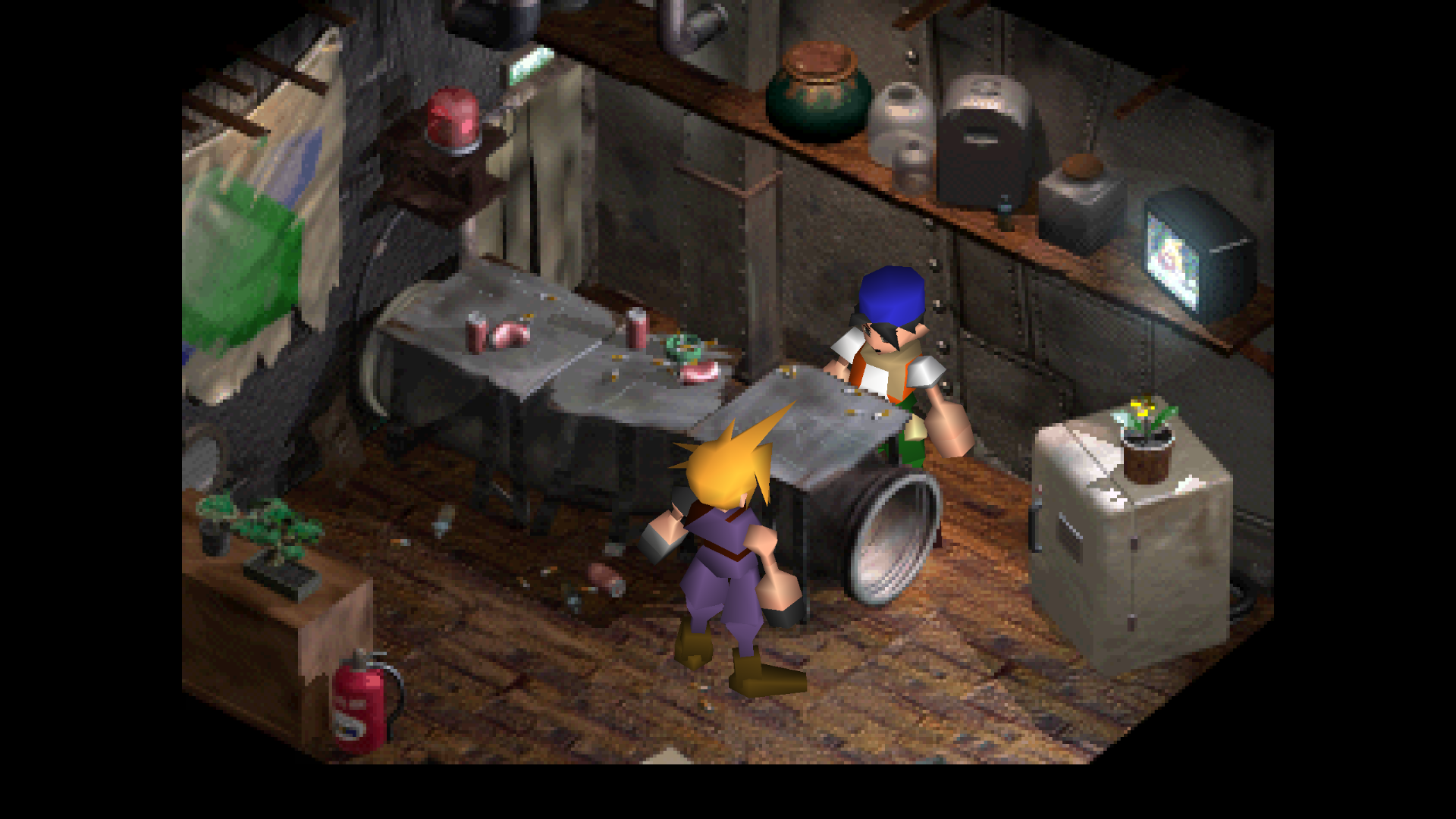 A short while past Final Fantasy 7’s introduction, Midgar’s architectural symbolism for the poor being crushed by those above them takes a tragically literal turn. Citing retaliation against resistance group Avalanche as an excuse, Shinra sends its secret police force, the Turks, to destroy the support that holds the gargantuan plate aloft the Sector Seven Slums. The plate topples, obliterating everything below in a single act of callousness. From his comfortable office at the zenith of Shinra tower, the president listens to classical music and surveys the damage below.

The rich will eventually remake the city in their own image, or at least to their own benefit. Whether through deliberate action (see Camden Market, or the displacement that occurred in the wake of the London Olympics, or continues to occur in London), or else negligence (see the Grenfell Tower tragedy.) Writing for The Guardian, Aditya Chakrabortty recently considered how paltry acts of conspicuous altruism gives the Paris elite free reign over the reconstruction of Notre Dame cathedral. As wealth funnels upwards, only the rich can afford to preserve the past, and so any remaining proof of history becomes a testament to the achievements of a select few. Public landmarks and spaces are consolidated, privatised, and branded. Gucci presents: Notre Dame cathedral, rebuilt with funds siphoned from public coffers. Shinra presents: Mako energy, siphoned from the planet itself. It seems oddly prescient, as we watch the Tories carve up and privatise public services, that the one noticeably public park in the slums ends up covered in smoking debris after the plate’s collapse. In makeshift, dirt-paved alleys, derelict dwellings share space with discarded mecha arms and carved Greco-Roman columns. Even before the plate falls, Midgar’s slums are, quite literally, the scrapheap of history. 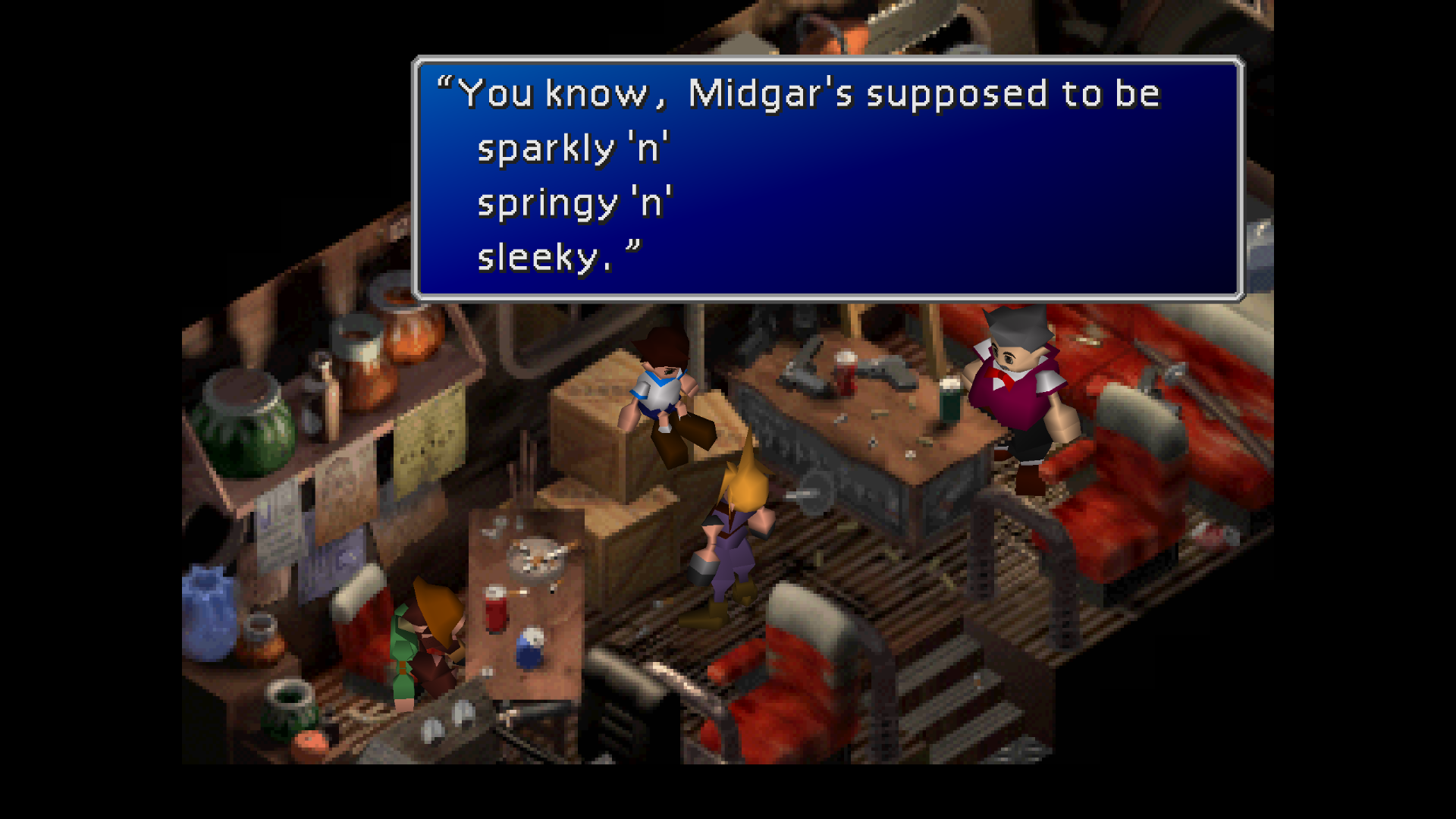 In contrast, the “sparkly n’ springy n’ sleeky’ city above is a dehistoricized, late-capitalist utopia. A place where both the past and future are flattened into a faux-spiritual ‘now’. The upper floors of the Shinra building contain not only canteens, but gyms, lockers, and beds. It’s reminiscent of a pervasive corporatised bliss culture, where ‘self-care’ is championed not as a means to achieve personal happiness, but to increase productivity. Socialising becomes ‘networking’. Artistic expression, discussion, opinion, and even the pathologic self-surveillance of our entire waking lives in the form of liveblogs, becomes ‘content’. We learn to see everything in terms of capital, until work/life balance becomes ‘work’ and ‘time we spend recovering’.

Geographer Maria Kaika, as Paul Dobraszczyk notes in Future Cities, has said that skyscrapers exhibit a “pathological self-absorption”, severing them from the rest of the city. I’ve mainly talked about art and plot here, but I think it’s interesting to look at how Midgar uses the conventions of traditional JRPG exploration to make a point, too. The usual town/dungeon split is reconfigured. Midgar’s most expansive dungeon is not some dank subterranean labyrinth, but a glowing skyscraper. Although a few residents might tell us to piss off once we’ve entered their homes and exhausted their dialogue options, the houses in the Slums are largely open, welcoming, and freely explorable. In contrast, the Shinra building is segmented, isolated, and deeply paranoid of outsiders. Our journey upwards through the tower is us steadily climbing the corporate ladder, gaining access to ever higher strata by collecting keycards. If there’s an inspiring message here, it’s this: Illegitimate power and corporate greed is always terrified of revealing its inner workings to anyone not already indoctrinated into the necessity and legitimacy of its own special brand of bullshit. 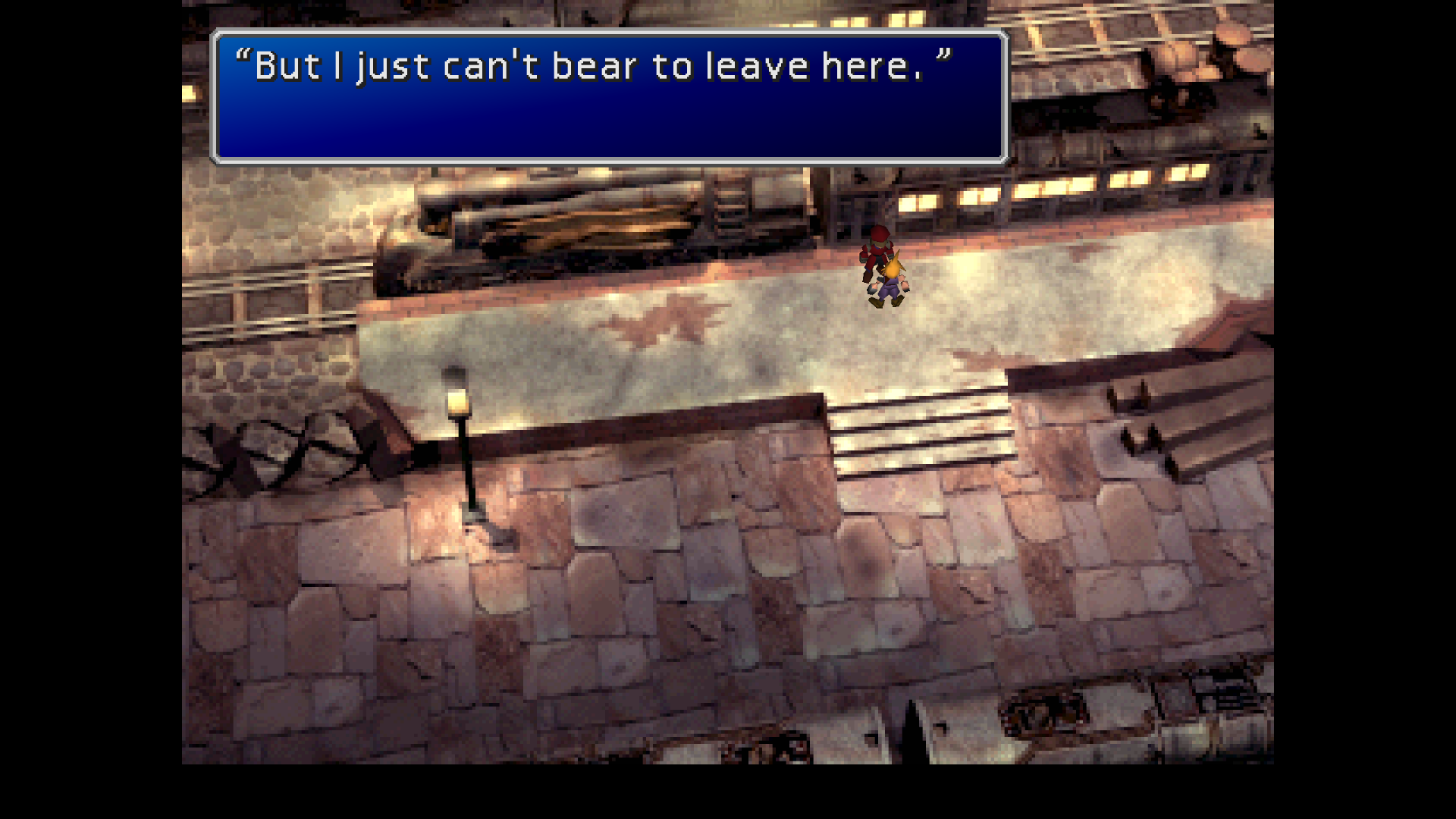 There’s another of Midgar’s dungeons that stays with me, and that’s the train graveyard that Cloud, Aeris and Tifa emerge into from the sewers below Don Corneo’s mansion. Final Fantasy 7 is replete with both explained and unexplained supernatural elements, but I don’t think it’s a coincidence that the enemies you encounter here are actual spirits. The train graveyard is an urban analogue for a fantasy mausoleum: its spooks are the spectres of faded dreams and cherished memories that haunt this liminal space between inertia and motion. As anyone from the arse end of nowhere will tell you, train stations represent more than just a means of transportation. They represent freedom, and upward mobility, and the chance to build something better, somewhere better, even if you don’t quite have the means or the drive to leave yet.

There’s a crimson-coated train guard that stands on the platform. When you speak to him, he’ll start to reminisce about the hopes and aspirations he’s seen wither. If you speak to him again, he’ll snap back into conductor mode, and repeat the same cold, functional information about train times, forever. It’s in those brief moments he lets himself slip that Midgar’s true soul reveals itself, I think. A city of bright eyed souls, crushed by the nightmare of late capitalism to the point where, to paraphrase Frederic Jameson, it is easier to imagine the end of the world than a train to somewhere better.

With Final Fantasy 7’s remake looming, it’s not the updated music or visuals or combat I’m most looking forward to. It’s seeing Midgar expanded, and its largely voiceless inhabitants given their turn in the neon spotlight. It’s the side stories, the lost laments, it’s taking another trip down to the lonely places.