Far Cry 5 doesn’t hold your hand as much as some Ubisoft games. The world isn’t peppered in towers to climb, unlocking points of interest on the map. Instead, you are encouraged to explore, to chat to civilians, and to unlock missions by nosing around.

If you want to unlock all the weapon slots so you can go into fights fully-loaded in Far Cry 5, it’s probably best to not explore too far at first, mind you.

How to unlock more weapon slots in Far Cry 5 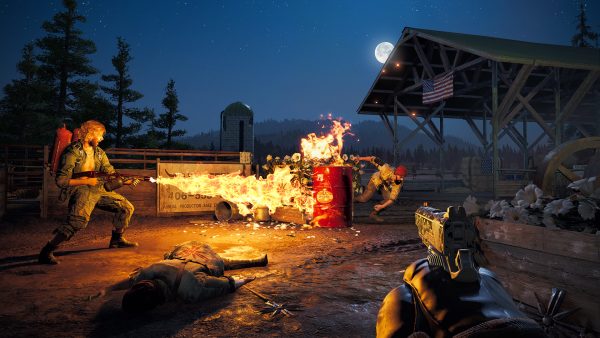 You start out Far Cry 5, once the game kicks off properly, able to carry two firearms, a bunch of melee weapons, and a selection of throwables. While you’re absolutely still a force if you balance your loadout, you have to make sacrifices.

Most will probably spend the first chunk of the game with a silenced pistol - good for stealth and when in a pinch - and an assault rifle, which works in most situations. Still, you’ll be itching to carry an explosive weapon and a long-range rifle. That’s why you will want to unlock the other two weapon slots as soon as possible.

To unlock the third weapon slot, you will simply need to buy the perk. It costs eight perk points. See our perk points guide for tips on how to bag those.

For the fourth, you will need to have a confrontation with one of the Seeds - one of the cult leaders dotted around Montana. The first you will likely encounter once leaving the tutorial island is John Seed. He lords over Holland Valley, his catchphrase, ‘Yes’, erected on a distant hillside like a messed up Hollywood sign.

You need to fill up John Seed’s progress bar to face off with him. Do this by completing missions, side quests, freeing civilians, liberating compounds, blowing up cult property, and killing cult VIPs. Every third of the bar will trigger a story mission.

Once you’re there, you will have a showdown with him. The perk to get the fourth weapon slot is unlocked after this fight.

The trick to unlocking it quickly is staying in the same region. You don’t want to spread yourself out, because the fourth weapon slot in Far Cry 5 is only available once you take care of one of the Seeds.

Want more? Here's how to get perk points in Far Cry 5. Still hungry? Here are Far Cry 5 perks and playstyles.