Castlevania: Lords of Shadow - Mirror of Fate is the new vampire-hunting 3DS epic from Mercury Steam. Dave Cook plays the first three hours to see if it can match the brilliance of its handheld predecessors.

The first Lords of Shadow launched in 2010 and followed Brotherhood of Light member Gabriel Belmont. It is a reboot of the entire series.

Lords of Shadow ends with a colossal twist, one that sees Gabriel becoming Dracula, villain of the Castlevania canon and sworn enemy of the Belmont clan.

Out this year on PS3 and Xbox 360, Lords of Shadow 2 will continue Gabriel's descent into darkness. You can see the game's VGA trailer here.

Lords of Shadow - Mirror of Fate bridges the gap between both games, charting the story of Trevor and Simon Belmont, son and grandson of Gabriel. Check out Konami's latest trailer here.

The original Castlevania: Lords of Shadow was a revelation. Not only did it prove - at long last - that the series could happily exist in the third-dimension, but it showed just how a reboot should be done. Mercury Steam's respect for the source material was evident throughout, even if the game's ending tore up almost 25-years of canon with its final, shocking twist.

With Lords of Shadow 2 on the way later this year, Mercury Steam has developed 3DS title Mirror of Fate to bridge the plot gap. It's the studio's take on Konami's 'Metroidvania' series - a string of Castlevania titles that began with PSone epic Symphony of the Night, and spawned the truly superb Dawn of Sorrow. They're hard acts to follow.

Mirror of Fate focuses on the Belmont clan 25 years after Lords of Shadow protagonist Gabriel first fell into darkness and became Dracula. It also stars his son Trevor and grandson Simon, who also happens to be the star of Konami's first Castlevania title. Throughout the plot you'll play as all three characters, but the meat of my hands-on session saw me in control of Simon.

If I had to describe Mirror of Fate simply, I'd call it a 2.5D take on God of War. There is plenty of platforming, tons of ledges to be climbed and a heavy-hitting combat system rammed full of parries and balletic whip attacks. It's uncanny how the game's combat feels like a third-person hack-n-slash title, given its restricted perspective.

There are light and heavy attacks, dodge rolls and even executions if you manage to parry an enemy into a stunned state. You'll tussle with a range of familiar Castlevania ghouls, beasts and abominations - and yes, the Harpies are still a total pain in the arse. 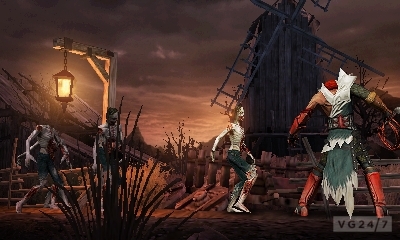 Pesky zombies attack in packs. But make
for a great source of quick XP.

It's certainly a challenging battle mechanic, particularly when facing bosses. An early scrap against Dracula's right-hand man and Castlevania regular Death is great fun, while a rather seductive encounter against a siren proves to be a real test of reflexes and skill.

Felling creatures nets you XP which automatically unlocks new combos and abilities, and this progression sits at the beating heart of the 'Metroidvania' arc. You'll compulsively try to uncover all of the lower screen's grid map and search every corner for hidden paths and upgrade chests.

Your first objective is to find the Combat Cross - a whip extension that lets Simon swing over grapple points and rappel up or down vertical surfaces. Many areas can't be accessed until you have it, so it's handy that you can now drag and drop personalised sticky notes on the map to highlight an impasse. Getting lost in previous Castlevania games could get tiresome, but this mechanic helps avoid needless meandering.

Platforming and whip combat aside, the Belmonts can use secondary weapons such as Castlevania's classic axe or bottle, and in classic style, these are topped up by finding hearts stashed in the world. Simon even unlocks familiars - another nod to Symphony of the Night - which give him certain buffs such as auto-blocking or ranged crossbow attacks. 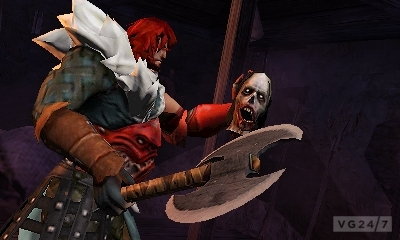 You can't beat the classic axe for
a spot of ranged decapitation.

All of this combines to make an experience that simply shouldn't work. I say that because titles such as God of War and Bayonetta are firmly third-person experiences, yet somehow Mercurcy Steam has translated the same feeling as those IP - the challenging boss battles, the twitch combat gameplay - into something that feels like a classic, 2D adventure.

Most importantly, it feels like a Castlevania experience, thanks to the gloomy atmosphere and another truly outstanding soundtrack for the series. The acting - while largely shouty and Scottish - is as puffed out and hammy as ever, but in a deliberate manner it seems. While it lacks the fast pace of Dawn of Sorrow or Portrait of Ruin, Mirror of fate still manages to swing with the best of them.

Whether or not this faithful Castlevania vibe continues for the whole of its alleged 20-hour span remains to be seen - plus there's the little matter of what Alucard's doing snooping around the castle - but as a taster, the first three hours hint at what could be a lovingly-prepared handheld reboot for the series. We'll know more once the full game launches on March 8th.

Disclosure: To write this preview, Nintendo loaned Dave a locked copy of Castlevania: Lords of Shadow - Mirror of Fate on Nintendo 3DS. He returned it after writing this feature.