If you're curious about Cyberpunk 2077 day length, it appears to be significantly longer than that of The Witcher 3, meaning you'll have more time to explore Night City before, well... nighttime.

The news comes from Reddit, where one poster attempted to calculate Cyberpunk 2077 day length while watching Night City Wire with a stopwatch. They concluded that one in-game hour was approximately 420 seconds. They were wrong.

"My timing seems to have been off by .5 seconds," wrote the poster. "It has been confirmed 3 hours = a full day in-game time."

They proceeded to note that a full day in The Witcher 3 lasts roughly 1 hour and 36 minutes, meaning that Cyberpunk 2077 day length is almost twice as long as that of CD Projekt Red's previous blockbuster.

For the sake of clarity, it's probably worth noting that this is over three times as long as a full day rotation in Red Dead Redemption 2, which has days lasting about 48 minutes. Days in GTA 5 are also 48 minutes long, so having a full, three-hour day in Cyberpunk 2077 is pretty huge. 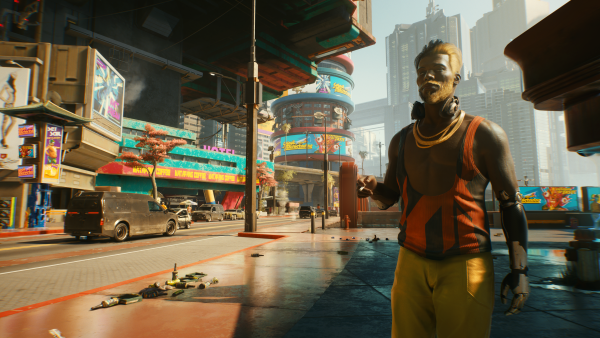 In related news, it was recently revealed that Cyberpunk 2077 will be censored in Japan, mostly in terms of depictions of sex and violence. If you'd like to see more of CD Projekt Red's upcoming RPG, be sure to check out 25 minutes of raw, unedited Cyberpunk 2077 gameplay. Also, don't forget to check out our impressions after spending four hours with a hands-on demo.

We've also noticed some other cool details about Cyberpunk 2077 since last week's Night City Wire event. For example, Mox boss Judy Alvarez has a Radiohead lyric tattooed on her arm (a lyric from Pyramid Song, off of Amnesiac). Also, you can pet the cat in Cyberpunk 2077.

Despite having 1 hour and 36 minute-long days, loads of Witcher fans are finding free time to draw up how Witcher characters might look in Cyberpunk 2077's custom character creator. Here's cyberpunky Geralt, and here’s cyberpunky Ciri.