The Burnout series exists because of Thrill Drive, a Konami coin-op game about driving as fast as you can through traffic, weaving and skidding between cars - hit another vehicle and it’s all over. The first Burnout game was similarly brutal.

The introduction of Crash Mode in Burnout 2 made smashing your car into another vehicle an event of its own, with higher scores awarded for causing the biggest pile-ups at busy junctions. Crashes weren’t just a fail state any more: they were part of the game’s soul.

“Burnout 3 was about making the crashes more spectacular and making them a part of gameplay,” Criterion GM Matt Webster tells me. “I think we called it ‘aggressive racing’. Most racing games have you keep away from your competitors, whereas we wanted to make it a lot more like you see in a movie, with people slamming into each other. If you can take people out and cross the line in first position, we thought that was way better. ”

Suddenly, crashes were no longer a sideshow, it was a way to get an edge over the competition, shunting them into a wall in a shower of sparks as you boost to the horizon. It also gave races an intimate feel - rather than chasing your opponents or watching them in your rearview, rival cars were in the next lane, scratching up your paintwork. 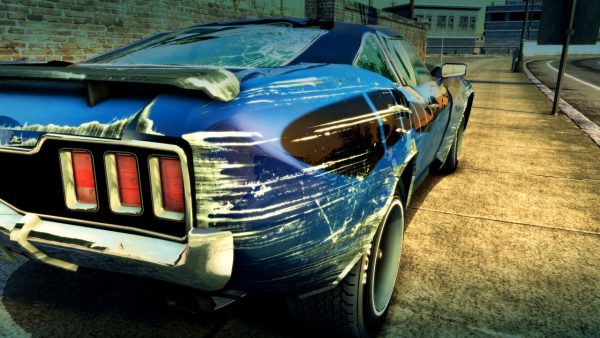 Criterion was seduced by the power promised within the PlayStation 3. The studio thought the new hardware would allow the developers to let their imaginations run wild, so they set to work on the most ambitious Burnout yet. Criterion had to figure out how to make its racing series work in an open world, introduce a convincing traffic system, implement metal defamation for crashes, and make it seamlessly playable online, all while the game runs at 60fps.

“It was like going to the moon,” Webster remembers. “It was very, very hard. A lot of it comes from iteration. You have a point of view - we think we want something akin to a grid-like city area, but we want to go out into the rurals, we like the mountains. We had that rhythm, but until you’ve got high quality car handling you can’t test what things work. You have to move things around to match the car handling.”

Once Criterion got to playtesting the looping and intersecting roads the developer had created, the team realised something: an open-world racing game should let you break the rules. It shouldn’t all be about the roads. “What takes it beyond closed circuit racing is choice and variety,” Webster explains. “Suddenly it was backstreets that became interesting. And shortcuts. How can you make your knowledge of the world give you a competitive advantage? That’s why we didn’t block out the race routes.” 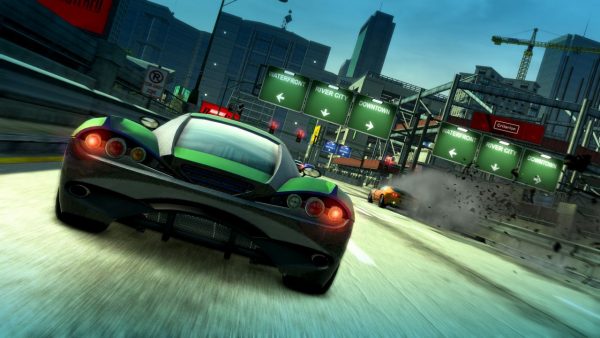 Burnout Paradise demands that you learn it. This is a racer where the controls are so tight they feel like an extension of yourself. A successful race feels like an out-of-body experience, and navigating the roads becomes similarly intuitive once you have spent a few dozen hours drifting through Paradise City.

“If you were going to tell me where the nearest petrol station is, you’d be like, ‘Head down towards that street, do a right at the roundabout, then go towards the high street’,” Webster says. “We talk in those ways, so that’s why we began naming the roads. Then we realised that naming the roads meant we could add gameplay to every road.”

In the finished map, there are roads where the biggest obstacle is the traffic, there are routes that require fishtail turns as you whip around corners, there are stunts, and there are sandbox areas that act as playgrounds for your car.

“It’s not just back-alleys and side streets, it’s dropdowns and jumps,” Webster continues. “The freeway going around the outside. The beach areas. Then we started opening up. Once we discovered we had jumps and flat spins and barrel rolls, we were suddenly like, ‘Oh, okay, this play area has suddenly become really important’.” 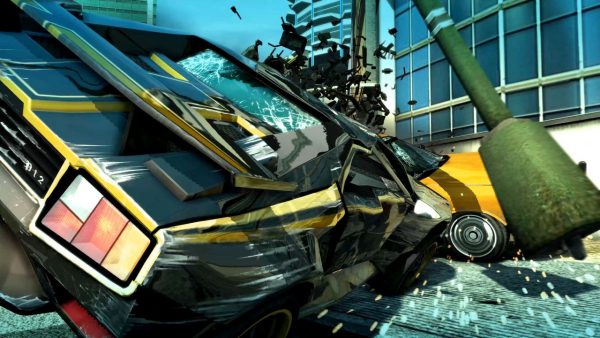 Areas like the airfield and quarry were added later in development to become hotspots where players can meet and dick about together, away from the gridlocked city streets. Even the main raceways were more complex than you are probably imagining, however. Creating a believable traffic simulation that served the gameplay was one of Criterion’s biggest challenges.

“You have to have a credible simulation, whether it’s a physical simulation underpinning the cars or a traffic simulation,” Webster explains. “Because it’s aping the real world, you notice it when it’s wrong. It has to have a degree of variety, but it also has to serve a gameplay purpose. It’s not about being academic and creating a traffic simulation, it’s about creating one that looks right but doesn’t get in the player’s way.”

Underpinning the simulation is a set of rules. Firstly, cars must never be twinned - traffic never drives in parallel and there must always be a route through. Likewise, when you zip over a junction, cross traffic is designed to make it feel like there is a near-miss every time.

“It’s actually a very creative traffic simulation,” Webster says. “One of our technical directors, who is still here, there’s still a button that triggers him: telling him the traffic is steering into me. That was a constant challenge. When you have a traffic system that reacts to what the player is doing and the player can change direction so quickly, how do you have traffic that doesn’t get in the way while making it feel like a near miss?”

The entire thing was one massive learning process for Criterion, which is something the studio distilled into Burnout Paradise’s biggest DLC release: Big Surf Island.

“The design of Big Surf Island was our ultimate expression of three years of development,” Webster says. “We discovered we could open areas out and make much more drivable surface beyond just the road ribbon. That’s the biggest lesson we learned: the road network is just the starting point. That’s why we made the buggy as well. How much gameplay opportunity can we throw into this place? How do we ramp it up and make people feel like they can drive anywhere? Through the handling that we’ve got with these vehicles, they can get anywhere very quickly.”

Criterion has always been an adventurous studio, whether the team is making starfighter sections for the latest Star Wars game, trying its hand at a first-person shooter with Black, or attempting to craft an open world that’s navigable at 200mph. If Paradise City is the result of Criterion learning on the job, I can’t wait to see what the team does next.

Want to go back to Paradise City? Check out our review of Burnout Paradise Remastered.