No one makes arcade racing games like this anymore - how does Burnout Paradise feel in 2018?

When you think about Criterion’s Burnout series, what sticks out? Perhaps it is the crashes: the twisted, crumpled metal; the sparks; the madcap destruction; and the debris splintering from cars, careening through the air in slow motion. This is a series that fetishised car collisions within dedicated crash modes where you rack up points for smashing your driverless car into a busy junction, after all.

Playing Burnout Paradise today, something else stands out: the speed. If Burnout Paradise’s cars did have drivers, the G-force would eject them straight through the rear window as soon as you boost, the driver’s seat folding backwards under the pressure. The sense of speed is akin to watching Bruce Lee flail his nunchucks about while high on amphetamines.

The open world of Paradise City is a web of interlocked roads, from the winding trails of White Mountain right on through to the gridlocked city streets. These raceways are a test of how long you can hold down boost without losing your nerve, battling against oncoming traffic, barreling over impossible jumps, and smashing your way through side roads, never letting up as you make tiny adjustments to avoid fucking your car into a wall. 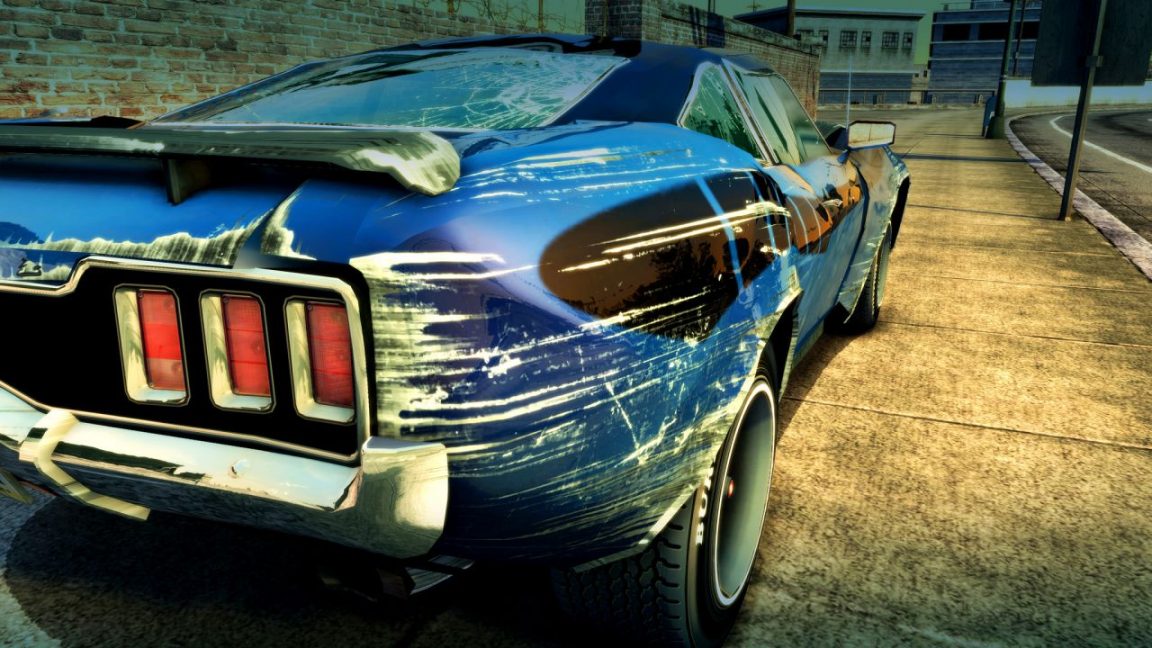 "The resolution is higher and it looks sharper as a result, but you won’t mistake this for a current-gen game"

The way Paradise City is designed turns speeding into euphoria - roads twist and intersect with the freeway, looping around, funneling you through, and you are never more than a few seconds away from joining a relatively straight road where you can gun it. Revisiting this automobile playground in Burnout Paradise Remastered still feels fresh. When you are in the zone, the world melts away and you become an unstoppable blur, like a particle hurtling through the large hadron collider in CERN’s underground lab.

That said, it takes a while to adjust. Burnout Paradise’s races are not predetermined routes. Instead, you have to find the fastest path to the finish yourself, using a compass at the top of your HUD and the minimap at the bottom. It can be frustrating when you are finding your feet - what seems like a shortcut may bring you out away from the bridge you need to cross, or you could end up smashing straight into traffic when you take your eyes off the road.

Burnout Paradise demands you to learn it. You have to spiral and speed around its roads until they are seared onto your frontal lobe. You have to experiment. You have to fail. Eventually, the tight, expertly-designed map becomes a place you can navigate by muscle memory. 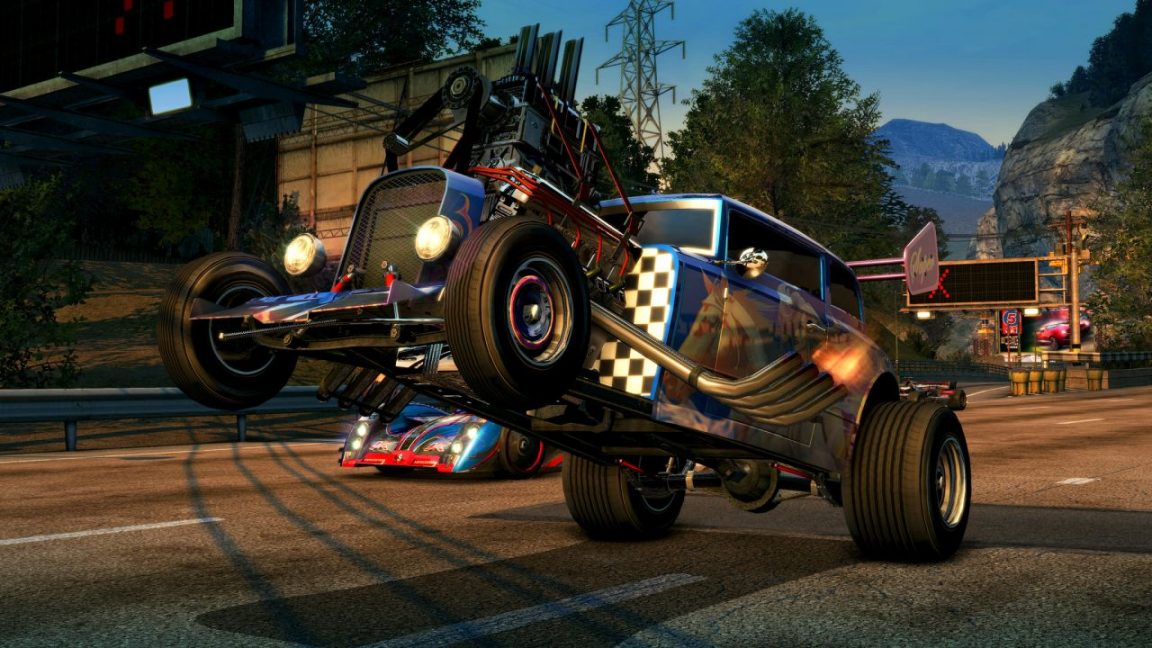 Unfortunately, this design does bring with it some annoyances that attrition can not overcome. For example, if you want to change your car, you have to manually drive to the junkyard and swap it out, then you have to cruise to a repair shop to fix it up. Some events require specific cars, and it detracts from the otherwise breakneck pace to note the race location on your map before driving back to the scrapheap to get a new ride.

Speaking of getting a fresh motor - as a prettied-up version of Criterion’s classic, Burnout Paradise Remastered is underwhelming. Yes, the resolution is higher and it looks sharper as a result, but you won’t mistake this for a current-gen game. There seems to be very little - if any - work done to the textures besides cranking up the resolution and plastering the word ‘Remastered’ on the various billboards you smash through. Following excellent remasters such as Shadow of the Colossus, it is disappointing to see so little work go into the process - especially for a game priced at £30. 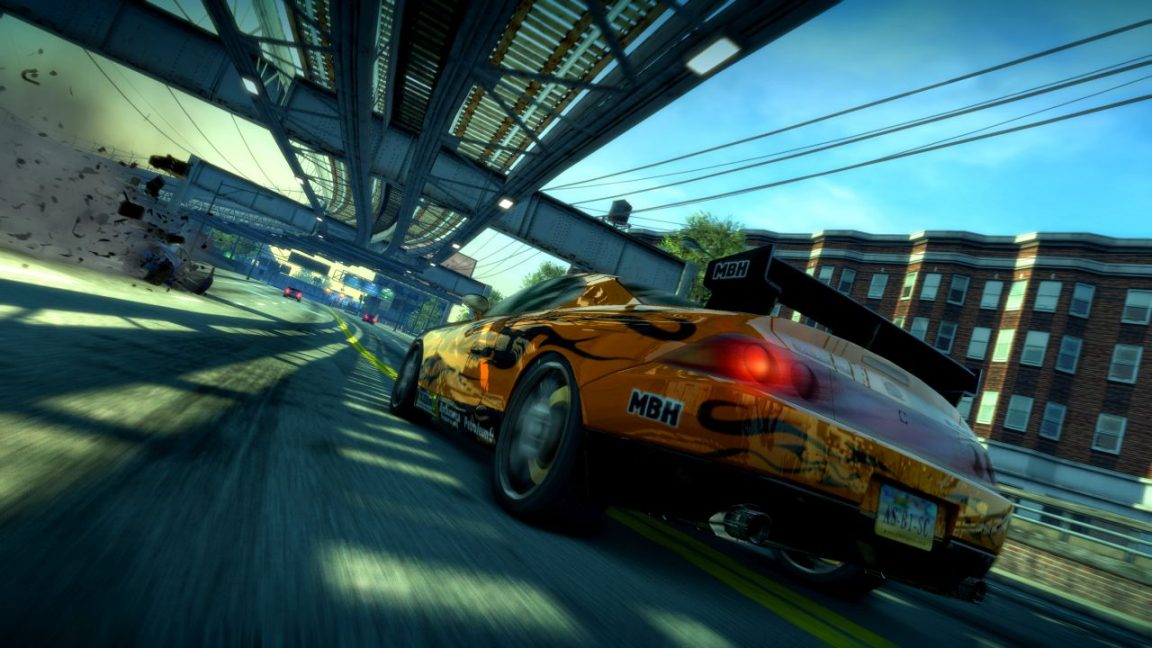 "You have to experiment. You have to fail. Eventually, the tight, expertly-designed map becomes a place you can navigate by muscle memory"

Then there is the fact that Burnout Paradise Remastered comes with all the bonus content released for the original game: you can tear across Paradise City on motorbikes, you can play cops and robbers in multiplayer, you can whiz around the streets in toy cars, and you can explore Big Surf Island in a superpowered dune buggy. There’s a lot to get stuck into, but some of it detracts from the experience.

The fact that you have access to Legendary Cars from the outset strips away any sense of progression. Get behind the wheel of the hovering supercar and you will rarely see the AI opposition in your rearview mirrors.

I had to force myself to use the standard cars because those Legendary Cars made things too easy. But even when you do this, the fact they are in your garage makes it difficult to judge exactly how much power you are supposed to have at any given point - these ridiculous machines set the bar so high. Still, all of this fades into the background when you are gunning down the freeway at impossible speeds, weaving through traffic like a NOS-injected Frogger.

Reviewed on PS4, with code provided from publisher. Burnout Paradise Remastered is released on March 16 for the PlayStation 4 and Xbox One.