Batman Arkham Bundle has been listed by retailer GameStop. The pack includes both Arkham Asylum and Arkham City, as well as all DLC packs.

Here's a small pack-shot. We'll get a bigger one when it's available. 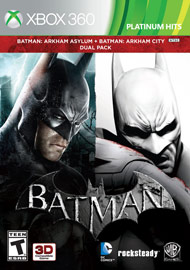 We'll have more on the UK and European release when it is detailed.