If there’s one thing that Ancestors: The Humankind Odyssey has taught me, it’s that I would not survive in the jungle longer than a day and humanity would have died with me. It's difficult to tell if this would be entirely my fault, or the result of a game that goes out of its way to be obtuse.

As this is a survival game, there’s little in the way of hand-holding as you explore your surroundings and expand your territory. There’s a choice of four HUD styles, so you can decide if you’d like tutorials or to go in completely blind. The authentic thing would be to blunder forward, your synapses sparking as you marvel at each new discovery. In reality, you really need to stare at ugly on-screen icons to grasp what's going on. And stab at clunky controls only to discover another twig.

Familiarising yourself with your surroundings by using your intelligence - namely visual focus, olfactory and hearing - is key to your success as you identify food, water sources, tools and, most importantly, predators. The settlement camp where your evolutionary journey begins is a safe haven with multiple resources nearby to get you to grips with Ancestors awkward systems. Sticking near the baby apes - or indeed, carrying two with you - is the quickest way to develop your neurons, which are Ancestors' version of skills.

There are base Neurons which centre around Intelligence, Senses, Communication and Motricity, and each branch off in their own way like a synaptic skill tree. You'll also need to keep babies around to establish a neural link, which fills up over time and allows you to unlock new skills. Ancestors puts the concept of natural selection in your hands as you reinforce which skills you want the next generation to embody, such as having superior communication skills or upright movement. It's survival of the fittest, and you'll need to balance out your skills with your future in mind. It's all fair and well if you can chat amongst your clanmates, but if you can't sniff out food from a hundred yards, you're not going to survive, let alone thrive. 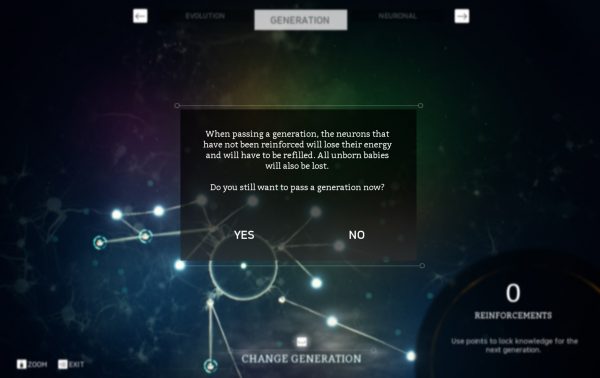 After eating everything I could get my hands on, picking up everything that wasn't nailed down and having a nap, I unlocked some dexterity and communication skills that let me call for help, ask my clanmates to mimic my actions and gave me the ability to switch items between my hands. This lead to the discovery of tool making, and my army of apes soon began to equip themselves with pointy sticks. It's a long-winded process, but not without a feeling of progression even if the rewards often seem slight.

But after leaving the safety of my settlement in an attempt to find another, I was stopping and starting every ten seconds or so to stand up, have a look and sniff around to identify objects and memorise them, only to forget them almost immediately. This laborious system kills the flow of the game, making your slog through the jungle just that; a real slog through the jungle.

There's no ease into combat, either; a black lion jumped out from the bushes and ambushed my clanmates one by one, hampered by a combat response system that feels clumsy and unreliable. Despite upgrading my dexterity and threat response, it still feels like a 50/50 chance whether my ape would stab a predator or dodge straight into its mouth. A way around this is to lead predators into the territory of bigger, scarier predators, which meant I could chow down on some expertly butchered meat with little effort on my part. 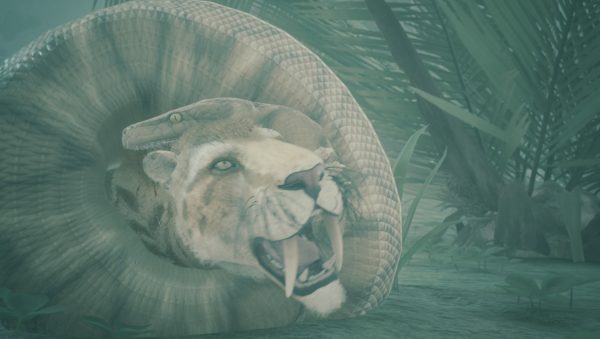 The main problem with Ancestors is that the sluggish controls and systems might well replicate evolution, but they suck the fun out of the repetitive learning very quickly. This rote process of scanning, smelling, memorising, approaching, interacting and eventually forgetting, is only broken up by bad combat, falling from a tree or accidentally killing your clan members. Considering creator Patrice Desilets worked on the original Assassin's Creed and Prince of Persia: The Sands of Time, the tree-swinging controls are a step back to a clumsier age.

Ancestors tries to break up this monotony by having discoverable locations - which you can start your next game from, should you kill off your lineage - and by having your clanmate venture into unknown space. From there, the screen goes dark and shakey, teeth lunge out from the darkness and you have to visualise and smell everything near you to calm down before approaching a ball of light and conquering your fear of the unknown. This is when Ancestors is at its hallucinatory best.

Increasing your territory makes you a more feared apex predator, but it doesn't work if you end up losing all your adults and playing as a baby, where you'll need to hope another adult randomly shows up or be stuck in a hiding spot or settlement forever. Contrary to Ancestors critical mission - evolution - babies don't age. You need to create a settlement, have one adult and one baby present and skip a generation by 15 years. 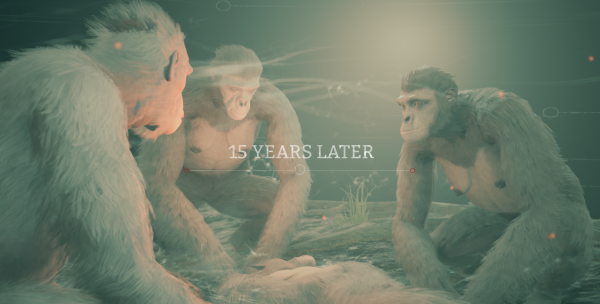 Ancestors should take around 30 to 40 hours to complete, but the stop-start nature of the frustrating gameplay will make that feel a lot longer. Survival game enthusiasts may warm to the challenge Ancestors presents, but once you're past the first few hours, dragging a broken leg behind you feels like hard work more than anything else.

Ancestors feels wilfully stubborn. Even after developing my memory neurons, form recognition and sense of smell, my avatar was still forgetting what a dead branch looked like every 50 feet, or the sound of a hissing snake. It doesn't really feel like it's about evolution at all, as each generation only remembers the skills you've reinforced and will forget the rest, which means you need to repeat the same actions for millions of in-game years. There is a direction of sorts - expand and evolve - but the lack of colour, repetitive noises and actions all blend into one. It's initially interesting, but its bundle of ideas and systems stumble between clever and stupid, intuitive and clunky. Ancestors: The Humankind Odyssey needs more time to evolve.

Ancestors: The Humankind Odyssey is out August 27 exclusively on the Epic Game Store and comes to consoles this December.