If you’ve ever taken on Alduin in Skyrim, you’ll know that it’s important to go in equipped with a variety of Shouts, spells, and powerful weapons – but what if, somehow, you had a fighter jet instead?


While Alduin ends up being no match for the Dragonborn during their iconic clash in the fields of Sovngarde, the fight likely would have gone a lot smoother for the latter if they had access to a special Dovahkiin warplane. So, as a means of testing this hypothesis, some mad lad went and modded Skyrim’s Alduin into Digital Combat Simulator.

Check out the Reddit post below, which includes footage of the whole fight. I can’t stop laughing at the fact Alduin’s wings are actually smoking as he spirals towards the ocean. Alduin’s wings have jet engines – it’s canon now.

He also explodes when he hits the ground, as if dragons are hard-wired with flammable machinery, as opposed to literally having fire in their throats at all times.

Screw spells, blades and all that nonsense. THIS is how you properly slay a dragon. (Yup, that’s Alduin’s model ported into DCS) from flightsim

“Screw spells, blades and all that nonsense,” reads the description. “THIS is how you properly slay a dragon (Yup, that’s Alduin’s model ported into DCS).”

From the very first second, it’s utterly ridiculous and completely brilliant. Seeing Alduin hovering over telephone wires is absurd. And yet, it sort of works. 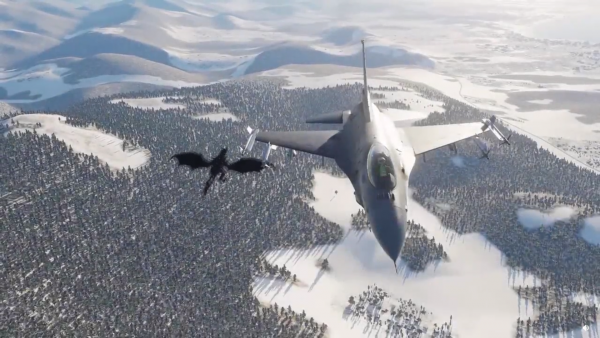 In related news, giants won’t stop flying around on dragons in Skyrim. I think the next thing we should get in Digital Combat Simulator is a dragon airplane piloted by a Skyrim giant. Now that would be a challenge.

Also, you know the Dragon language that Alduin speaks? As it turns out, somebody recently submitted all of their school essays in Dovah.