Have you not gotten on your horse and ridden into the sunset yet? If you’ve been waiting on a deal for Rockstar’s Red Dead Redemption 2, Amazon has you covered, if you have an Xbox One.

Amazon is currently having a sale on digital Xbox One games, and there are some huge names on that list that you can get for cheap, provided that you don’t mind forgoing a physical copy of the game. Amazon is doing this to price-match the Microsoft Store’s sale on Xbox One games. The difference? The Microsoft Store requires you to be an Xbox Live Gold member to take advantage of the deals.

One of the standout deals is definitely Red Dead Redemption 2 for $29.99. Rockstar’s cowboy and horse riding simulator released about a year ago for consoles, and there weren’t many sales on the title between then and now. Rockstar games just don’t go on sale too often, so if you’ve been waiting on a deal, now’s your chance! It’s important to note, though, that this deal is only for the digital version of the game on Xbox One. If you’re looking for a physical or PS4 copy, you’ll have to wait and see if they go on sale! 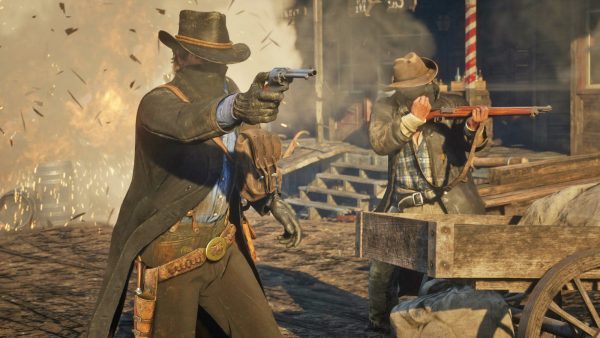 Of course, Red Dead Redemption 2 isn’t the only great game you can grab an Xbox One code for at a discount. Grand Theft Auto V for $15.00 is a great deal as it also doesn’t dip in price a lot. If horror games are more your speed, Resident Evil 2 for $19.80 gets you the fantastic remake at a great price. Finally, you can grab Far Cry: New Dawn for $19.99.

Don’t have an Xbox One? Now is also a great time to grab one! The best part about these digital sales is that you can buy the Xbox One S 1TB All-Digital Edition Console for $149.99 at Best Buy and play them all right away. Red Dead Redemption 2 and a machine to play it on for under $200 is a pretty good deal!