Iron Man and company are caught bang smack in the middle of a hellstorm as the bridge they’re confined to begins to fracture and crumble. The ingenious attack was engineered by none other than the nefarious Taskmaster, a criminal mastermind seeking to expunge The Avengers once and for all. And as the ocean begins to swallow chunks of the concrete megastructure whole, it becomes alarmingly clear that, sometimes, even heroes have to lose.

When I sat down to play Marvel’s Avengers at Gamescom 2019, I wasn’t expecting much. Despite the universal success of Rocksteady’s Arkham series and the wonderfully intuitive webslinging boasted by Insomniac’s Spider-Man, there’s something that always makes me view superhero games through a lens of scepticism. Perhaps they’ll be a banal reiteration of a tired story, or little more than anathema capitalising on a namesake that will inevitably bolster profits without having to actually earn them. Fortunately, the upcoming Avengers game plays spectacularly, and there’s a clear reason for that: combat.

From chucking cars as Hulk to unleashing barrages of belligerence with Iron Man’s rocket launcher hands, every Avenger’s combat build has a distinct feel to it. The heroes that stuck out most during my time with the game were Thor and Captain America, primarily because of how good it felt to throw their big, heavy weapons. The feeling was so intuitive and refined that I began to wonder whether or not the mastermind behind God of War’s Leviathan Axe, Vince Napoli, had consulted on their design, at least in some capacity. As it turns out, Napoli is Marvel’s Avengers’ lead combat designer.

Napoli says he was fortunate because his first game development gig allowed him to work across various departments on an MMO. However, it wasn’t long before he realised that combat design was his true passion, and he quickly began using his personal interest in combat systems as a player to inform his work in game development. 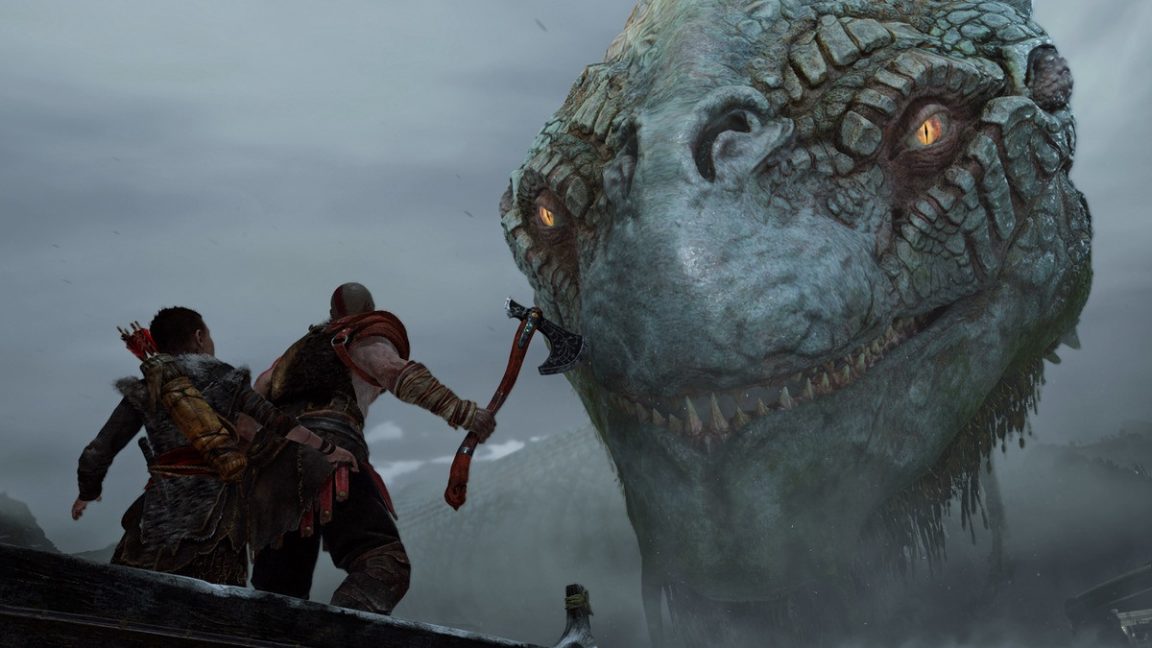 According to Napoli, the craziest thing about the Leviathan Axe in particular was that it legitimately took years to design and properly implement. “There wasn’t a single moment of the project where tweaks, improvements and little bits of iterations were not taking place,” he explains.

“The ‘axe stick,’ for example, was probably the first idea I had as a way to attempt a unique feel to the weapon,” Napoli says. “It would take a few years and dozens of iterations to settle on the exact timing and feel.” Kratos’ iconic axe actually became such a controversial subject in the studio that a contingent of the combat team began to despise it. This group maintained that it ruined the flow of combat, stunting the fast pace of a God of War game with a sluggish feel. But whenever he tried to take the axe out, the game felt wrong. “It took dozens of minor speed reductions, timing tweaks, posing adjustments, and putting it in front of the combat team until eventually it clicked,” he says.

For Napoli, one of the most exciting things about the Leviathan Axe was tied to the potential imbued in a ranged weapon that could be recalled at any time and seamlessly weaved into a subsequent attack, smoothly allowing for transitions between ranged and close combat and yielding a dynamic way of performing combos. That vision was ultimately why the axe never got cut, and although it was a divisive topic in the studio for years, Napoli eventually managed to resurrect the style he wanted and implement it while tailoring some final touches. “I feel it’s that kind of iteration that is required to get to final quality,” he says. “It all comes down to having the time, talent, and resources. When you’re surrounded by a group of people who all have the same drive for quality, the results show.” 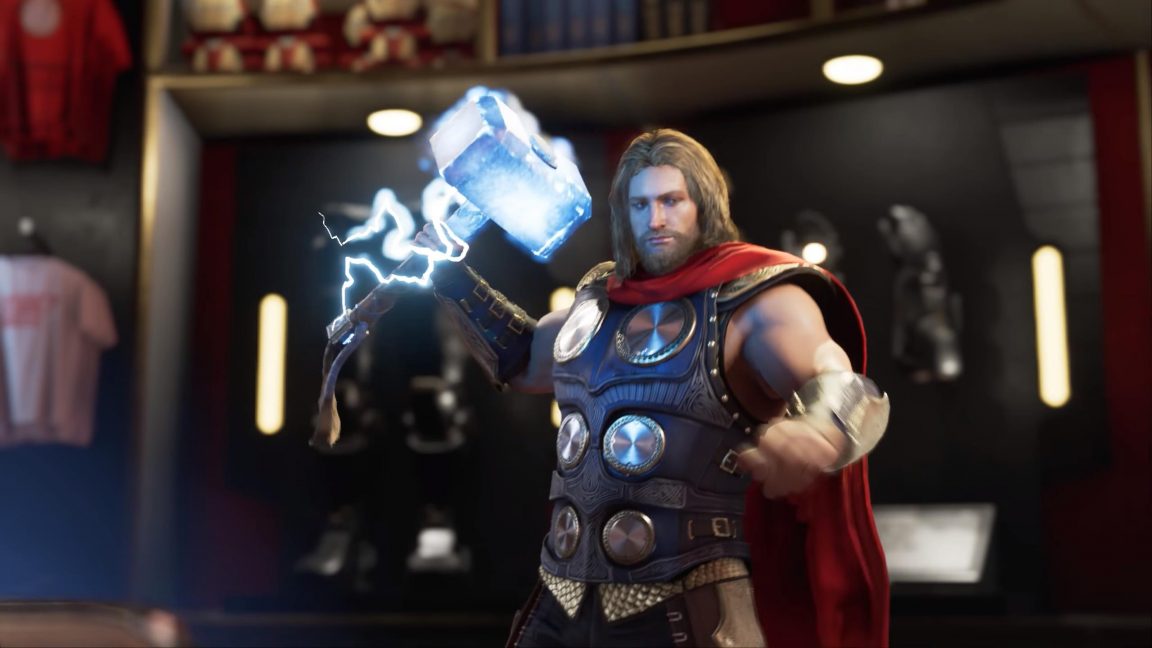 However, despite the ostensible – or perhaps apparent is a better word – similarities between the Leviathan Axe and Mjolnir and Cap’s shield, the latter pair are radically different to Napoli’s previous throwymajig. “Aside from both being weapons that are thrown, I wouldn’t actually say there’s a lot in common,” he explains. “For example, thanks to over 80 years of Marvel comic books, the shield basically has an identity of its own at this point. Take for example something as seemingly simple as what it should look like when Captain America throws his shield: in the films and comics, there are actually a bunch of iconic looks and poses he uses to let his shield fly.”

Instead of just randomising the look of shield throw, which would homogenise the timing and, in Napoli’s words, “betray the weight and feel,” the team opted to implement a ranged system that was utterly unique to Captain America’s build. “When used in rapid succession, each of the throws changes not just the look of the toss, but the timing, arc, impact, damage and the reaction they inflict,” Napoli explains. “Since the shield comes back quicker when it impacts a target – ricocheting off of them – there’s a lot of nuance to using Cap’s shield properly at any given range.”

The same passion was poured into each of the other playable heroes, too, of which there are four: Thor, Hulk, Iron Man, and Black Widow. Each of these heroes were designed with their comic book appearances in mind as opposed to any references to protagonists from other games, Napoli says.

“I would say Widow’s inspiration is mostly based around realising the idea of Marvel’s Black Widow as a speedy rogue-like assassin,” he says Napoli. “All of her attacks and abilities are designed around the concept of setting up enemies by putting them into exploitable states, which she can then use other abilities to take advantage of.”

It was also important to the team that Widow’s illustrious gadgets constituted a prominent part of her overall build. According to Napoli, a lot of people working on Avengers claim that Widow is their favourite character. “I chalk it up to the fact that we get to play with her speed and finesse from an attack animation and ability standpoint and at the same time mix it with advanced tech and gadgets,” Napoli says. “The result is that she feels incredibly versatile, being able to deal with all sorts of combat scenarios and amazing critical strike moves.” 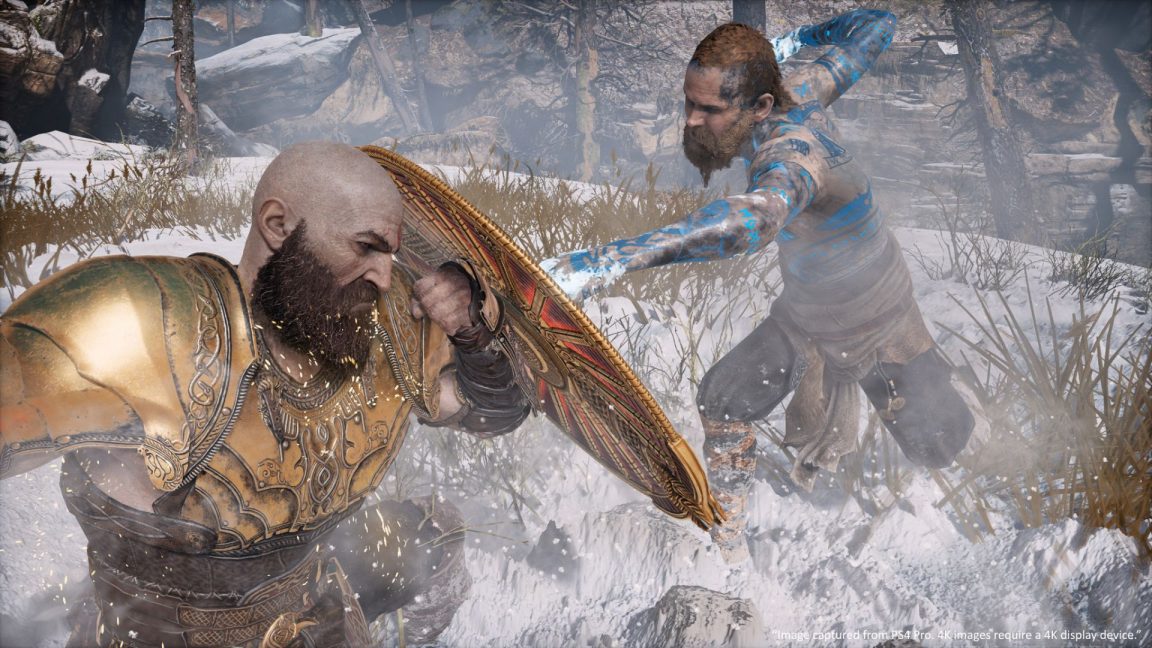 Hulk and Iron Man also had their own unique inspirations and iterations, requiring “totally different philosophies,” Napoli says. “With Hulk, it was really all about the team making a list of ‘must haves’ from a fantasy fulfilment standpoint,” he explains. “He has to pick up guys and then smash them into the ground. Hulk’s Rage mode became a great way for us to deliver on the fantasy of a non-blocking, yet still defensive mechanic-utilising Hulk who is able to plough through enemies in an uninterruptible fashion without breaking the mechanics of combat or being overbalanced compared to other heroes.”

Although these three modes map out a clear way of separating Iron Man’s various styles, there’s touches of nuance within each, adding flesh to a sturdy skeleton. “For example, lasers – while used in flight – employ a unique auto-target locking behaviour which lets you fire in a no-look sort of fashion as you’re doing fly-bys,” Napoli explains. “It’s really effective as a defensive ranged weapon because it quickly locks onto enemy projectiles and shoots them out of the air. Rockets on the other hand, when used in flight, require a bit of preparation, as you need some time to lock onto up to five different targets before you can effectively carpet bomb the combat space.”

For Napoli, working with heroes “as well known and iconic as Marvel’s Avengers” offers designers a massively unique opportunity. “While there might be some simplification that can be done by deeming Hulk a tank, or Iron Man ranged combat, the characters’ abilities and combat styles are already so pronounced and nuanced that they simply don’t fit into any predefined gameplay-box,” he explains. “Each time we build one, we essentially have to remake the box.” 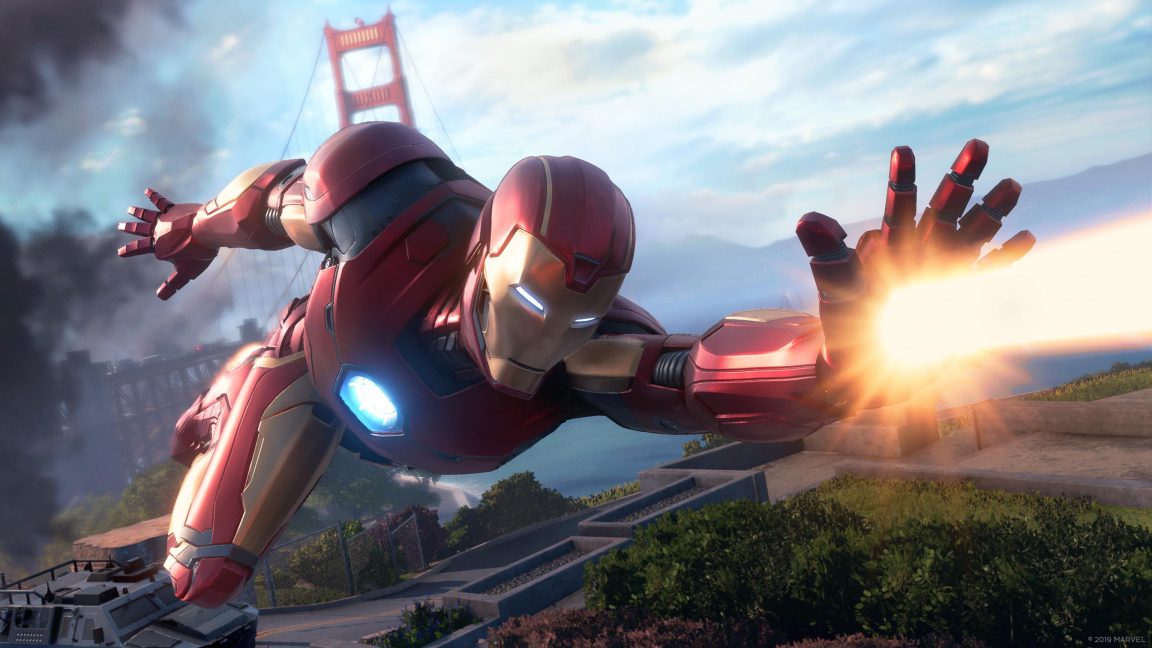 As for Napoli himself, his favourite character is Iron Man. “It’s probably not a fair decision because Iron Man has been in my top three favourite heroes since I started reading comics in middle school,” he tells me. “I was actually so jealous back when the first Iron Man game came out, because the idea of working on an Iron Man game would have been a dream come true. And, not to sound too cheesy, but if I’m being completely honest: getting to work on these iconic characters as a huge, life-long comic fan really is a dream job. When I read some of the online comments discussing the characters’ designs being realised and I see how excited everyone is for what characters might get built next. I’m really just as excited as they are to get to build them.”

From Kratos’ Leviathan Axe to Thor’s Mjolnir, Vince Napoli has been the brains behind some of the most iconic video game weapons of the last decade. Considering that the Avengers game will be continuously adding playable heroes to its roster as DLC, it’s likely that we’ll see several other illustrious comic book heroes and their respective weapons of choice realised sooner rather than later. And if there’s someone out there who knows how to design combat with a proper feel to it, it’s Kratos’ codesmith.