The next set of updates and new features are coming to Red Dead Online later this month.

Rockstar Games has announced an update will be released for the Red Dead Online beta at the end of February.

Updates will include Posse-wide Parleys, a Law and Bounty system, weapon balancing, changes to player blips on the mini-map and more.

The update will also “minimize certain types of destructive player behavior,” thanks to changes made to player blips on the map.

Red Dead Online players will find visibility of blips reduced over long distances, and your map position won’t display to other players unless you are within 150 meters. If you are slightly further away, you will only appear when firing your weapon.

Players in other towns or regions won’t be visible, as it will prevent players from being repeatedly targeted across the map at long distances.

A new system which highlights overly aggressive players will be added. If you become rather hostile, your map position as well as the position of your Posse members will become more visible. Your dot will also progressively darken by incrementally shifting from blue to dark red.

Your visibility will increase when you perform “bad deeds” such as attacking and killing players on their horse outside of a structured mode, Free Roam Mission, event or competition. The shorter the time between bad acts, the more your visibility increases. Visibility will fade over time if you start behaving a bit better.

Improvements are being made to Feuds and Posse-wide Parleys are being introduced.

Posse-wide Parleys will allow you to initiate Parley that applies to your attacker’s entire Posse after a single kill. If you would rather challenge an opponent, just initiate a Feud, Posse Feud or Leader Feud after one kill. This will “quickly turn a dispute” into a timed mini-deathmatch in Free Roam, earning points for each kill on the opposing player.

Another update will find players with high bounties being chased down by NPC Bounty Hunters. With this update to the Bounty Hunters system, your criminal behavior will have bounty values and honor consequences.

This will scale based on the severity of the crime. Killing another player will resort in a higher bounty, and if you slap around someone who lives in town or are an asshole to animals, the bounty won’t be as high. They should make the latter a bit higher, but we’re not a game developer.

Should you loot or ransack a place, or commit a lower level crime, it will only decrease your honor.

If your bounty exceeds a certain amount, the bounty will switch to “wanted dead”, and you will be and alerted to Bounty Hunters on pursuit. The higher your bounty, the greater your value and the more difficult the pursuit becomes for you and your Posse.

If your bounty exceeds a certain threshold and Bounty Hunters are made aware of it, you will be “wanted dead” and alerted to their pursuit. The higher your bounty, the greater your value and the more difficult the pursuit becomes for you and your Posse. 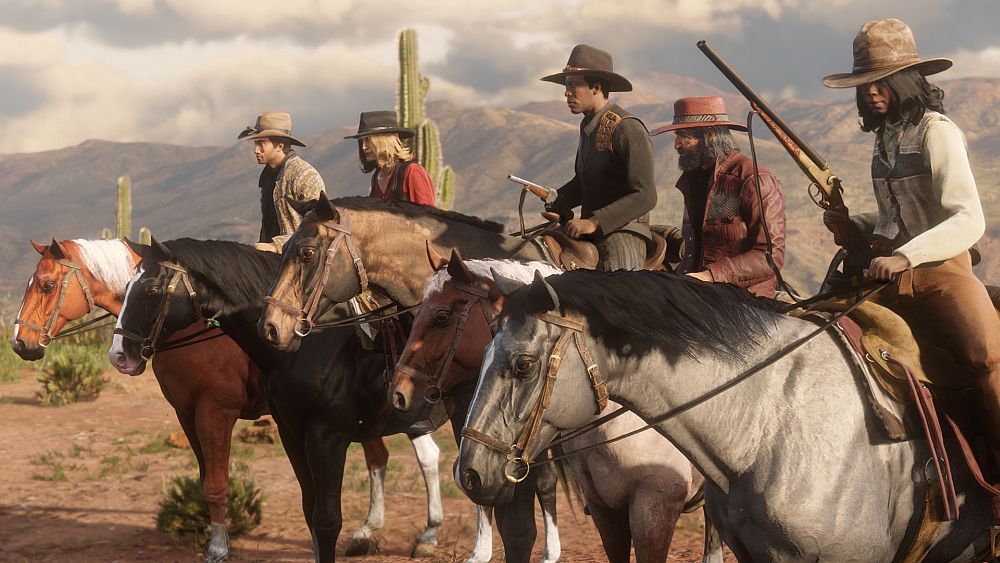 Rockstar will also add a variety of Daily Challenges to Red Dead Online. Completing these objectives will earn you Gold Nuggets and XP. Challenges will range from foraging for herbs, fencing items, hunting and skinning animals, clearing hideouts, winning Feuds, and more.

These Daily Challenges will continue to expand and evolve over time with a variety of bonuses.

Several additional changes based on community feedback are being made, according to the studio. This includes re-balancing select weapons such as the Varmint Rifle, and voice chat will be reduced to work at closer proximity.

Fixes to horse cargo “are numerous and ongoing,” and the studio plans to introduce improvements to making pelts and carcasses more persistent after death or respawning.

More details on the February 26 update will be provided next week.

In the meantime, you can earn double XP this week in Free Roam Missions and Free Roam Events by joining a Posse. Plus,  next week you can earn 20% more XP across all activities in the beta.

If you’re just getting started, our Red Dead Online guide has plenty of tips and tricks for missions, multiplayer modes and open world survival. You can also get at look at creating a character in the video posted above.