The first Doctor Who skin pack for Minecraft: Xbox 360 Edition has finally arrived, and it is filled with Doctor goodness.

The first skin pack contains just some of the characters from the series’ 50-year history.

Each skin pack will offer six Doctors along with various other characters and enemies. 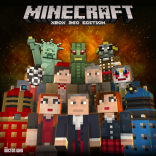