Classic Warcraft 3 is back as Warcraft 3: Reforged, an exceptionally shiny new version of the sheep-exploding strategy classic. As well as including remastered versions of some of the best RTS campaigns ever made, it also comes with a polished version of Warcraft 3’s classic multiplayer.

Unfortunately for any hopeful commanders reading, the original is old enough to drink, so there’s a fair chance your opponent is going to use the dirty, unforgivable tactic of having played the game before. Will these tips turn you into a stone-cold pro, forever deafened by the roars from arenas packed with adoring fans? Absolutely not. Please. Stop asking. They should, however, give you a solid jumping off point on your road to becoming extremely crafty in the art of war.

Also, this one’s for beginners! I’m sure you’re great at Warcraft 3, mate. Honestly. Just the best, but this guide is aimed at helping new players get acquainted with the basics. If you’ve got any hot tips of your own, feel free to leave them in the comments.

If you need some assistance with the campaign, we have all the Warcraft 3 cheats here.

Broadly, there are three types of units in Warcraft 3. Units and Heroes are for combat, Workers are for gathering resources and constructing buildings. The two resources you’ll be sending your workers to collect are gold, gathered from gold mines, and lumber, collected from trees.

Getting the most out of your workers is key to funding a successful game, and that means gathering gold and lumber as efficiently as possible. Each faction starts with five workers. Right off the bat, you’ll want three on gold, one on lumber, and one for building. You’ll want to increase that number to the maximum of five per gold mine as soon as possible, and at least four on lumber.

There are some differences between the factions you’ll want to be aware of, too. Orcs and Humans are functionally the same, with workers manually chopping down trees and disappearing into gold mines to collect gold, then walking the resources back to your Hall building. As such, you’ll want Halls as close to gold mines as possible. If, for any reason, you have to build one further than the minimum distance, you’ll want more than the five workers to make up for the lost time.

Night Elf workers, called Wisps, need to Entangle a Gold Mine to gather from it, which takes 60 seconds. Once built, Wisps can be ‘loaded’ into the mine, gathering gold without having to move. Being the environmental sort, they also don’t destroy trees while gathering lumber, like the other factions. Pop a wisp on a tree, and it’ll float around gathering lumber for the rest of the game.

The Undead also have a special gold structure - a Haunted Gold Mine. Like Night Elf Wisps, Undead Acolytes stay on the mine and gather automatically. At 100 seconds, building one is slower than the Entangled Gold Mine, but Undead Acolytes don’t need to stick around in one spot to build, instead summoning a portal that brings their structures into existence. Once the portal is summoned, they’re free to start other tasks.

Undead also differ from the other factions in that they need to use their most basic combat unit - Ghouls - to gather lumber. The trade-off is that Ghouls gather 20 lumber per delivery instead of the Human and Orc’s 10, and the Night Elves’ 5. They’re also much more defensible, should your opponent target your workers.

All games begin with your starting town right next to a gold mine. Night Elf or Undead players will find their starting mine ready to use, won’t have to worry about Haunting or Entangling right away, until... 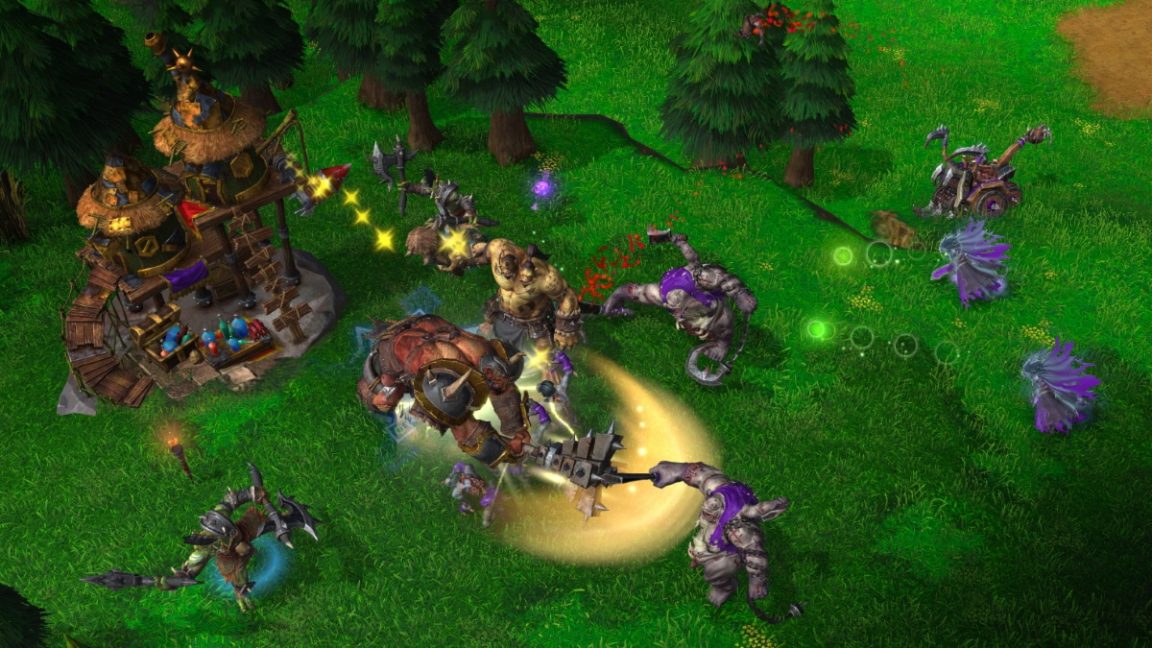 ...the first Gold Mine collapses. That’s right, Gold Mines don’t last forever, so you’ll be looking to expand quickly into the early mid-game. Locate a second gold mine early, and start planning to clear the area and expand to a second base. You also want to keep an eye for your opponent’s expansions. If you’ve got two gold mines, and they’ve only got one, you’re going to be at a serious advantage.

To find out where your opponents are expanding too, though, you’ll need to spend some time on recon. Sending a starting worker out to explore the map is a common tactic, but make sure you replace them quickly to avoid losing out on precious early game resources. For later on, all factions have access to flying or invisible units which make for great scouts. Finding out early what sort of force your opponents are building allows to build an effective counter force. Check the section on ‘Creeping’ below to find out more about neutral buildings, and some of the great scouts you can hire there. 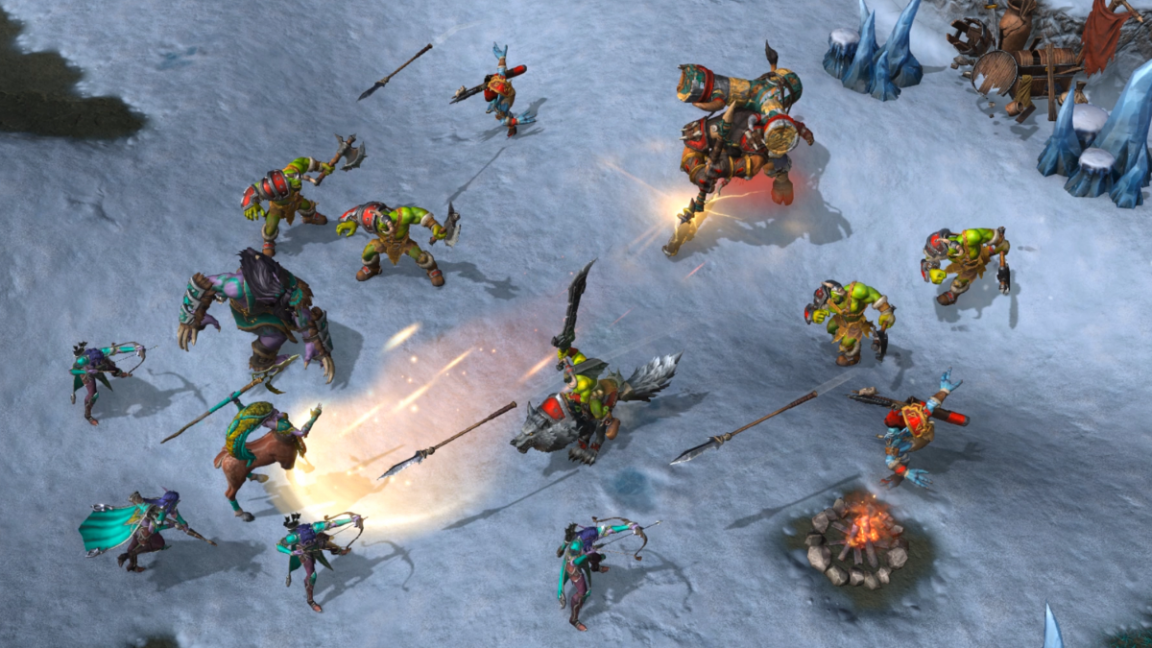 Play through the campaign at least once first

As tempting as it is to jump straight into competitive and custom games, one of the reasons Warcraft 3 and The Frozen Throne expansion are remembered so fondly is the gripping story campaigns they offered. If you’re a World of Warcraft fan, these story missions are your chance to play through the first appearance of iconic characters like Arthas, Thrall, and Sylvanas Windrunner. Even if you’re not, it’s a great opportunity to get acquainted with the strengths and strategies of each faction, and to introduce yourself to hero abilities and units at manageable pace. Many campaign missions rely on utilising the tactical strengths of freshly introduced units, so make for a great chance to really get to know each tool at your disposal, and decide which faction is the best. It is Orcs, by the way. 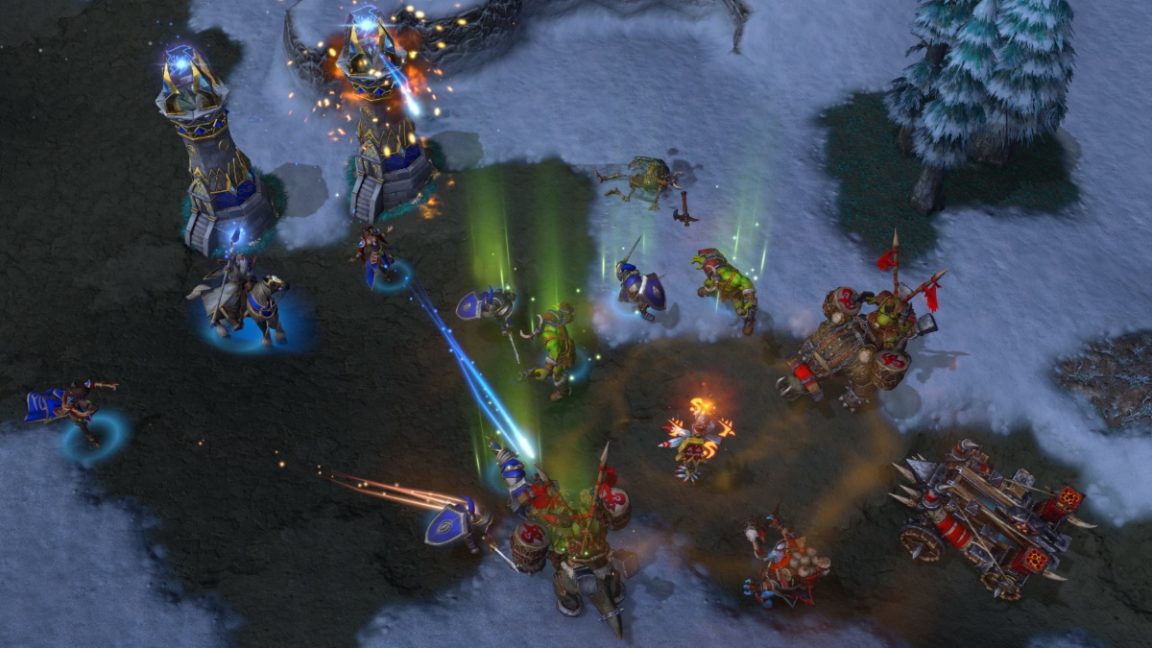 Warcraft 3 played a huge part in the evolution of the MOBA, changing the competitive gaming landscape forever, and also signing its own genre’s death warrant in the process. Oops. Nowhere is this more apparent than how key smart hero use is to succeeding in competitive play. Though learning things like build order, resource management, and unit production is important, nailing how to micromanage your hero abilities will end up being the deciding factor in combat.

The first hero you summon in a match is always free, and so constructing your faction’s hero building should always be a top priority. Each hero starts with one skill point, which you’ll want to spend on an ability immediately. More advanced players might choose different heroes for different plays, but the best hero and starting hero ability for each faction is generally considered to be as follows:

Although heroes can be revived once killed, the process is slow, expensive, and can leave you at a serious disadvantage. If you’re losing a fight, there’s no shame in getting your hero out of the fray to recover. Each hero starts with a Town Portal Scroll. Use it if you need it! In general, Warcraft 3 is about push and pull, not about putting everything behind a single, do-or-die attack plan.

The other key to getting the most out of your hero is making sure they’re always getting some experience points, which brings us on to... 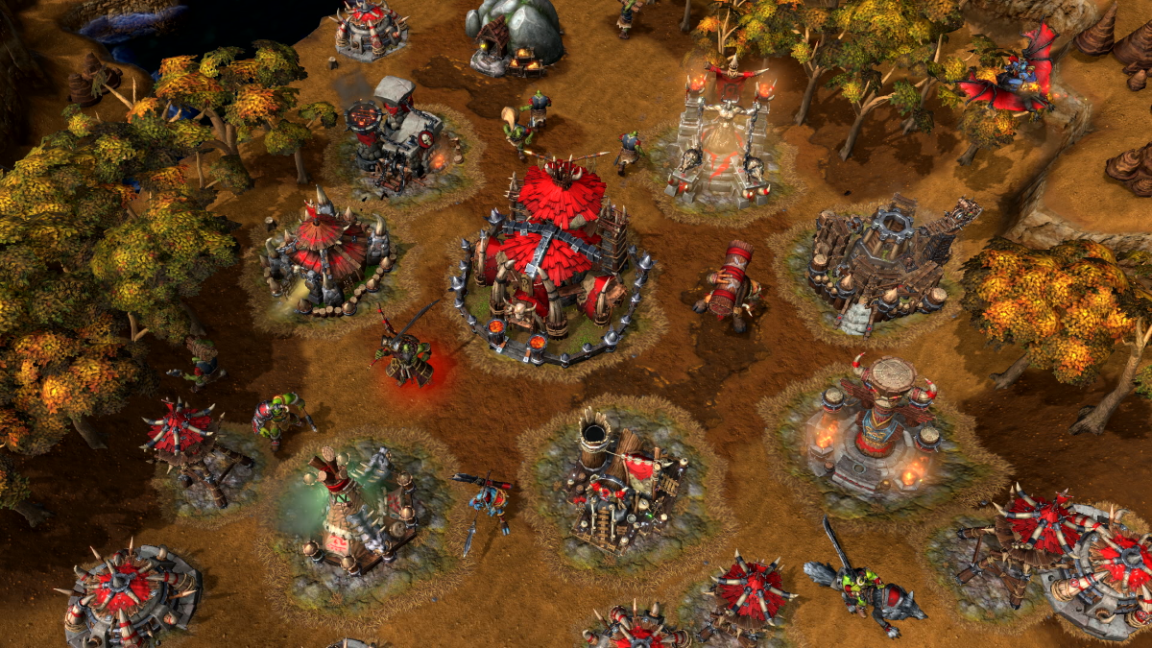 Creeps are the hostile NPC creatures dotted around competitive maps. Creeping refers to the act of exploring the map and attacking the Creeps, usually with your hero and a few supporting units, to gain gold, hero items, and experience. Although your hero gains more experience for fighting your opponents, killing creeps is a great way to build them up while you’re still putting together a force.

As resources and anything that gives your hero a bonus are so important in the early game, players who don’t creep are at a huge disadvantage. Competitive Warcraft 3 is a game of two halves, in this sense. There’s the more traditional RTS base and army building, then there’s the dungeon crawl/RPG aspect of fighting and levelling up your hero, and getting some extra resources to help with the base. Nailing this multitasking is one of the game’s most challenging aspects, but it’s also why competitive Warcraft 3 is so unique.

If your hero is not involved in combat with another player, they should always be creeping. Keep in mind, though, that once a hero reaches level five, they will no longer gain experience from fighting creeps.

You’ll also find neutral buildings dotted around maps. The Goblin Laboratory, for example, can sell a Goblin Shredder, which is great for collecting huge amounts of lumber in a short time. They also sell Goblin Zeppelins, which make fantastic scouts for recon. These neutral buildings are often guarded by creeps. If you happen to need something from a neutral building, but the levels of the creeps surrounding it are too high, try waiting for nightfall. Creeps sleep at night, so you can rush in and rush out with no risk! 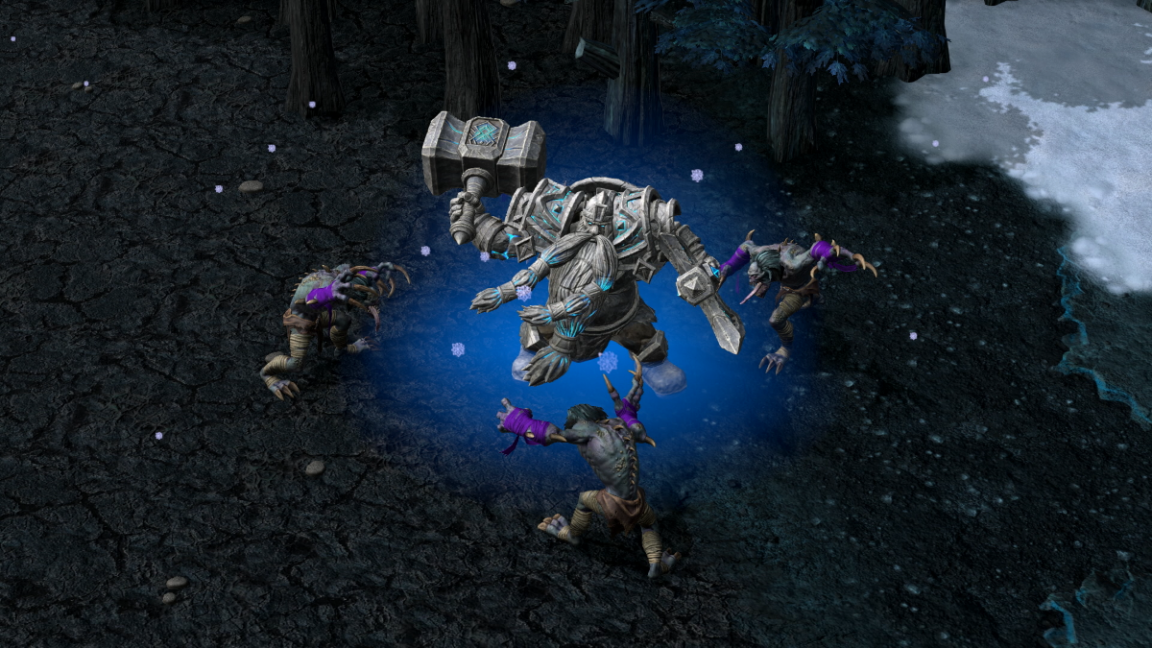 A simple but important one, here. Always be doing something. Whether it’s building, fighting, creeping, or upgrading. Don’t hoard resources. Don’t stay still. Keep clicking. Why aren’t you clicking?

The early game in any match is all about speed and efficiency, as well as fielding the most effective units possible, as soon as possible. With different buildings dedicated to resources, tech trees, units, and defence, it’s worth having a build order in mind so you don’t get overwhelmed.

As with heroes, it’s difficult to give a definitive answer to what you should prioritise in your build order, since there’s so many factors that could play into your overall strategy. That said, when you’re first starting out, there are some generally agreed upon sequences which are worth learning, if only to use them as a template for your own. Nailing the nuances of competitive Warcraft 3 has been a years long iterative process. You’ll likely learn something new every time you play, watch, or read about a match. That said, these eleven year old forum posts for Humans, Orcs, Night Elf, and Undead are a fantastic place to start.

As a final bonus tip, make sure you spend at least two minutes repeatedly clicking on each new unit until they get annoyed with you and start spouting hilarious dialogue. This is widely considered to be the most important part of Warcraft, and it’d be a crime to miss out. Happy zugging!