Nintendo doesn't do simple, straightforward sequels all that often, but this time it has.

Nintendo is usually all about reinventing the wheel, or making major changes to its franchises. Super Mario 64 led to Sunshine, to Galaxy - and it was only with Galaxy's sequel we got a more typical iterative sequel. Zelda has a formula, but the way that series is carried also lends to vast differences from entry to entry. Things like Mario Kart tend to be more iterative, but even then these sequels are released quite a way apart. For Nintendo, sequels either come very slowly or are very different, or both. Splatoon 2 is not that. It's Nintendo at its most iterative - but that's okay. Splatoon's foundation is strong.

Without a doubt the best new thing from the Wii U and arguably Nintendo's best new franchise in a decade or more, Splatoon is Nintendo's take on shooters - but colorful, family-friendly and fun. That's honestly all you really need to know: Splatoon is a shooter done the Nintendo way, and it's brave, different and brilliant. Splatoon doesn't have the life-or-death feeling of a Counter-Strike or the death-and-respawn meat grinder feeling of Call of Duty, but instead feels more collaborative with its nippy team-based modes. The closest comparison is probably Overwatch, I suppose, but in third person and with paintball. 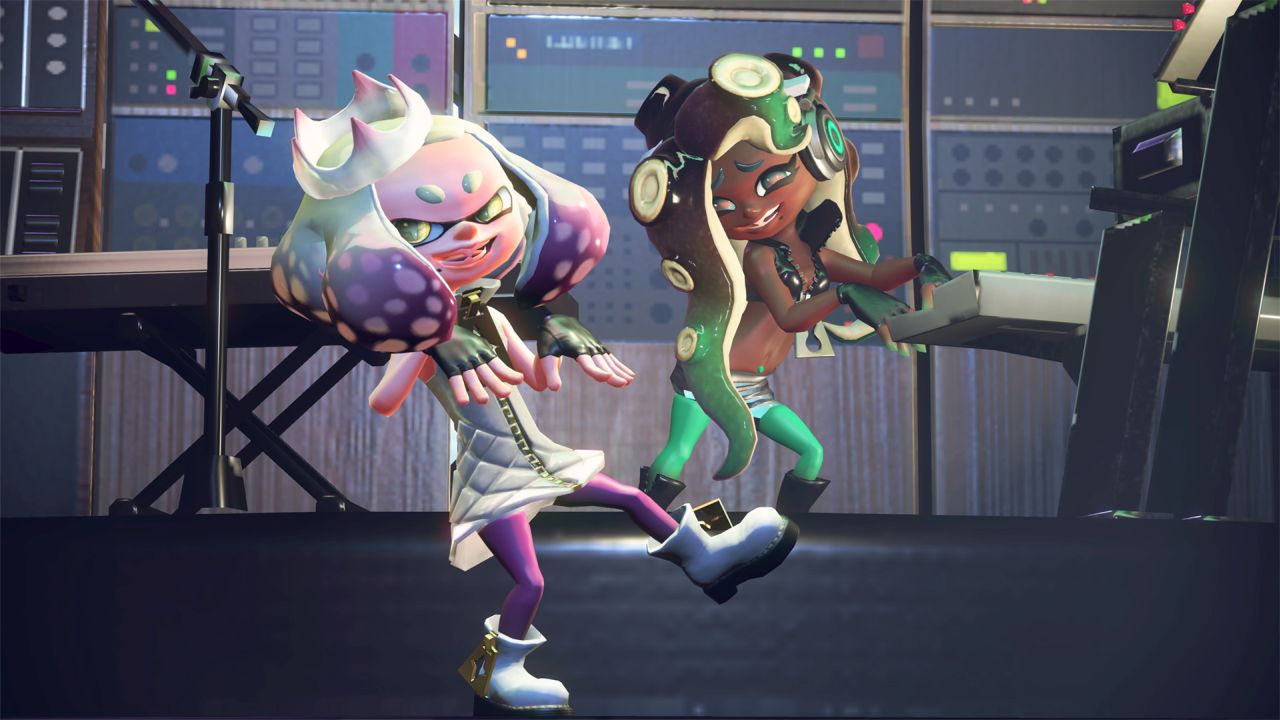 For those of you who missed the Wii U and are thus unfamiliar, the thing that really sets Splatoon apart mechanically is the design of Turf War, its main competitive mode. Turf War isn't about kills and deaths or capturing specific points, but instead is about control of the map in general. Your paint-based weapons don't just defeat enemies but also ink the map, and so you're really only killing in order to gain the ability to spread your team's paint across more of the map or cover up the enemy's paint.

Given that ink also determines move speed, reloads and your general traversal ability, everything hinges on this, and a team that's good at spreading their ink across the map will be able to rapidly outflank and outplay the opposing team.

"The additions and tweaks are smart and welcome, making this an even better execution of a brilliant idea."

The game only ever feeds you a couple of maps at any given time, and goes to great pains to encourage you to learn each battlefield's ins and outs so you can ink them up effectively. There's a simplicity to the concept of these matches, but lurking behind it all is a deceptive, compelling level of depth that becomes difficult to peel yourself away from.

The game honestly felt like it marked a major moment for Nintendo thanks to its shift from the well-known creators of old to new blood bristling with bold and different ideas. That's how we get here - to a shooter, one of the few genres not remotely associated with Nintendo, and to one that has a new and charismatic cast of characters rather than the same old faces. It's no surprise that a sequel wouldn't quite feel as original, of course, but Splatoon 2 is still filled with the youthful, eager vigor that made the original game so special.

So, yes - the basic stuff that made the original great mechanically and beyond is still all intact here in Splatoon 2. Turf War is of course playable both handheld and docked, and Splatoon 2 looks quite a bit sharper than its predecessor while running at a rock solid 60fps.

Splatoon made decent use of the Wii U's second screen for an interactive map, but this feature honestly isn't missed in the sequel. Handheld play is admittedly made a little more strange due to how this series really encourages you to use gyroscope aiming for fine adjustment, and that doesn't work so well in handheld, at least for me. 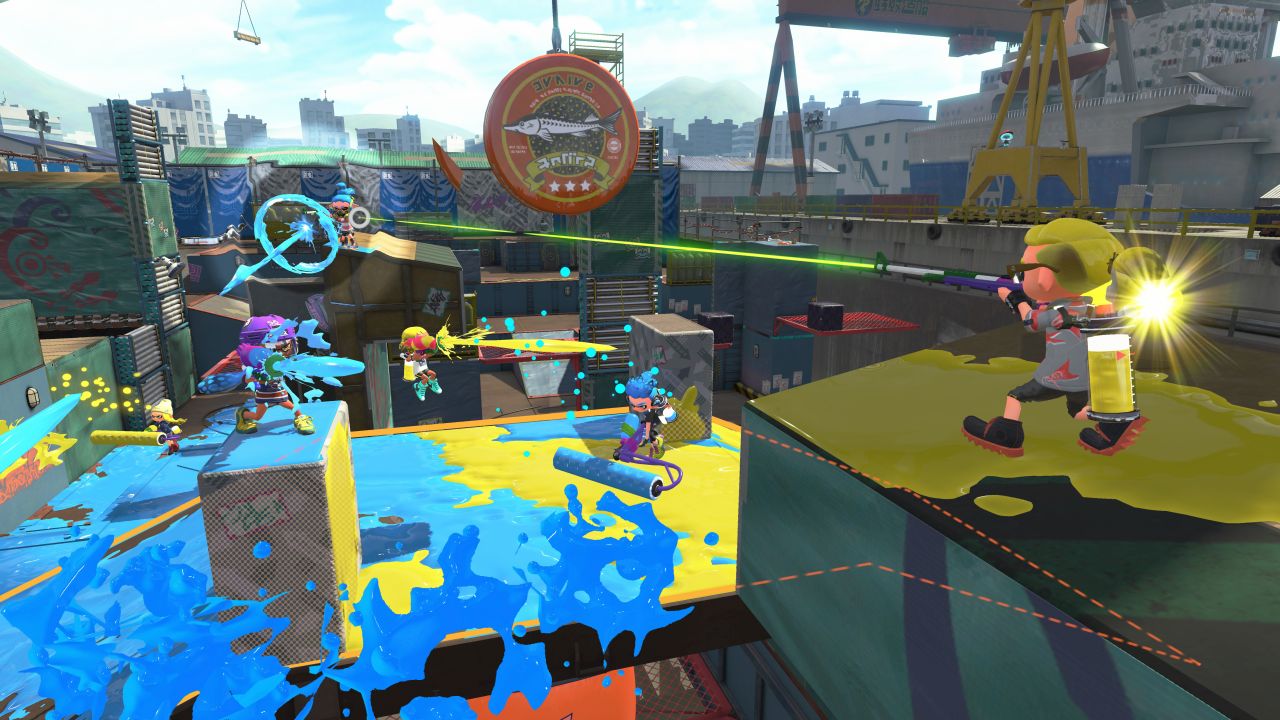 "Salmon Run honestly might be my new favourite Splatoon mode, a hectic and exhilarating experience that'll have you screaming at your team mates."

I spent most of my time playing in docked mode with a Pro Controller, however - and that's a blast thanks to the shooter-friendly layout and the gyro functionality all being there. The gyro is something that might put some of you off on paper, but once you embrace it, it'll be difficult to turn it back off - the game really is better when played that way, and the combination of a stick for character movement and gyro for fine aiming remains the next best thing to a keyboard and mouse, making many online Splatoon players frighteningly fast and accurate.

Nintendo is beginning to get a good track record with these Switch ports, and I'm honestly excited for more from them. Much like Mario Kart 8 Deluxe this is a strong, definitive version of the gameplay presented in the original Splatoon - except this has more actual, proper sequel stuff going on. As mentioned earlier, this is more subtle iteration than the outright reinvention Nintendo often does - but the additions and tweaks are smart and welcome, making this an even better execution of a brilliant idea. This is a little formulaic, but I just want to run down some of the key additions one-by-one.

So, first off - single-player content! Splatoon's most iconic characters, Callie and Marie, head up the narrative thrust in the sequel, and hero mode here is much improved from the campaign levels offered in the original Splatoon. The narrative is self-aware and cute if not exactly thrilling, but the star of the show here is actually the stage design. The main problem with the original game's solo offering is fixed in a most simple way - by offering up a wide variety of levels with different objectives, layouts and lots of level-unique gimmicks you have to work with and work around.

This vastly improved level design pairs off with a much wider variety of enemies to face off against, and some really smart, challenging boss encounters that I actually feel like I want to play through again - something that comes as a bit of a shocker. It's better in every way.

The new Salmon Run mode is an all-new multiplayer mode that allows up to four players to team up to face off against waves of enemies. It's basically what is best known as Horde mode in a variety of other games, but Splatoon's natural gameplay adjustments from your average shooter make Salmon Run feel even more unique. In each wave enemies appear that can spray out debilitating ink in a variety of ways, and it'll be up to your team not only to survive and take enemies out but also to keep on spreading your own ink. The easiest way to get overwhelmed is to find yourself boxed in by enemy ink in this, a fast-paced mode which emphasizes the power of being fully mobile and flexible. 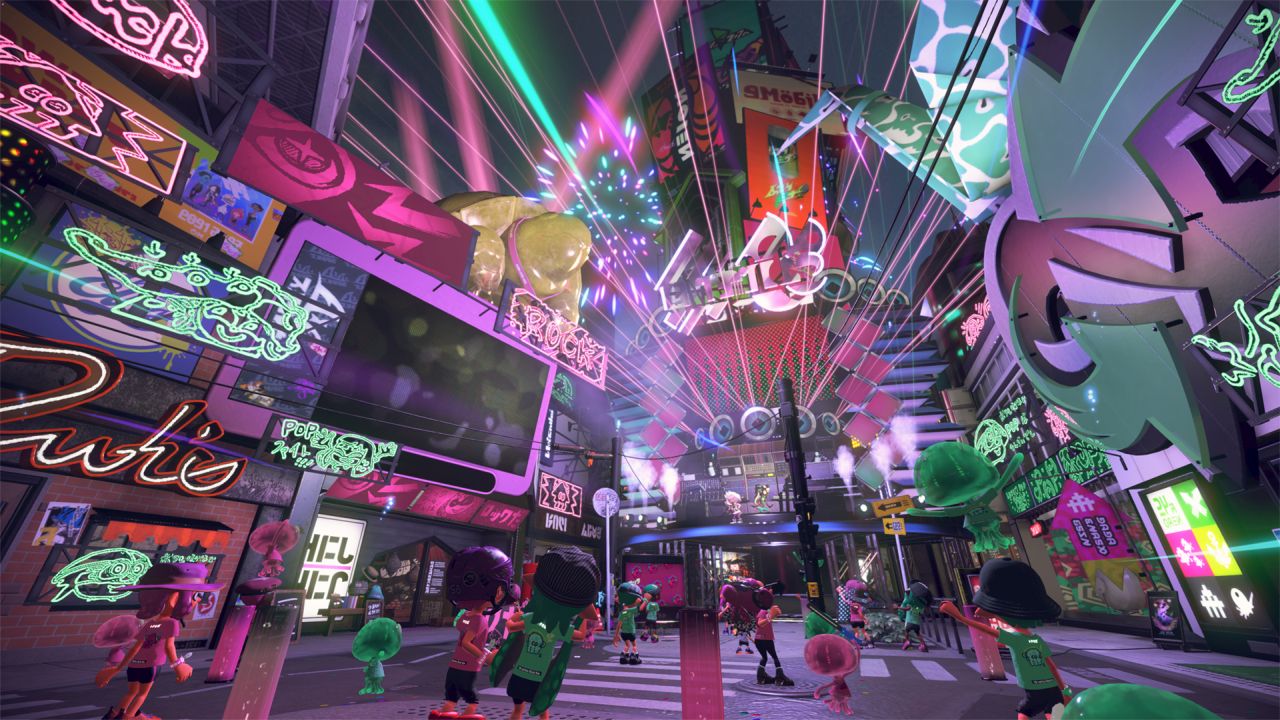 There's a level of objective-driven design to surviving too, with egg items needing to be poached from enemies to progress. Salmon Run honestly might be my new favourite Splatoon mode, a hectic and exhilarating experience that'll have you screaming at your team mates provided you're willing to negotiate with Nintendo's rubbish online chat solution or find an alternative. In a nice touch Salmon Run's difficulty runs on a sliding percentage-based scale, and higher difficulties get seriously taxing. It's a mode I can see myself going out of my way to schedule play sessions with friends to tackle higher levels of.

"This is a release that honestly barely deserves the moniker of sequel. The question of if you should get this game is answered pretty simply: how much did you enjoy the original Splatoon?"

There is, of course, a variety of new weapons, clothes and other gear too. Some of this is just cosmetic, while the new weapons have unique functionality and specials. If Turf War begins to wear thin, there are more objective-driven game modes available to play online too. Some weapons have been rebalanced, and generally the changes are smart. It's all good. It's all Splatoon.

Splatoon was good before, however, and that's this game's blessing and curse all at once. While some of the new additions are particularly welcome, especially Salmon Run, this really is a release that honestly barely deserves the moniker of sequel. The question of if you should get this game is answered pretty simply: how much did you enjoy the original Splatoon?

If you never got around to playing the original Splatoon 2 is especially worth a try as it's one of the freshest shooters in years - but if you have it on Wii U you already know if this is a must-buy or one to skip. This is the best Splatoon has ever been, with its excellent core concept now reaching a near-perfect critical mass. Everything has been improved, and its jump-in, quick-fire nature makes it perfect for the Switch and its two modes - just keep in mind that it is absolutely more of the same.