Like many games released over the past few years, Skater XL isn't finished. In some places it feels like the parts are all there, but developer Easy Day Studios struggles to assemble them - the trucks are too loose, the griptape has bubbles and the bearings are crusty.

If you drill down to what makes a trick, Skater XL captures the core of skateboarding well. You can initiate a trick easily enough with each analog stick representing, to some extent, the movement of your feet. It's not as frustrating and fussy as Session, and with a few rolls and flicks of the sticks you can ollie and flip into an impressive trick on flatland. 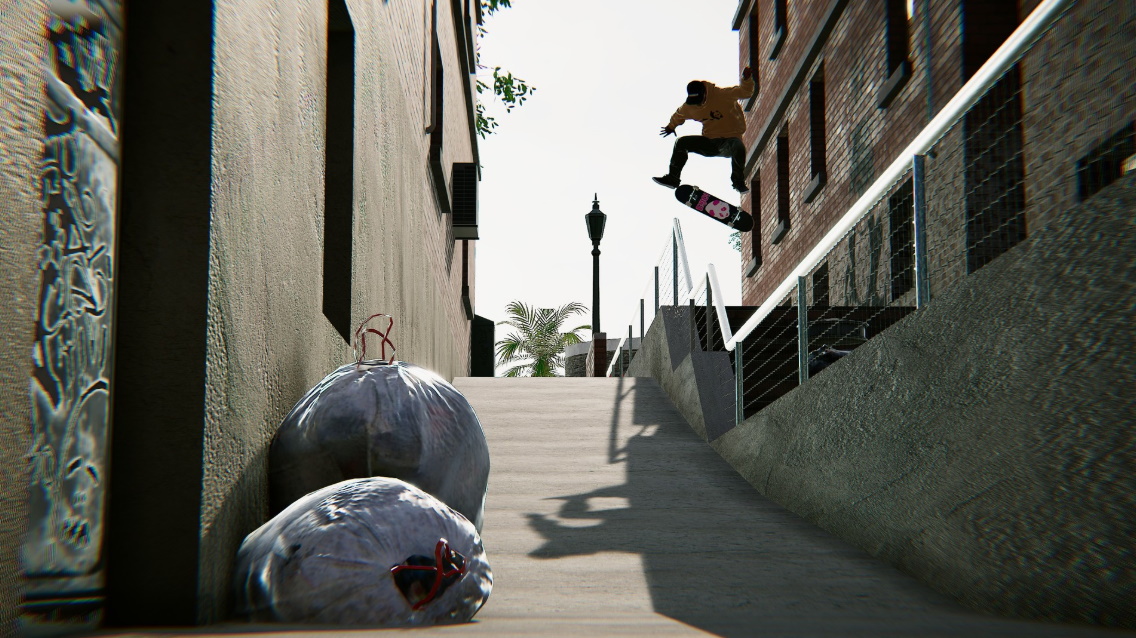 This fan-made map is based on the glorious spots of Barcelona.

That's easy enough, but the skill here is in timing it correctly, landing it on a different elevation, or placing a part of the board - trucks, tail, nose - where you think it should go on that ledge or rail. In the old Tony Hawk games (and Skate to some extent) there was a magnetic attraction that sucked you onto a bar or rail.

In Skater XL it's all about you manipulating the board to grind that curb, pop at the top of the stairs or noseslide the picnic table. Screw up your timing or placement and you're left with a weird staccato bail. In that sense it feels like you're in control of your feet and the board, and placing a trick with accuracy is a real buzz. Link five or six together in a run and it feels like a proper achievement. I also have to say that this is the first skating game I've ever played to absolutely nail the feeling of a powerslide at speed. It's exhilarating.

But the buzz killer is when you fuck it up and the game snatches control to deliver a truly ugly physics bail. You may have deserved it, but it's an eyesore when your character model is stuck in a wall or bent backwards through a car. It's at that point that Skater XL hits you with a sense of amateurism, highlighting its unfinished nature. Pull back from that moment and you'll see it throughout the whole game.

The problem seems to be that some maps just aren't optimised for the tricks. What works well on the school level (easily the best and most complete map) feels impossible elsewhere. Your character rolls with speed up to an obstacle and suddenly just hangs up on a ledge or lip for no apparent reason, the physics having a brain fart before deciding to just let your little dude crumple in a heap. In some areas Skater XL feels complete, in others not ready for release. It's more pronounced on any transition skating - vert, volcanoes, pipes - so the Mega Ramp-style map is pretty much a bust unless you want to make YouTube Fail videos over and over. Shipping with only five levels from the development team and three from the community doesn't cut it when half of those are either unskatable or just tiny by nature. I appreciate the LA courthouse map is based on the real thing, but it doesn't make a good skating experience for a video game. 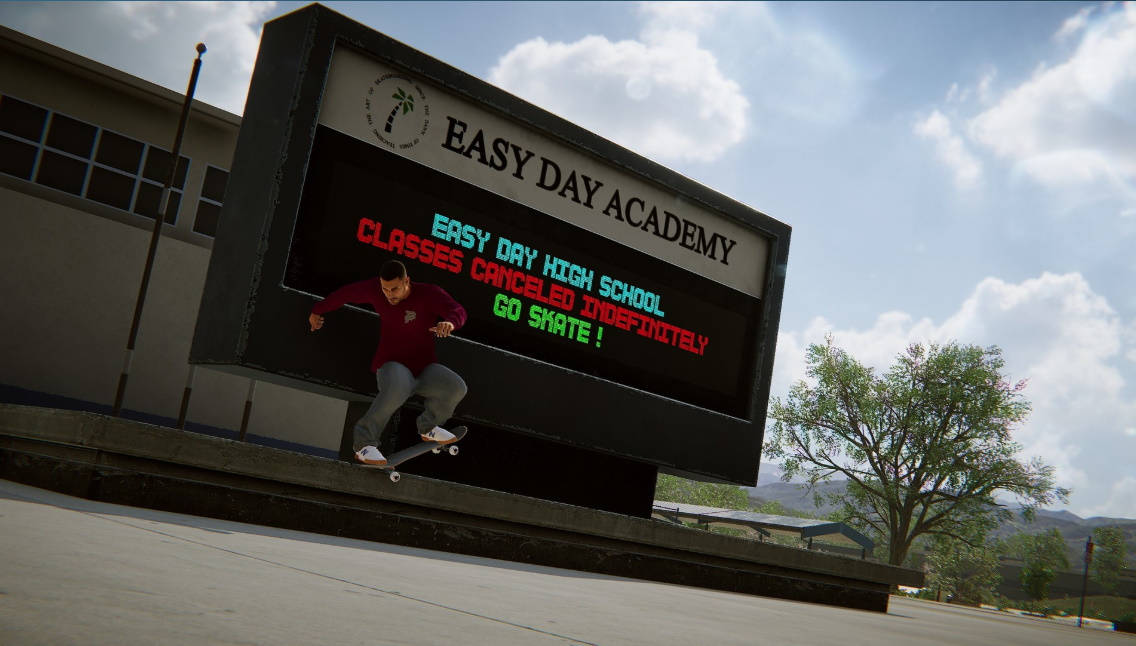 The school is easily the most accomplished map. One of only five from the developer.

Skater XL isn't an ugly game, but ironically it lacks pop. There's a reason for this, I think, in that it enables you to see and plan a line of four or five tricks, while avoiding obstacles such as sign posts, or making use of a fire hydrant out the corner of your eye. It helps when improvising too - you can judge if you've got enough space between curbs for a cheeky manual, or just think "sod it" at the last second and drop over the stair rails instead of grinding into them. But because of that simplicity it can appear distinctly dull, and with flat lighting and simple shadows there's little to appreciate in its world beyond the concrete and brickwork. There's beauty in real-world skatespots that isn't captured here; no wax shining on a chipped curb or scuff marks up a wall. There's no traffic in its streets, no pedestrians, no movement, no sign of life at all. That seems a remarkable oversight for a game all about momentum. It's a sandbox in the plainest sense.

Because there's no one else in Skater XL's world, whether real or otherwise, it's very much a quiet solo session all the way. There are challenges and lines to repeat which give you a good understanding of how to read each map, the way ledges and obstacles have been placed, but you're never chasing a hidden tape or trying to get a photo for a front cover. It's great that goals are whatever you set yourself - a clear indication that the development team understand skating - and it's about fun and freedom in the moment. But not being able to experience that with others is a missed opportunity. Skater XL already has a large and dedicated community, but you wouldn't know it from skating in these empty streets. 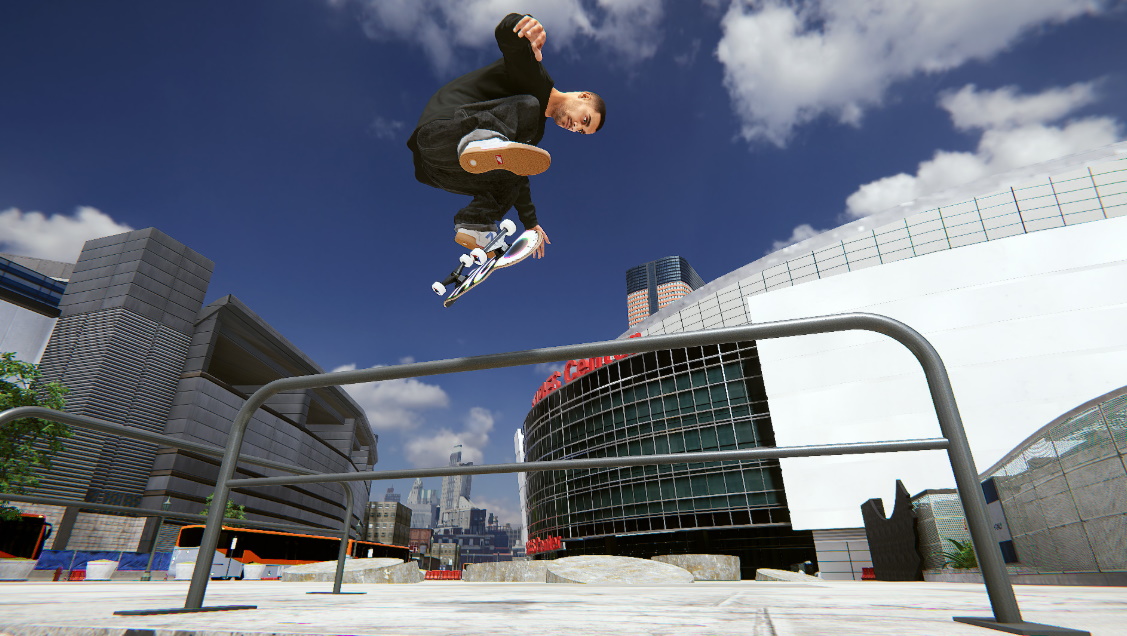 The closest you'll get to brightening up and personalising the world of Skater XL is customising your skater. But options are limited with a handful of real-world skate brands. It's good to see Grimplestix, Ricta, Grizzly and Lakai in there with the better known mall brands like DC and Santa Cruz - again, a sign that the development team reflects the culture. But with a very limited stock of preset models, four pros (all male, which is disappointing when you consider the growth of diversity and acceptance in skateboarding over the past five years) you can only make a rough approximation of yourself and kit it out with some dream gear. Accentuating the feeling that Easy Day is doing just enough to get by is the tame soundtrack featuring a few decent rock songs. I appreciate music is subjective, but when the hiphop selection seems to be almost all instrumentals, it sounds homemade and seems included as a token effort. Licensing is expensive, I guess.

There's the making of a good skating game here, but it's very early days for something asking for £35. There's a lack of extras you'd take for granted in a skating game - there's no ability to build your own park or move obstacles, and the video capture is basic and liable to highlight the incomplete nature of the package. It's not unfair to compare it to other skating games that have better features, whether park building from 15 year-old Tony Hawk games or Session's more recent Filmer Mode. This feels bare bones.

What Skater XL does well is make you obsess over an 8-set of stairs, or return again and again to a simple curb. You will keep going back to line up the perfect angle, the exact spot to crouch into an ollie, tre flip and land a crooked grind. That's great, that's street skating in its essence, and it's an achievement to capture that. But outside of that microcosm, as soon as you pan out, it steps on its own shoelaces and stumbles into a bush.