This weekend the public got a first glimpse at combat and training in Shenmue 3 via an all-new trailer - but behind-closed-doors, Shenmue creator Yu Suzuki was showing off a whole lot more.

Shenmue 3 was the star of the show at MAGIC 2019, a European video games and anime convention laid on by Shibuya Productions, a small, young company that happens to be co-publishing the continuation of this adventure alongside Deep Silver. Shenmue book-ends the event, the day kicking off in earnest with a verbal presentation from Yu Suzuki and ending with the reveal of the all-new trailer that was later posted online for all to see.

Past a couple of stony-faced security guards is a little side room of the convention that whispered rumors suggest contains a playable build of the game. That rumor is sadly only partly true - we couldn't play Shenmue 3, but in that room Yu Suzuki was happily, proudly showing off demos of the game he'd recorded a few nights prior. Based on how insanely devoted some of the fans we saw were, it's probably for the best they had the security guards.

The setup is sort of endearing in a sense. MAGIC is not the slick operation of a Gamescom or PAX, and nor is the nature of this demo. There's none of that common bluster or showmanship designed to paper over the cracks - no giant Shenmue artwork standees or statues, no elaborate room design for the hands-on session: it's a bare meeting room, a legendary game designer, a translator, a laptop and some nervous PRs listening in from the sidelines, hoping for positive impressions.

I can't help but think that this event and this room is in many ways demonstrative of Shenmue 3 in general. It may very well be a sequel to one of the most expensive, elaborate triple-A games of all time, but Shenmue 3 has the look and feel of something more modest. Triple-A this is not - but Shenmue 3 also knows it, rolls with it, and makes it work.

So, yes - rather than look at the game blown up on a massive screen with a carefully-scripted presentation, I crowd around a 17-inch laptop screen with Suzuki and his translator. That fits Shenmue 3 - a game that seems to have scope and ambition with no end but also clearly a very strict budget. 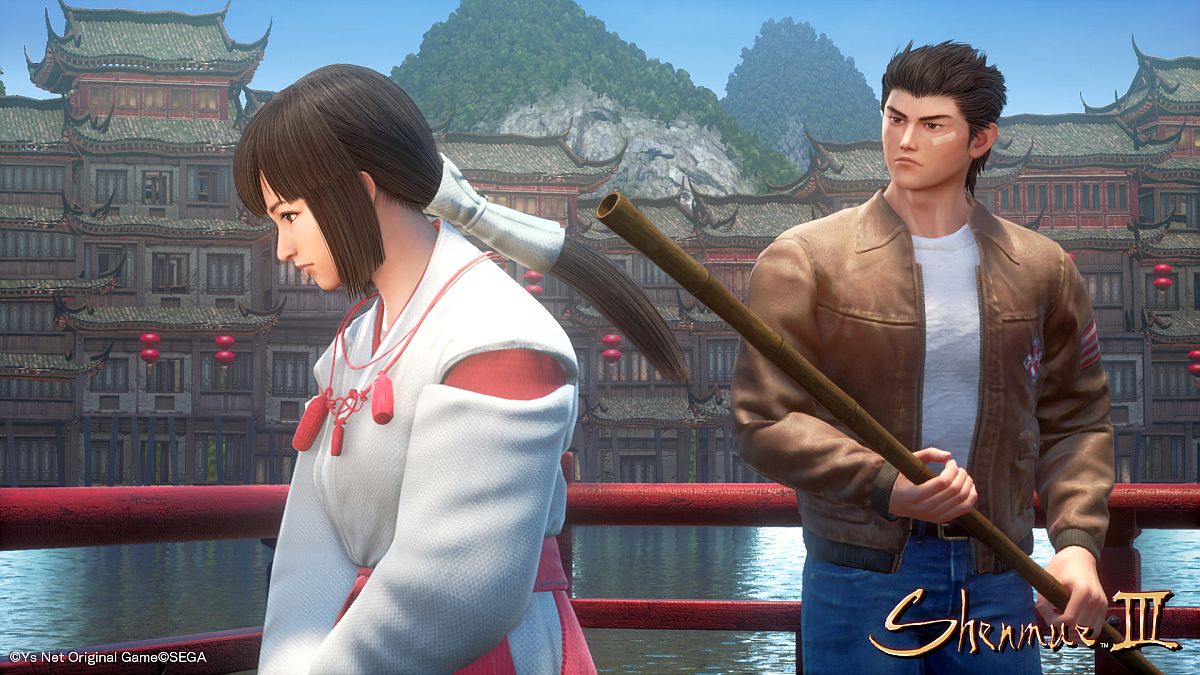 That's the main thing that is made clear watching the game in action, too. This is real footage, with user interface elements and the natural, not-quite-perfect movement of a real person playing it - and seeing this side of Shenmue 3, everything clicks for me.

Past trailers have showcased story sequences and offered tiny glimpses of Ryo and Shenhua's adventures that have invited criticism: weird animation, iffy character models, a more exaggerated art style. In motion it makes sense, however, and it actually looks pretty good.

In places there's a strange disparity. The environments are gorgeous, making use of the rendering chops of Unreal Engine 4 to great effect. Shenmue is all about the passage of time, so as the sun races through the sky, light filters through trees and rural Chinese buildings down to ground level in a beautiful manner. It also shoots for a high level of detail: if it rains, previously dry ground might turn to a muddy mush and so on.

But Ryo himself looks a little like he tumbled out of the last generation, and in some of his animation the generation before that. He's still got that same old stilted, robotic walk he had previously. I'm honestly not sure if this is the case simply because they couldn't make it look more real, or if it's a deliberate, slavish devotion to certain elements of the first two games in the series.

Despite taking Ryo to a more rustic, countryside-based setting, Shenmue 3 is just as densely packed as its predecessor. When the demo reaches a town, there's a range of NPCs throughout. Suzuki says that the Choubu region in the game has over 500 NPCs. Talking to them is the same old Shenmue fare - it's not so much focused on choice as world building, each conversation offering up a little context if not clues as to how to further progress.

One thing that's changed, Suzuki says, is that shops will now be more plentiful in Shenmue 3 and stock a far wider range of items. He explained that in past games there were fewer stores but you could have longer, in-depth conversations with their owners. In this game, owners aren't as fleshed out but the shops themselves are. 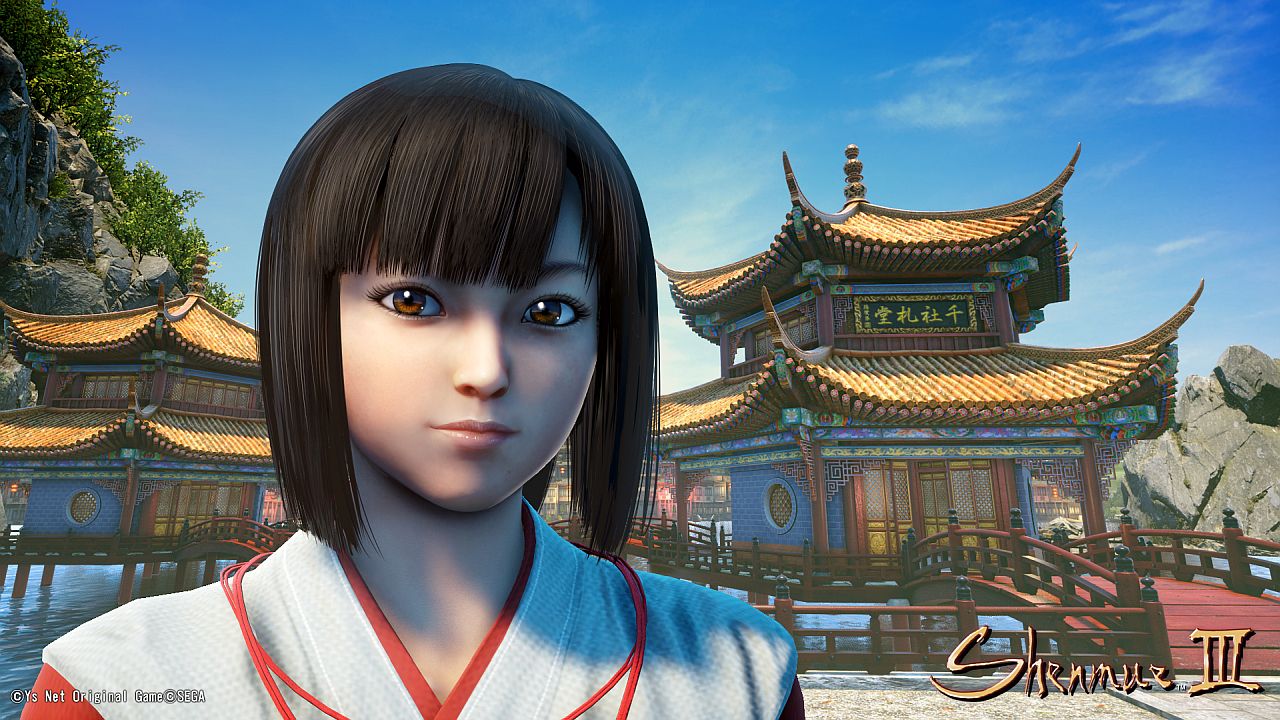 It's actually very different: the shop I see has an inventory screen where you can scroll through items and a range of things to buy. Prices will vary based on location, reflecting economics, and you'll need different items to feed, heal and buff yourself. If a player wants to be sensible with their money, Suzuki suggests that they remember where certain items are cheapest and travel to buy.

All of this links back to one core fact of Shenmue 3: it's also more of a proper role-playing game. Ryo will have access to all of his martial arts moves from the previous games, but he'll still have to master them. Moves level up in a RPG fashion with practice, which now plays a greater role in Ryo's revenge quest.

Practice has always been a part of Shenmue, of course. I have fond memories of whittling hours away in Sakuragaoka Park, but in Shenmue 3 it has a more active effect in that you can watch bars grow as well as see each move improve as you level them up. Practice has an active in-game impact aside from your personal skill with the controller improving. There's also an easier input option for combat, so if you want to focus on this and worry less about fighting game style move inputs, that's totally an option. As well as moves improving, more general experience bars in a variety of categories will track Ryo's progress as you fight and practice.

The need for practice is baked into the very premise of the game, too. While we've been asked not to talk about the specific flow of quests lest it change, in this demo I can reveal that one character won't give up information unless you best him in a fight. If you fail to beat him the first time, the suggestion then is obvious: go away, train, then come back to beat his ass. This is really what Ryo's pilgrimage through China is all about anyway; he has to become strong enough to take down his father's killer. 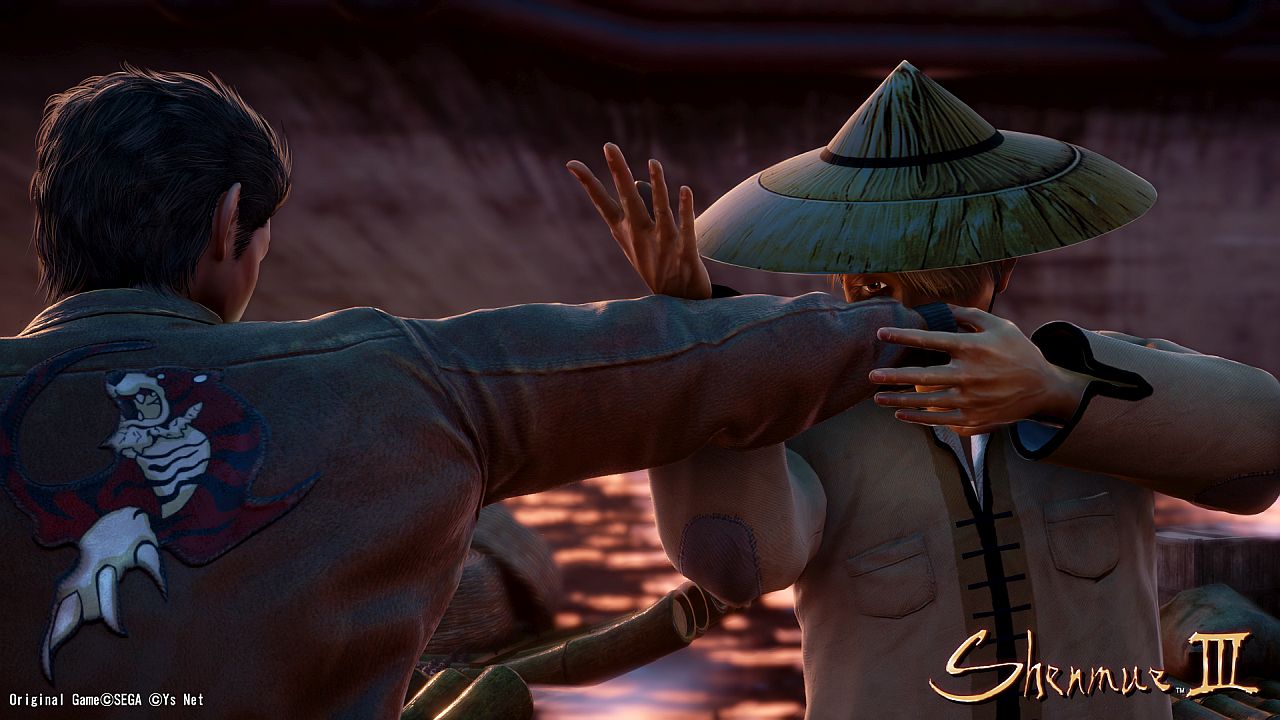 So in the public trailer when you see Ryo begging an old man for training and sparring with a woman who looks a little like Virtua Fighter's Pai, he's levelling up his martial arts both in-universe and in that classic video-gamey way. Players will need to beware of spending too much time grinding on training to max out every move in Ryo's already-huge repertoire, however: Suzuki confirmed that like previous entries Shenmue 3's narrative has a time limit, meaning procrastinating too much could lead to a Game Over.

I really like this aspect of Shenmue 3's design. It does appear that Suzuki is well aware that reaching the heady, revolutionary heights of the original Shenmue is an impossible task on the budget he now has. As such this is a strange little game. In some ways it feels as though it fell out of the early 2000s in a time capsule: its design is a clear iteration and continuation of what came before in the series, not a reinvention as some might have expected after so long.

Visually, too, there's this same design playbook: there's nowhere near the budget to achieve hyper-realistic characters as in the previous games, so there's a shift to a more stylised look that loses the hyper realism but evokes the style of the previous entries, especially the second which was always more outlandish and experimental in style terms. This of course comes with caveats - lip-sync looks unnatural and while combat animation is silky smooth, there's a lot of other areas where movement is cheap-looking and puzzling, including that walking animation where Ryo resembles a robot that's gone to the toilet in its blue jeans. One suspects that most Shenmue fans will be willing to take the rough with the smooth on that front, however, myself included.

The video game industry is reaching that sort of age where nostalgic revivals are becoming ever-more common. Usually this takes the form of slick, modestly-budgeted titles in the style of classic games, like a Sonic Mania or Mega Man 11. Other times it takes the form of a big-budget remake, modern in every sense while evoking the fondly-remembered classic - Resident Evil 2 or Final Fantasy 7 (if it ever comes out). Shenmue 3 appears to occupy an as-yet mostly untouched space: a halfway house between the two. It's far more ambitious than other retro revival projects of this type, devoted to accuracy to the original era - and that excitingly means it really does feel like a late nineties/early noughties Sega title - warts and all. That won't be for everyone, but in terms of accomplishing its stated mission, Shenmue 3 looks to be on track.

Shenmue 3 is out this August for PS4 and PC. Disclosure: VG247 visited the MAGIC 2019 convention at the invitation of publisher Deep Silver, who provided travel and accommodation.