As Red Dead Redemption 2 PC is now available on via Epic Games Store and the Rockstar Launcher, we've republished our original review from October 2018.

Red Dead Redemption 2 on PC is essentially the same story and game, with a few additions - photo mode, 8K resolution support, unlocked frame rates and a few other PC additions - you can read how much they change things in our PC playtest here.

Herding stray cattle in a storm. Stepping off a train as a drunk man stumbles out of a saloon. Watching the sun set on Mexico as José González’s Far Away marks the halfway point in an epic adventure - moments of quiet reflection dominate my memories of Red Dead Redemption.

John Marston’s story was bespattered with brutality, but beauty was always only a dusty verge away in a world where violence and nature collide. Rockstar knows exactly what made the first game special and - as crunchy and satisfying as they were - it wasn’t the gunfights.

With the prequel, the GTA developer doubles down on the serene, delivering a shooting game that isn’t afraid of keeping your guns in their holsters. Red Dead Redemption 2 is the most confident, mature game Rockstar has ever made.

You can see it immediately in the systems. The language of video games is set. We all know that squeezing the left trigger targets an enemy and the right trigger ends their virtual lives. Here, the left trigger isn’t used solely for murder, however - it’s how you interact with every part of the world.

Lock onto a pedestrian and you can give them a tip of the hat and a friendly greeting - all contextual and based on a variety of factors. You can also antagonise them if you’d rather play as a douchebag. This also works for animals, allowing you to study them, whistle, pet them, and scold them. Rather than separating conversations out into dialogue choices and set scenes, this all happens seamlessly in-game.

Bullets aren’t your only way of impacting this world, and the fact these conversations aren’t frozen in time - like dialogue options in an RPG - keeps things fluid. It’s a genuine piece of genre-leading innovation.

Like I said, we are all fluent in the language of games: big ammo dumps mean there’s a boss fight coming; obvious waist-high cover warns of an impending gun battle; and characters are only capable of certain feats within cutscenes. Red Dead Redemption 2 evolves that language and creates a world where it feels like anything could happen at any time. Even in the final few hours of this generous, grand adventure, I was still seeing one-off animations, unique motion capture playing out on characters in real-time, and new surprises appearing in the world.

It would be easy for me to list a bunch of things that happened to me when out exploring this rugged, wild landscape, reeling off the endless anecdotes, but I want to explain how it feels to be a part of this unpredictable ecosystem. You are not the sole agent of change.

As Arthur Morgan, you are a member of the Van der Linde gang. As such, you are expected to contribute your share to the camp: offering up a percentage of your cash, ammo, medicine, and hunting goods. But the rest of your gang don’t wait for you to fill up the coffers - they also loot bodies, grab items, and take them back to camp. 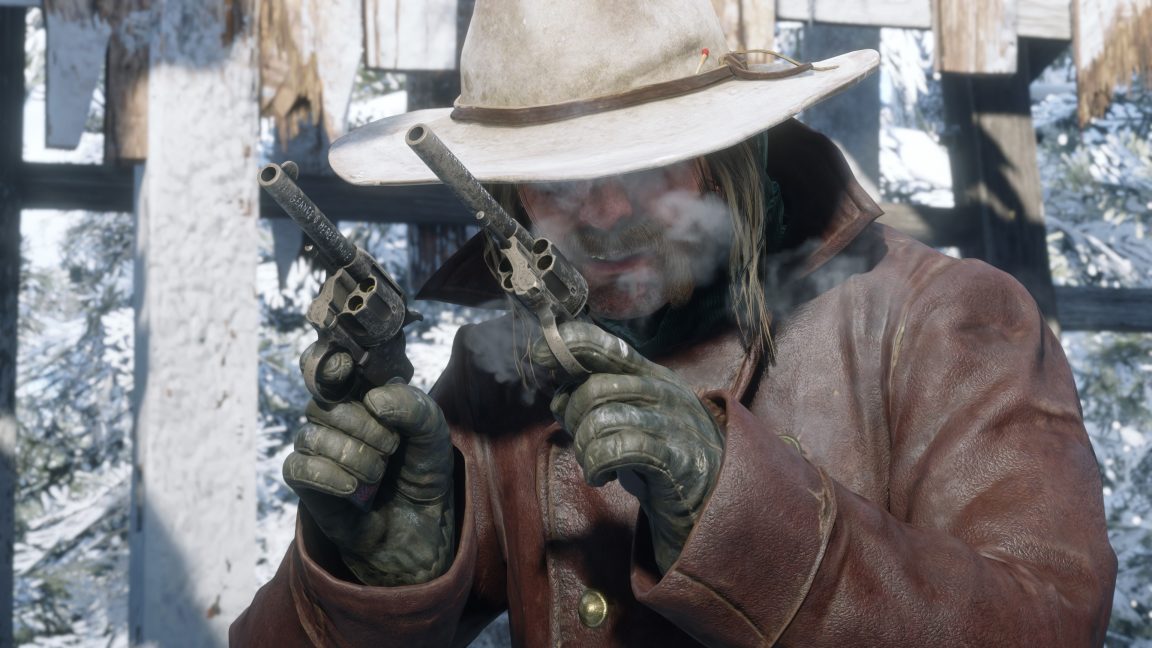 Attend a party in camp and there are people telling stories by the fire, gang members playing drinking games, people singing, people dancing, and couples talking among themselves. Just like in real life, you can’t hope to see and hear it all - you simply revel in the ambience and catch snippets in the noise, inserting yourself where you can.

The world itself also evolves as you progress. Buildings stay burned down, houses are built, people die, people join your group, and whole towns go into lockdown over your deeds as your camp moves from place to place. Whether you are up in the snow-capped mountains, in the dank swamps of the bayou, or hiding out in the wild forests on edge of a coal mining town, soot-caked to your face from travelling through it on the way to camp, the game makes brilliant use of its space.

You are always seeing some new place, and every inch of the map is packed with granular details and stunning horizons. The way the light hits the dusk mist gives the game a painterly, dreamlike, hyper-real quality.

This is easily Rockstar’s best virtual place. Artistically, it is miles ahead of anything else. The map isn’t just gorgeous, either - it’s massively varied and teeming with life (over 200 species of animals can be found, each with their own unique behaviour), and you’re still seeing new areas in the final hours of this massive adventure. The way the music blends with exploration and swells for combat also pulls you into the fantasy, and vocal tracks are used sparingly and to stunning effect to highlight big moments in the story.

Arthur Morgan’s tale is much more fleshed out than John Marston’s was in Red Dead Redemption. The fact you’re often paired with a companion gives the writing a chance to really dig into the characters as they play off each other. Even 40-50 hours in, one-off conversations with side characters add layers to the protagonist, revealing surprising facts about his past that shed light on his personality and his complex relationship with gang leader Dutch.

Arthur's story is underpinned by a bittersweet irony, and it really feels like a tale of redemption this time. When the credits roll, you will appreciate Arthur as a character far more than you ever did of Red Dead protagonist John Marston. Saying that, this prequel does an incredible job of adding depth to the characters you know from the first game as well - you really understand Marston’s plight by seeing him live through his outlaw days, as well as the struggles he puts his wife and son through due to misplaced loyalty. It’s the perfect companion piece, complimenting the story and characters at every turn.

Rockstar has previously been criticised for its writing of women, and that feels like something the writing team is addressing here. Each woman in the game has agency, and they all make their own decisions, bad and good. Sadie Adler, a widow who joins the gang early in the game, has one of the best character arcs in the entire story, and she’s up there with some of my favourite video game characters of all time.

Red Dead Redemption 2 is a slow burning character study, interspersed with intense gunfights and one-off set-pieces. One minute you might be in a shootout, and the next you might be scooping up cow turds with a pitchfork. It might sound weird, but the moments of quiet give the punchy, tactile, and weighty gunplay something to contrast against.

The Euphoria physics are still the best in gaming, seeing enemies clutch wounded areas, topple over railings, or fall into their stirrups to be dragged along by their horse. The weight of Arthur’s movement takes some getting used to and the aiming is a little more methodical than you might expect, but you feel like you’re controlling a person and combat really sings once it clicks because of how reactive the enemy AI is. 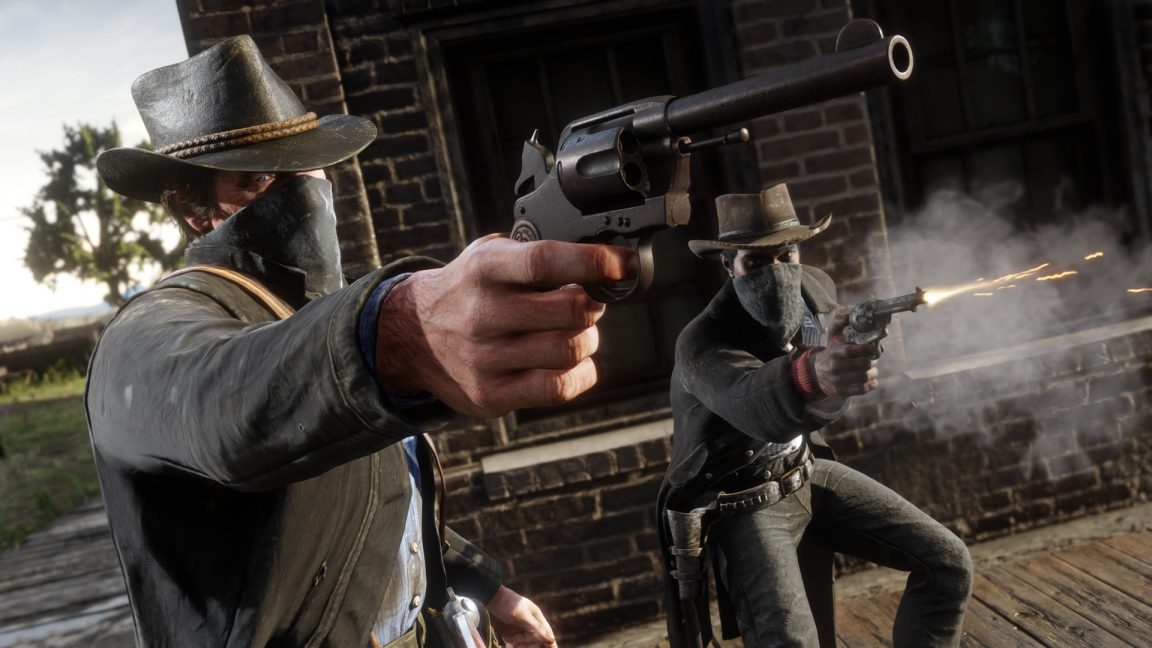 There’s also a lot of riding around, which I didn’t mind, but experiences may vary. You can unlock fast travel, but you have to travel quite far a lot of the time just to reach the places where you can fast travel from.

Rockstar doesn’t want to pull you out of the experience because it wants the journey to be an integral part of the story. Remember that time you rode off a cliff and you had to mercy kill Gary - your horse - before trekking back to civilisation, only for a pack of wolves to attack you? These unscripted moments stick with you as long as the gut punches of the story. Travelling across the world isn’t meant to be seen as a chore, it’s just more opportunity to see everything the game has to offer.

In the entire game, I played two missions where I had to tail someone. I finished every stranger quest, every sidequest, and each main mission, and I was constantly surprised by the variety Rockstar has packed in. I won’t spoil anything here, but some of the missions are among the best, most memorable things I’ve ever played in an open world game. You should discover it all for yourself.

Red Dead Redemption 2 is a brave prequel that isn’t afraid of taking risks. It is innovative, surprising, stunning, dramatic, and generous - a highlight of this generation and a benchmark for other open world games to aspire to.