id Software creative director Tim Willits talks to Johnny Cullen about the studio's 20th anniversary, the next generation and the launch of a new IP, as RAGE releases today in the UK.

Announced at Quakecon 2007 in Dallas.

Was originally to be published by EA Partners, but Zenimax and Bethesda took over publishing rights five months after buying the developer in December 2009.

Tim Willits is optimistic that the game he's worked on for the past five years, id Software's first new IP in 15 years since Quake's original release in 1996, will turn out well in a crowded holiday period. And it seems like that might be the case.

Despite a few issues with the PC version, RAGE is holding up relatively well on the scoring front, getting an 84 on PS3, 83 on 360 and 82 on PC.

I spoke to him before the game's release this week at Eurogamer Expo a couple of weeks back. Here's what he said.

VG247: After nearly five years, give or take, you've approached the finishing line on RAGE. How does that feel?

Tim Willits: Very exciting. The game's all wrapped up, we have people playing it and they're having a fun time. It's very exciting to have the 20-year anniversary and to launch a brand new game. It continues the id legacy of doing what we want and we have new technology, a new paradigm of cross-platform. We've always been PC-centric, but now we're not. It's a new game; we're very excited.

But it's so long since you announced it. I think it was Pete [Hines, VP of PR and marketing, Bethesda] that said recently you guys had announced it too early. I know you were initially with EA Partners before you were bought by ZeniMax, but what would be your opinion: do you think you announced the game too early?

It's always easy to play Monday morning quarterback, but no. The thing is John [Carmack, id tech boss] loves talking about cool stuff. At the end of the day, it doesn’t matter. For us, now we’re right around the corner and doing these events, the game’s looking great, plays great. Whether you’re talking about it early or late, or you announce this or you announce that, or you have this campaign or that campaign, all it comes down to the game being fun. And the game’s a heck lot of fun.

How will you feel if there's a wrong turn with the reception at release?

This game's not much different than when we released DOOM 3, Quake III, Quake II. People’s anticipations of what the game is, people’s expectations of what id Software does and has done in the past – yeah, we don’t let those things stress us out. But I do think RAGE will change people’s perceptions of the company. It’s a really different type of experience that we’ve done in the past. Yes, it’s a first-person shooter, but it’s a lot different. I’m proud of the fact we don’t do exactly the same game every single time.

Lots of game companies do that all the time: we don’t. So it’s very exciting to work on something new and exciting.

It's the 20th anniversary of id. You basically made the FPS genre; you've said that yourself. From a personal perspective, how much have you enjoyed seen id grow?

I'm excited. I've been working at the company for 17 years and there are still times when I have to stop and pinch myself and say to myself, 'I'm making videogames for 17 years, this is awesome!' And the world is shrinking and I go on these tours and everybody knows what we're working on.

"But I do think RAGE will change people’s perceptions of the company. It’s a really different type of experience that we’ve done in the past. Yes, it’s a first-person shooter, but it’s a lot different. I’m proud of the fact we don’t do exactly the same game every single time. Lots of game companies do that all the time: we don’t."

And we release globally now. We have new global markets, global marketing campaigns. It's so exciting, and it's thrilling to continue to work in the industry and continue to make the games I love to play. And the industry itself is really hot right now: there's millions of gamers, millions of new gamers that coming onto the scene. There's lots of opportunities, not just for the guys who make the big mega-hits, but for people working on mobile games, social games.

The future is very, very bright, for not only id, but really for the industry in general. It's a good time to be in the industry.

But there seems to be a bit of a downturn recently. Sales are down.

That's our global economy. But some of these games are just awesome. Every year, games just get better and better. So, I think the future's bright. Yeah, the economy maybe beating everyone down a little bit, but the games sure are not taking a hit.

There's so many AAA games coming out these days. We're approaching the holiday season, and there's going to be a worry that a couple of these games are going to crash and burn. Are you worried?

We're the only game in the top ten that is a new IP. People, frankly, may be getting tired of whatever games they've already been playing. But it's much better to be at the front of people's minds than to be long forgotten. The exciting thing about RAGE is that it's not part three of something; it doesn't follow the same cookie cutter formula that a lot of other mega-hits follow these days.

We could have taken the safe route and just kept making DOOM games for the past 20 years, but I think gamers are very intelligent. They know when there's new things. I have high-degree confidence we'll do very well.

Remind me, when did you guys go multi? It was DOOM 3 on Xbox?

Well, yeah. Vicarious Visions did the [Xbox version] of DOOM 3, which was alright. But that's one of the reasons we wanted to make id Tech 5 from the ground up. Start with a true, multi-core, multi-processing-type engine. A lot of developers have faced hurdles making their game run on PS3 or 360 because of older technologies; we've side-stepped because we've built everything up from the ground up.

And it's really exciting that all the assets, textures and levels that we've developed for one system work across all the systems. That is the future: cross-platform. It's difficult to develop a game for one platform, especially if you're a new IP. It's definitely the future. You'll want to throw that net as far and as wide as you can.

I want to stay on multi-plat for a second. Todd [Hollenshead, id CEO] mentioned at QuakeCon that going multi-platform enabled a richer experience with id's games compared to being PC-exclusive. What's your perspective on that?

Yeah, I'm not really sure what Todd was talking about. For us, our objective for RAGE was to deliver the same experience on all the systems. That's probably what he meant. You'll have to email Todd to get clarification on what he said.

You got into a lot of trouble recently over a certain DRM comment.

No, I'll clarify that. I was saying I personally feel that I think games being connected online all the time is great. I have zero issue with that. That has nothing to do with DRM. I think people were just being confused. Being online, always being connected, is the way of the future. I still think it's great. RAGE has standard Steam DRM.

As you'd say in England, 'Not to get their britches all bunched up.' But me personally? Yeah, I think being connected is great. I love it. I get updates, all my stats would be there.

Consumers these days, they don't really like being always connected because there are always going to be times when you're not, and you want to play games like Assassin's Creed or Diablo. That's where the problem lies.

OK. When are you not connected?

On a plane, or on a bus, or in a car, and you want to play Diablo III!

I could play StarCraft II on my Macbook if that had offline.

But do you? Really? No, but the possibility's there.

Well the possibility is silly. I mean really.

Where do you intend to go next-gen with id Tech 5?

This is more of a John-type question, but the great thing about id Tech 5 is it's very scaleable. John believes, and I believe John, that we will use this kernel, the core of id Tech 5, well into future. Heck, we can go on for ten years. 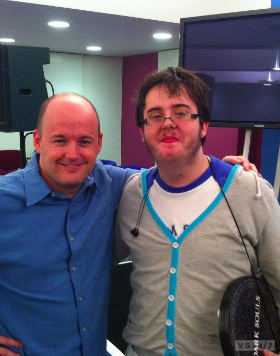 Tim Willits after his EG Expo
Behind Closed Doors session.

Look at Quake III: Quake III tech is still powering some of the greatest games out there. Yes, they don't call it Quake III tech anymore, but you know what I'm saying. We're very excited.

We have no clue about the next generation of consoles. We have no inside information, but we're very confident that our technology will easily scale right into the next generation. We made some very conscious efforts to create a tech that will get us well into the future. What about Wii U? Is that something id would be interested in?

To be honest, I haven't even looked at it. The Bethesda booth at E3 was next to Nintendo, but I never made it over there. I have no clue.

Could you still outsource games now you're with Bethesda? Is that something you'd like to do?

That's a decision that's above my head. Right now, I'm just focussing on getting RAGE done and then I'm going to help the guys finish up DOOM 4. So, whatever the organisation wants to do with those, I'll just follow suit.

That's question two! That's all I can say about that.

Answer me this at least: is it something we could hear about by the end of the year after RAGE has released?

Come on, you think I'm going to answer some questions about DOOM? They'll have to wait.

Tim Willits is creative director of id Software. RAGE is out now for PS3, 360 and PC. Watch the first half-hour of the game here.