Whether it’s the lush jungles and crystal oceans of the tropics or the parched deserts of the wasteland, Avalanche always excels at building worlds.

The Swedish developer often just doesn’t give you enough reason to explore these places. It’s not just a lack of stuff to do, either - the moment-to-moment play isn’t strong enough to encourage exploration. Rage 2 changes that.

I’ve become bored of the modern open-world template. There are some exceptions, but an in-game map that’s plastered with icons turns me off more than seeing a photo of Theresa May while I’m mid-coitus. Who can be arsed with all that busywork? What simple-minded idiot could find this entertaining? What fool could enjoy this? Me, it turns out. The secret? Make a good fucking game.

Though id Software has downplayed its involvement in Rage 2, you can tell Avalanche has been taking pointers from the Doom studio for this release. The result is as if someone plonked Doomguy straight into Mad Max while also implementing all the lessons Avalanche has learned over the years. 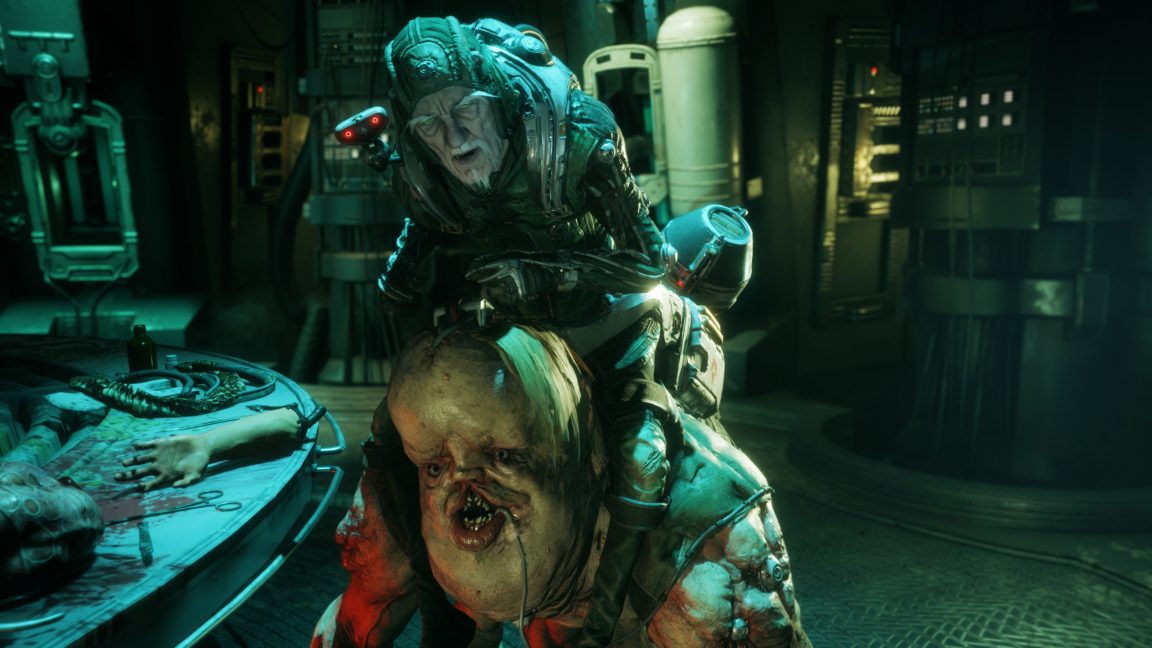 Rather than relying solely on guns, you step into the superpowered suit of a Ranger. In practical terms, it means you can double jump, hover above the battlefield, slam down with devastating force, and zip around with short bursts of speed, sliding into enemies and knocking them into the air before popping their heads like a clay pigeon.

Combat in Rage 2 is like a violent ballet, where every twist of your head results in a death and every step is forwards, into danger. It’s parkour with headshots.

The story pulling you through this carnage largely doesn’t matter, but here’s the setup: humanity was frozen inside time capsules for hundreds of years while the planet was terraformed. The bad guys are The Authority, a race of posthumans who believe they’re the next step in evolution. You know what that means - ethnic cleansing time, baby! I mostly zoned out - it seems Avalanche still can’t tell a decent story - but there’s enough personality here to keep you engaged.

After all, who would actually survive an apocalyptic cataclysm? Oddballs, that’s who. A personal highlight is a mad scientist whose body has been grafted onto a genetically-modified, overgrown child with a shit-filled nappy. The deformed mass he’s mounted to is a sorry sight, and it’s slightly unnerving to watch its mouth move in time with the doctor’s. 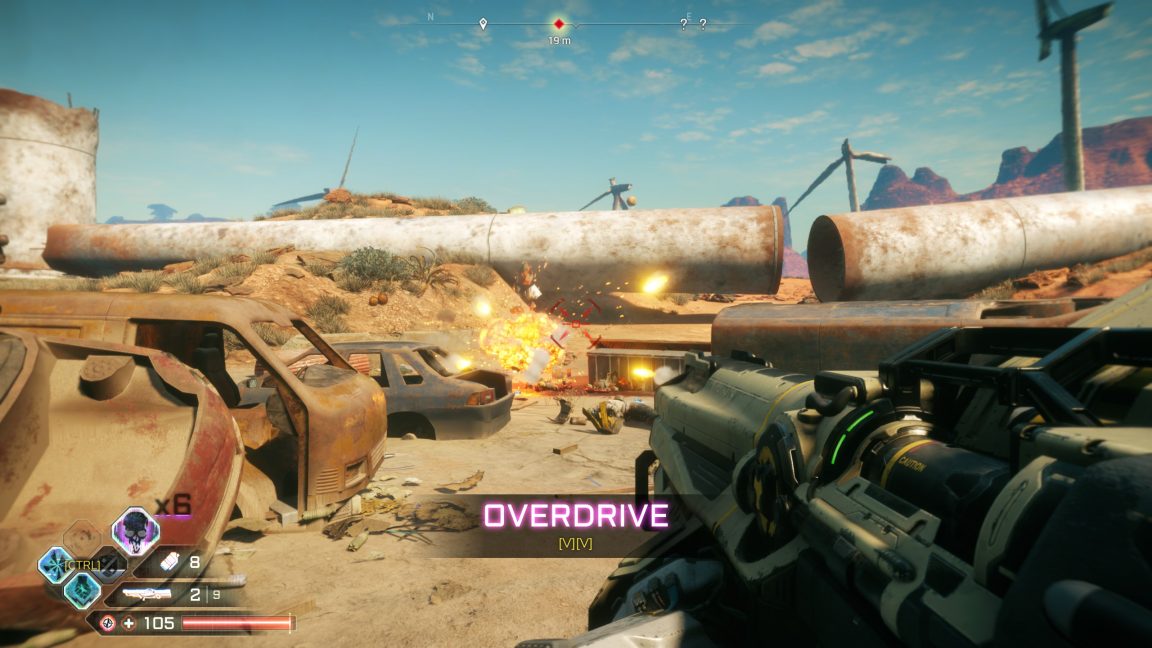 There’s a hyper-real quality to the art style, which makes this grotesque quality even worse (better). Much has already been said of the game’s distinct pink hue, but it’s the Ren & Stimpy-esque details that stand out, from varicose veins to pockmarked cheeks and shiny sweat rashes visible on skin. It’s gross, but I kinda love it.

The first Rage had the personality of Brandon Stark post-Three Eyed Raven lobotomy. It was a smear of brown on a beige wall. It was a natural Greek yoghurt with a splash of vanilla essence for taste. It was Stoke-on-Trent. If it wasn’t for the boomerang-esque, skull drilling wingstick in your hand, you wouldn’t even know this was the same series. Every issue I had with the first game has been improved upon, like that nerd at school who’s now a bodybuilder capable of snapping your neck with one arm. Rage 2 has soul.

The first hour or so doesn’t give off the best first impression, however. You’re in a bland environment, you’re fighting against the least interesting enemies, and you’re limited to a pistol, without the brilliant weapons or powers you get later on. Once it gets going, it’s rip-roaring stuff. 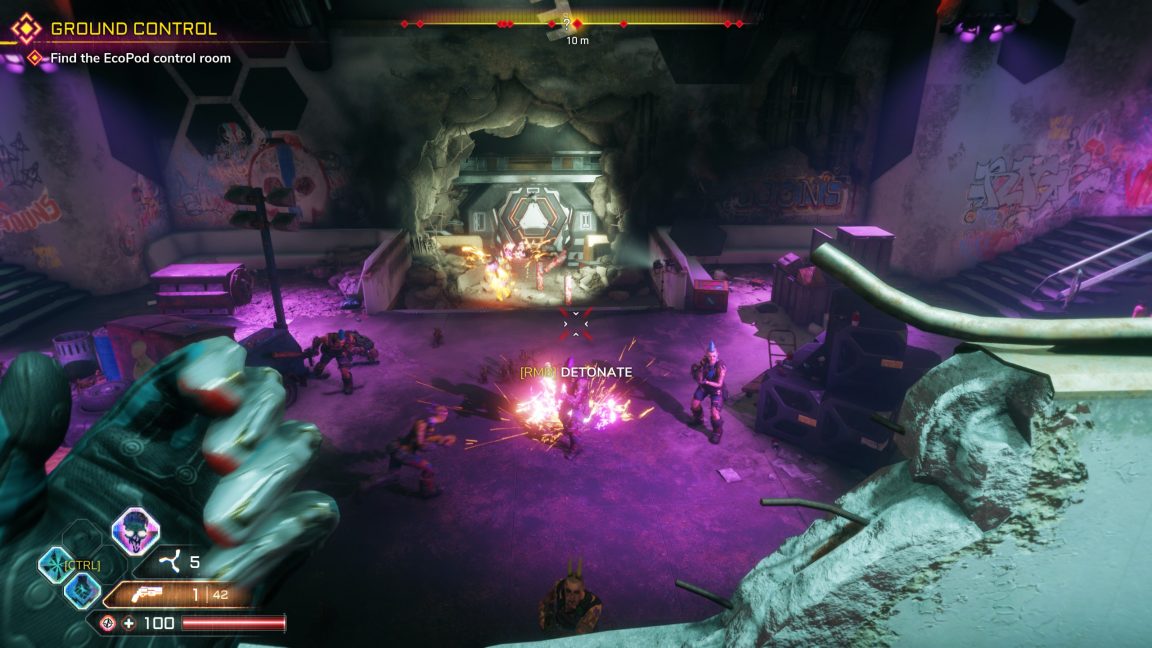 Rather than driving exclusively around featureless sand, here we have sopping swamplands, graveyards full of skyscrapers buried in the dunes, ghost towns, actual towns, lush forests, and impassable canyons. You can explore it all on foot, by car, by bike, by tank, and even by air. Anything you see can be piloted, and there are dozens of unique vehicles to unlock in a deep customisation menu.

My only real criticism of the progression system is how the game gates off some of its best stuff. A lot of players will likely assume that there are a bunch of powers, guns, and vehicles locked off by the story, but there are actually only a handful. All the best stuff is out there in the world, locked behind vault doors. If you can find them, they’re yours, and I suggest you spend a couple of hours tracking as many of these arks down as you can before you tackle the relatively short main story.

You really need to track all these toys down because every single weapon in Rage 2 is a buzz. The shotgun - which you get as part of the story - is one of the best shotguns I’ve ever used in a game. It’s deadly close up, but still works at range - aim down the sights and you fire a slug round, pummeling a distant foe with a kinetic blast and sending them falling to their death. Trigger Overdrive to amp up your attacks and your bullets become red-hot, fanning out in a wider spray and devastating anything they touch. Every single gun has these three modes. All of them feel and sound incredible.

It’s not often I talk about audio in a review because it’s one of those things we all take for granted. You notice it when it’s done badly, but you don’t give it enough credit when it elevates an experience. I’m telling you now: play Rage 2 with headphones or I will come to your house. Triggering Overdrive is like an aural assault, and the music complements every moment. Unfortunately, in the early build I played, there are a couple of issues - some character voice lines cut out, and I once had to exit to desktop because my helicopter rotors got stuck on repeat. I only encountered these issues a couple of times during my 12 hours with the game, however, and it’s easily forgotten when you bat a grenade back at an enemy with the butt of your gun.

Avalanche has always been good at creating convincing virtual explosions, or a sense of spectacle. Rage 2 continues that fiery tradition. You often shoot an enemy as they’re about to lob a cluster grenade, releasing it prematurely from their hands. This results in a chain reaction of explosions, smoke, blood, and body parts. There’s always some contraption dangling that’s sent swinging off by the blast. Enemies dive away from danger, or fall from the force before picking themselves up. It’s chaotic, but it’s still completely readable in the midst of all this madness - it lends the world an organic quality.

The interplay between the AI, your abilities, the physics of the world, and your guns is some of the best I’ve seen, and I never thought I would be saying anything like that about a sequel to Brown Shooter: Apocalypse. There’s much more to this than its kooky, pink-hued marketing campaign. If you sleep on it, you’re sleeping on one of the best - if not the best - single-player FPS games of this generation.