Pokemon X & Y had a reveal in the pages of Japanese magazine CoroCoro which has announced a new creature to GameFreak's ever-expanding repertoire. It's called Ninfia.

Gematsu reports that Ninfia is new, but evolves from Eevee. It's not yet clear how you evolve Ninfia from Eevee - the magazine says there's a secret to it - but the mag could confirm that Ninfia comes in at a meter tall and weighs in at 23.5kg. 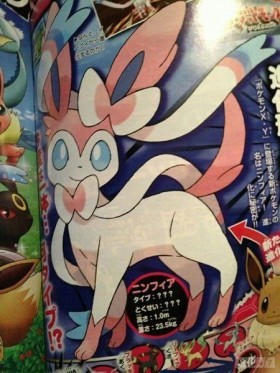 More on Ninfia as we get it.