The management sim is on the up again, but Parkitect might be my favorite game of the genre's revival yet.

This holiday break, I somewhat broke a tradition - I barely spent any time playing video games. Usually vast amounts of the Christmas break are spent sitting in a dressing gown, eating junk food and clearing my backlog - but in 2018, I just... didn't. To be honest, this was because I was knackered: a house move, a new puppy, and a grueling final few months writing about last year's big releases meant all I wanted to do was sleep. It's certainly not like 2018 lacked the games to keep me interested either - and that makes the one game that did manage to capture my attention over the break all the more deserving of praise. It's not even like Parkitect is new - I've had it on Early Access for over a year, but its 'final' release just landed at the end of 2018.

While the management sim genre has had something of a resurgent few years with the likes of Cities Skylines, Two Point Hospital, and fellow amusement park sim Planet Coaster, for my money Parkitect is something truly special even when compared to its closest peers. There's something that Parkitect gets about what made the likes of Theme Park and RollerCoaster Tycoon successful that isn't quite as well expressed in its big-budget rival Planet Coaster. 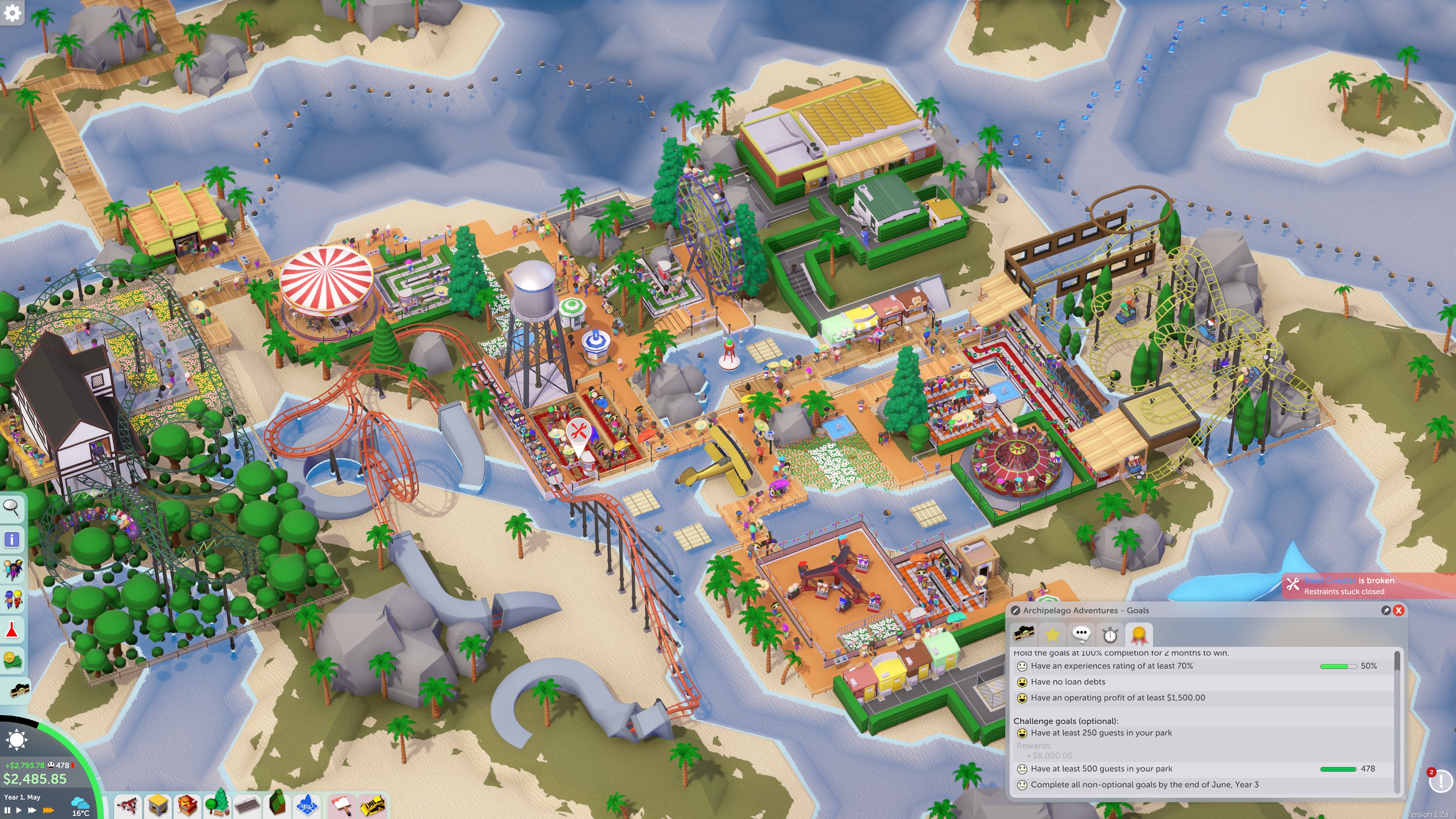 Part of that is perhaps down to the team behind the game, a core of three who started making it simply because they loved the games it emulates. It's devoted to the cause, and part and parcel with that is keeping some aspects of the game simple. It all takes place from an isometric view that can be rotated four ways in locked increments. Aside from a modest zoom, there's no real 'free' camera control here - but that is by design. It allows you to focus on your park's design without worrying about the finer detail of if things actually stitch together properly from an on-the-ground view. The art style is similarly simplistic and charming, but you also shouldn't let that mislead - this is a deep, complex simulation.

I almost feel bad bringing up Planet Coaster again, but given the proximity of these two releases and the shared intentions it'd be silly not to, especially in the context of simulation. It's an easy short-hand. Planet Coaster is a great game that's focused specifically on those titular RollerCoasters - much of its design is geared towards building amazing, twisting coaster designs that you can then survey close-up using an unlocked camera and 'ride' from a first-person perspective as well as drop into your parks. The simulation side of the game beyond coasters always felt like an afterthought, though. The management side of Planet Coaster is its weak spot, and its name is the true clue as to where that game's allegiances are.

Parkitect is more about the park as a whole, then. There are plentiful building options not just for coasters but for park aesthetic in general, and your park guests are constantly judging you on this aspect of your design. These little walking wallets aren't just looking for rides that offer the right amount of excitement or intensity for them - they're also looking to be fed, watered, and entertained as they wander around. That entertainment stat is the thing most revelatory to Parkitect's design, as it encourages you to ensure all aspects of your park are fun - and that leads to some interesting tactical management conundrums. 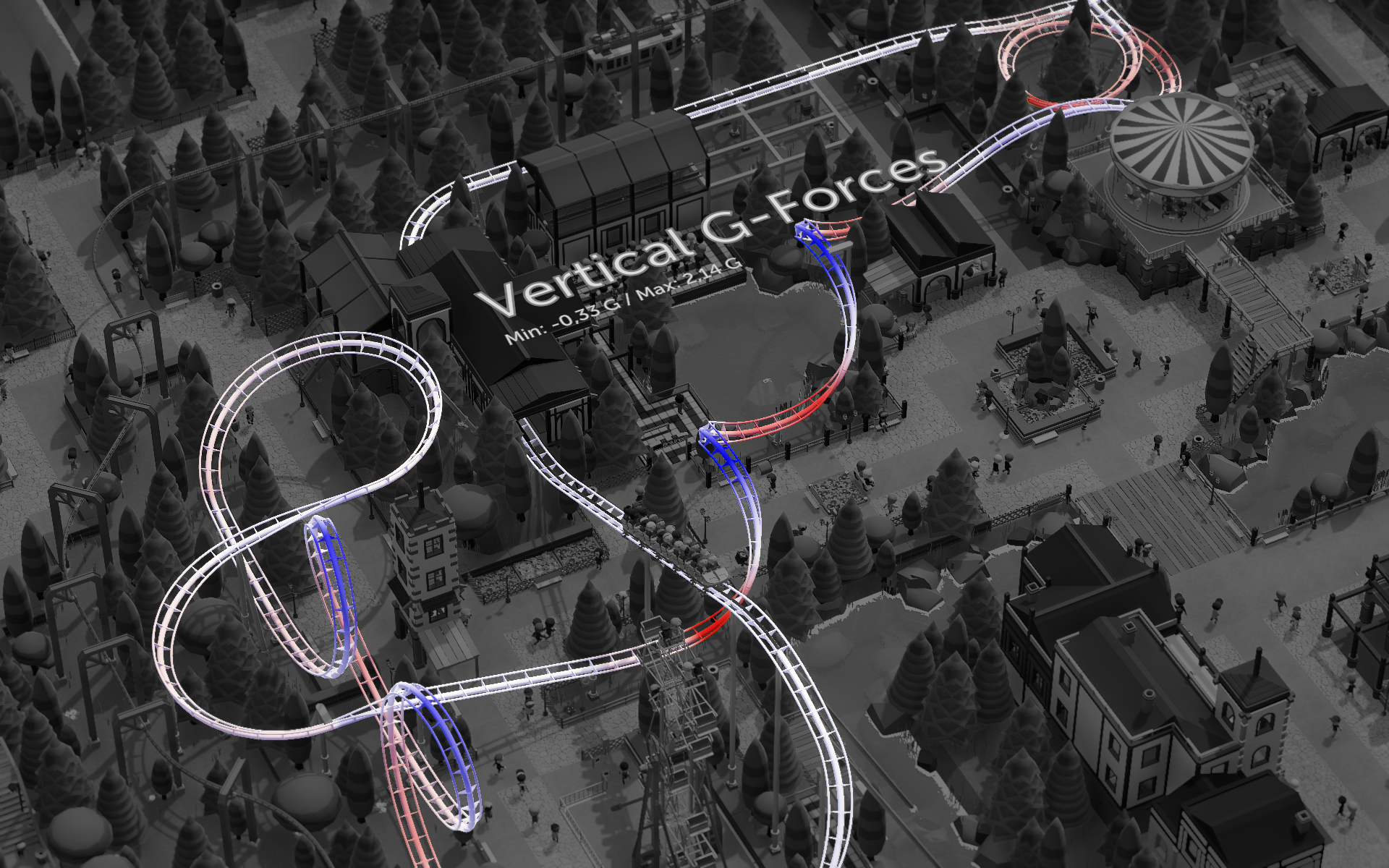 Guests dislike seeing the gears that power the park, for instance. They love food and souvenirs, but they hate seeing workers carrying crates to stock the stores that sell them. That puts a real damper on their moods, and there's nothing worse than a staff member hauling crates right past a packed ride queue, annoying everyone in the process. As such, you're forced to cleverly hide staff-only paths and buildings towards the back of stores, camouflaging them by hiding them underground or placing walls or fences in front of them.

Good rides and solid logistics are one thing, but decoration is also vital. You'll want to theme areas of your park or your park as a whole, building unique outbuildings and other decor out of individual pieces. Parkitect encourages players to take their time to craft good looking parks, and decoration becomes a unique part of the balancing act. Props and other aesthetic additions take up vital room, and the rating of rides is impacted by the decoration they weave in and out of. With park space limited, this all feeds into a tasking simulation that admittedly can be fairly frustrating early on until a proper understanding of the mechanics slots into place.

Once you're more comfortable with things there's a slew of useful tools for tracking your park including a variety of overlays that tell you everything from how pleasing your decoration is to how bad vandalism is. There's even an overlay that highlights which areas of your park are under cover in case it rains - as when it does you'll either need to have umbrellas on sale or have decent coverage to keep people from leaving. These are the sorts of things the simulation wants you to consider. 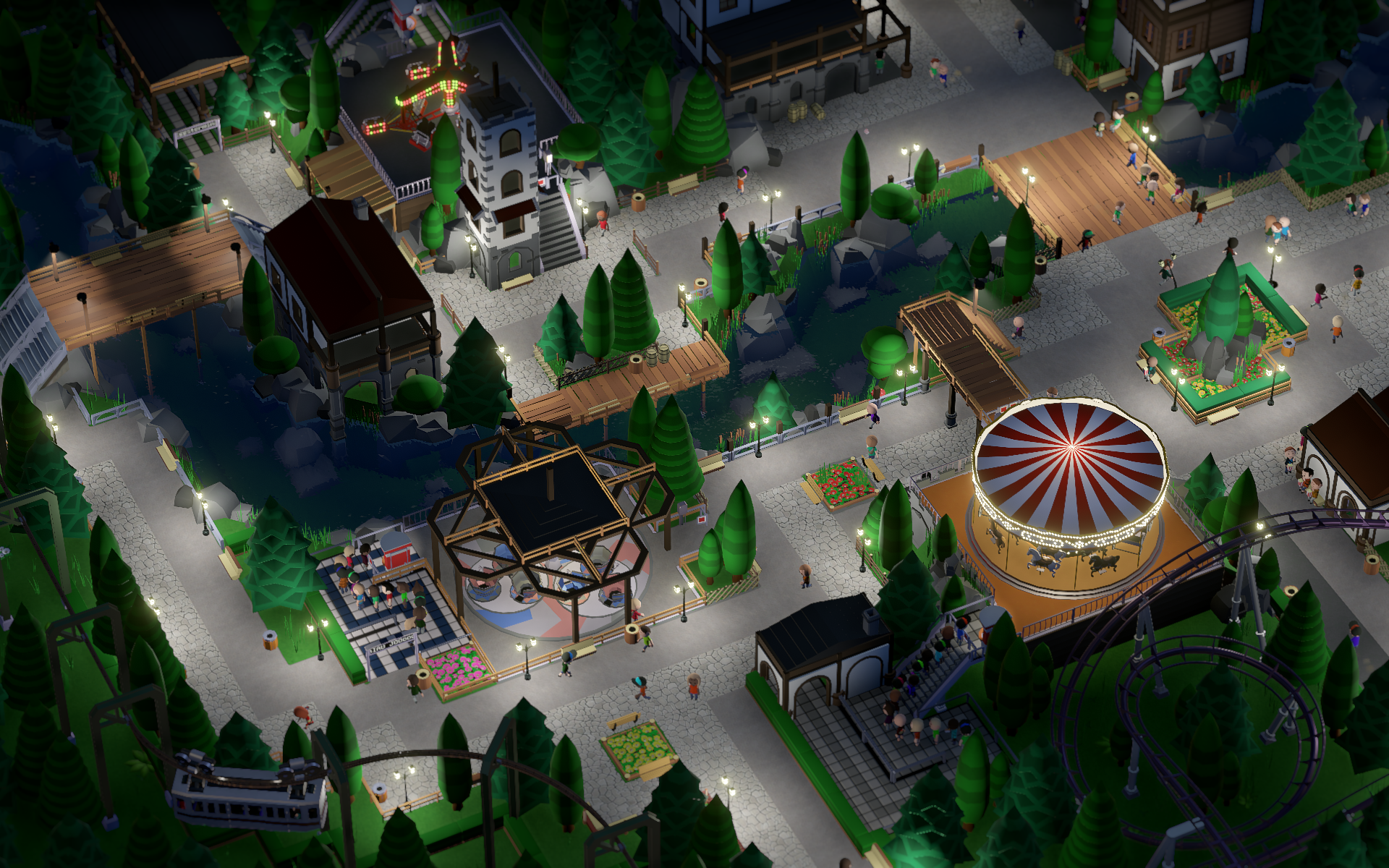 Concepts like worrying about park infrastructure and theme are ones that feel like a natural extension of the mechanics from classic games like RollerCoaster Tycoon that are already well-replicated in Parkitect. It's thanks to these new features that Parkitect carves out its own unique take on the genre. These are small changes, but given that any well-designed simulation game turns into a wonderful, clock-like mechanism of moving parts changing the slightest thing has as significant impact on the whole.

The features you'd expect are there, for the record - there's 26 campaign-style scenario missions that get gradually more difficult and help to teach you what's important in this new simulation, plus a sandbox mode, scenario creator, terrain editor and support for sharing your creations via Steam Workshop. The latter is particularly useful, as it allows more complex designs for rides or even specific park areas to be shared online. If you're the type of player who struggles to make coasters but enjoys the management sim side, you can hop onto the workshop and download creations from other players that you can then drop clean into your park at their native cost. If you're the type who enjoys recreating real-world rides or creating fantastical new ones, you can share your hard work online in the same way. It's good stuff.

Basically, Parkitect is bloody great. Where I struggled to get long-term enjoyment out of Planet Coaster thanks to the thin management sim side of the game, I sank over 20 hours into Parkitect in a very short period of time. There are niggles, like a user interface that trends far more towards the obtuse than it should, but there's much of the magic and charm of those classic simulation games here - and in 2019, that's a difficult thing to capture.