The latest Paper Mario outing is likely to come under fire for not returning to the RPG mechanics that made the series beloved in the first place - but The Origami King is its best outing in some time, nevertheless.

In truth, Paper Mario: The Origami King is sort of a quintessential not-quite-perfect Nintendo experience. It's charming, clever and lovely-looking - but to be honest, it's all just a bit too simple for its own good.

After beginning life as an N64 sequel to the Square-developed Super Mario RPG, the original Paper Mario peeled off in a slightly different direction, mixing role-playing game mechanics with more traditional Mario elements. You're still running around and jumping, but with RPG combat and progression. Since then the series has constantly experimented with the ratio of role-playing systems versus other shades of Mario, but despite that the bar to clear remains the one set by the second Paper Mario title, The Thousand-Year Door on the GameCube.

I have to be clear here: The Origami King is not a role-playing game. Its battles are turn-based, but there's no experience points or leveling up to be found. In fact, each combat encounter in the game is really a little intricate puzzle with an exact and specific best possible solution - but there's a ticking clock that means in more complex encounters you won't always find and execute it in time.

In battle, Mario stands in the middle of the arena with concentric shapes drawn around him; circular lanes, each of which can hold various enemies. Your job is essentially to shift and rotate the columns and rows in front of you to shuffle enemies into larger groups that you can easily execute a special move on, hitting multiple enemies at once and therefore reducing the amount of pain they'll be able to heap on you once it's their turn. It's simple but deceptively fun, especially when you begin to get to grips with the system and work on finding the optimum solution for most enemy layouts and encounters. Sometimes that solution might not occur to you until it's too late, but that's part of the fun - you then have to adapt to the situation your moves create.

Bosses are a little different but still follow the same broad puzzle combat idea, and it all makes sense: with the RPG progression and character growth stripped out, combat has to more aggressively justify its existence. In a typical RPG you grind weaker enemies with basic attacks to level up in order to beat bosses and advance the story; in The Origami King you 'solve' each little puzzling combat encounter to advance. That's the point here, really - this game is wonderful nonsense, brimming with puns, wise cracks and knowing winks at the audience. There's that elusive 'Pixar' quality to the narrative in how it'll be funny for kids but features nods and jokes that'll land better on adults with a deeper knowledge and experience with Mario and friends, which is great.

Plus there's how it looks - The Origami King is utterly gorgeous. Nintendo has become especially good at these 'real material' games in recent years, delivering lookers like Yoshi's Crafted World and indeed the other more recent Paper Mario titles. This game runs with that - you can see the folded seams and corrugated cardboard edges of the world. Where the baddies have stripped some of the paper away, players can glimpse beneath how the shell of the world is held together by wire. It has a truly tangible, real feeling - it makes you want to pick up some tape, paper and cardboard and make your own little paper Mushroom Kingdom.

Great fun is also had with the concept of origami and how the simple act of folding paper becomes nefarious - murderous, even - when the entire world is made of paper. This is where The Origami King excels; it's funny, has a whole lot of heart, and runs with its theme in a way Color Splash, the previous entry, didn't. There's some particularly great boss encounters that play on the idea of what paper's greatest enemies would be in a world where it is sentient.

We have to come back to that criticism, though - which in a sense feels unfair because it's a criticism of a core pillar of The Origami King's design: that this isn't a role-playing game. What you get instead is a fairly breezy experience pushing through puzzles where the perfect solution is satisfying but generally unnecessary to find. It's never truly challenging; health restoratives are everywhere, and combat encounters are easy enough anyway. 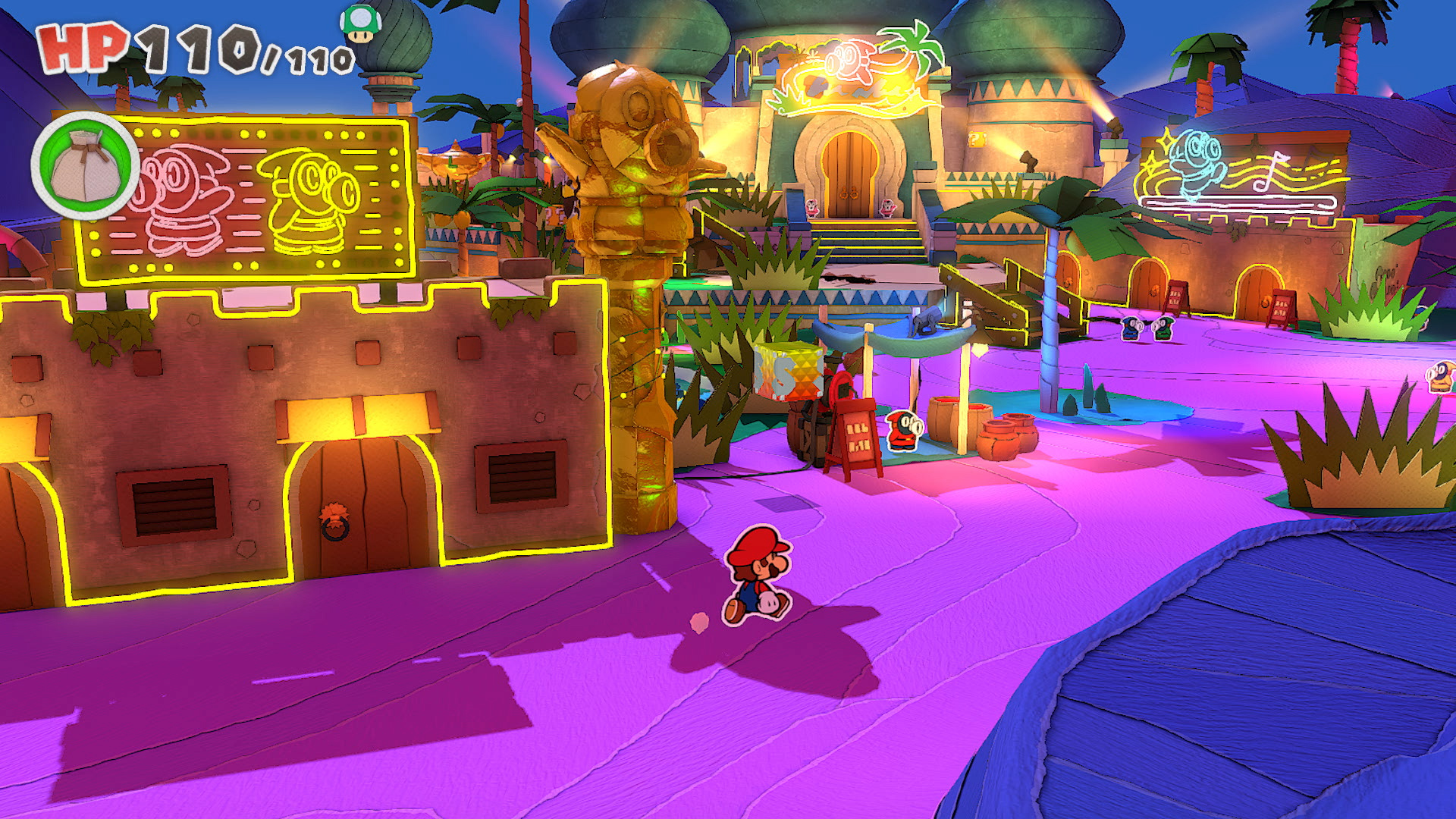 There's a delicate balance here, though. By not being challenging, the puzzling combat encounters never outstay their welcome. You end up playing not so much for the story, but for the atmosphere - for the funny little quips characters make when you rescue them from a crumpled-up state, for the lines clearly written to get a rise out of long-time Nintendo players. It's a fun, cheerful game released at a miserable time - the sort of thing you can partially turn your brain off and coast through, only fully engaging when battles get a bit more challenging - and even then, not much.

That simplicity is overridden by originality and vigor, then - but I also know all too well that some fans of the older Paper Mario games will once again walk away a little disappointed. This is still undoubtedly no Thousand Year Door. Perhaps the next outing can bring back a little of that RPG depth - but regardless of that, this is still the best Paper Mario game in years.

Disclaimer: A review copy was provided by Nintendo.