You're taking on the role as mediator in the Family Feud quest in Mount and Blade 2: Bannerlord, though there are a few bugs you'll need to look out for.

As Mount and Blade 2: Bannerlord is still in early access, some quests are incomplete or are bugging out, which can be frustrating. The conspiracy questline is one such quest and it looks like players are encountering some difficulties with the Family Feud quest, too.

You'll be able to pick this up at random from an NPC during your journey through Caldradia and you'll need to use your big boy words to solve the problem. This quest should be particularly easy if you have a high Charm, though it doesn't guarantee success. The quest revolves around an accidental killing by a younger member of one family, with the scorned party seeking their revenge.

Of course, you could just be a dick and attack the vengeful family, but you're not that kind of person, are you? 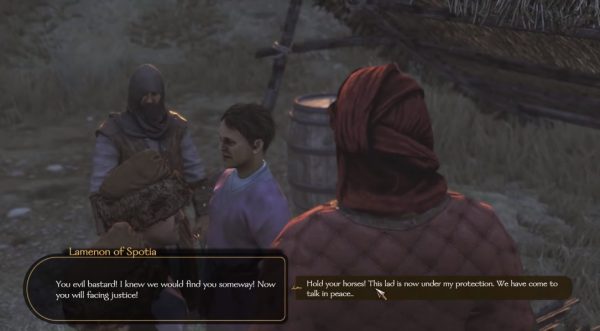 You'll encounter this quest in a random town or city, so just keep your eye out for a quest marker from an NPC. Speak with the family involved in the accident and assure them that you'll try to diffuse the situation. Then, you'll need to head out and approach the family whose family member was killed. They are out for blood and it's your job to convince them otherwise. When you find the town the family are located in, you'll see their representative's icon in the top bar when you click on the town. Select them to begin the mediation.

Speak with them and state that you are here to talk in peace. You'll then be faced with three choices, which lead to three different scenarios:

For the "best" ending - where the quest registers as completed - select the "You're breaking the law" option. The other options lead to you failing the quest, so while it's tempting to kill 'em all, you'll need to rethink your gameplan if you want to keep a perfect run of successful quests. 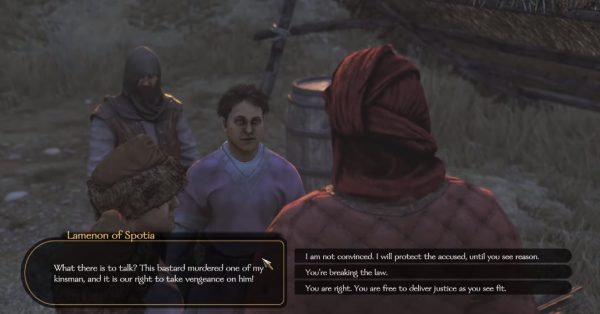 Depending on the skills and perks you have active, you should be able to talk them down from their aggressive stance. You'll need to have high Charm with either Valor, Calculating or Mercy for the next options. You can threaten the angry party that they will be reported if they don't accept the blood money from the accused family, or promise to protect the boy to the death in a bid to scare them off. The third option involves appealing to his common sense, where the cycle of death will continue and innocents will die if he doesn't see reason.

You'll likely receive around 500 Denar for your troubles as well as increased relation with the accused family. If the quest bugs out or you fail despite picking the "best" option, reload before the conversation takes place and try again.

You can check our our Mount and Blade 2: Bannerlord review here, as well as our guides on which culture you should choose, how to improve your Smithing skill, set up a Workshop and find Charcoal, how to capture prisoners, complete the Conspiracy quest and recruit companions and increase your party size.