Some games are, in a cruel twist of developmental fate, born janky, while others, well, they choose jankiness. This later condition is true of the Mount & Blade games: as true for Bannerlord as it was for its predecessors. And, oh my, the apple does not fall far from the tree. I have to admit it’s been a couple of years since I checked in with Bannerlord, and for some reason I was expecting something more polished, and therefore diminished, compared to the original games. But it is not so. That jankiness is a factor of the ridiculous ambition and scope of the game, which tries to do so much that some of what it does can feel a little undercooked. But let no man say I do not love ambition. Mount & Blade 2: Bannerlord is a bold and beautiful slab of purest video game, and it is difficult not to love it.

But what exactly is it, you cry? Ah, well, it’s an RPG, but not an RPG of the templates we are now generally familiar with. Mount & Blade is more mechanistic, more strategic. You create a character and then find yourself dumped into a world where AI factions are plentiful and their machinations enormous. It is not for the Bannerlord the tradition of CGI-linked storylines, and instead you are abroad in an open world, doing whatever you please. There are missions to follow, sure, but they are open-ended to an extreme. Bannerlord is about freeform adventure, and faction-driven AI collisions on a massive scale.

The heart of the game is a real-time map, in which the various factions hold settlements and fortifications, and about which units of soldiers, bandits, and merchants make their way. As a player, you can drive your gang of soldiers about this real-time strategy map (think the main map from the Total War games, only this is all happening in real-time) and visit locations, track enemy units, engage them and so on. When you visit a settlement you can engage with it via menus, allowing you to buy or sell goods, as well as recruit soldiers into your retinue, or you can actually walk about in the settlement and chat with the locals. To talk to a noble, or a merchant, or a eligible friend, you do so in person, in an often absurd or buggy 3D chat-o-scene. And there are so, so many NPCs in here. It’s almost like Taleworlds were trying to populate an actual world.

This later part does, perhaps because of the ludicrousness of that ambition, feel a little empty. You have to find and then pay attention to the characters who actually have something for you to do (you can shortcut to them, fortunately) and while I understand that being able to drive your horse around in every settlement on the map is a critical part of the Mount & Blade template, it does feel somewhat redundant. There is little to do in there that could not have been another menu. It’s nice, but clunky and basically fluffy compared to almost everything else in the game. Hell, they let you do a good part of the romancing and marrying in a menu in Bannerlord, so there’s really no reason for this bit to exist, other than it looks nice and, hey, there’s your immersion. 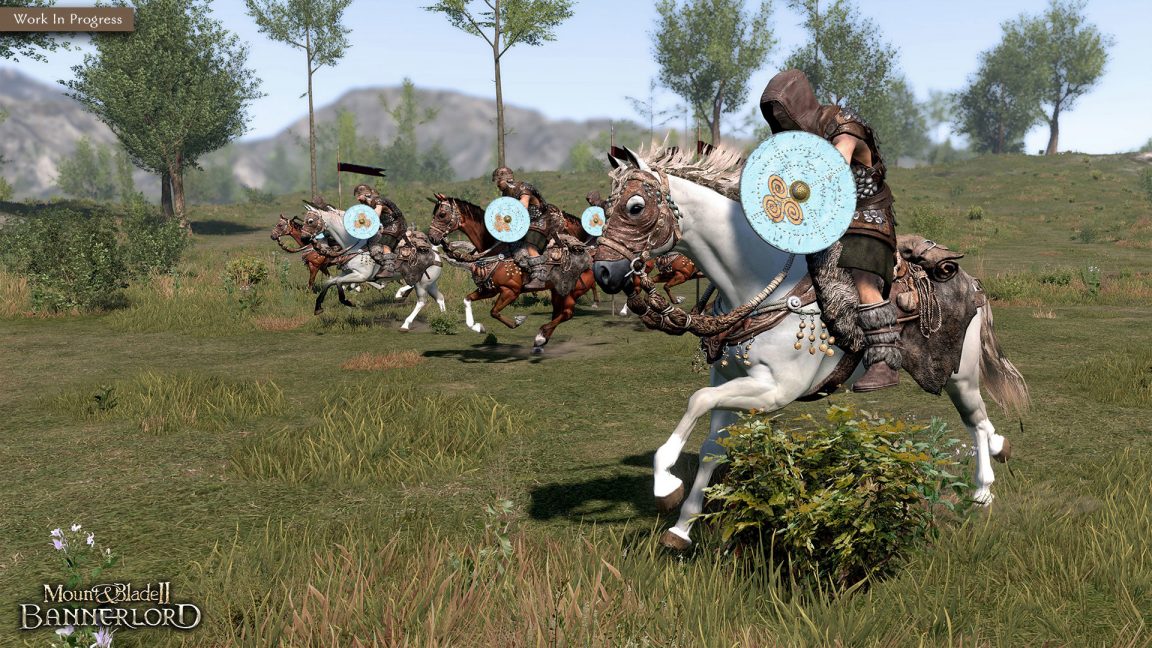 But there is also BATTLE. In this part of the game you are once again driving your horse about in person (or running about on foot, if you’re insane) and fighting in real time against the enemies you have encountered. The battle maps are generated based on the location on the strategy map that you’re having the fight - so you’ll see wooded river valleys, open plains, villages, and sprawling fortresses - as well as the enemy you encounter. Needless to say, initial skirmishes see you and a dozen haphazardly-armed men butchering a gang of bearded bandits dressed in rags, but things soon escalate, and before long you are butchering (or indeed being butchered by) much larger gangs of bearded bandits, sometimes with real weapons or armour. Then later: fighting gigantic pitched battles with cavalry, ranks of archers, and crazed knights dressed in plate armour. The scope here is terrifying. Breath-taking. Let me just go gather up some more superlatives, because it really is a thing.

Anyway, you play as the leader of your warband, and as such combat involves you blundering into combat with a mixture of both your own natural skill with the various weapons at your disposal (I like a long spear/lance to poke people from my horsetop), but also a function of the skill points you’ve spent on your surly battle-boss, as well as the garments he has usually looted from the dead of others on the field. It can be savagely dangerous, because you are personally fighting as well as using a bunch of hotkey commands to get your collected AI-friends do their best fighting on the field. This is a simulation, too, so thinking about things like taking the high ground actually matter. Most fights do end up on a massive melee brawl at the end, but initial moments of charges and volleys of missiles do, like in real historical battles, often decide how things are going to play out. Particularly if you yourself take an arrow to the knee.

This massive chaotic recipe spills out into the multiplayer games too, where huge teams of players and bots can slaughter each other in the courtyards of fine European castles pretty much indefinitely. It doesn’t look as impressive as, say, For Honor, but it’s a huge, hilarious, and chaotic mega-brawl nonetheless. The range of weapons and armour is History Nerd heaven, despite this being a made up history of vaguely-analogous to real world Eurasian factions. 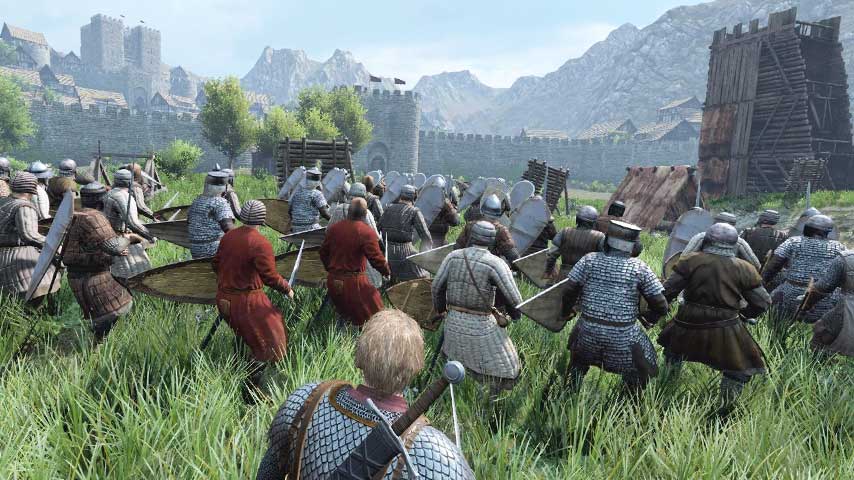 Yes, the setting is a sort of non-fantasy, but fictional, Eurasian medieval times, in which bearded men stare fiercely at each other before chopping off heads with huge curved scimitars. (You can, at points, choose whether or not to duel enemy leaders, which will improve your reputation if you do it, however letting your mob rip them to pieces is almost always funnier.)

The factions are all constantly doing their own thing on the strategic map, and that often ends up crossing paths with your own plans. These AI buggers are fighting wars! And after enough play you end up seeing which faction is getting the upper hand across the continent. And if that’s not your faction, that can be daunting, and thrilling. This is all a simulation, too, so games of Bannerlord play out to their own internal dice-rolls, not to any pre-ordained plot. This alone is a reason to be in awe of what Bannerlord as accomplished.

And I feel obliged, at this point, to point out that due to some (possibly accidental debug) fluke of design, you can play as a tiny child.

That sort of represents Bannerlord, for me. 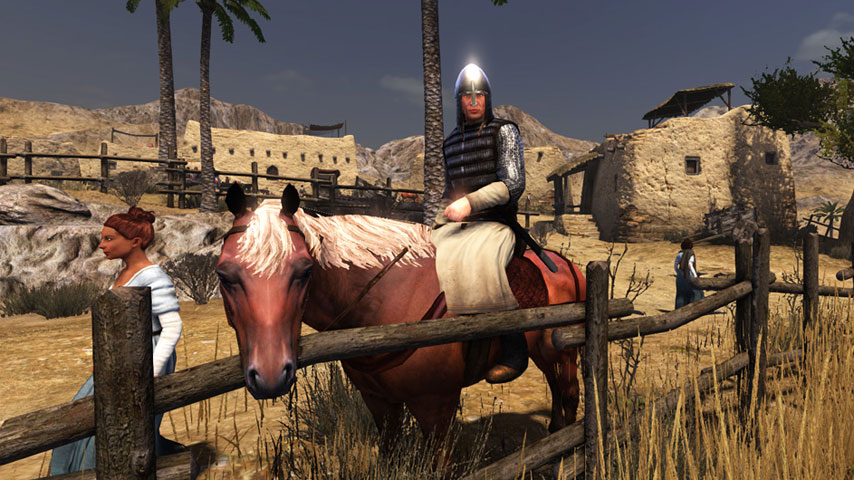 (Also, as a complete aside, I feel like the excellent Battle Brothers showed us a thing or two about how these real-time strategy maps can be improved, although that does not have Bannerlord’s fidelity or war-led scope.)

Those issues, though, what of them? Look, it has bugs and there are bits of the game which feel underdeveloped, and some of them will probably be like that forever, but hey, this is a massive thing, it’s still early access (after eight years of development!) but whether or not you can overlook these to glimpse the vistas of ambition beyond will largely determine whether you can get serious mileage out of Bannerlord. If you don’t mind jank in exchange for some real meat, then I think you might get on here. I mean, you know what sort of game heats your oven, don’t you?

What’s more is that Bannerlord, like its predecessors, will be broadly open to modding, with the core game functions being loaded as mods themselves. It’s going to be a toolkit for the visionary, and I am so very excited to see a big game setting forth into that terrain so deliberately in 2020. 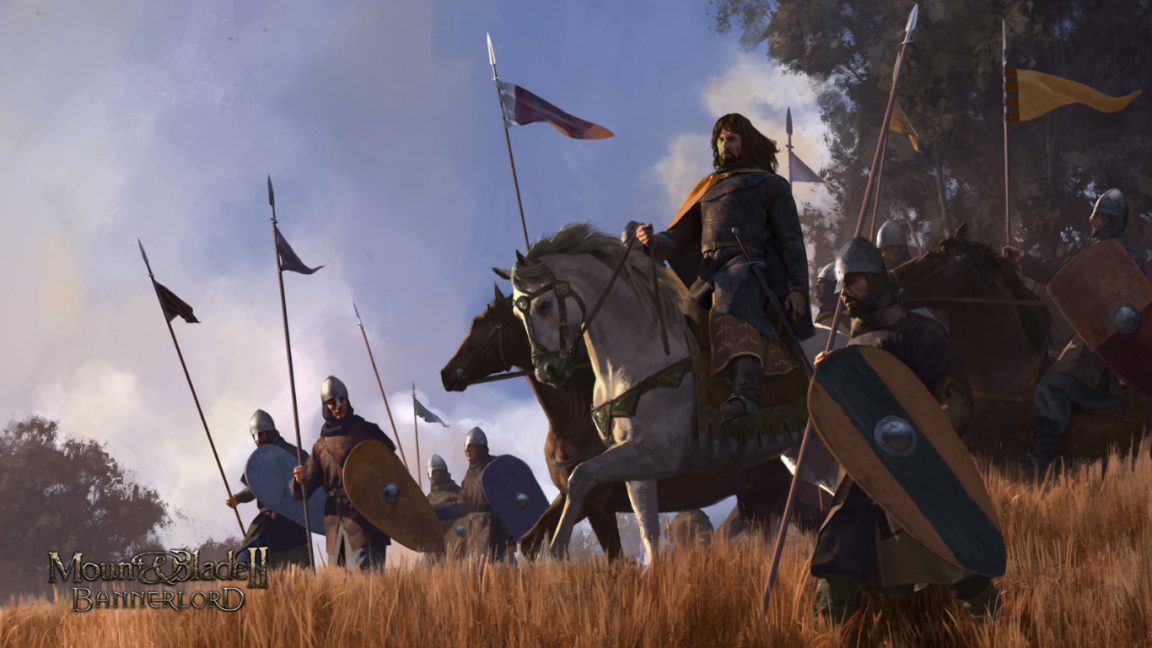 So should I play it, Lord Rossignol? Well mate, maybe. Your mileage will vary. I think as a purely combat game Bannerlord doesn’t compare particularly well to Mordhau and others, but it is not really just a combat game. As an RPG it feels fairly unsteady to the point of being faintly comedic, but the scope of what you can do is so broad that it’s hard not to get lost in it almost immediately. It’s perhaps hard to see how the multiplayer will sustain itself when the competition is so fierce. But Bannerlord is much more than those titles: it is a single and multiplayer game of enormity, with sieges, vast pitched battles, endless conversations with angry men in beards and pointy hats, and entire kingdoms banging on each other’s shields. Not only that but it is a huge journey of a thing. You start out with a few men who are trying to stab a pitchfork in the eye of local bandits, and end up clad in shining armour, face to face with the gleaming horde of your arch-nemesis warlord. And you do it not by plunging through some clever-clogs’ fairly linear story, as we have come to expect from RPGs, but by pulling the levers of this janky pocket universe to create your own tale. There’s something vital about that.

Friends, let us conclude. Bannerlord is one of those games which is more than the sum of its parts. Any individual chunk of Mount & Blade 2 has a parallel in some other game which does it better. Many parts of it feel clumsy, the character creation and development is a bit crude, and way better sword and spear melee combat systems already exist. But what is here works well enough to carry the whole. And what a whole that is, and will be. I suspect Bannerlord, after nearly a decade of development, is just getting started.