Watching the reaction to the latest trailer for The Last of Us Part 2 unfold, I wondered why everyone was so upset by its barbarity.

Violence has been an intrinsic part of video games ever since their conception because most games, at their core, are about beating someone else, whether that is the AI or another player. This often involves shooting someone. Usually in the head.

Plenty of games put physical conflict at their core. In fact, many reward you for murder, for killing stylishly. Rack up that combo meter with slick, consecutive kills. String the murders together, boot them into spikes, pop a head from 500 metres, and upload your skills to YouTube so the world can see how cool you are.

In the trailer for The Last of Us Part 2, we see someone stabbed in the neck and watch blood piss out of the gaping wound. We see heroine Ellie jam a pick into someone’s forehead. We see a man strung up on a tree before being disemboweled, his guts hanging out like a bloodied tapeworm.

It’s shockingly brutal and you can’t help but wince at what you’re seeing, but that is entirely the point.

I think the reason it has seen so much pushback is this: we are so used to seeing incentivised violence in video games - killing for points - that we are shocked when we see dirty, grounded violence. Violence for survival, rather than rewards. Violence as a necessity.

The violence depicted in The Last of Us has always been shocking. It is meant to give you whiplash, to put you on edge. You can even see this ethos in how your enemies behave, where the strongest infected can kill you instantly, and brutally, as soon as they make contact with you. Joel’s jaw being ripped off by a bloater is seared into my mind’s eye like a second-hand trauma.

In the first game, you were constantly being reminded that you were not the main character. You were just a passenger in the story of Joel, a man who lost everything 20 years ago and somehow survived in this world for two decades afterwards. He constantly rubs up against your decisions and does things you wouldn’t, because you are playing as a character - a very violent one with a violent past. Now think about all the things Ellie saw in that journey. Do you think she wouldn’t be just as brutal? 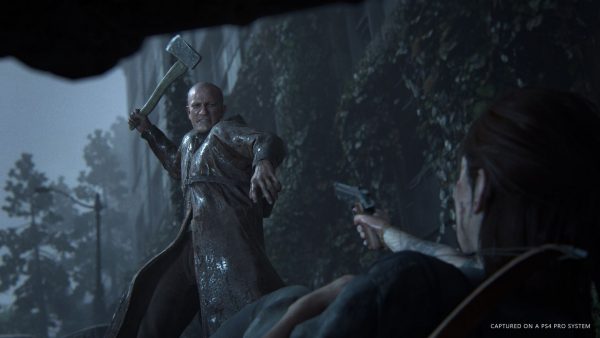 The Last of Us Part 2 shows us an Ellie five years older, living a relatively normal life in Jackson, Wyoming. “Like in the first game, Ellie wonders about what teenagers had to deal with,” lead game designer Richard Cambier told me during E3. “You get to see her have a bit of a normal teenage life. Yeah, the next morning she has to go on patrol, so it’s still that world, but they have power, they have movie nights, they have a community dance - we want to show a bit of what that life is like. Then obviously that is going to get disrupted.”

Ellie’s reaction to that disruption will obviously be savage.

We have become desensitised to a certain type of violence and it isn’t the one that turns your stomach - it is the one that gives you a pat on the back for a grisly job well done. All of this was prophesied in 2003 with the release of Manhunt, Rockstar’s video nasty. In that game, you only needed to kill for survival. But, if you wanted to, you could delay your kills, holding down the button and risking discovery so you could do a nastier, grubbier, more violent kill - all of it on display through the static of a mock security camera. The only reward for doing this was a higher rating at the end of each level. You killed the person in a more brutal fashion? Well done - have a gold star.

I always felt like Manhunt was a comment on video game violence, encouraging us through simple feedback systems to commit horrific acts for the pleasure of a virtual director. That director was meant to be us, the detached participant. Looking back on it now, it seems tame in comparison to modern games, yet most games still reward the kill. The only reward in The Last of Us is a short respite from the horror. If you are appalled by the violence in the trailers, good - you’re meant to be. We have it all mixed up.