A few weeks ago, I wrote about not always loving multiplayer games when you don’t have close friends. It’s an incredibly lonely experience.

It’s a bit like eating in a fancy restaurant alone. You know it’s okay; nobody cares you’re doing it. But it still sucks when the guy with the violin comes by your table and stares you down as he plays. This may have actually happened to me.

Well, let’s back up. Kind Words isn’t even really much of a “game” outside of a few minor collectibles. It’s a simple, limited experience. The plus side is it means you can get it on Steam for five American dollars and, I dunno, ten pence and a quid in England? Are those money terms or just what Victorian orphans say?

Kind Words is a bit like Animal Crossing if you only wrote letters. Except instead of animals demanding you write them random words in exchange for a cabinet, you’re actually responding to real (anonymous) humans posting real problems. You can also post your own (anonymous) problems, or send a random (anonymous) message out into the air that other (anonymous) players can see. 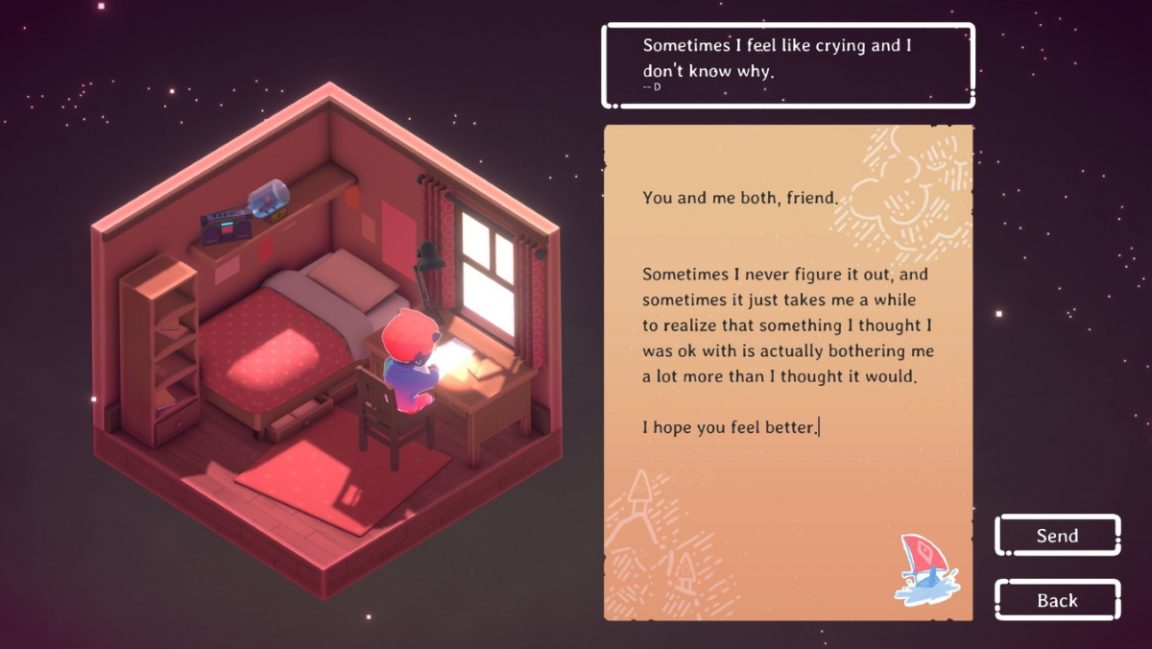 Before you ask, no, I’ve got no idea how it hasn’t been ruined by trolls. Maybe they’re on their way. Or maybe the fact that the game has a super robust reporting system keeps people from harassing folks. The anonymous nature of the game (and the fact that only you can see responses to you) might also limit the inclination to show off being an asshole. Who knows.

I bought the game on recommendation of writer and friend to the people, Gary Whitta. I trust Gary. I also know how little time Gary has, so when he recommends a game, I’m always excited that it’s probably short and requires little commitment. Look, you make a game I can beat in two hours, and I’ll pay you for it and then never complete it anyway.

Then you get responses. Little letters that come in. People saying nice things like, “Keep going,” or “The issue you’re facing is hard,” or “Your dad isn’t disappointed you just lost an Emmy even if he said he’s disappointed you just lost an Emmy.” I didn’t post a question about that last one, but let’s humble brag while we can humble brag, folks.

The game wraps this all up in a very Animal Crossing aesthetic. You’re a genderless figure sitting in a nice, warmly-lit apartment bedroom. Your mail is delivered to you by a very polite deer. The deer recommends new, atmospheric music that plays while you write. Letters are sent with little collectible stickers that have no actual effect on the “game” itself, but are nice to have.

This all ties together to make such a calm, relaxing experience. It’s a morning coffee, a little meditation, a tiny bit of time for yourself. It feels productive to give advice to people, to tell someone that school doesn’t last forever and you can make it another day.

Maybe this plays into our mass narcissism. After all, you’re feeling great about yourself by giving unqualified advice to random people. And you’re posting about your problems and waiting for those same random people to tell you how great you are. But if it is narcissism, it’s narcissism with a non-toxic box around it that makes you want to try to be better or, at least for a moment, not be a total piece of shit.

And I get it. Kind Words isn’t the only online experience where you can feel good about yourself. Many people meet their best friends through multiplayer games. Discord channels and forums and streams connect lots of people together. They become a community that support and uplift each other with the foundation of common interests.

Unfortunately, as the kids say, that ain’t me.

Kind Words is something in between an art project and a game. It feels like a pared down, but interactive version of that old site Post Secrets. It’s relieving to hear you’re not alone from a stranger - especially because you’re also a stranger. There’s none of the weight of posting publicly on social media. You don’t get a creepy message from someone you knew in elementary school asking if you’re okay and then trying to push their MLM products on you. Nobody has to respond to you like they do in real life, which makes the honest, caring responses feel all the more real. 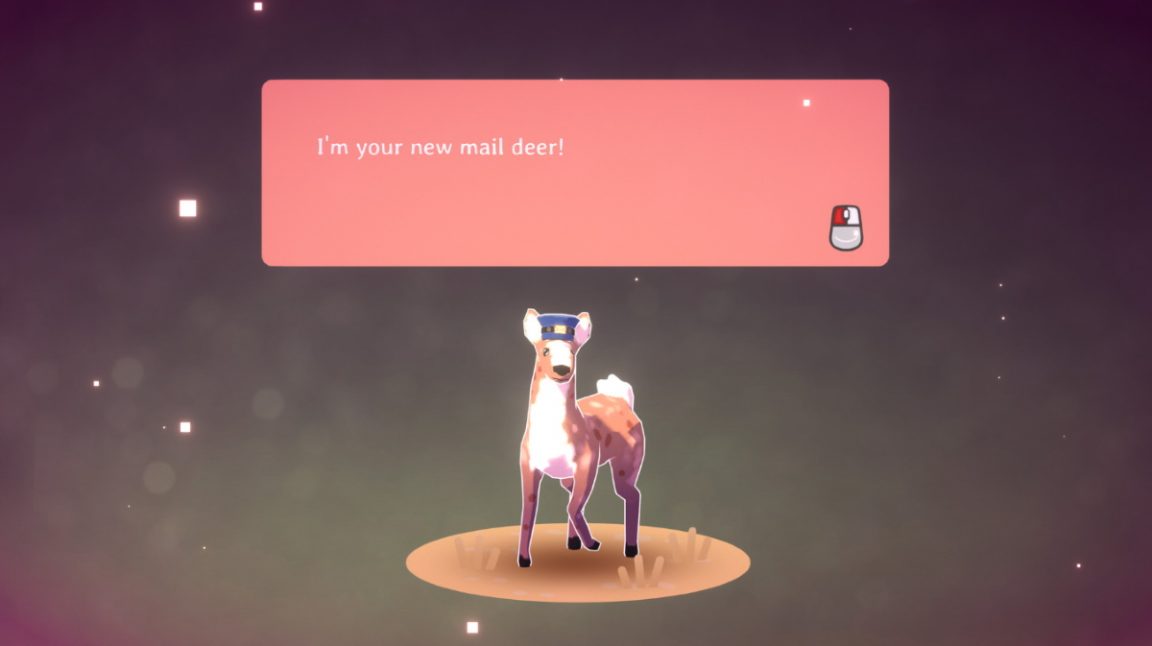 The world is a shitty place right now. It sucks. Everything sucks. I contribute daily to that suckage with a Twitter account that’s mostly, “I hate what’s happening in the world” and “I’m a hyperbolic, bad faith piece of shit.” If you came to this piece from my Twitter account, I’m so sorry. You were right to mute me after this.

And like I said, it’s not a good game by any standards. There’s no plot, no challenges to overcome, no sandbox to play in, no meta game, no secrets to discover, no characters to manage. And if you’re averse to the aesthetic of indie games, you’re gonna have a real bad time here. It’s cute and fluffy. It wants you to feel nice by throwing as much sugar at you as it can.

But it’s nice to have a game that’s just, well, nice. It feels good that its only purpose is to tell other people they’re going to be okay. Without all the bullshit wrapping paper, Kind Words makes everything about these base connections.

Sure, those connections are brief and anonymous, but they feel more honest than anything I’ve ever played before (which I recognize is an invitation for others to yell at me that I missed another game that does the exact same thing but better).

This isn’t a review; I don’t review games. I don’t care to. I honestly don’t care if Tom Clancy’s Who Gives a Shit: Advanced Whatever the Fuck gets a 7.9 or an 8.2. But, as you can see, the cynicism and negativity buried at the core of my being washes away when I open the game.

Kind Words feels like I’m actually doing something good for the world.

It’s possible it’s just an illusion, but it’s an illusion that feels better for my dumb brain than almost anything I’ve played this year.