One of my biggest annoyances in life has always been the arbitrary nature of fitness goals. Log into any app and the first thing it always asks you is:

Why are these the only options? In the whole fitness world those are the best incentives we have? Why isn’t it ever: ‘what kind of fit-as-heck badass do you want to be?’

That’s a much better question to have answered.

Ever since seeing Linda Hamilton’s arms doing pull ups on an upturned bed, I’ve dreamed of being like characters I see on screen. And whilst fitness mags give you the promise of being like Thor, the focus is always on the size and henchness rather than actually emulating them for a taste of a Thor-like body reality.

I always wondered why they never factored in more of the character - why aren’t there more hammer wielding-related moves? Hammer curls, anyone? Giant plyometric SuperHero Landings? Or cape twirling? OK, well maybe not the last one. 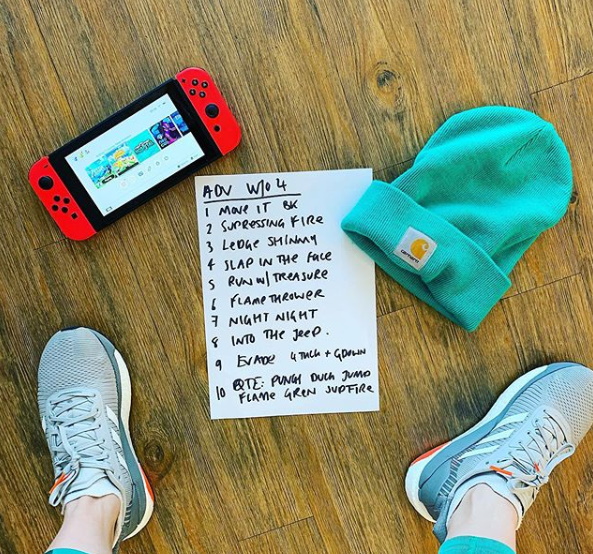 If I am inspired by a character, wouldn’t I want to feel and move my body to be more like them, or even adopt some of their characteristics in real life if I could?

This is a question I’ve been thinking about a lot over the years, and with my love of gaming some seeds were planted early on that didn’t really grow into anything useful until I found my passion for fitness too.

I was not someone who ever exercised - not even a little bit. But when it finally happened, it began with home workouts. I was ashamed to go to the gym. After a lifetime of smoking and drinking every weekend, I got really out of breath when I worked out. Full on red face, dripping with sweat panting. It was not cute. I found that working out at home was great for building my confidence.

My first experience was Jillian Michaels’ 30-Day Shred. I realise it all sounds kinda hokey and like a Lycra nightmare, but the premise was great. Work out for 20 minutes a day for thirty days. Everyone can find 20 minutes a day and I committed to it and completed the thirty days to find my whole perspective around fitness changed forever. It was the power of committing to a programme and knowing I had no excuse, as it was only 20 minutes. I told myself, just do it for a month and then you can quit. And by the time the end of the month came, I stopped. But I found out that I missed it. My body felt so different and mentally I felt less happy. My brain knew that if I worked out, I felt good. And from that, it made it an easy habit to follow.

As someone who has had it all; depression, anxiety, an annoying habit of twitching my leg under pub tables - you name it - exercise has been something that has turned my life around. I have tried to evangelise as best I can about it to my friends and family, much to their annoyance of me thrusting fitness DVDs into their hands and saying, ‘it’ll change your life’ only to have them returned slightly dusty and with coffee cup stains on them.

The home workout was such a powerful life-changing moment. I knew I always wanted to find a way of helping other people find that passion for fitness as I had.

Game To Train wasn’t even a slightly formed idea in my mind until the Xbox One was launched (yes that’s how long I’ve been pondering this). Xbox had its Kinect fitness idea (which I still think was great) and if you remember the posters, they had Lara Croft and Master Chief on them, among others. I thought: why not have a Lara Croft workout or a Master Chief one? I would love to feel like a badass like these characters, and I know gamers would love it if there could be character workouts. I mean, we spend our whole time playing as these characters we love, so why wouldn’t we want to bring a little of that magic into our real lives?

I started to wonder why hadn’t there been successful fitness programmes based around character types. The more I thought about it, the more obvious an idea it felt. There have been a few that have touched upon it, but none of them make you feel like the character. I mean, each character is different; from a Drake/Croft-like adventurer to an assassin, to a super soldier. All these represent different disciplines of fitness and all have very different motivations and thoughts behind their working out.

Skip forward a whole bunch of time. Cos. Life.

Last year I had been talking more and more about it and got fed up with myself so I set myself the task of making it happen. Cue getting up at 6:30am every day and working on it bit by bit.

Live crews fave move of todays workout . Really to do the move properly you need to do it in a Cyril Figgis voice ? Back live again tomorrow at 8am and all week ??? @gametotrain

I was hosting X020 for Xbox in London a few months after that, so I set myself the target of making a mock up Instagram page with all the workouts on there to show Phil Spencer, since I knew we’d be hanging out backstage at some point. That deadline lit a huge fire under me. So by four months later, I had designed workouts for The Adventurer, The Assassin, The Super Soldier, and The Knight, plus got them shot, edited, with their layouts designed and uploaded them to the page.

For each of the workouts, I created bespoke moves for the characters from playing the games and watching videos on how they move. Plus, naming them appropriate or silly things for my own amusement. The idea being that if you can imagine why you’re doing the move, you’ll do it for longer as you can see the potential real-life benefit. I mean, go ahead and do a bunch of burpees. It’s hard to stay motivated to do those tough moves when the motivation is just ‘do it for 30 seconds’.

To give you an idea of the kinds of things I am talking about, here are a few of my faves.

From the Adventurer, ‘Grenade!’. This starts with fast feet running on the spot and then when ‘Grenade!’ is shouted you just run off as fast as you can. It’s very silly, but very fun.

From the Knight workout, ‘Over Encumbered’. This begins with a very low squat walking forward with your arms out like you’re carrying too much stuff (we’ve all been there).

From the Assassin, ‘Roof Jumps’. This key move involves long squat jumps and a 180 twist. But even more fun is the simply-titled ‘Kick ‘em Off The Ledge’, which even when there isn’t anyone there to kick is oddly cathartic after a hard day.

From the Super Soldier, ‘Gun Crunch’ has you lie on the floor and imagine you’re holding a large gun to the sky. Then you try to sit up whilst holding the ‘gun’ aloft. That one is tough! I also really like ‘Ground Pound’ from that set too. Yep just how you imagine it, it’s very satisfying.

My fave move from today’s first workout- GRENADE! . Whilst you do need a little space to do this - sub the run off for a high star jump and it’s just as effective (if not a bit more so) . Sometimes as an Adventurer it’s about getting the fkkk outta there ASAP ?

Not only does each character have specific moves, the structure of the moves is different depending on the character. For example, for the Super Soldier or Knight you’d be expected to have better endurance in general, rather than, say, an assassin who does small, short bursts of light, speedy work. Each type also has different personality traits which is something I wanted to bring into the world outside the workouts. For the first test group I did a 30-Day Adventurer challenge and alongside the workouts I created ‘Side Quests’ to perform in daily life to make them more like Nathan and Lara. The idea is to push out of their comfort zone in real life so that they can be more confident and more like the characters they love.

I could go on and on talking about this, but perhaps the best thing is if you see it in action. I hadn’t planned on releasing all the full workouts just yet, (I just had my first testing team complete a 30 day Adventurer challenge recently), but in light of everyone being stuck at home at the moment I think giving people some fun workouts that we can all enjoy and hangout while doing is a small thing I can do to keep people sane. So every day I’m going to be live streaming a different workout every morning. Initially just on Instagram live, but I might try and do some on YouTube or Twitch after I get the first couple weeks out of the way.

I know anxiety is at a high-level right now, so having a morning hangout where we can chill out together, have a chat, and then do some fun exercise every day is something positive I can put out into the world. Even if people don’t want to hang out but want to just have somewhere to go and relax – all are welcome!

I’ve had so much fun coming up with moves and figuring out the workouts and the feedback from my first test group has been incredibly positive, so I am really keen to release it into the world and see what everyone makes of it all.

To watch the workouts simply add the Instagram page: Game to Train.

We’ll be live every day at 8am GMT.