Wastelanders adds human NPCs to Fallout 76 for the first time and much like Fallout 4, there's the option to get down and dirty with some of them.

Settlers, Raiders and various other groups have reached Appalachia in Fallout 76 and for the first time, you'll be able to recruit allies to your camp. You'll only be able to have one ally present in your camp at a time, though - this isn't a big settlement building excursion like in Fallout 4.

Alongside some potential romantic leads, you'll be able to interact with various NPCs who'll offer you daily quests and unique dialogue. There are likely to be more allies added over the next few months, so we'll update this list as we find them. 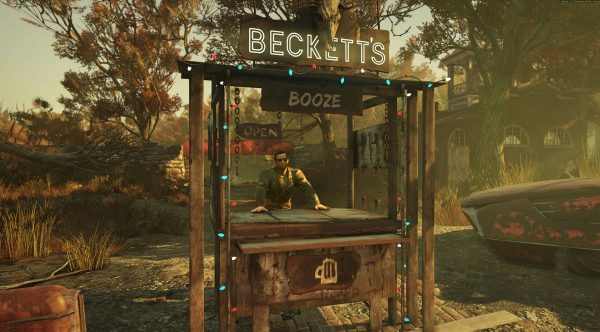 Fallout 76 Wastelanders: How to recruit Allies

To recruit a new ally, you'll need to speak with them and prove yourself worthy, either by rescuing them or completing a quest for them. After you've persuaded them you're one of the good guys, they'll offer you up daily quests and there's a chance you can recruit them to join your camp. Only one ally can be at your camp at any given time, but you can rotate through them easily enough.

Some allies can only be met by completing special quests, like Beckett and Sofia. You'll be able to do a special mission, similar to the ones you faced in Fallout 4, that will allow you to pursue a deeper relationship with your new friend. They'll stay at your camp and will offer you new missions to earn some additional XP and loot. Having an ally around provides obvious defence bonuses, as they'll be there even when you aren't to defend your beloved base.

Sharp-eyed Wastelanders will have discovered that one of the final trophies/ achievements for the game revolves around completing Sofia Daguerre and Beckett's stories, so we'll focus on them first. There will be plenty of other allies to recruit as the story progresses, including an unlikely friendship with a Raider Punk.

The only downside to the allies is missions is that you must be a minimum of Level 20 to recruit Beckett and Sofia, though Level 22 - 25 would be better for the latter as some of the enemies are quite challenging. Keep on doing public events and other NPC missions until you hit that level.

The good news is they are both essential characters and seem immune to death. Their stories are set to continue for a while longer after the initial recruitment to your camp, so don't fret if the achievement doesn't pop up right away after you rescue them.

Where to find Beckett

When you reach Level 20, hang around the West of the map near Ash Heap and you'll receive a radio request to help Beckett out of prison. He's holed up at the Rollins Labour Camp which is the prison area for the Blood Eagles, which you can find in the southwest of the map near Uncanny Caverns. 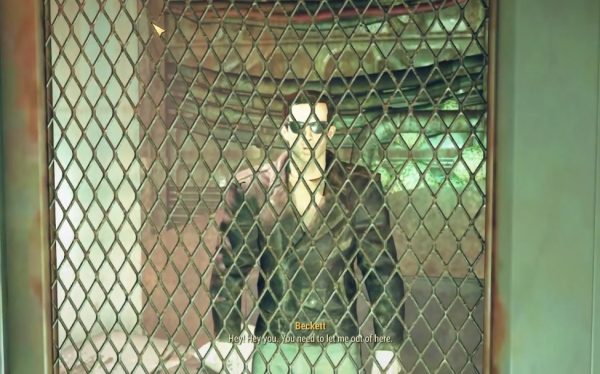 Head inside and take care of any enemies before heading over to speak to Beckett. You'll discover that you need a key to free him and he'll readily tell you where it's located. You can find it on the third floor hidden within a crate, so you can either systematically take out any enemies in your way or sneak your way up. As this is a public area, some enemies may scale up with higher levelled players nearby, so just be wary of who you pick a fight with. 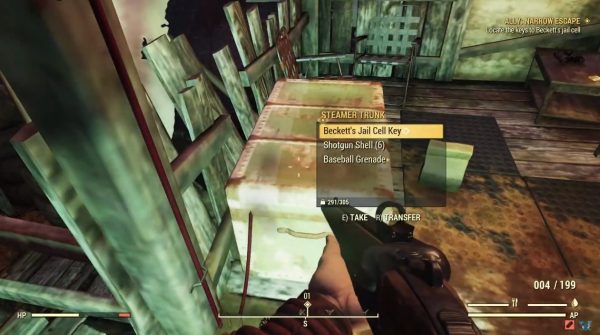 Grab the key and head back to Beckett's cell to free him and he'll ask you to help him retrieve his gear. His stuff can be found at the Sludgeworks, which is to the south of the prison. There are a few Blood Eagles to take care of before reaching a small shack where Beckett's items are located.

After all that is done, head back to your camp and have a word with Beckett, who'll thank you by setting up his bar. You can now complete quests for him and trade with him. 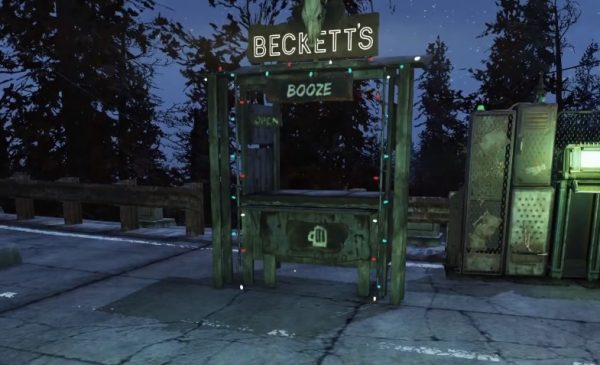 Where to find Commander Sofia Daguerre

To get started with this mission, head over to the Mire, turn on your radio and listen out of a distress call. You'll need to be at least level 20 to begin the quest, but it would be a good idea to wait until around the Level 25 mark so you can recruit her.

The radio signal will point you to East Ridge Lookout in the Mire, and you'll need to scale down a cliff to find the Abandoned Bunker. Head inside and seek out Sofia, who you'll discover is an astronaut therefore unaware of the recent nuclear war. You can offer her a Stimpack or decline before asking her to clarify what she means by the United States Space Administration. 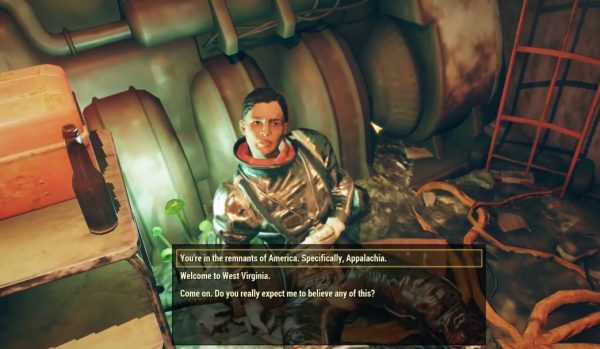 She'll chat for a bit before you need to break the news that she's in Appalachia - or what's left of it. You can ask her what year she thinks it is and she replies somewhere roughly between 2075 and 2080 after being put into a deep sleeper pod in 2070. Unfortunately, the year now is 2103, meaning that she's been in deep sleep for much longer than intended and has missed the war completely.

After this realisation, she asks you to help her find her crew and find her ship, which is west of Gulper Lagoon. You'll need to find the ship's flight recorder which is easy enough. The hard part is waiting for the data to download as you'll need to face off a few enemies including Super Mutants if you're a high enough level. If your sneak is high enough you might be able to stay hidden within the ship but if not, prepare for a fight. 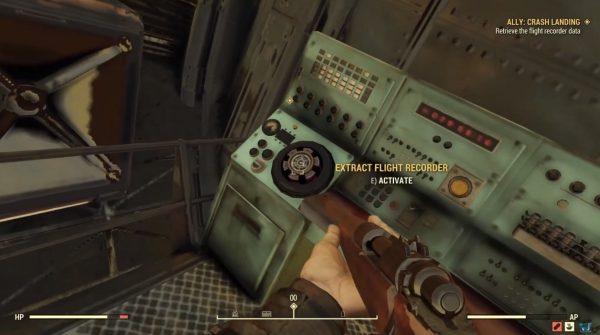 Return to Sofia and she'll ask you to decrypt the data using a robot. If you have +8 or more Intelligence, you can point out that a robot's basic sub-routine would consider you removing the key a hostile act, but she'll give you the emergency code Blue Sunset to bypass this. The U.S.S.A. robot is called Pandora and it is reluctant to assist you until you enter the code. 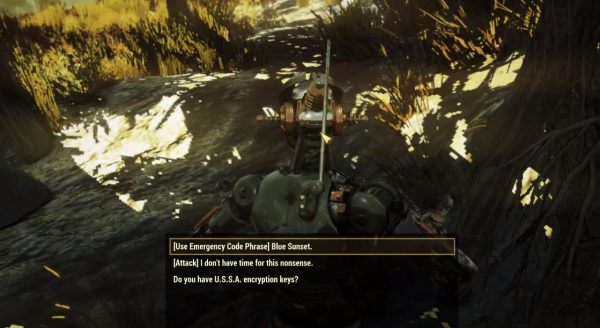 Return to Sofia and she'll ask if you know the whereabouts of a secure console location. You can offer up your camp - charge her if you feel so inclined - where you'll be able to construct the U.S.S.A. console to assist her. 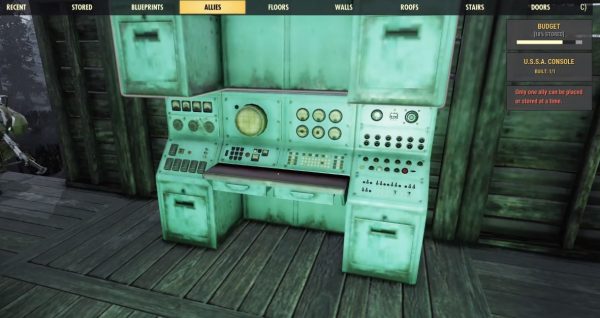 There are further quests you can complete that will eventually lead to romance options for both of these characters and we'll be adding more allies as we find them.

If you're just getting started with Fallout 76, you can check out our beginner's guide here, as well as our guides on how to complete the Hunter for Hire and Strength in Numbers questlines. You can also check out where to find Jangles at the fair here.