Human NPCs have finally arrived in Appalachia and there's a new story mode complete with two new factions to join in Wastelanders.

Alongside two new locations and factions - Settlers at The Foundation and Raiders at The Crater - there are a bunch of new quests to complete, NPCs to talk to and enemies to fight, such as the Wendigo Colossus. Before you get into all that, though, you'll need to complete the Hunter for Hire mission.

If you're new to Fallout 76, simply head out from Vault 76 and you'll run into Pennington, who'll direct you to Lacey and Isela, who'll give you the Wayward Souls questline. If you're a returning player, simply venture back towards the vault to find Pennington and begin the quest. 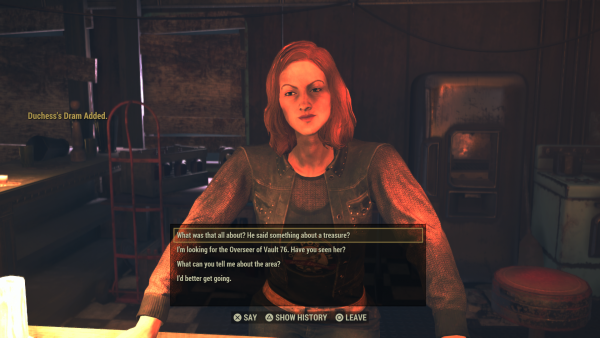 Speak with Lacey and Isela, who'll inform you that they're looking for treasure in Appalachia. They seem disappointed that you don't know anything about the supposed treasure within the vault, but they'll give you the Wayward Souls quest and point you in the direction of The Wayward to speak to Duchess. 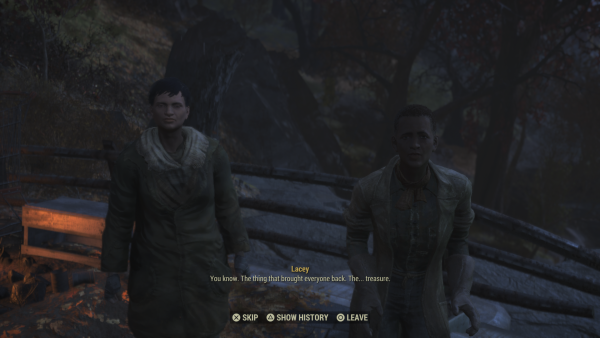 She'll inform you that a group of boys - the Free Radicals - routinely come into her establishment looking for Crane, who apparently knows where the treasure is. Duchess wants you to lure some of the Free Radicals to your camp to try and find out where their boss is hiding.

She'll give you the means to create a Crane's Treasure Hunting sign at your camp, though you'll need to visit a radio tower nearby to transmit the message. There's one to the west The Wayward at Relay Tower EM-B1-27 you can use but you'll need to clear our Scorched enemies first. 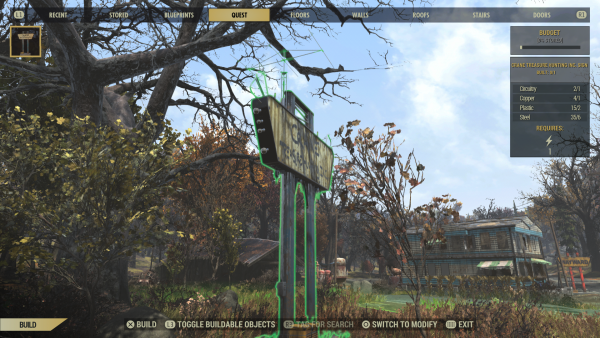 After that, raiders and other individuals will visit your camp and you can coax information out of them and eventually, you'll find out that the gang is holed up at West Virginia Lumber Company. If your Charisma is high enough, you can persuade them the treasure is actually in DC. Return to Duchess and she'll tell you about Anchor Farm and the special scrapper at the fairground.

Speaking to the family at the farm is the best bet here as they'll give you the password to the camp: Blue Danube. You'll need at least +3 Charisma, Perception or Strength to access the option, though, so grab some stuff to up your stats if they're too low. Liebowitz is the special scrapper holed up at the fair. He asks you to retrieve an egg - it's a Deathclaw egg, obviously, so sneak your way to the location, grab it, and swim like hell to the other side of the shore. 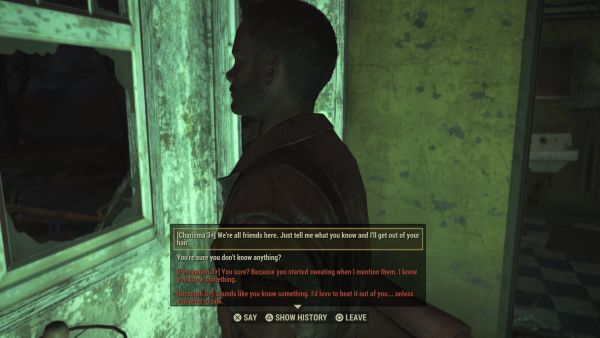 When you return, he'll give you a Stealth Boy for your troubles, so if you want to sneak your way in to take everyone out, then go ahead. You could also use Strength to threaten him to give you it without egg hunting, but you'll need a stat of +8 or more.

After that, head up to the camp and enter either using the password or threaten an attack and use your Stealth Boy. If you use the password, visit the leader, Roper. You have a few choices here: 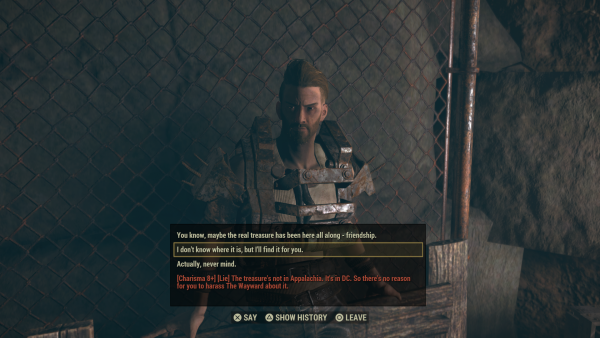 If you like sneaking, you can also find a white door found the back with a pickable lock that will get you inside - perfect opportunity to use the Stealth Boy. If you ask to join his crew and have one of the three perks, you'll get a cut of the treasure instead of just proving yourself. Roper seems to think it's chock full of gear, but who knows if that's just urban legend at this point.

Afterwards, you need to return to Duchess who reveals she knows a little bit more about Crane than she let on but wants you to find her missing muscle first. Accept the Strength in Numbers quest to carry on with the next section of the Wayward Souls mission by tuning your radio to the Transmissiter frequency to find them, where you'll find information about the missing people somewhere near Gauley Mine.

If you're new to Fallout 76, you can check out our beginner's guide here.