During QuakeCon, we got chance to find out more about Isle of Madness, the new expansion for Bethesda card game Elder Scrolls Legends.

Here’s an edited down version of our chat with Bethesda senior vice president of marketing, Pete Hines. 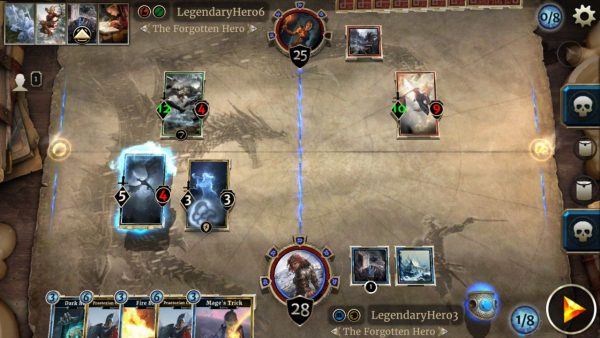 As someone who hasn’t played Legends, what can you tell me about the new expansion?

Isle of Madness will be based around Sheogorath, because it’s his realm. He has been featured in Legends in a couple of places before. We did a Madhouse collection a while back which was ten cards themed around Sheogorath. At the time, we also released Chaos Arena, which was Sheogorath taking over Versus Arena and adding a bunch of wacky lane conditions over a weekend.

We injected him into the game a little bit, folks really liked it, and so we wanted to look for an opportunity to explore that a little bit more. Shivering Isles in Oblivion was a big inspiration, but as far as what the designers are going to do, what’s it’s going to include, that’s TBD.

If you’ve been following the cadence of stuff we’ve been doing, in terms of sizes you’ll probably have a good idea of where it’s going.

Are you hoping to shake up the meta in a big way?

Always. Every time we do it, we’re always going to try put out cards that folks will find interesting, new tools, maybe making old cards more interesting or viable because of synergies that they offer. Or we can make tier two decks more like tier three decks, or we can give decks pieces to answer to decks they might be particularly vulnerable to. Honestly, if you’re just releasing 40 cards or 140 cards and they do nothing to the meta, you shouldn’t have bothered.

At the same time, our meta is really healthy right now. We have 15 viable colour pairs in the game between the ten two-colour pairs and the five three-colour pairs. And we’ve had 14 of those 15 represented at least once in the Masters Series. Green/Yellow Monk was the only one that didn’t have a deck submitted. That’s a great place to be.

That’s honestly where we want the meta to be: lots of viable strategies, lots of viable decks playing against each other. We want a new set to have an impact all over the place.

Honestly, we’re in a little bit of a holding pattern right now as we wait to go to this new platform. Interest in the Masters Series was terrific, we had a lot of people watching. The game continues to do well and be healthy. The client is a big deal for us, not only because it allows us to get Isles of Madness out, and, you know, it gets players engaged and nothing brings back players like new sets, but also other ways to do customisation.

We’re doing really well on the streaming side, building up our streaming community. Just this month, we had folks doing rebroadcasts on their Twitch channels just to farm our Twitch drops, so we introduced a new program to ban anyone who was just rebroadcasting. It’s been great because we’ve seen a spike in people livestreaming and people watching livestreaming. That’s what we really wanted - we wanted people interacting, participating with each other.

Do you think the console launch will make much of an impact?

Yeah, I think so. We were pretty surprised when we did Fallout Shelter [for console] and it had been out for years on phones, on PC. We put it out on PS4, we put it out on Switch, and you get this giant explosion of players. It was like, ‘Who was waiting for it on the PS4?’ Well, maybe they weren’t. Maybe they played it on their phone, they stopped, and now they’re like, ‘Oh yeah, I want to load this up and do some stuff, play whatever for a few hours, come back and do some more stuff in my vault’. Because it is a game where you sort of graze at it a little bit, you don’t have to sit down and play it for five hours.

So, because of the way Legends works - it’s the same game on all platforms - you may be playing it on your phone and then move to Xbox because you’re like, ‘Oh, I just finished my Fortnite matches for the night and now I want to play a couple of games in the arena’.

There’s an interesting thread there with Fallout Shelter, because Fallout sells because it’s Fallout. With The Elder Scrolls, I feel like perhaps Skyrim - even though it’s an Elder Scrolls game - is a more recognisable brand to the casual audience than Elder Scrolls is.

Yeah, but only because of how much Skyrim has sold. We also released like 137 versions of Skyrim, so that plays into it.