The world has undergone ecological collapse. The smug grown-ups who thought they had all the answers, the master plan that would save everyone - they’ve fallen quiet now.

The solution never lay in the bureaucratic world of adults, but instead with the determination and clear-thinking of teenagers.

Beyond the pastel pink skies and wing mutations, there’s little far-fetched about the world of Double Fine’s Rad. Our own world, after all, is one where Elon Musk can present a plan for transitioning to renewable energy at the Paris climate summit, and then donate money to a Republican party largely dismissive of climate change. One where the environmental protest of a 15 year old girl led to worldwide school strikes that have shaken the fossil fuel industry. Rad merely drenches our current global predicament in neon. 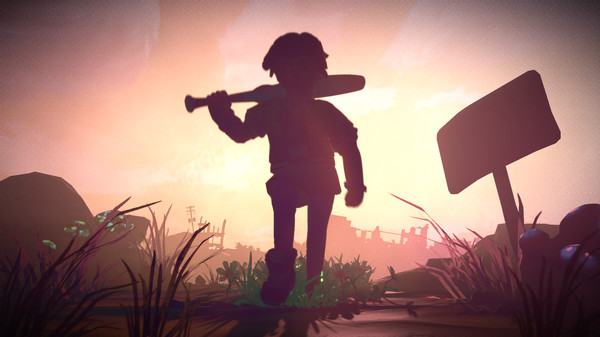 In its post-post-apocalyptic universe, a second society has already risen and fallen since the world ended. You set out across this twice-blighted landscape as a teen with a baseball bat, to fix the mistakes of the generations that have come before.

Any echoes of Stranger Things' Steve, defending Earth with a batter's swing, aren't too far from the mark. For game director Lee Petty, the planet's impending disaster took him right back to the nuclear panic of the '80s, when artists and designers were filling film scripts, comic books, and pen-and-paper RPGs with gooey mutants and forgotten tech.

These visions of future fringe civilisations were a way of processing the peril the world faced, and Rad does the same again - siphoning from the weirder, more satirical end of '80s pop culture. It's less a nostalgia project, though, than a warning against looking back in admiration. 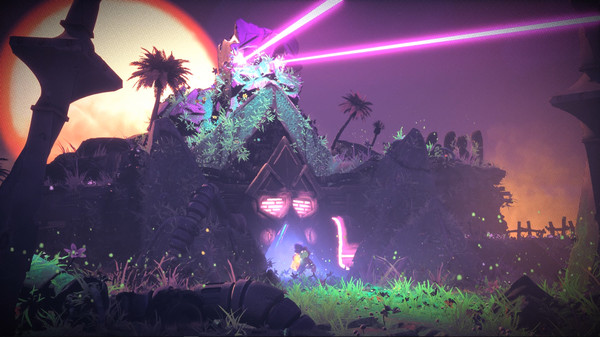 "Ultimately the youth of Rad are not here to restore the societies of the past," Petty says, "but to forge something new for themselves."

In fact, Rad has a good laugh at those who deify the people who came before them. Throughout the game you're accompanied by the voice of a narrator, a wizard-like Elder who provides feedback on your actions and delivers lore. But his knowledge of the past is comically imperfect, and he sometimes uses '80s slang to evoke a sense of ancient power that instead comes off, well, daft.

Petty says Rad also features a second narrator, the voice of a young girl, unexplained until you've finished several runs - which should give you an idea of what to expect from the game's structure. This is a roguelike, designed to be played many times over while you gradually piece together the secrets of its world. The enemies, loot, weather, stories, and communities you come across change with each run - as do you.

While your bat offers several melee combos, it’s secondary to your Exo-Mutations, random growths and appendages which can fundamentally change how the game is played - forefronting ranged, crowd control, or indirect damage. The fighting is fast, and rewards those who adapt quickly to their new skills, experimenting and improvising with the limbs springing from their body. 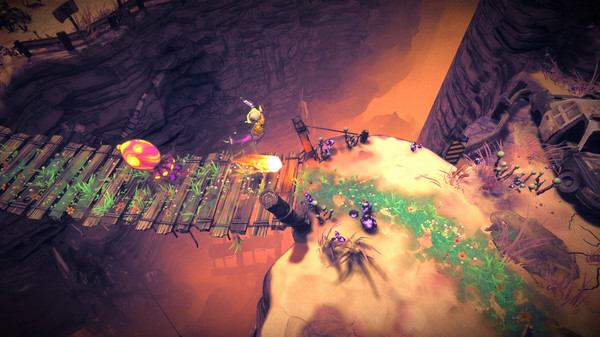 Petty has past form with volatile protagonists. As director of Double Fine’s Stacking, he created a world populated by Russian dolls and cast us as the smallest of them. This tiny chimney sweep was able to solve puzzles by commandeering other characters in the world and using their special abilities like adventure game verbs.

Then, in Petty’s retro sci-fi adventure Headlander, your protagonist was housed entirely within a rocket-powered helmet. By shooting the heads off your enemies, you could take their robotic bodies and steer them around until they become too damaged to be useful.

Rad’s mutations are a continuation of that theme, but leave you at the mercy of random generation - instead of dictating the changes to your body, you’re acclimatising to them. “I find that the impermanence of the player character speaks to the sort of existential angst we all have,” Petty says. “What makes us who we are?” 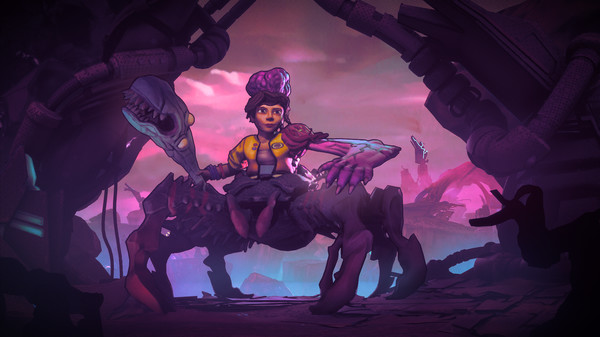 There’s a secondary angst here for Double Fine fans thrown by the studio’s recent Microsoft acquisition. Since splitting up its teams in the wake of Brutal Legend, the studio has been celebrated for its funny, strange, and bold ideas - games that have allowed figures like Petty to take creative control alongside Tim Schafer. Could Rad be the last of its smaller, experimental projects?

“I like to think what makes Rad a Double Fine game is an emphasis on personality, unexpected choices, and a strong aesthetic presence,” Petty says. “Microsoft has indicated [it wants] us to continue to work on the types of games that inspire us creatively, and it’s certainly what I am most interested in working on.”

Yes, there’s angst at the root of Rad - but channelled into a teenage, neon energy that ultimately feels positive. “Thinking back to some of that 80s media, I remembered that despite their dystopian worlds, there was often an underlying sense of hope,” Petty says. “That somehow, things could be fixed.”