Waking up in Disco Elysium is a painful experience. In the opening moments of the game, looking over the detective’s prone, near-naked form is like walking down a familiar road to a familiar end. The tag-team dialogue of his Ancient Reptilian Brain and Limbic System paints a verbal picture of stale whiskey-mouth, bloated confusion, and pain – so much pain. Positioned in a pantsless, vulnerable pile, he’s a dead ringer for my previous life as a shambling alcoholic.

But you can’t sleep forever. At some point, you have to get up.

As I prodded the detective to stumble around his trashed hostel room, I remembered what it felt like to be undead and very unsober – the hot, sticky void in my stomach, relentless pounding in my temples, and most of all, the serene indifference to all the things I might have done the previous night. In the detective’s case, he has no idea who or where he is, nor does he have the fortitude to look at himself in the mirror. I don’t blame him.

I’ve been that person more than a few times, and like Disco’s mess of a protagonist, I hold deep karmic debt to some very patient people. Friends and family members who have, over the years, found me unconscious under a tree, peeled me off a road, and bathed my limp, vomit-drenched body like a baby. At one point, some of my housemates tried to organize an intervention. At a work event, as a fully employed adult, I lost it so badly that my mother was called to fetch me from the venue, the backseat of her car lined with towels; my dead-weight body was carried out of the bathroom by three people, like an overgrown newborn coated in a protective membrane of bile and jagermeister.

Like the detective’s colleagues at Precinct 41, several people in my orbit were resigned to the fact that I had to hit rock bottom before anything changed. Like the detective, who has semi-conscious reasons for getting nuclear-grade wasted, I clung to my self-destruction like it was part of my identity. And very much like the detective, who retains an incorrigible sense of hedonism despite learning how much he’s screwed up, I remember one of my friends observing that despite it all, I “[seemed] to be having a lot of fun.” 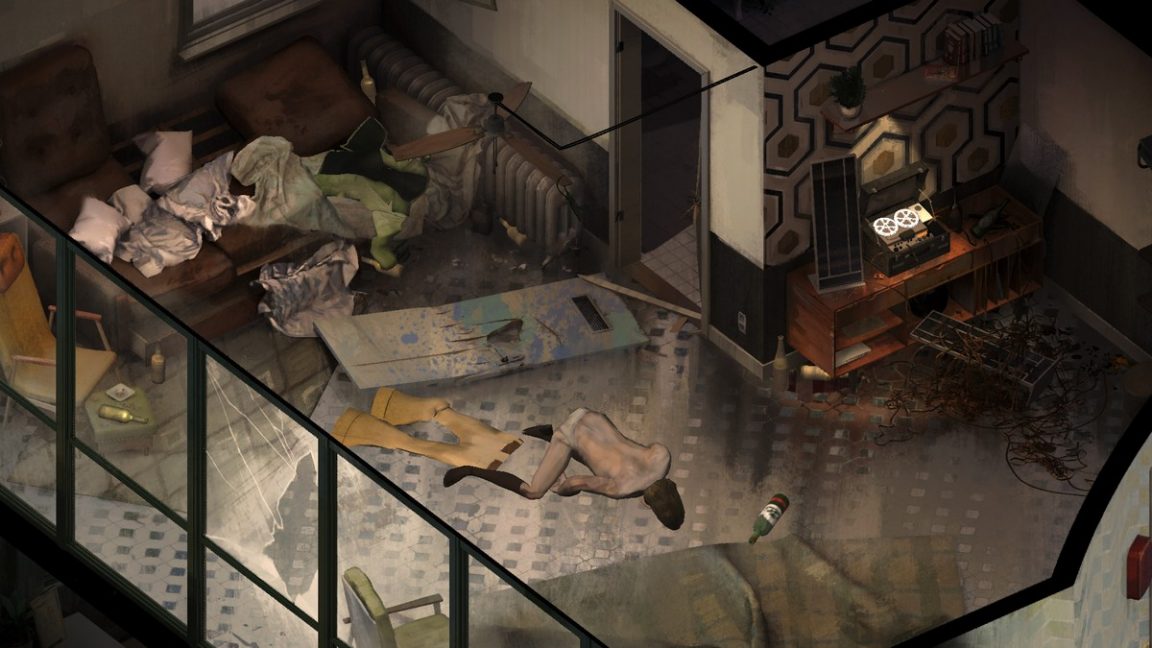 It’s true. In old photos I look like I’m having a blast, thanks to the twin blessings of youth and selective memory. But Disco Elysium, a game best known for its hulking themes of inequality, injustice, and existential dread, is also a deeply personal look at identity, shame, and feeling very, very small. Sure, there are booze and drugs in plenty of other RPGs. But Disco, with its merciless focus on the detective’s inner workings, is singular in its ability to remind me just how much I failed – and in spite of it all, survived.

Playing months after launch meant that I already knew Disco was about being a screw-up; a friend told me that it was “drunk white men: the game,” a pastime that I’ve sunk way too many hours into and now actively avoid. And so, while trying to settle on my special character skill at the start of the game, I chose Volition – the force of will to keep myself together.

I tentatively decided – with growing confidence as I went on – to play the detective clean. Perhaps having to scrape his sad figure together like a broken pinata made me less keen on getting sauced. On a very basic level, I wanted to solve the murder, and didn’t want to be drunk while doing it. As I interacted with more characters – the embittered bartender, Kim Kitsuragi, and everyone’s favorite child addict Cuno – I became awkwardly conscious of forcing my real-life baggage into the detective’s ill-fitting suit, one that was designed to go big, or go home. 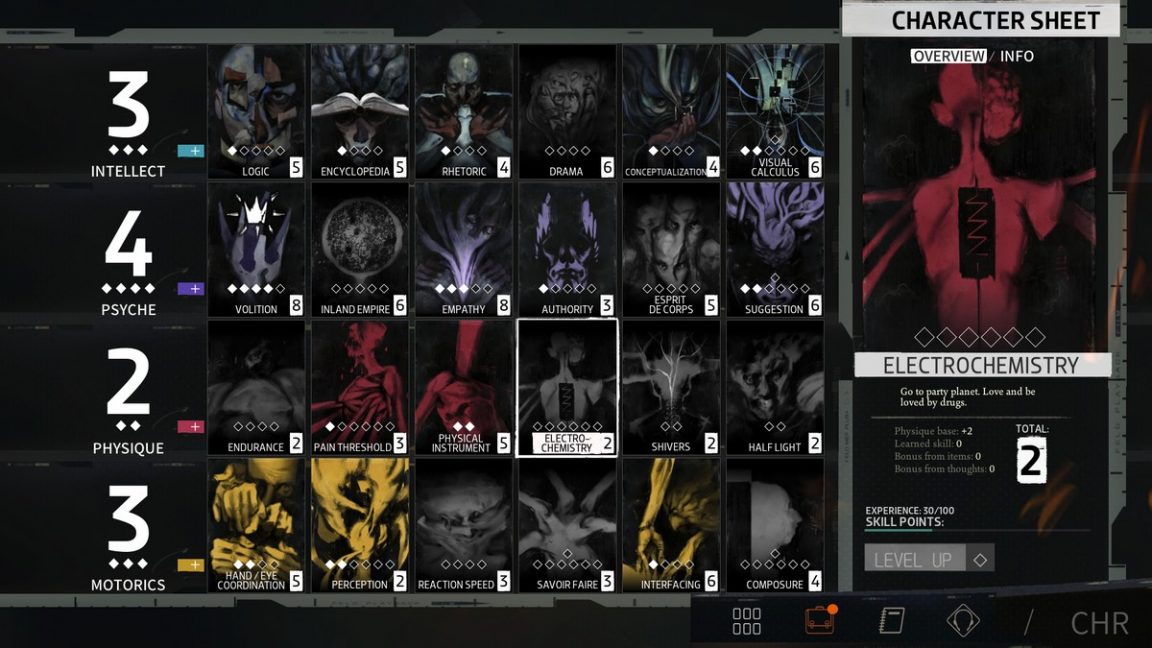 Perhaps I felt like I’d already done enough damage in the game, and was projecting my own history onto a little clump of pixels on a screen. The guilt was strong. Over time, I began to believe that my detective was, in fact, an amnesiac murderer. When I chose that dialogue option, even Kim told me that was a dumb idea – the evidence didn’t point to me as the culprit. Still, for a little while, I committed myself to the possibility that I had shot and killed a man, simply because I didn’t know what I’d done the previous night.

I’ve never murdered anything, except for the occasional karaoke song. I know about the damaged property, lost items, public humiliation, and people I’ve thrown up on because friends told me what I did; sometimes it felt like someone chastising a poorly-trained puppy in the hopes they’d never do it again. On some occasions, I saw proof of said destruction in the cold light of day. I just couldn’t remember.

When the detective finally realizes that he totaled his motor carriage while high off his tits, it’s a messy triumph: he can stop speculating because the unknown has come to light, but it’s also a new low. There’s little you can do to verbally comfort someone who’s coming to terms with their failures beyond helping them keep some form of momentum – Kim, for one, offers wordless support simply by staying with the detective. Picking up empty bottles and cans to trade in at the Frittte shop was a darkly humorous way of giving him a small, menial task to make amends. In the real world, I did this through rigorous, punitive cleaning. 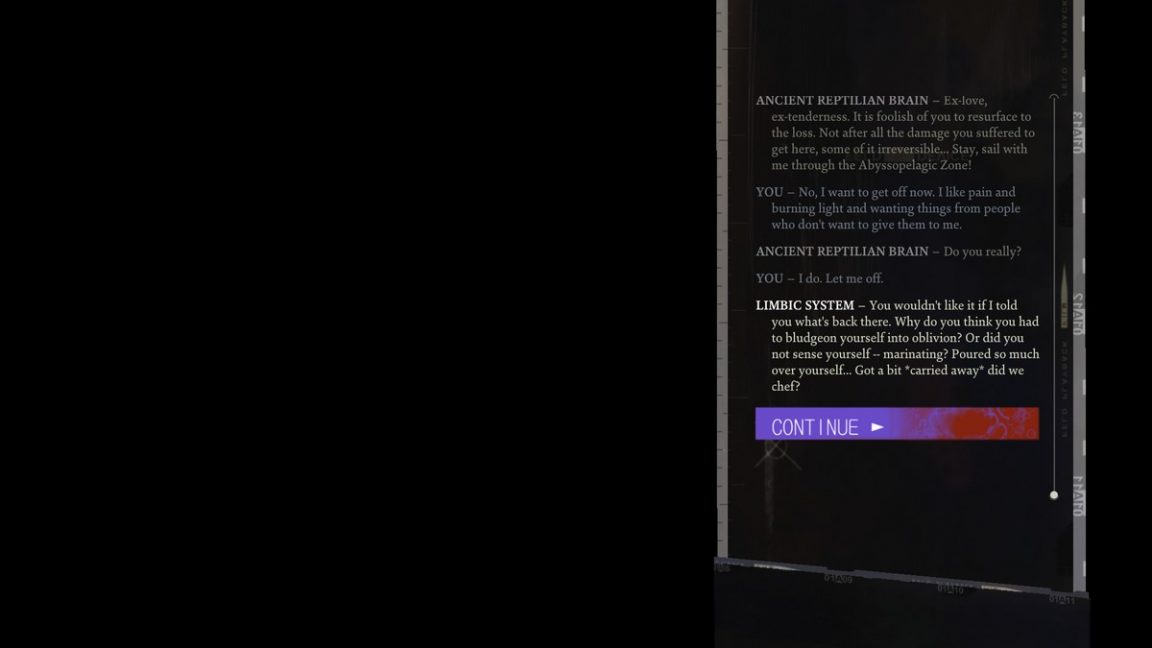 But the real savagery of Disco’s impact lies in the way it simulates social pressure – little moments when parts of your head whisper snide comments about your obstinately dull choices. Electrochemistry – an aspect (and levelable skill) of your Physique – will pop up here and there to goad you into being more fun. This might mean pocketing speed from a medicine cabinet, buying drugs from Rosemary, or getting sloshed for an extra +1 to Physique.

In 2015, I’d mostly gotten my act together – part and parcel of owning a small business with partners, employees, and clients. I worked out, ate well, and drank a sane amount on weekends. But to some, I’d become a noticeably different person. An old friend came to visit me in Los Angeles and declared me changed and boring. Not necessarily because of the drinking, but because drinking had so beautifully amplified my clinical compulsiveness to carpe diem my way into trouble. Crocheting is an acceptable wholesome flavor of boring, but failing to meet someone’s social expectations – someone with whom you share a long and occasional sordid history – can be a deep cut.

I have no profound reasons as to why I imposed my sobriety onto my experience of Disco Elysium – the best I can consciously offer is that after the first few in-game days, sunk cost fallacy kicked in and I wanted to preserve my “investment.” I’d also quit smoking in this way. After 15 years of being a pack-a-day smoker, stopping (and eventually quitting) became easier as I cut down on drinking – the two are irreconcilably mated together in my mind. 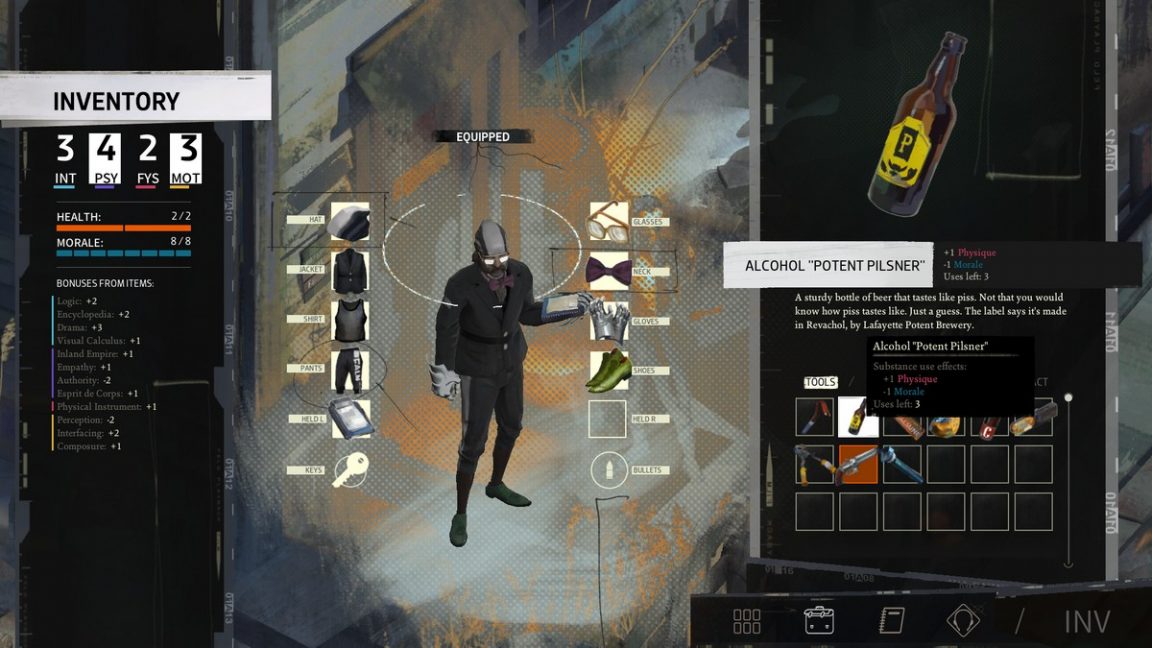 Faced with the choice to buy a pack of cigs in the game, I thought about a Tom Robbins quote I loved in my 20s: “We smoke to capture the power of the sun, to pacify Hell, to identify with the primordial spark, to feed on the marrow of the volcano. It's not the tobacco we're after but the fire. When we smoke, we are performing a version of the fire dance, a ritual as ancient as lightning.”

I haven’t read anything as idiotically romantic about drinking that resonated half as well to my young mind, but even the routine act of having post-work beers has lost its shine. Most of my family members are drinkers, and treat my relative sobriety with perplexed bemusement. Today, I reflexively describe myself as a boring person simply because I don’t drink, except for the occasional Christmas scotch or celebration drinks at a wedding. I know this is stupid, but the words come out of my mouth anyway. Completing Disco Elysium “clean” felt like a betrayal of my natural bent for hedonism – or at least, what’s left of it.

But I can’t help but think about doing another playthrough where I turn myself over to Electrochemistry in an act of fatalism. I think about the dim sanctity of the church where Andre and the anodic dance music kids make their home. I think about raves, and festivals, feeling my body become warm and loose and free. Damned if I do, damned if I don’t. After writing this, damn, I’d love a cigarette.