Detective Pikachu doesn't offer an enormous amount of actual game to play, but what's there is hugely charming and entertaining.

When it was announced that the upcoming Pokemon live action movie wouldn't be based off the story of a young boy named Ash heading out on a coming-of-age quest to become a Pokemon Master, I balked. As far as Pokemon story goes, that is Pokemon, right? Well, no - after playing Detective Pikachu, it's immediately clear why this sort of story is perfect for adaptation to the big screen.

That's the thing you really need to know about this game. Where Pokemon has typically been pretty free-form and loose-fitting with its story in the games, Detective Pikachu is a proper, enclosed narrative with properly paced story beats, twists and a surprisingly sharp sense of humour. This is Pokemon as you've never quite seen it before.

The star of the show is of course the titular detective, a gruff, sarcastic English-speaking Pikachu who doubles as both the player character's sidekick and a key piece in the narrative's over-arching mystery. While the actual story is quite different to the wide-eyed, meandering discovery stories told in the anime the slapstick, the happy-go-lucky tone of the TV series is nailed here, making Detective Pikachu's story a joy to experience.

Originally an episodic game in Japan, this newly localized release offers the complete story as one cohesive package that most closely resembles the likes of Ace Attorney or other visual novel mystery-solving games.

You must go into it knowing what to expect, and that's a very straightforward puzzle-adventure game.

You'll be doing a lot of prodding around various environments within Ryme City looking for clues before spending an equal amount of time questioning persons of interest in order to fill in details on your knowledge of the crime, then. Sometimes the witnesses are people, but other times they're Pokemon, your bi-lingual Pikachu gruffly translating their testimony into something you can understand.

Once you've got the clues you need, you'll eventually begin to put together a hypothesis of what happened and make an argument for your case. There's a broader thread of mystery throughout the plot (why can this Pikachu talk, and where is the protagonist's missing father?) but you'll also find yourself thrown into other cases around Pokemon theft and illegal research along the way. It's all very, very similar-feeling to Ace Attorney, though it's silly in an entirely different way, making good use of the unique aspects of the Pokemon series setting. Smartly, however, it doesn't rely on any previous Pokemon knowledge - you could easily give this to an Ace Attorney or Professor Layton fan with no Pokemon knowledge whatsoever and they'd still have a ball. 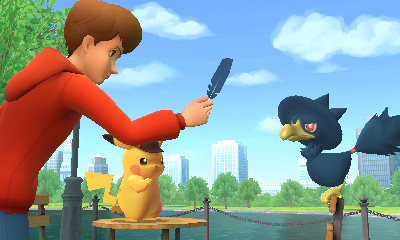 It's a good looking game too, a sharp little reminder that the 3DS was in its time a real box of wonders. Obviously one can't play this without sort of wishing it was on Switch, but it says a lot about the game that after the opening half hour or so I quickly forgot about what a small screen I was playing it on. The voice work is solid, also.

The puzzles on offer are ultimately pretty easy, with the brain teasers clearly balanced so that even younger Pokemon fans will be able to muddle their way through. It's not challenging puzzles that'll keep you engaged with Detective Pikachu's antics anyway, mind: it's all about that charming and often genuinely funny execution.

With a story that cutely plays with the tropes of both Pokemon as a series and pulpy crime stories in equal measure, it's difficult not to be sucked in. It also becomes immediately clear why this was the story chosen for adaptation in Hollywood: where the story of Ash might make for a better straight-up kids story, Detective Pikachu's plot offers the chance for some jokes that'll make adults chuckle too in that manner Pixar has become so expert at.

Detective Pikachu isn't some groundbreaking barnstormer, but it's also very difficult to fault. The lack of challenging puzzles and other traditional game elements will be a major stumbling point for some, and that's perfectly understandable - you must go into it knowing what to expect, and that's a very straightforward puzzle-adventure game. If you do that, you'll find it a charming, funny and interesting spin on all things Pokemon. Most importantly, this spin-off is incredibly entertaining.