Crackdown 3 is a game in which, as Terry Crews, you punch cars to death.

When they explode, Terry Crews goes up in flames, gets thrown back a few feet, then punches another car out of anger. Later on, Terry Crews becomes so powerful that he can pick cars up and throw them over buildings. Do the cars sometimes have innocent people in them? Shut your mouth. Terry Crews has a city to save.

In the interest of fairness, I initially decided not to play as Terry Crews because I wanted to take Crackdown 3 on its own merits, rather than artificially inflating my opinion due to pleasant daydreams of being rocked back and forth like a child in his powerful arms.

There’s 21 agents in total, most of them unlockable by finding DNA pickups around the city. They tend to differentiate themselves by offering experience bonuses to different skills: melee, driving, etc. There are, unfortunately, no anthropomorphic dogs or anything like that, and aside from the bonuses, they all play more or less the same. Predictably, I went with Terry Crews’ Agent Jaxxon for most of my playtime. What can I say, I love me some five year old memes.

It’s worth talking about that playtime upfront, because I can see it being a huge sticking point for some. After completing the main campaign and doing about 90% of the sidequests, including some pissing around on jaunty, orb-hunting escapades, I clocked in about twelve hours. On one hand, it’s refreshing to encounter an open world that doesn’t require weeks of forced isolation from society to complete. On the other, the slim runtime means there’s little opportunity to experiment with late game abilities and high level characters. 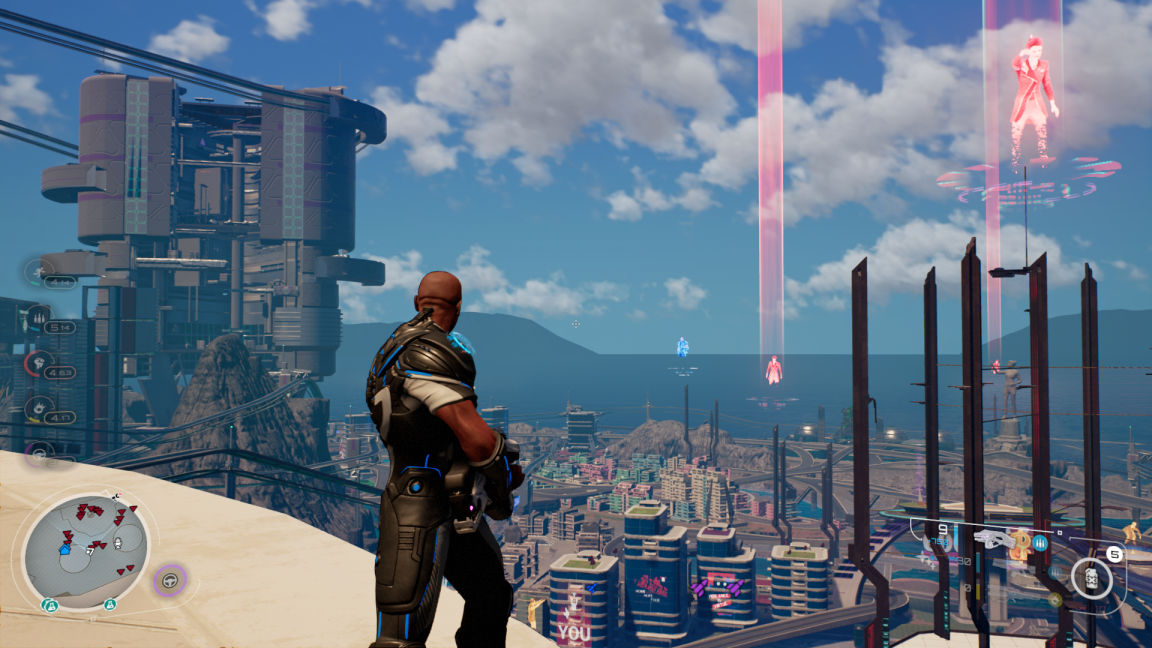 Let’s not fry up a sizzling pan of word mince, here, either. Crackdown 3 is a full price release, and while fifteen or so hours may be perfect for a tailored, cinematic narrative, it’s slim to the point of lacking for an open world. The option to buddy up for the campaign or go head to head in fully destructible multiplayer environments may well turn the game into something truly special. I wouldn’t know. At the time of writing, neither the co-op or multiplayer were available.

The short length might have been a mercy if Crackdown 3 was the trainwreck some feared it might end up being, but it’s not. It has issues - some dodgy textures and uninspired boss fights - but most of them end up contributing to its charm. Design-wise it’s a clear throwback to a previous generation, but refreshingly so. After a shaky start, I found it difficult to wipe the grin off my face for most of the campaign.

Crackdown 3 takes place in a shiny neon city full of bad dudes doing bad things to the poor in the pursuit of profit, like a gang of cyberpunk Bobby Koticks. It’s all fairly on the nose but easy to get behind, and also easily ignorable. That said, it’s just enjoyable enough to get you pumped for a lovely spot of rampaging. It’s also backed up by some genuinely nifty cutscenes and suitably cheesy dubstep. Music can be a bit sparse to the point where silence is occasionally noticeable, but this also means that the synthy, bass-heavy bangers are that much more effective when they do show up. It’s all self-consciously excessive silliness, but hey. That’s Crackdown.

The city itself is a sandbox in the truest sense, and what I mean by this is it’s dry as hell and full of plastic toys and also maybe someone pissed in the corner but I don’t really feel like checking right now. Architecturally, it can be quite inventive, finding a pleasing balance between traversal considerations and depicting a slick, neon corporate hellscape. It also helps that there’s effectively no downtime in Crackdown 3, no moment that encourages you to engage with space as anything more than a synthetic playground. The moment you do start thinking of the city as a place where people are actually supposed to live, though, is when the cracks begin to show. 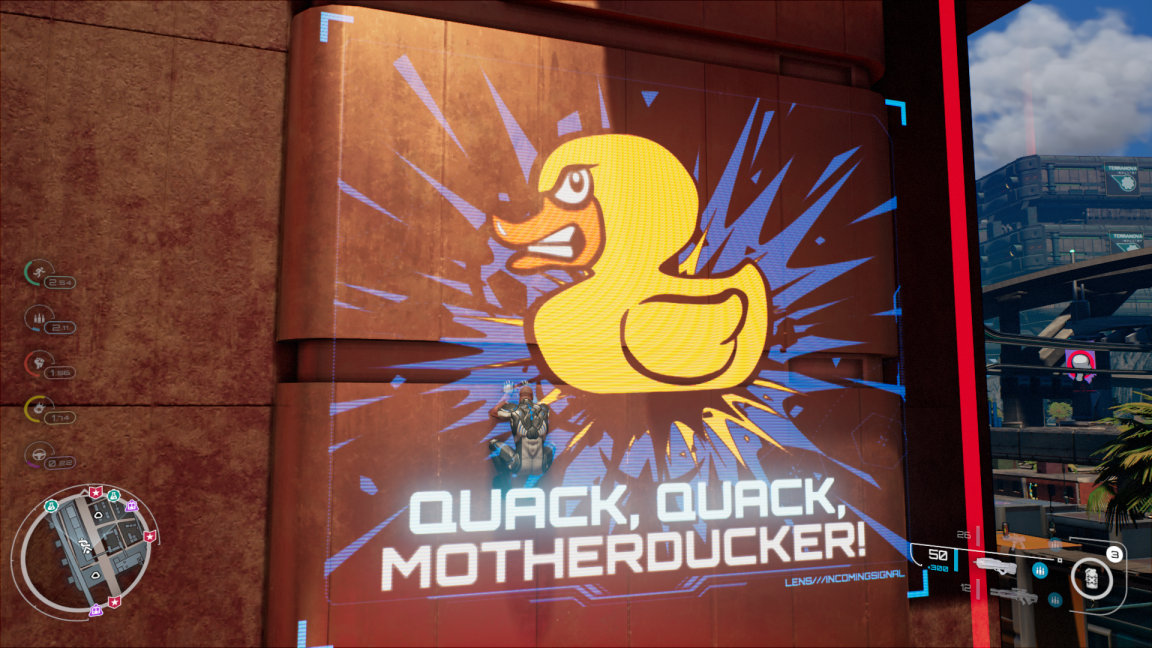 To be fair, this synthetic, over-stylised atmosphere fits well with the central narrative conceit - a living space turned into a gaudy corporate machine, with obscenely expensive multiplexes looming over crumbling favelas. Still, stacked up against recent open worlds, Crackdown 3’s city remains underpopulated and lacking texture, both atmospherically and visually.

And yet none of this is enough to strip the sheer joy from the simple act of traversing the city. The further you progress, the more movement options you’re given. Once you start chaining them together, the game becomes something special. As strange as this sounds, I found myself engaging with Crackdown 3 in a way I hadn’t with a game in quite a while. Experimentally. Joyfully. In other words, I played with it. Combing gravity defying landing pads and boost jumps. Charge-punching dickheads off massive skyscrapers. Throwing too many cars. It’s the result not only of systems that work well together, but systems that invite you push them to their limits. Nothing, from the combat to the climbing, feels quite exact. Everything teeters just on the enjoyable side of broken, and it’s fantastic fun.

Those agility-boosting orbs are back, of course, and work best when you’re not actually searching for them because they’re literally everywhere anyway, stuffing themselves into the game’s already rapid reward loops and ensuring that your gamer brain is never more than about fifteen seconds away from a congratulatory head pat.

As far as missions go, it’s mostly different flavours of killing things and blowing things up, just as you’d expect. There’s also races, both on foot and in the game’s floaty, stiff feeling vehicles, and propaganda towers - vertical platforming puzzles which are far more inventive and enjoyable than anything Ubisoft has done in recent memory. 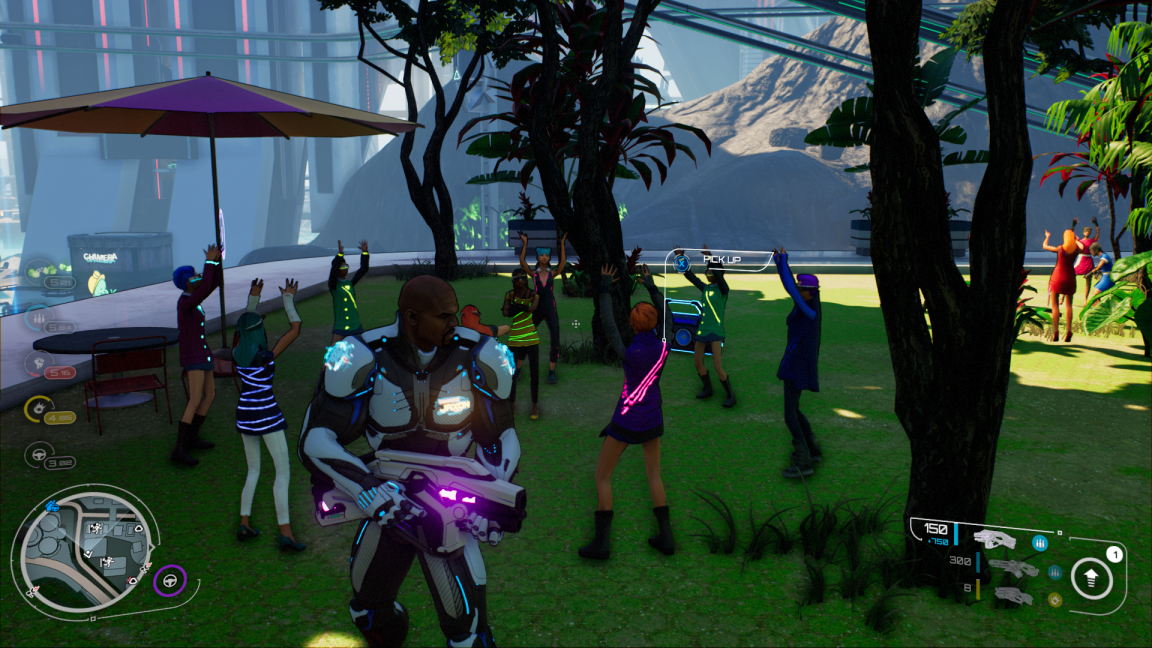 There’s a slew of bosses scattered throughout your progression through the main campaign, and they’re generally quite dull. Just beefier, hurtier versions of things you’ve fought before. Repeated designs are partially understandable, since your mobile, nigh-on invincible agent means only certain types of obstacles provide a challenge. Still, most end up being more irritating or inconsequential than the epic encounters the game presents them as.

Aside from the bosses though, difficulty seems about right on the standard setting. Everything puts up just the meager amount of resistance necessary that destroying it feels like a worthwhile accomplishment, without being challenging enough to ever throw doubt on the idea that your chosen agent is an unstoppable machine. Again, it’s all about contributing to Crackdown 3’s finely tuned sense of flow. There’s always just enough obstacles, just enough friction to reinforce your status as a genetically engineered badass taking on a hostile city, without ever really slowing you down.

So look, if you’ve got Game Pass or plan on getting it, and you’re up for a few evenings of uncomplicated video game-ass video game fun, it’s absolutely worth the download, no question. It genuinely feels like it was made by people who love and understand what made the original game such a cult hit. If the troubled development cycle is evident, then it’s in the limitations of scope and polish, rather than heart or quality.

All this said, I’d be extremely hesitant to recommend anyone part with $60 for it. There’s just not enough here. Still, all things considered, Crackdown 3 being this enjoyable represents a minor miracle, and I’d love to see what these teams are capable of with the franchise without being dicked around by corporate for half a decade.