With the release of patch 1.21 for Call of Duty: Warzone, the mystery of the locked bunkers has been solved, for the most part.

If you don't already know, Red Access Cards can now be found all around the map as loot. Those unlock access to all bunkers except bunker 11. Bunkers hide a treasure trove of high-tier loot and killstreaks, but that's about it.

The real prize, however, is inside bunker 11, and as you may have already guessed, getting inside that one is not a simple process. There, you'll find everything from cool Easter eggs hinting at future content, to the Legendary MP7 blueprint (Mud Drauber), which is usable in all multiplayer modes.

Of course, unlike all the others, bunker 11 will not open using a key card. In this guide, we'll lay out exactly what you're gonna need to do in order to get inside bunker 11.

Before we get started, keep in mind that the numbers and exact phones you need are random for every match. You should also know that the Easter egg can be done in both BR and Plunder, in any of their respective modes (Solos, Trios etc.). We also recommend bringing a helicopter to make all the map hopping faster.

Warzone phone map - where to find the Russian numbers

The Warzone Verdansk map has numerous telephones of different shapes and sizes, but only a few will let you interact with them. The working phones are split into two groups. We'll call the first Activation Phones, because we'll be using one of those to start the hunt. The other group we'll call Morse Code Phones, which are needed for the second step.

First, we need to figure out where the Activation Phones are located. Thankfully, Reddit user StrangerRobijn has put together the handy map below highlighting the locations of all the phones we're going to need for this adventure.

To start, visit any of the locations with a blue marker and interact with a phone there. Some players have had better luck by starting off with the one at the Dam, but you can really go anywhere marked in blue.

You'll know you have the right phone when you hear someone speaking in Russian, followed by a musical tone (jingle). What comes after that tone is what we're here for.

The voice will say three random numbers in Russian, from zero to nine. Listen very carefully for the numbers and their order, because we'll be activating three other phones that correspond to each of the three numbers.

If you interact with a phone and you get a busy tone, you're not using the right phone - look for a different one in the building/room. If you hear Morse Code instead of the Russian speech we mentioned, you need to move to a different area (marked blue) and try your luck with the phones there.

Eventually, one of the phones you interact with will give you three numbers to get you started. Both the order and the numbers themselves are important, so keep hitting the button to make sure you got it right. Unless you speak Russian, you're going to have to consult a pronunciation guide for Russian numbers. You can use this pronunciation guide for reference. It's less complicated than it sounds.

How to open bunker 11 in Warzone

Now that you have three numbers, we'll once again use the map above, or the video below from Geeky Pastimes. This time, we need to activate three of the Morse Code Phones (marked in red) that correspond to the different numbers. For example, if the numbers are three, two, one, we'll need to interact with the phone north of Quarry, followed by the one in Lozoff Pass, and finally the one in Downtown.

Once again, the numbers are going to be different for everyone.

When you interact with the right phone, you'll hear a Morse Code. Once you have that done for the first phone, move on to the remaining two in the right order. When all three Morse Code Phones have been interacted with, you'll be able to unlock bunker 11. Thankfully, you won't have to decipher the Morse Code you hear.

Bunker 11 itself can be found North of the fire station near the Military Base. Or you can consult the map below if you don't know where that is. You'll know you've done all the steps correctly when you see the light turn green as you arrive. Now, all you need to do is interact with the keypad at the door to open it. 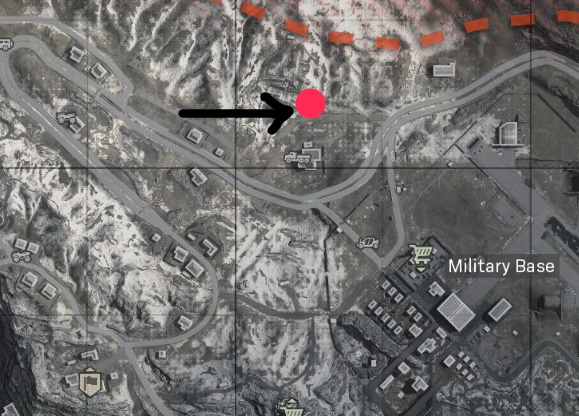 How to unlock MP7 Mud Drauber in Warzone

Now that you've accessed bunker 11, take your time to explore it. Behind the second door on the right, you'll find two blueprints of the MP7 Mud Drauber on a table. Grab one and it's yours.

Bunker 11 also has a few other rooms with various things you can interact with, such as the big computer room, and the one with the red button overlooking a nuclear warhead. We do not yet know if that leads to a different part of the Easter egg.

For now, enjoy your hard-earned blueprint and newfound knowledge of the Russian language. If you found this helpful, hit up our Warzone tips and best loadouts.