When Assassin's Creed Valhalla's toughest enemies are beating you down, nothing turns the tide faster than your suite of powerful adrenaline abilities. Whether it's an explosive arrow trap, eagle-eyed axe combo, or unstoppable spear tackle, making full use of your Viking toolkit is vital when the going gets tough.

However, instead of dishing out your abilities for free, Assassin's Creed Valhalla tasks you with searching medieval England for Books of Knowledge. These texts detail the ins-and-outs of the game's most powerful special moves, so you'll want to hunt them down as soon as you can.

There are tons of Books of Knowledge scattered across Norway and England for Eivor to find, but keep in mind that not all of them will be accessible from the start of the game.

Oftentimes, these ability books are found in monasteries, crypts, catacombs, and other Saxon population centre - many of which you will visit naturally as you play through Assassin's Creed Valhalla's main quest.

This means that while you can definitely go out of your way to round everything up as soon as you gain access to an area on the map, but you might find yourself backtracking through areas you've visited previously if you do.

Below we've marked the location of every single Book of Knowledge on Assassin's Creed Valhalla's map, along with screenshots for how to acquire a few of the early game abilities.

Grabbing the best abilities can give you edge in optional boss battles like the Lost Drengr Erik Loyalskull, and the Elk of Bloody Peaks Legendary Animal.

There are a total of 22 abilities for Eivor to learn in Assassin's Creed Valhalla.

These abilities fall into two categories — melee and ranged — with 11 of each type. Note that unlike with skills, these categories do not correspond to animal affinities or branches on the character upgrade tree: they're just an easy way of telling what type of combat the ability supports.

There are two ranked levels within each ability, with the second level giving Eivor access to a more powerful extension of the original ability. In most cases, these ranks correspond with two Books of Knowledge that can be picked up around the game world.

Picking up one Book of Knowledge will give Eivor access to Rank 1 of each ability, while obtaining both will unlock Rank 2. However, you can collect the pairs of books in any order: the first you find will always unlock Rank 1, and the second will always upgrade Eivor to Rank 2 in that ability.

Please refer to the following table for a comprehensive run-down of abilities in Assassin's Creed Valhalla:

Locations on the table marked with an asterisk (*) indicate that the ability is obtained in ways other than finding a Book of Knowledge. Please see the section on Ravensthorpe abilities: how to unlock them for more information.

There are three Books of Knowledge in Rygjafylke, which grant the following abilities: 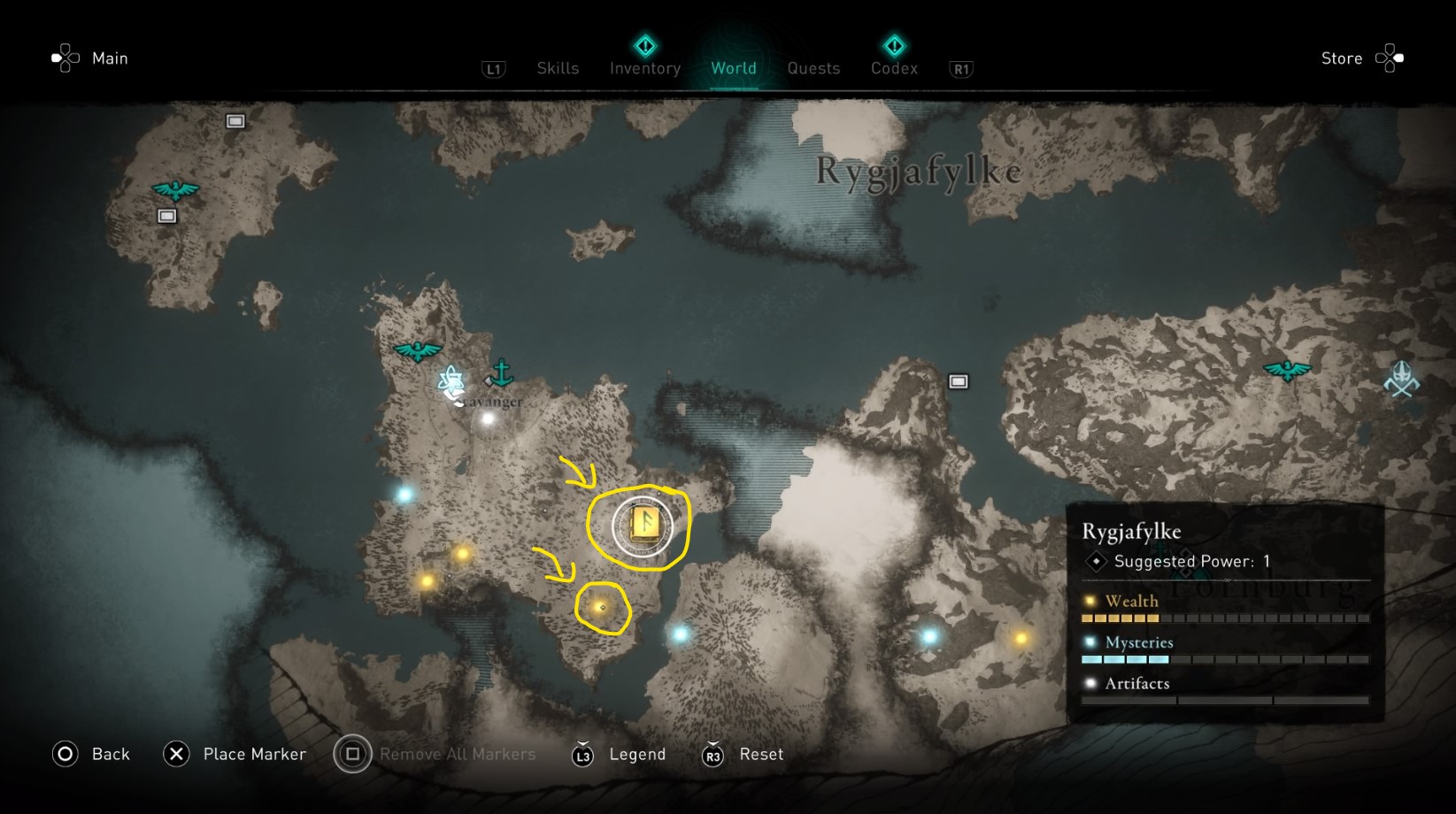 The first Book of Knowledge is found to the southeast of Stavanger, in the west of Rygjafylke. Hold R3 to use your Odin's Sight to pinpoint its location, then climb over the side of the wooden barrier as shown below. There you'll find a book which grants the Throwing Axe Fury ability. 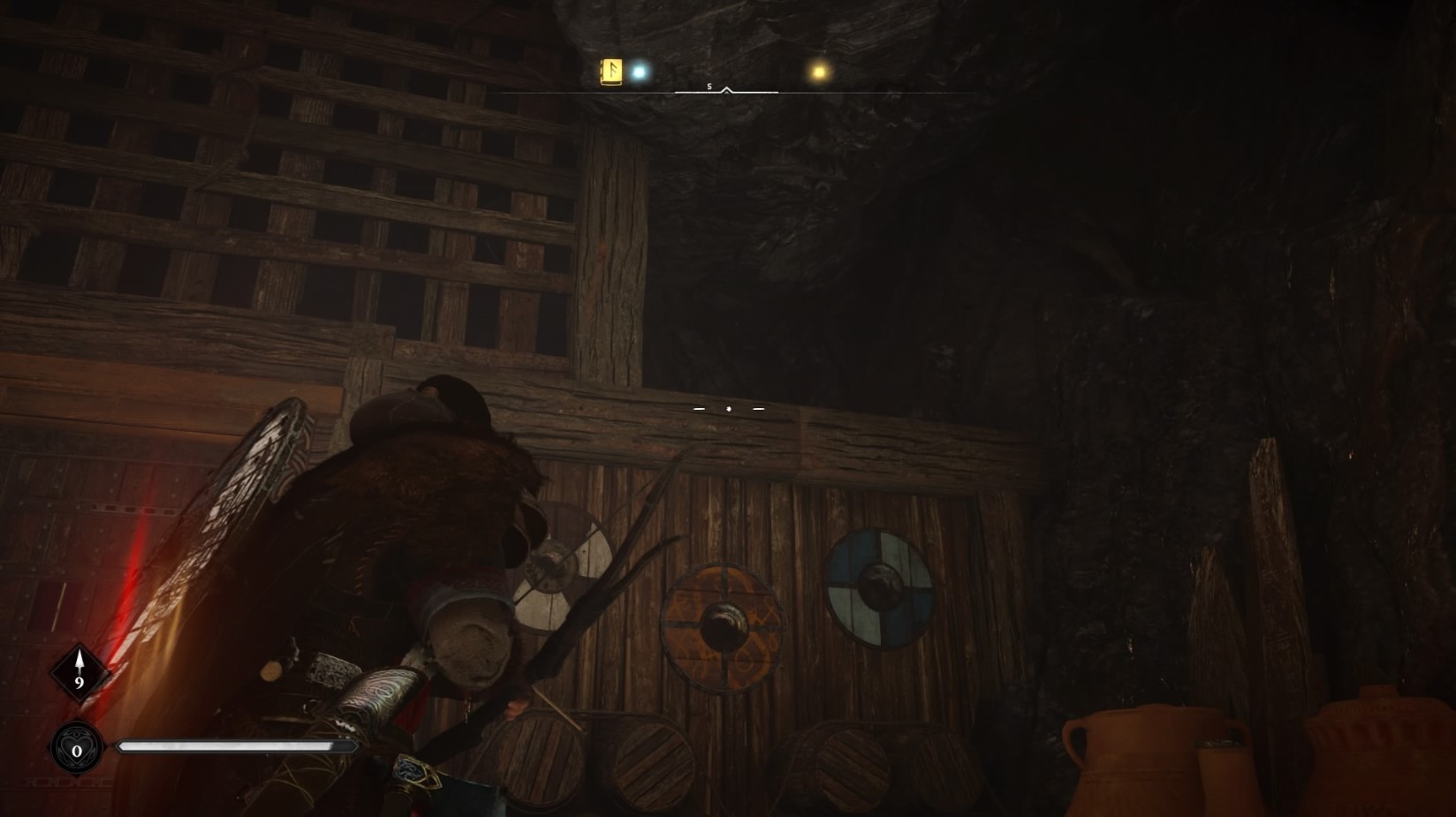 Then at the second circled location, an encampment far to the south of Stavanger, look for a wooden tower. 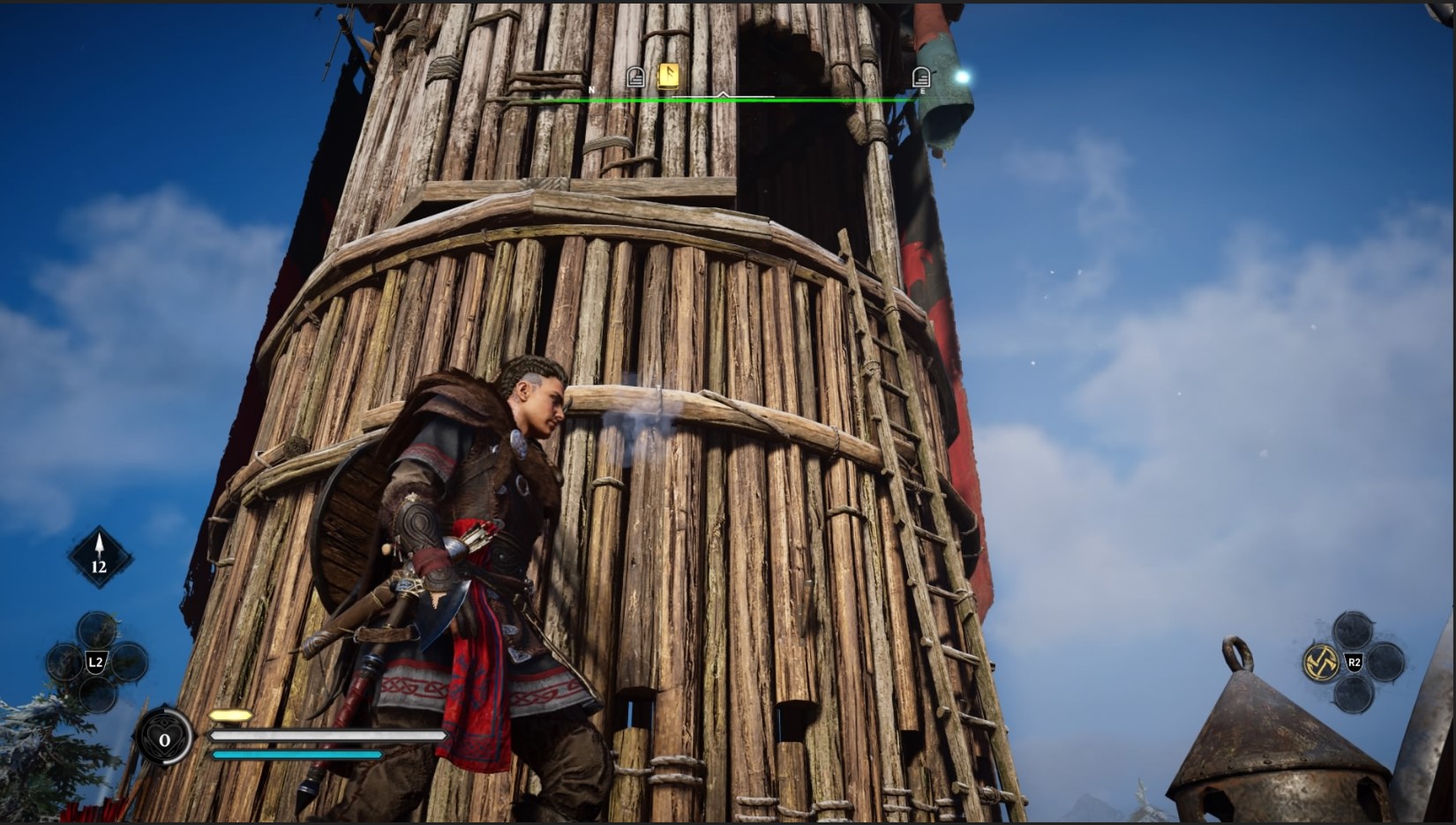 Climb the tower, then break the wooden barrier covering a ladder with an arrow. Climb down to collect the Book of Knowledge and the Thorn of Slumber ability.

Finally for Rygjafylke, the Rage of Helheim ability is to the northeast of Kjotve's Fortress, which you visit during the main story. It's in the far northeast of the map. 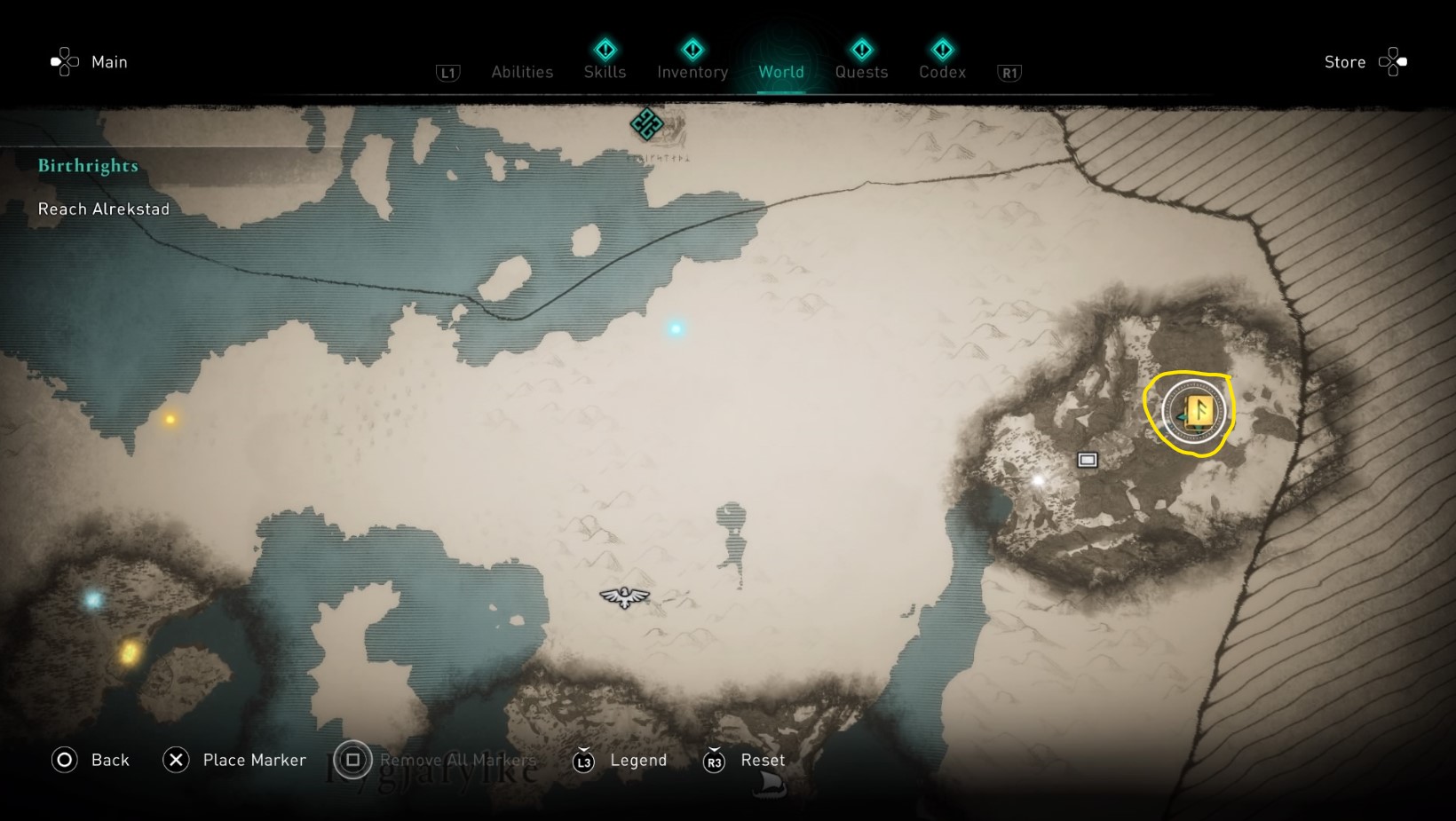 Enter the cave, ignoring the warnings that area ahead isn't available, and grab the Book of Knowledge. 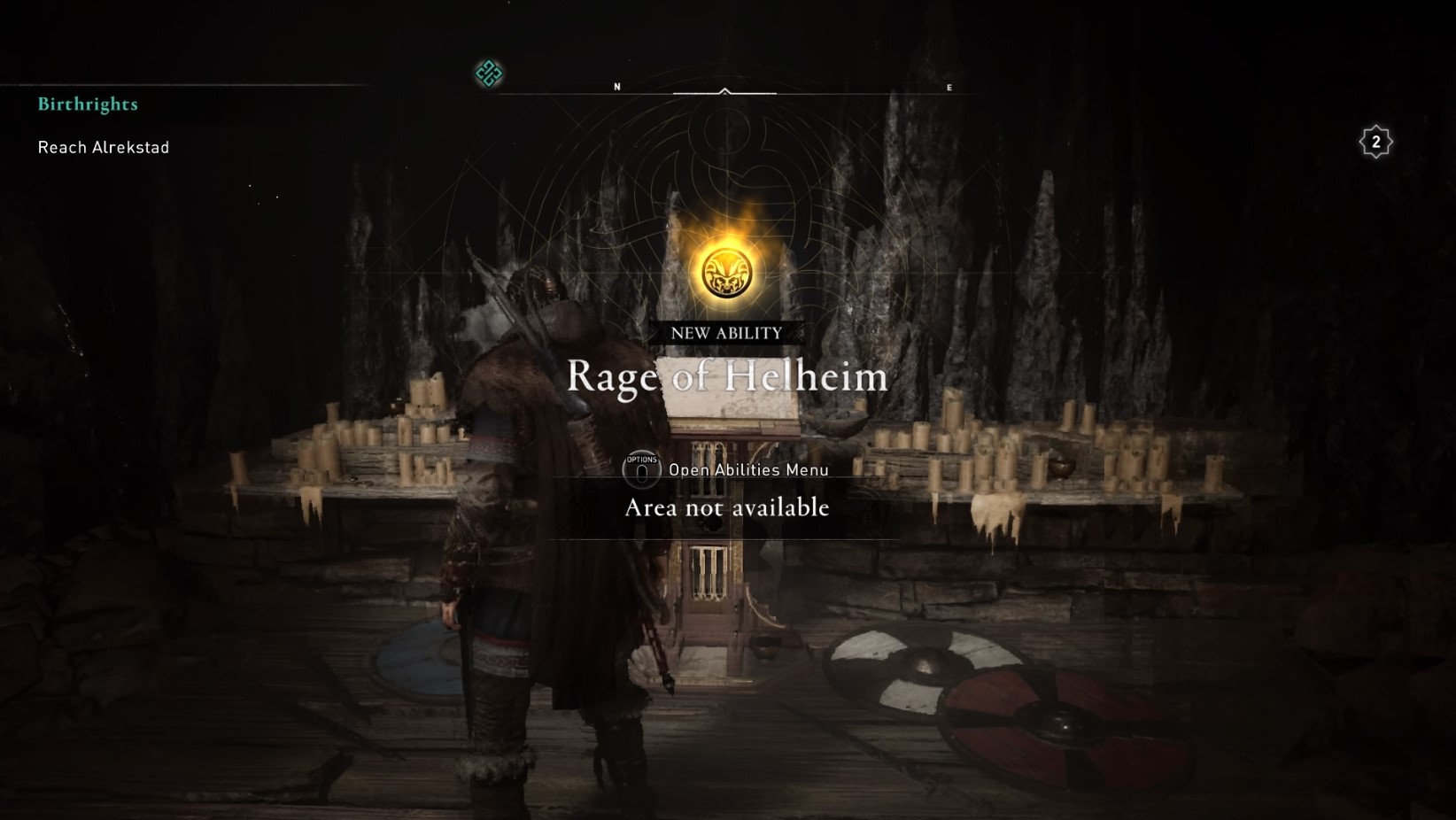 The solitary Book of Knowledge currently accessible in Hordafylke grants the Mark of Death ability. It is found in the town of Alrekstad. 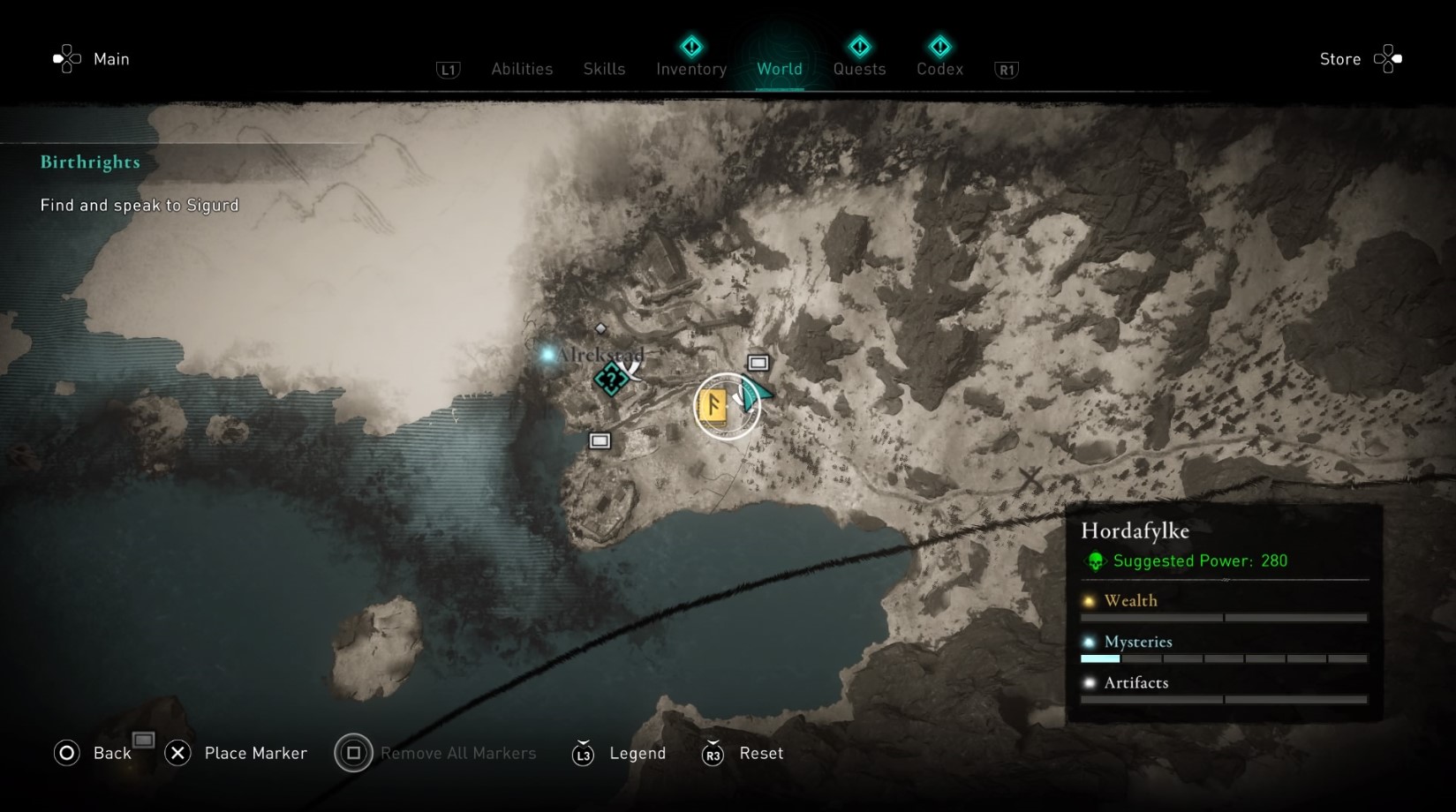 Pinpoint its location with Odin's Sight, then grab the key from the nearby pig sty. 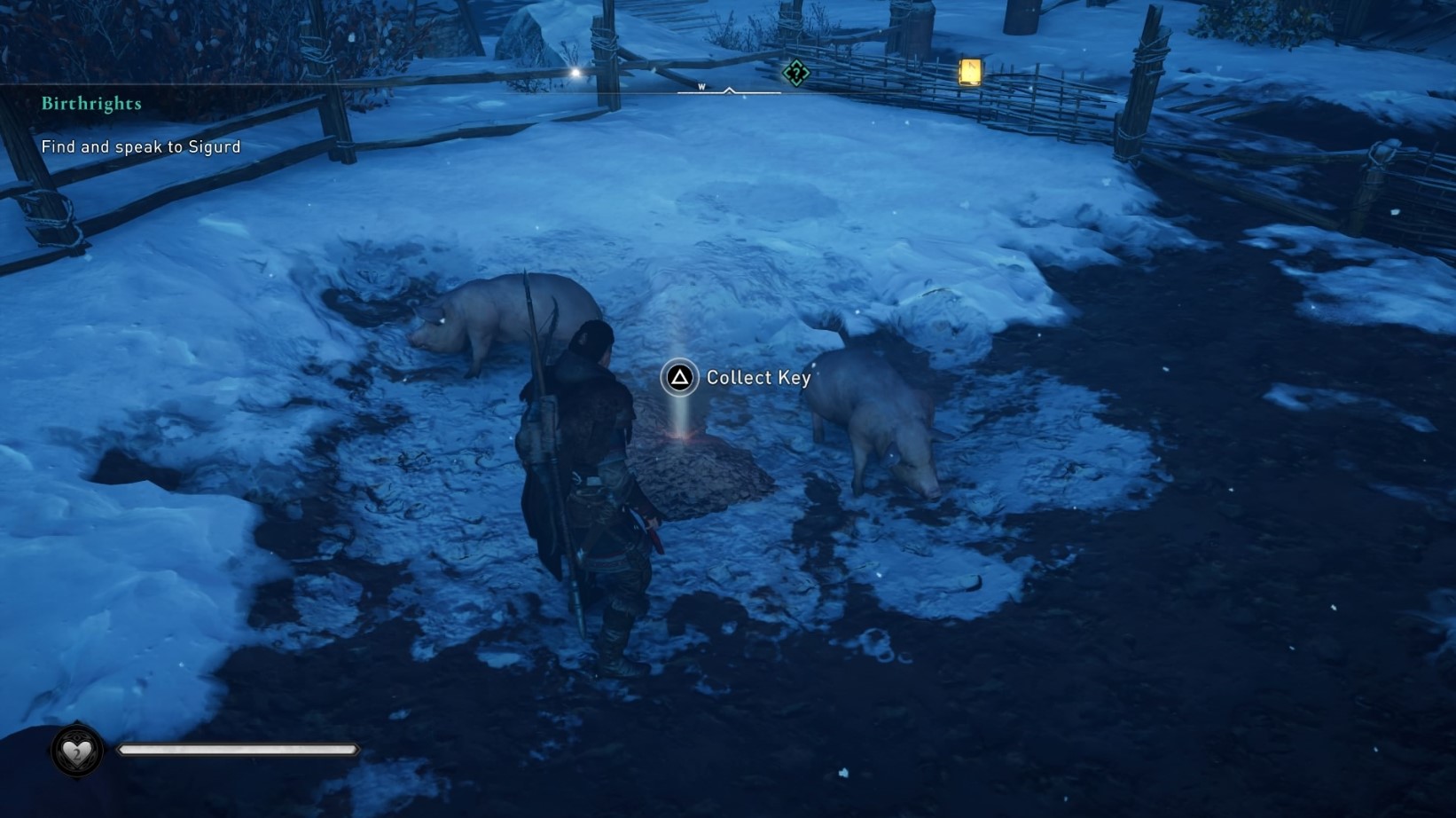 Back towards the nearby road is a netful of crates hanging over a hole. Shoot the clasp holding the net together, then drop through the hole. 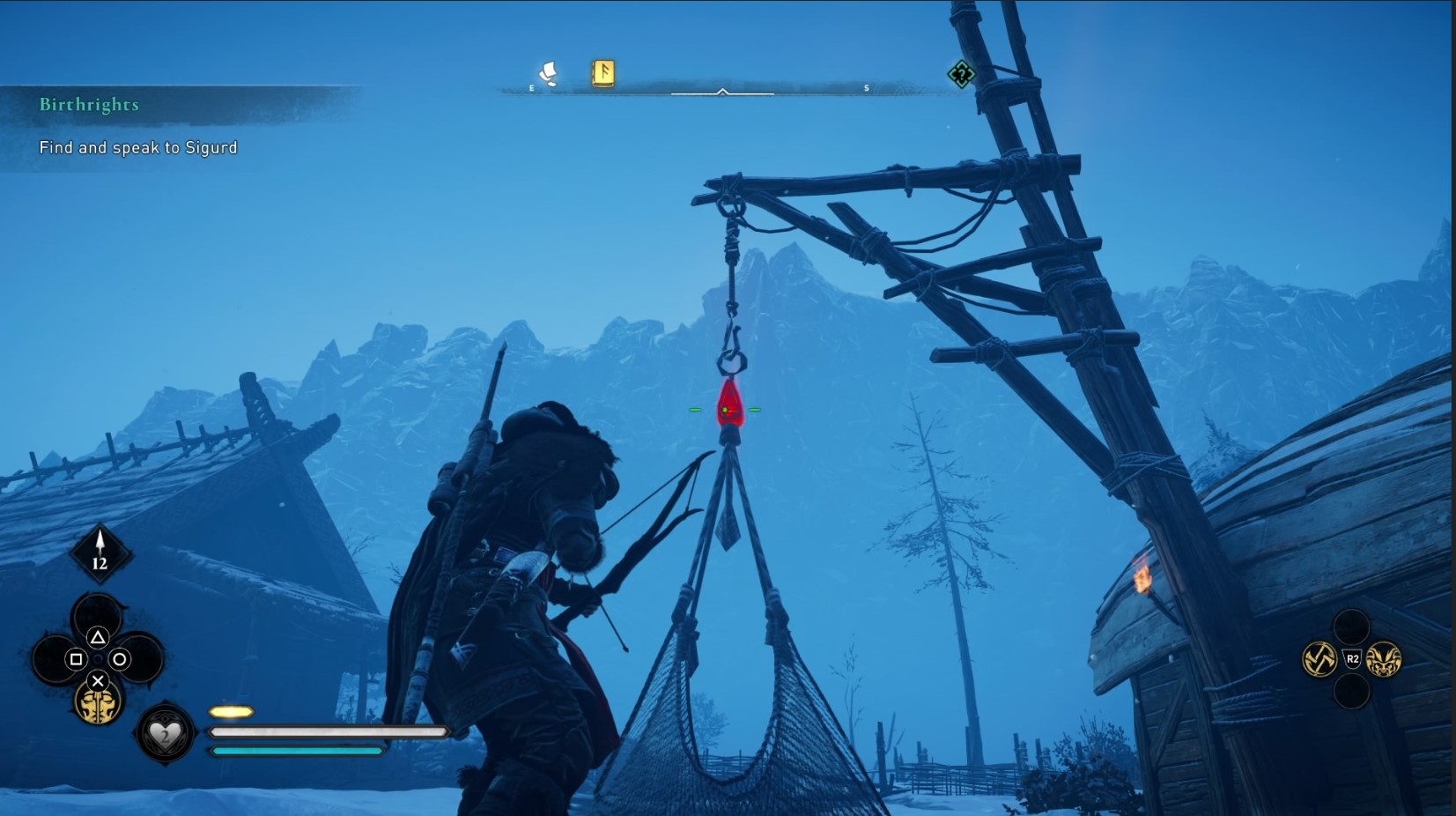 You should now be in a corridor with a locked door at the end. Open it with the pig sty key, then grab the Mark of Death Book of Knowledge.

There are four Books of Knowledge in Grantebridgescire: 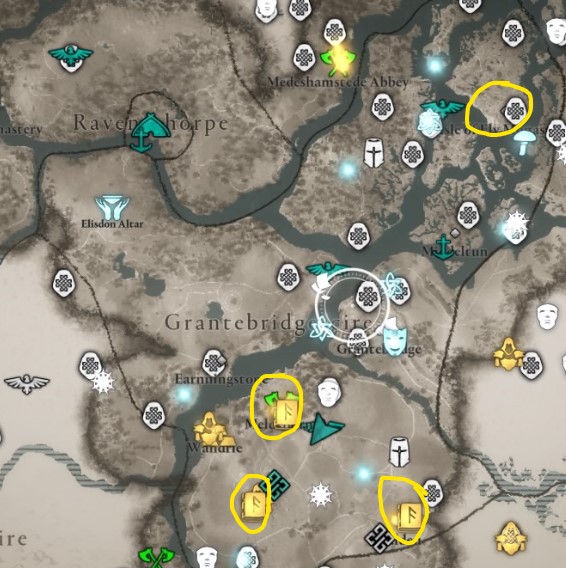 Dive of the Valkyries can be found at the Isle of Ely Monastery in the northeast.

The Mark of Death book can be found within the Meldeburne Monastery, towards the centre of the southern half of the region, near the river.

The final two books are located towards the region's southern edge: Rush & Bash in the south-west, Incendiary Powder Trap in the south-east.

Of the four Books of Knowledge in Ledecestrescire, all on or near the region's borders: 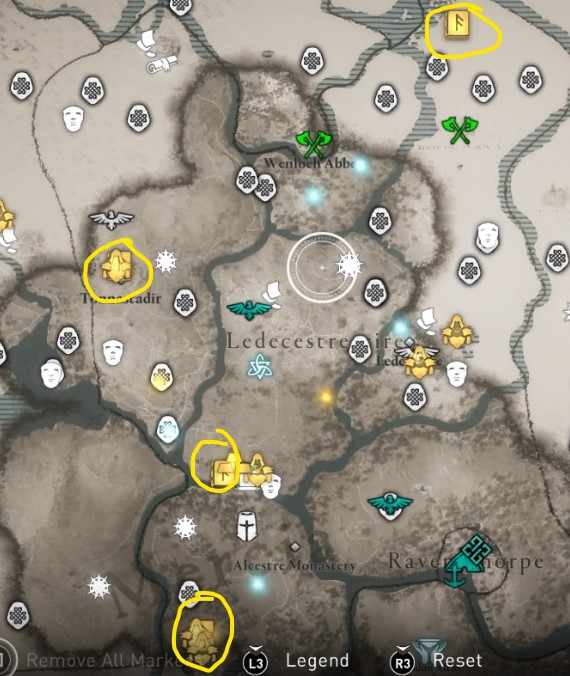 In the extreme north of the region, you'll find a Book of Knowledge for the Piercing Shot ability.

On the southern border you'll find the Focus of the Nornir.

The final two are on the western edge of the region. Raven Distraction is further to the north, in the town of Tonnastadir; Harpoon Impalement is further south, almost directly above the location of the Focus of the Nornir.

All three East Anglia Books of Knowledge are near the coast, on the eastern border of the kingdom. Descending from north to south on the map, they are: 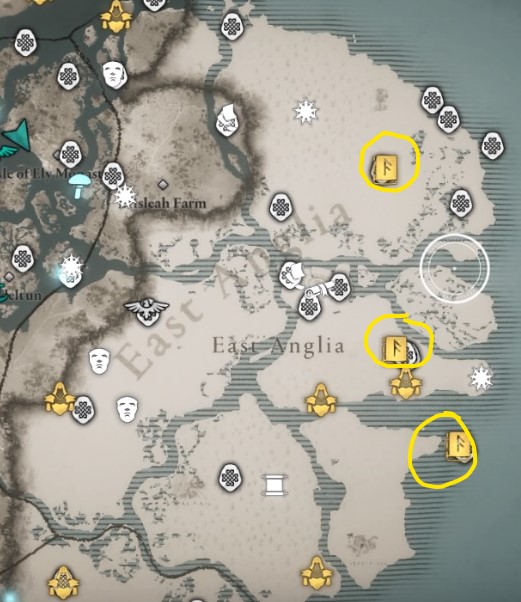 There are three Books of Knowledge in Oxenefordscire, all in the southern part of the region: 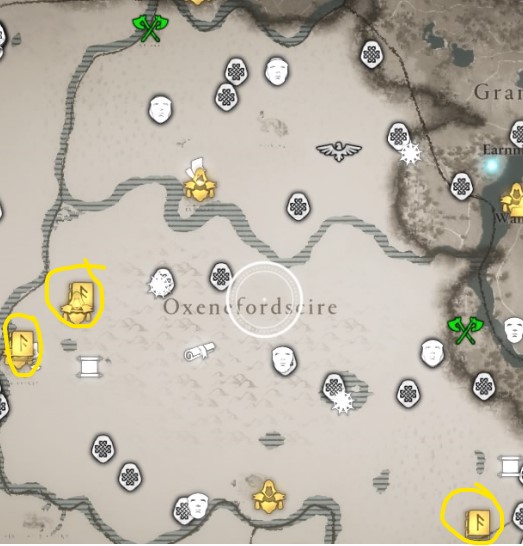 Man's Best Friend is in the south-east of the region.

The two Cent Books of Knowledge couldn't be further apart. Dive of the Valkyries is in the extreme northwest, while Thorn of Slumber is on the eastern coast. 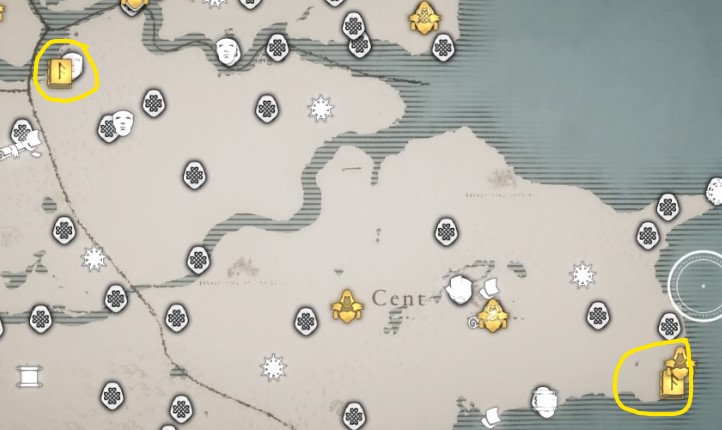 There are just two Books of Knowledge in Essexe, clustered around the middle of the kingdom.

Harpoon Impalement can be found in the more northerly location, while Raven Distraction can be found further to the south.

The two Books of Knowledge in Suthsexe are towards the northern border with Lunden.

In the north-west of the region you'll find Blinding Rush. Meanwhile, Incendiary Powder Trap can be found on an island in the river.

There's only one Book of Knowledge in Sciropescire - Throwing Axe Fury - which can be found out to the west of the region. 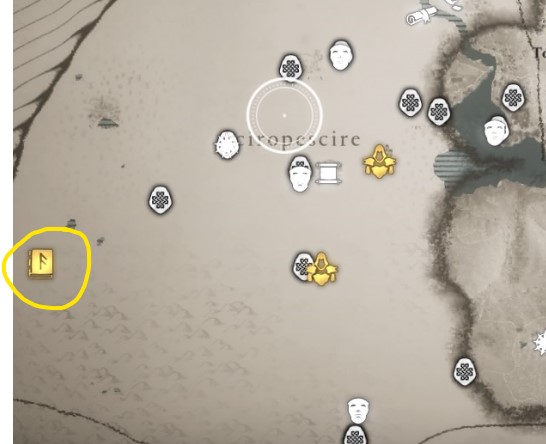 Lincolnscire has two Books of Knowledge to collect, both located towards the centre of the region.

Piercing Shot is in the city of Lincoln itself, further towards the eastern border. Focus of the Nornir is inside Bolingbroc Castle to the west. 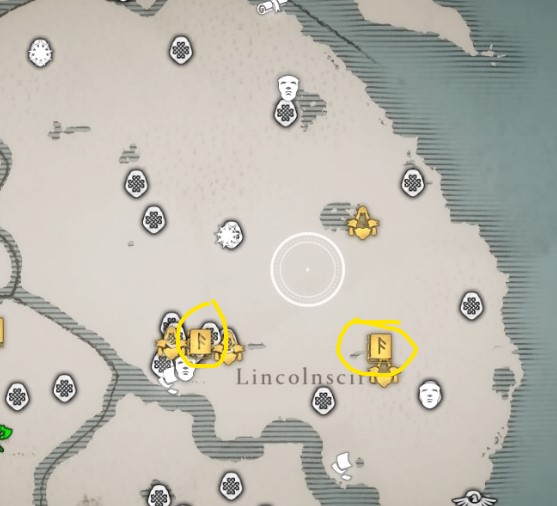 There's are three Books of Knowledge in Eurvicscire:

There is one Book of Knowledge in the city of Jorvik itself: Rage of Helheim.

The remaining two are out east, both near the banks of the river Humber. Of these, Poisonous Powder Trap is located further south-west, with Kick of Tyr north-east of it.

The two Books of Knowledge in Glowecestrescire are both towards the middle of the region.

Vengeance of Thor is further towards the south-west, while Feign Death is more central and closer to the area's northern border. 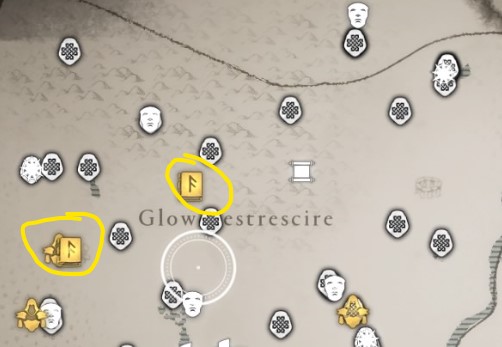 There's only one Book of Knowledge in Wincestre, on the southwestern side of the region. It grants the Axe Blizzard ability. 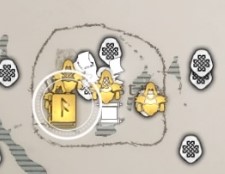 And finally, there are two Books of Knowledge to be found in Snotinghamscire.

In the northwest of the area you can find a Book of Knowledge for the Poisonous Powder Trap ability. 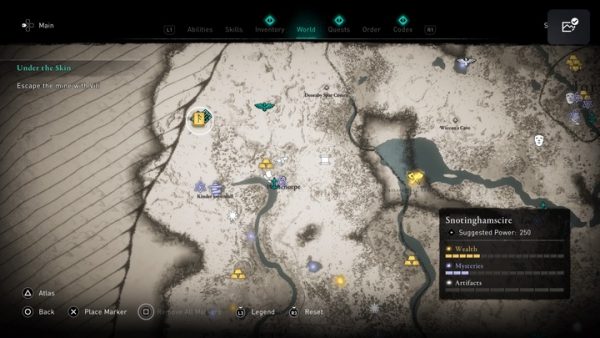 This Book of Knowledge can be found inside Odin's Mine, a heavily guarded hideout. 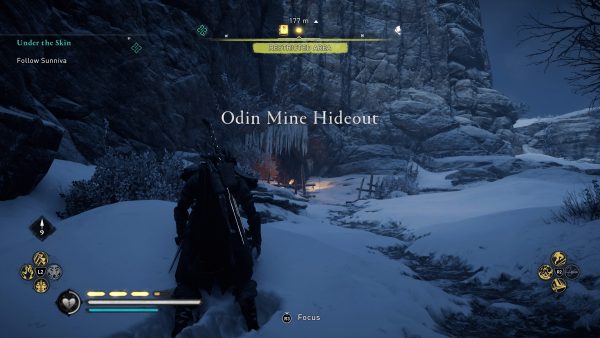 The book itself is hidden behind a series of obstacles — you'll need to explode the breakable wall, climb the wooden scaffolding exposed behind it, and finally use an arrow to destroy the ice wall in order to claim this ability. 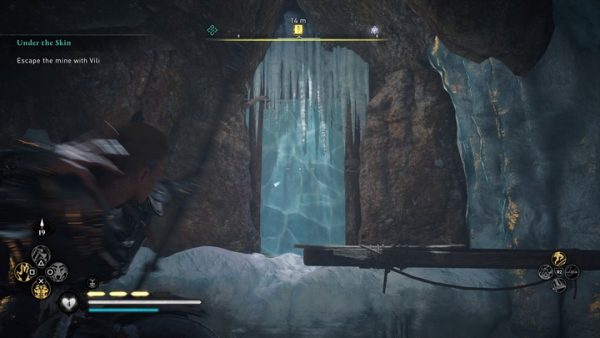 And towards the south of the area is a Book of Knowledge for the Kick of Tyr ability. 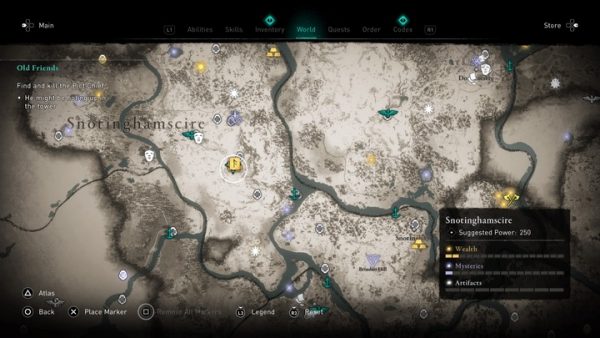 This book can be found inside Ulkerthorpe Fort — which, just like Odin's Mine, is crawling with enemies. 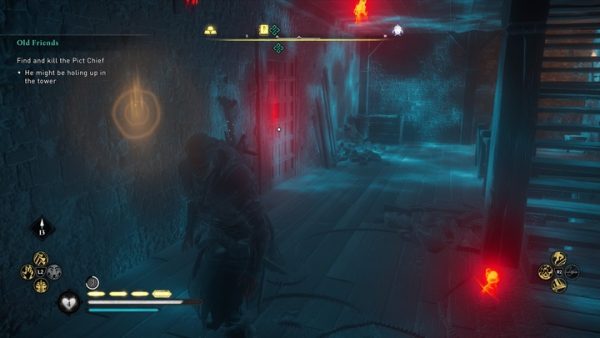 You can find the book inside one of the fort's towers. Above a black banner is the window you'll need to climb through; the book is just inside the room. 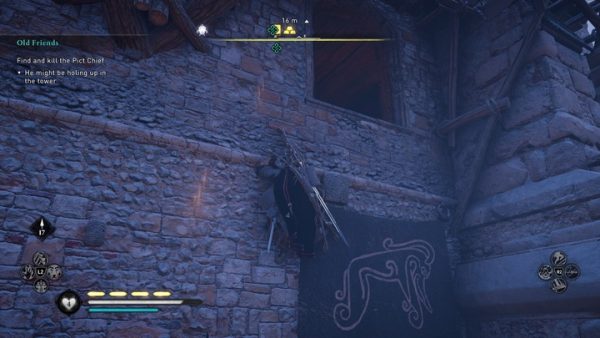 Ravensthorpe abilities: how to unlock them

Eagle-eyed readers might have picked up on the fact that there are only 35 Books of Knowledge in Assassin's Creed Valhalla, which doesn't quite cover all 44 ability ranks.

That's because there are four abilities that aren't gained through Books of Knowledge at all; and one which only has a single associated Book of Knowledge, with the other rank being unlocked through a different method.

To gain access to these abilities, you'll need to visit your main settlement of Ravensthorpe — an area of the map which notably does not contain any Books of Knowledge. 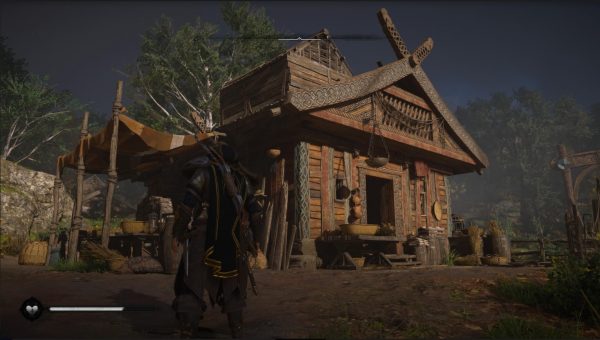 All of the Strike abilities, including their Rank 2 upgrades, are unlocked by killing members of the Order of the Ancients, looting their Order Medallions, and delivering said medallions to Hytham at his house in Ravensthorpe. Around five medallions should net you a new ability, though the exact numbers can vary slightly.

Meanwhile, you unlock a rank of Man's Best Friend by completing the quest "A Little Problem", which is given to you by Knud, a child who lives in Ravensthorpe. Help Knud with his problem and he'll reward you with this ability.

Note that you can complete "A Little Problem" before or after you find the Book of Knowledge for the other half of the ability; it really doesn't matter, as completing the quest can unlock either the base ability or the upgrade just like a Book of Knowledge would.

For more on Assassin's Creed Valhalla, check out our run-down of the best skills, and best early game weapons.