CD Projekt Red has shared the exact times you’ll be able to start pre-loading – and playing – Cyberpunk 2077 when it launches later this week.

Cyberpunk 2077 developer CD Projekt Red has revealed on Twitter just when you’ll be able to start downloading and booting up the game on various platforms.

If you want to play the title on Xbox One or PS4 (or play via backwards compatibility on Xbox Series S/X or PS5), the game will be available in your time zone at midnight on December 10. The game, apparently, runs pretty well on last-gen machines.

At the time of writing, Cyberpunk 2077 preloads have already begun on Xbox One and Xbox Series X/S – but you’ll have to wait until Tuesday, December 8 until you can preload on PS4 and PS5.

PC and Google Stadia players will be able to access the title simultaneously around the world from December 9 at 4pm PT / 7pm ET, and 12am GMT on December 10.

Those wanting to pre-load on Steam and Epic Games Store will need to wait until 8am PT/11am ET/5pm CET.

The game is expected to take up to about 70GB of space on PC, with console download sizes probably ending up in the same sort-of area.

If you’ve managed to get the game ahead of time, watch out: Cyberpunk 2077 streams and Let’s Plays will be taken down ahead of release. 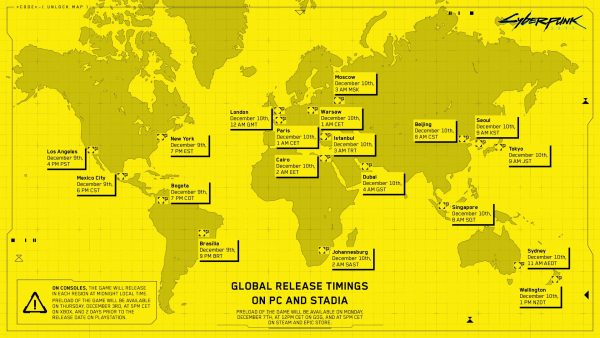